Wilson's "Just Take Away Their Guns"

Gun control is a subject that is being debated and will continue to be debated for years to come. There are many different views of what causes crime. Some say crimes caused by guns and others say that it is the people behind the guns. In James Q. Wilson’s essay entitled “Just Take Away Their Guns”, he tries to propose some solutions that would solve the gun control debate. Of course, every plan of action is going to have it’s drawbacks, and Wilson’s has some major ones.

Don't use plagiarized sources. Get your custom essay on
“ Wilson’s “Just Take Away Their Guns” ”
Get custom paper
NEW! smart matching with writer

. Wilson’s plan to train police officers to be able to spot would be gun carriers more easily, arming the police with hi-tech weapon detectors, , and letting the police keep the authority to “pat down” people suspected with reasonable-suspicion would have too many negative effects to even consider enforcing in the United States. The first part of Wilson’s plan is to train police to be able to spot people that look like they are carrying guns.

I know many people that carry guns that probably would be stopped because of the way they look. They look like your everyday, average American teenager. I doubt very seriously that a police officer, even with rigorous training, could pick someone out of a crowd that was carrying a gun. If police forces employed this tactic, how would they stop the constant harassment to one person?

If police do find guns on a person that looks a certain way, do you stop everyone that looks like that? I do not think so. If they did that, then they would have certain groups getting stopped all of the time. Imagine someone walking down the street with some of their friends and you get stopped four times in two miles of walking? How would that make you feel? It would not make me feel real good. I would be angry at the police because I was not doing anything wrong and I was getting punished for it. One way of preventing this from happening is to do one of Wilson’s solution, perfect a metal detector that police officers could carry around with them.

This would stop the unlawful, harassing, demoralizing searches that would happen every day. The police officers could just aim the detector at the individual and tell if they had a big hunk of metal in their pocket. If they detected enough metal on someone, then that gives them reasonable suspicion to stop someone. How can anyone make a stop on reasonable suspicion by the way someone looks? Again, no one has the ability to tell that a gun is present in a group of people. Overall, I believe that Wilson’s essay presents both sides of the issue very well. He argues both sides of the point and provides some solutions to the problem. His solutions, in my opinion, are on the right track, but they have a lot of room for improvement. Something needs to be done about criminals getting guns, but it should not infringe on certain group’s rights just so a few more people carrying guns may be caught.

Wilson's "Just Take Away Their Guns". (2020, Jun 02). Retrieved from http://studymoose.com/q-wilsons-just-take-away-their-guns-new-essay 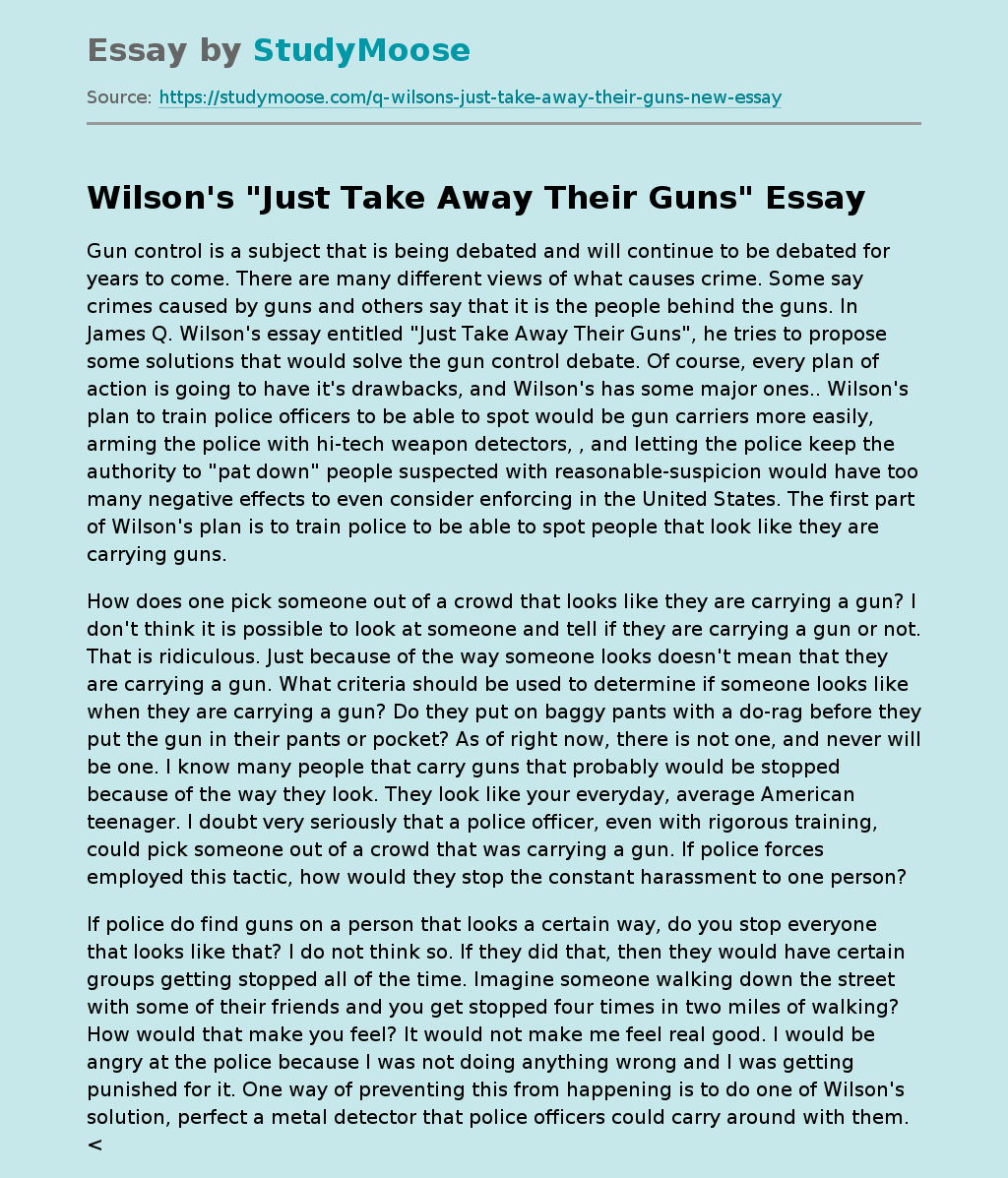