Algeria is home to millions of people, including those of all faiths. As one of North Africa’s leading military powers, our government swore to protect the people of Algeria. However, the recent encroachment of the ISIL group throughout much of Syria and Iraq has caused major concerns throughout the international community. ISIL is growing stronger everyday, and they have been encouraging jihad towards western countries. It is the duty of Algeria to ensure the safety of our citizens, and action must be taken to destroy this cancer.

Recently, the self-proclaimed Jund Al-Khilafah in Syria group has executed a French citizen. Algeria feels strongly against jihad. It is a shame that Algerian men who have been blinded by ISIL were involved in such an incident. Algeria takes a firm stance against the actions undertaken by ISIL. Algeria has been building strong relationships with many of its European neighbors to the north. The implementation of the European Neighborhood Policy has resulted in us developing closer ties to many European powers.

We stand by our European allies in these dangerous times.

However, Algeria is not yet ready to commit military resources towards directly fighting ISIS. Algeria must deal with domestic terrorism issues first before going through with any plan to fight ISIS. Even though these domestic terrorist groups have pledged allegiance to Abu Bakr Al-Baghdadi, Algeria has built up a military capable of defending its people. We have the second strongest military in North Africa, and we maintain arms deals with European powers.

We have a standing army of about 150,000 soldiers, with another 150,000 in reserve. Algeria also has multiple paramilitary wings, including approximately 200,000 additional personnel.

We are capable of joining the international coalition in airstrikes against Syria due to our deals with Russia. Russia, throughout the years, has sold us multiple bombers and fighter jets, allowing us to hit ground targets from above. There is no question that Algeria would be capable of defending us from the clutches of ISIL. While Algeria is capable to launching airstrikes on ISIS targets along with the international community, to join the coalition in airstrikes against the ISIL threat is still a premature move. Our primary concern is the safety of our citizens, and we do not wish to aggravate a hornet nest. Note: I apologize for it being less than two pages. 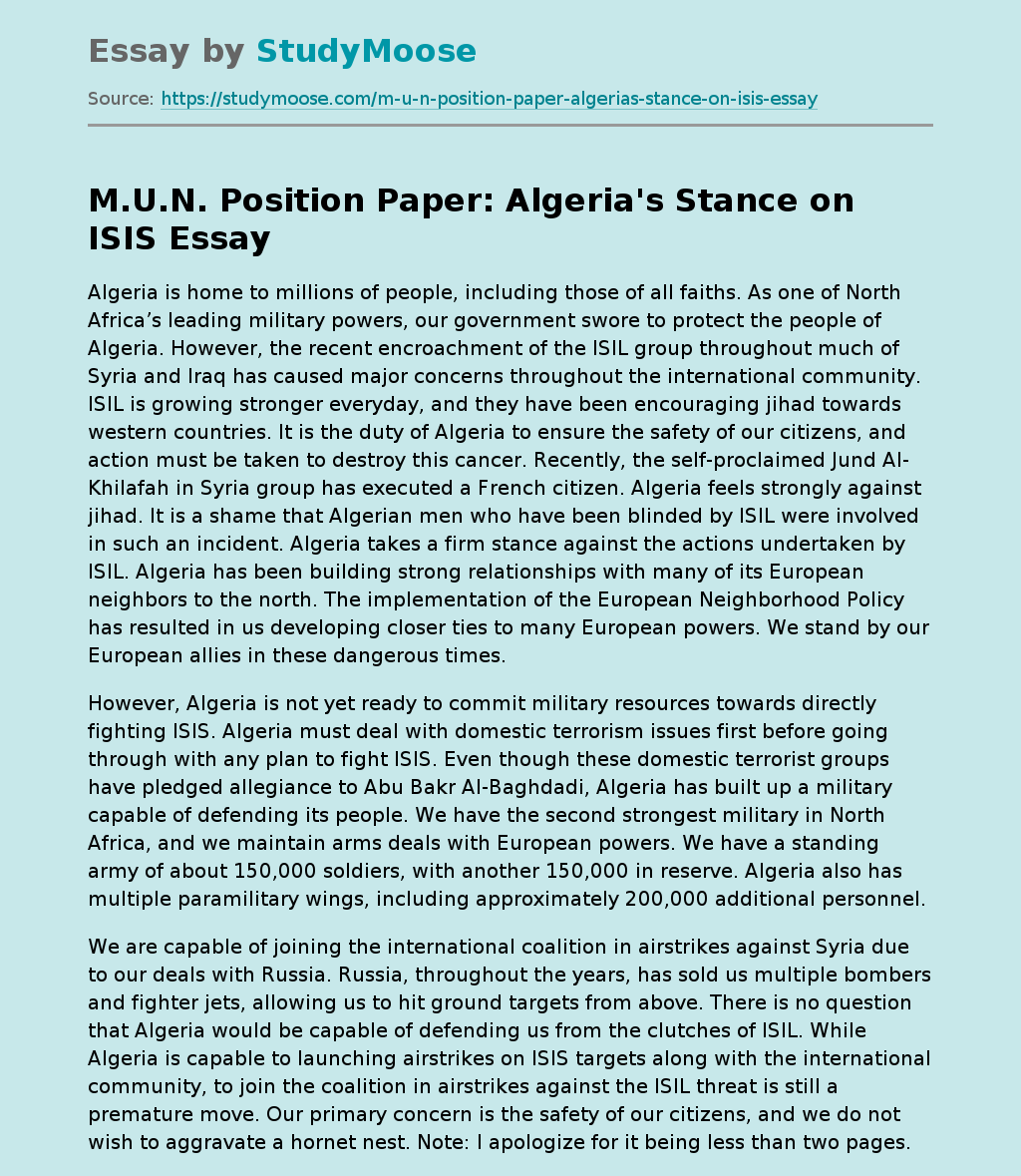