Harry Truman was a realistic, pragmatic president who skillfully led the American people against the menace posed by the Soviet Union. Assess the validity of this statement by examining the Foreign Policy implemented during Truman’s presidency. At the end of the Second World War two major issues were brought to attention. The first was dealing with the destruction of the global catastrophe. The second issue involved the shape of the new world and what political alliances were to be made.

Don't use plagiarized sources. Get your custom essay on
“ Harry Truman ”
Get custom paper
NEW! smart matching with writer

And although the U. S. nd Russia were “allies” during the war the second issue was the foremost cause of the contention between the world’s two political/economic systems, Capitalism and Communism. The Cold War was basically an ideological catch-22 in which the U. S. was caught up in, mostly because of the actions taken by the Federal government and the chief executive, Harry S. Truman. Up until Truman’s speech to Congress in 1947, the most powerful influence on American foreign policy had been the Monroe Doctrine, a policy by President Monroe that proposed America ought to keep out of European affairs.

The Truman Doctrine completely overturned the Monroe Doctrine. The Soviet Union viewed the actions taken during Truman’s administration as further threats of American imperialism. Truman’s Foreign Policy reflected an entirely interventionist attitude with the implementation of the Truman Doctrine, the crisis in Berlin, and NATO. Therefore the statement is primarily invalid. In 1947 Communist insurgents threatened to take over both Greece and Turkey, but England could no longer support them.

So in a speech before Congress in which he asked for $400 million in aid to the two countries, Truman asserted that it must be the policy of the United States to support free peoples who are resisting attempted subjugation by armed minorities or outside pressures. Truman’s statement became the basis for the larger policy, developed by George Kennan, called containment. This idea said that the United States would not instigate a war with the Soviet Union but would come to the defense of countries in danger of Soviet takeover.

The policy pretty much aimed to prevent the spread of communism and encourage the Soviets to abandon their struggle for power. However, such a policy is quite seemingly contradictory. Is it really possible to not instigate conflict when you’re aiding one side and not the other? The same happened with America’s entrance into WWII, the only way to truly prevent any type of conflict is to not be involved or if there must be any involvement due to economic/political ties, it must be done unbiased.

Just as America feared the Soviet threat, the Soviets’ point of view also characterized American Capitalism as threatening, therefore increasing the tensions between the two powerful nations. In 1945 Germany was divided into four sectors as well as Berlin. Upon learning that the three allies were planning to merge their sectors into one country and bring it into the Western economy, the Soviet Union imposed a blockade on Berlin. The Berlin crisis forced Truman to consider the possibility of war, and if it came, whether or not atomic weapons would be used.

Another difficult question arose as it needed to be decided whether the bomb would be under military or civilian control. Thus the Atomic Energy Commission was created in order to control these destructive weapons during both peace and wartime. Civilian control over such weapons was widely feared because of the possibility of Soviet spies getting intelligence on American activities. In 1946 Truman sent Bernard Baruch to make recommendations to the United Nations.

He suggested that the US would dominate any international atomic agency and the Soviets countered with a proposal calling for the destruction of all nuclear bombs and a ban on their use. But the Truman administration never considered giving up the American nuclear monopoly pushing Stalin to focus whole-heartedly on the Soviet atomic bomb project. In 1949 the US formed a mutual defense alliance with Western Europe called the North Atlantic Treaty Organization. Truman had a hard time convincing Congress that this organization was necessary on account of American sentiment previously being avoidant of entangling alliances.

The NATO charter pledged that an attack on one of the member nations constituted an attack on all of the members. Stalin’s aggressive actions at Berlin accelerated the American effort to use military means to contain communism. So the implementation of this alliance represented Truman’s willingness to disregard the tradition of neutrality. The Soviets also create an alliance called the Warsaw Pact countries that had the equivalent ambitions as the North Atlantic Treaty Organization.

Many of the policies implemented during Truman’s administration were provoking in the minds of the Soviets. And Americans would have probably been less fearful if President Truman hadn’t emphasized Communism as such a big threat. He installed fear in the minds of the citizens and other officials. Maybe not a fear of any tangible threat communism posed but the simple idea of being taken over, from abroad and within. Desperate times do call for desperate measures, but those measures taken should be in the best interests of those among the masses. 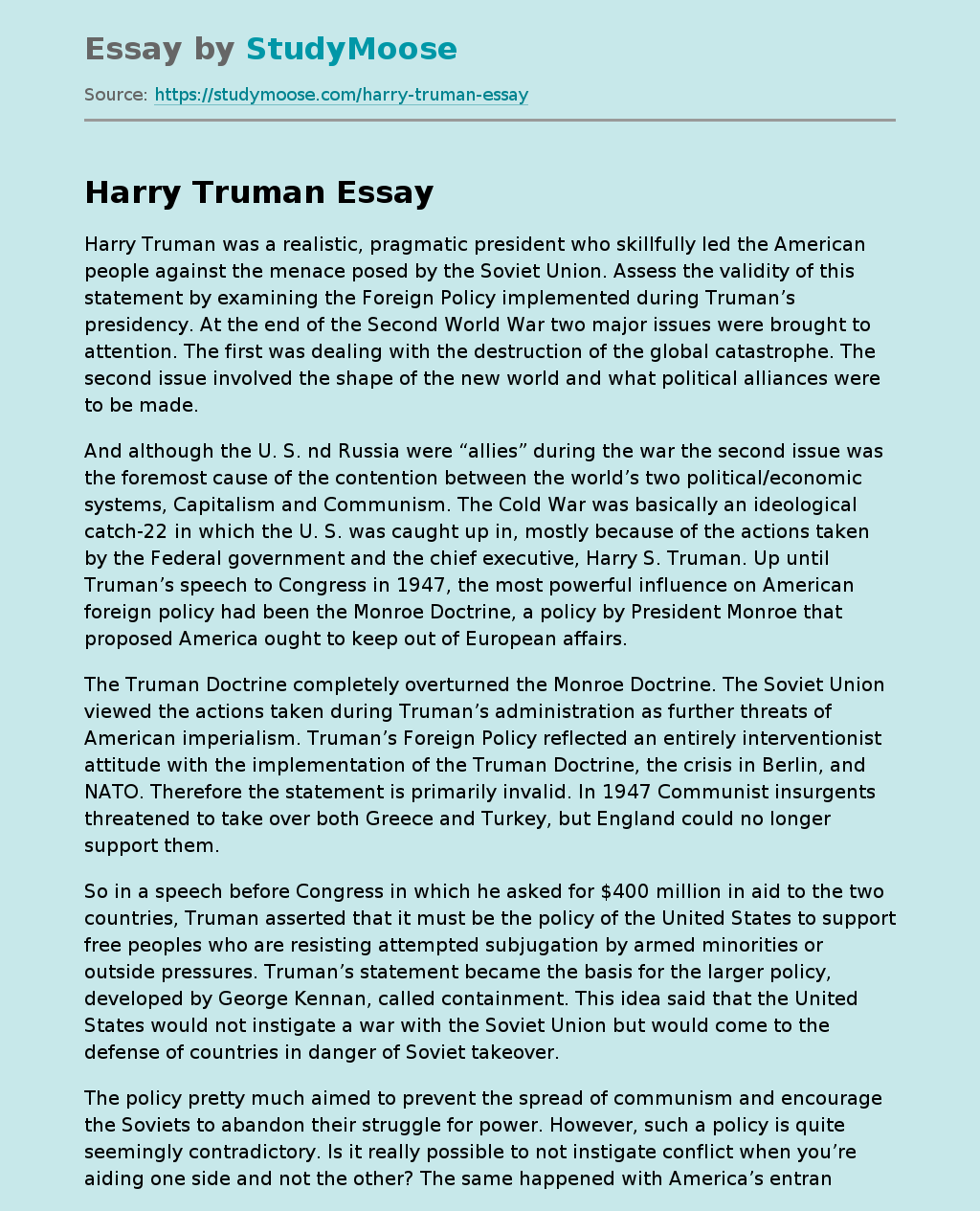