"Gift Of The Magi" And "The Necklace"

The two short stories, “The gift of the Magi” written by O. Henry and “The necklace written by Guy de Maupassant are both composed of two young, beautiful women Mathilde and Della. Even though they are in different composed stories that have similar characteristics that convey throughout the story such as, they are both emotionally and financially depressed, have loving husbands, and both want to achieve something in an extreme manner. Throughout much the stories there similarities interact with each other, however there differences shine as strong as there will to survive through the depths of life.

Turn in your highest-quality paper
Get a qualified writer to help you with
“ “Gift Of The Magi” And “The Necklace” ”
Get high-quality paper
NEW! AI matching with writer

For example, Mathilde expresses her repetitive unappreciative remarks on life little pleasures. “She grieved over the shabbiness of her apartment, the dinginess of the walls, the worn-out appearance of the chairs, the ugliness of the draperies” is an example of recessive comments in which she complains that she should be treated like gold (de Maupassant 202). Her comments create the fact that her caliber of royalty should not be mistreated.

Proficient in: The Gift of the Magi

Though she lives in a filthy cottage, which she calls home. Her emotions on life have gone in a realty world where she should be treated like a king. Her envies of better quality life style have turned into a disease, where she must have the finest jewels, tapestries in the world. Her cravings of excessive attention have made her gone into a state of addiction. Mme. Loisel was greedy, dishonest, and did not love her husband. She was a huge complainer who was always looking for attention, and often used people.

In addition, Mathilde Loisel is a character that has much pride in her. It is her motivation to act throughout the story, and it is the key to her downfall. Mathilde downfall comes into place when she does not tell Mrs. Forrestier that she lost her necklace. Mathilde does not gush out confessions and prostrating herself while pleading for forgiveness, she takes the responsibility for her mistakes by replacing Mrs. Forrestier’s necklace. De Maupassant shows her qualities in the introduction, the incident, and the poverty she endures. At the beginning of the story Mathilde pride is so strong that she does not want to face reality. Reality meaning the husband she has and the small household she resumes in. So in order to reject reality she turns to her dreams in which she has the life of ease and riches. Pride comes to place when she is complaining to her husband about the way hey live and how she deserves more than this. When they discover that they have been invited to a big party, she feels she must live up to her pride.

Knowing without a doubt that they have no money, she wants to have a beautiful dress and along with the dress she gets a radiant necklace from Mrs. Forrestier. The incident in which Mathilde loses the necklace plays an active role in Mathlide’s pride. Mathilde refuses to endure embarrassment by telling Mrs. Forrestier that she lost her necklace, so she goes and replaces the necklace. Her pride will not let her stoop so low into apologizing, pleading for forgiveness for nothing, instead her pride tells her that she is capable of replacing the necklace, and so she does. Her pride dreadfully leads her into destitution lifestyle, something she is not most proud of. The reality of her life becomes more realistic than ever. She is plunged into poverty, and drudgery that will take away her prized youth and beauty, never to return, but yet she still has her pride.

At the end after all the debts are all paid, she sees Mrs. Forrestier, who by the way does not recognize her, tells her about the incident and what she had to do to pay the money, and discovers that the necklace was nothing more than a fake. Mathilde is a character that has a pride so strong that she doesn’t notice until her pride hits her with retribution, by leading her to poverty. She sees her responsibility for losing the necklace, and she had enough sense of self-sacrifice to pay for restoring it. She sacrifices “with pride” not only her position, but also her youth and beauty. Pride plays a crucial role in Mathilde life, role that stands strong and proud, but yet its so crucial that it drives Mathlide’s fate. Furthermore, Mathilde had begun to change. Physically, “she had become the strong, hard, rude, woman of poor households. ” (209).

But also there was a change on the inside, too. Sometimes she still sat and thought about her moment of glory and then thought about what her life would have been like if she would have never lost the necklace. She realized that her selfishness and desire to be “on top” had caused her to experience the major down fall that she did. She also realized that she was at rock bottom now, her and her husband both, and she had put them there. A Mathilde dream of unattainable wealth and comfort yet, fails to see that her dream life ends up harming her real life. Maupassant does and excellent job of showing the transformation of Mathilde’s character from a person who is selfish and ungrateful to a person who realizes that her mistakes and pays for it the rest of her life. Even though the story is fiction, Maupassant has made it believable and lifelike. Someone reading this story could benefit greatly from it. We all must deal with selfishness at some point in our lives. Why not learn from other people’s mistakes, fiction or not.

On the other hand, Della is a thoughtful person, sacrificed their most prized possessions for one another. They did this in order to buy each other nice Christmas presents. Della’s most prized possession was her beautiful hair that she cut off and sold for the money. For example, she uses her time and patience to give a thoughtful present to her loving husband. She is very much appreciative of her husband and is willing to accept him as her confidence and with this time of financial depression she uses him as a guide through the dark times and does not complain at all (203-204). Also, Della does the imaginable by cutting her long, beautiful hair to please her husband so that he can have a Christmas to remember (203).

She is a person who will not let a little downfall get in her way for her husband and her to a have a wonderful and joyous celebration. She a not a selfish person, instead she is magnanimous, and considerate to the fullest extent. Even though her beauty is lost, she gained love and compassionate feeling from her husband, and it what counts more than gifts. Finally, Della is chivalrous and an honorable being. Instead uses all her might and strength to create the best Christmas ever. Lately, she is much deprived of many of her daily things, however her cutting her hair makes her to care for her husband more than she cares for herself. She would rather have her husband have a Merry Christmas, likewise for the husband.

In conclusion, the short stories, “The Gift of the Magi” and “The Necklace”, deal with two women’s struggles to make someone else happy and how fulfilling your own wants can hurt you. The difference between these stories is how when push came to shove, the way the characters chose to spend their money. These two interesting and ironic stories revolve around one main character. They both try to make their lives or someone else’s life better by using money.

"Gift Of The Magi" And "The Necklace". (2016, Jul 15). Retrieved from https://studymoose.com/gift-of-the-magi-and-the-necklace-essay 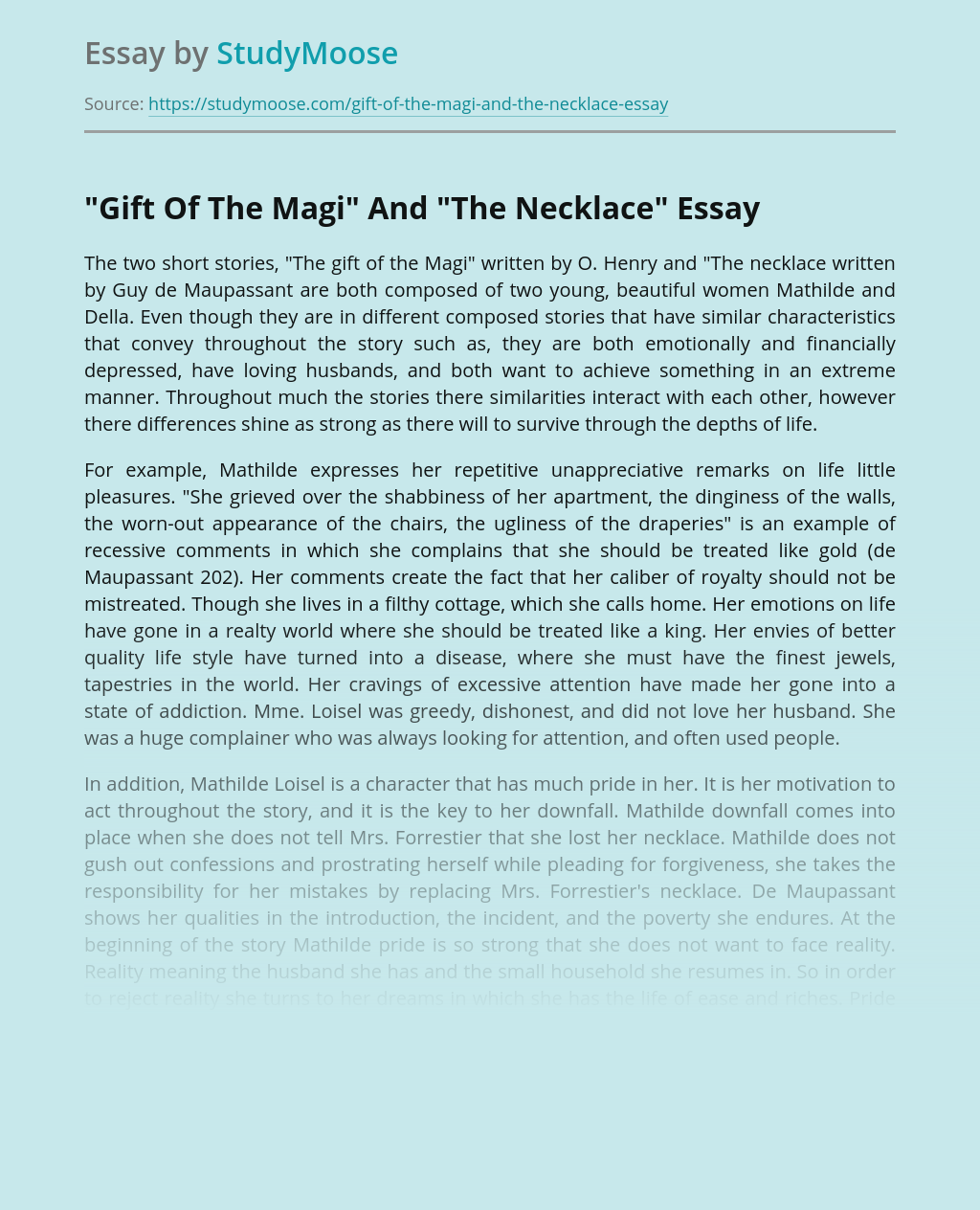 Turn in your highest-quality paper
Get a qualified writer to help you with
“ “Gift Of The Magi” And “The Necklace” ”
Get high-quality paper
Helping students since 2015
Stay Safe, Stay Original