Mauppassant's "The Necklace" outline and paper

In Mauppassant’s story “The Necklace,” two characters find out the hard way that it does not pay to tell a lie. Mathilde Loisel is a discontent woman who often fantasizes about being a rich classy woman. On the other hand, Mr. Loisel, her husband is an easygoing person. Mathilde is presented with an invitation to a formal dinner party, and she starts complaining to her husband that she has nothing to wear. She convinces her husband to buy her a new dress, and she borrows a necklace from a rich friend.

Don't use plagiarized sources. Get your custom essay on
“ Mauppassant’s “The Necklace” outline and paper ”
Get custom paper
NEW! smart matching with writer

Unfortunately, Mathilde loses the necklace before returning home from the dinner party. In Mauppassant’s story “The Necklace,” a necklace causes drastic changes in the character’s lifestyles and environment.

A necklace is the major object in the story’s setting. Mathilde, in an attempt to fit in with the rich classy women borrows a necklace to wear at the dinner party. She picks a very fancy necklace because she wants to be noticed by others.

Proficient in: The Necklace

Mathilde anxiously asks her friend, “Could you lend me this [necklace], nothing but this” (6)? Her friend replies without hesitation, “Why yes, certainly” (6). From this point in the story on, the necklace is the main cause of drastic changes in the character’s actions. With such a strong focus on the necklace, a reader can easily sense the importance of the object. Mathilde, on her way home from the dinner party loses the precious necklace.

This is a major conflict because the couple does not have enough money to replace such a costly item.

Mathilde’s husband says frantically, “I’m going out to retrace all of our steps…see if I can find the necklace that way” (8). Mathilde fails to tell her friend the truth about the necklace. In turn, this causes much unnecessary confusion. She lies to her friend for the sake of her own pride. Mathilde, desperately attempts to buy some more time by writing to her friend, “[I] broke the clasp on [your] necklace and [I’m] having it fixed” (8). After exhausting all other possibilities, Mathilde and her husband agree that they will have to replace the lost necklace.

The lost necklace forces the characters to change their current lifestyles. Buying an identical necklace is going to be a costly expense for the nearly poor couple. Mr.Loisel borrows money from many different people, and he works extra jobs to pay back the loans. He borrows money, “…asking a thousand francs from one, five hundred from another, five louis here, three louis there” (9). Mr. Loisel is bending over backward to correct Mathilde’s mistake. Purchasing a necklace of this sort in their financial condition makes their lives extremely challenging. On top of his normal job, “The husband worked evenings to make fair copies of tradesmen’s accounts, and late into the night he made copies at five cents a page” (9). Because of the necklace, he is forced to work twice as hard and for no reward. Mathillde eventually makes some unconscious changes in her personality because of the necklace. After dismissing the maid, Mathilde becomes very cooperative and begins to take on the heavy housework.

For a prime example, “She washed the dishes…She hand washed the dirty linen, shirts, and dish towels…she took the garbage down to street, and she carried up water, stopping at each floor to catch her breath” (9). The enormous debt caused by the necklace has to be paid, and she is doing everything she can to help. Mathilde swallows her pride, “And, dressed in cheap house dresses, she went to the fruit dealer, the grocer, the butchers, with her basket under her arms, haggling, insulting, defending her measly cash penny by penny” (9). Mathilde is now aware that she must be very cautious when spending money. The necklace is the cause for Mathilde to make such drastic changes.

The characters incur such a heavy loss that they eventually change environments. At the beginning of the story, Mathilde and her husband live in an apartment. By a simple description of their apartment, a reader can easily make a judgment of their financial condition. Mathilde feels inferior to others, “…because of her grim apartment with its drab walls, threadbare furniture, ugly curtains” (4). With their enormous debt form the necklace, they move from their cozy little apartment to a dusty attic flat. To help save money to repay their debts, “They dismissed the maid; they changed their address; they rented an attic flat” (9). This cut down on many of their expenses so that they could directly pay off the tremendous debt. Mathilde often complains about the apartment, but after they move, “[She discovers] the horrible life of the needy” (9). The setting has become even grimmer than before.

The change of environments symbolizes the personality changes of Mathilde. Mathilde, when living in the apartment is very unappreciative. She dreams of being rich and having all the finer things in life, but when they move to the attic flat she is hit with a grim reality. She no longer dreams of being rich because she realizes this is not a possibility. Now, her only dream is to repay the tremendous debt. For example, ” She had become the strong, hard, and rude women of poor households” (9).

The sudden change in environments causes Mathilde to become more thrifty and appreciative of her few assets. After the entire debt has been paid, Mathilde confesses the truth about the necklace to her friend. Her friend is very surprised for two reasons. First, she could not believe that Mathilde would lie over something so simple. Second, the jewelry that Mathilde returns is authentic, but the jewelry that she borrows is only theatre jewelry.

In this story’s setting an object causes drastic changes in the character’s lifestyles and environment. The use of a single object creates all of the story’s conflicts. The creative use of the setting brings out the character’s moral values. A simple lie causes Mathilde and her husband to go into debt and live miserably for ten long years.

Mauppassant's "The Necklace" outline and paper. (2016, Jun 25). Retrieved from https://studymoose.com/mauppassants-the-necklace-outline-and-paper-essay 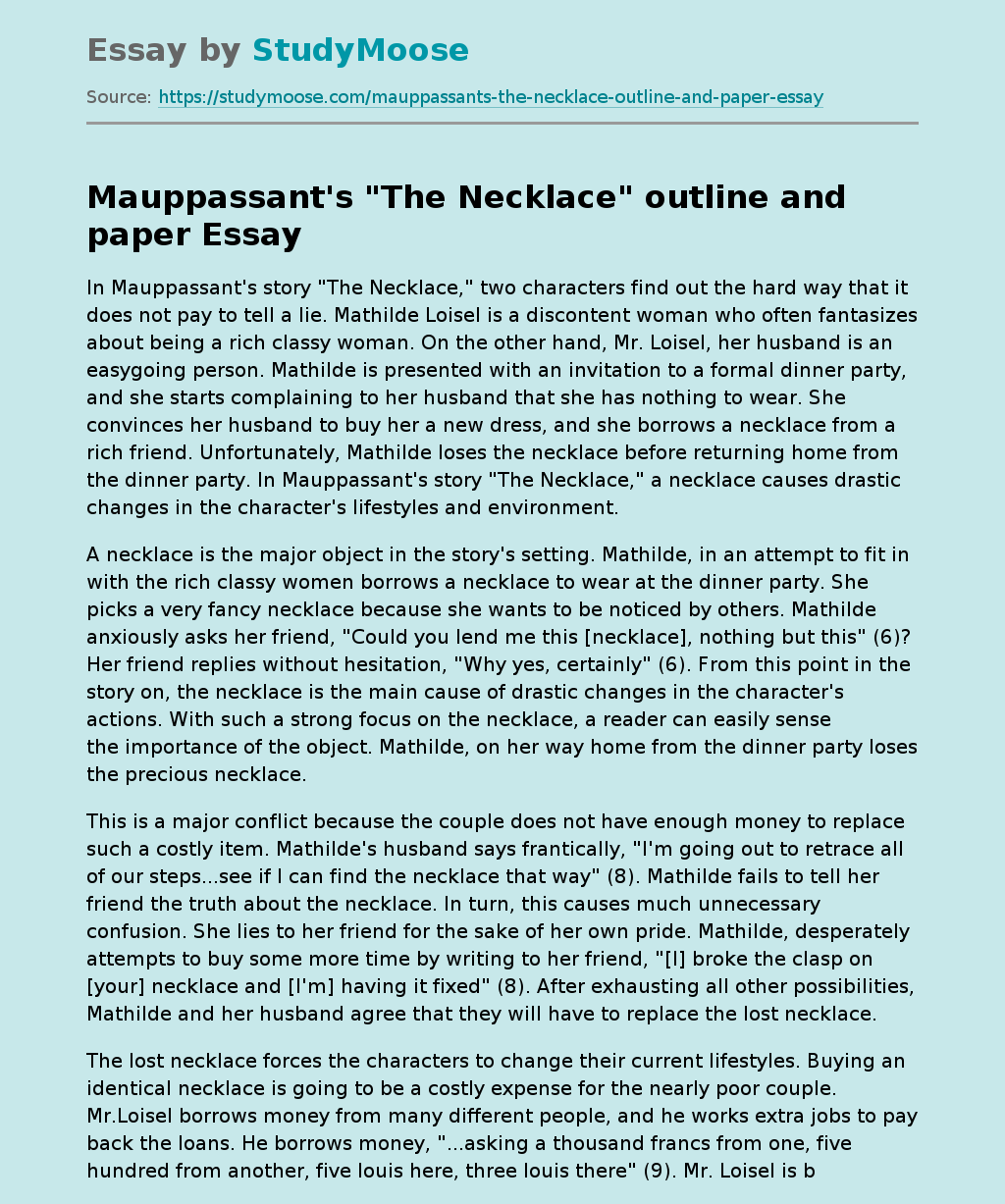