The Short Bus: A Journey beyond Normal

The short Bus: A Journey beyond Normal is a narrative of author Jonathan Mooney’s personal trip across the United States in pursuit of answers with regard to dealing with disability in a prejudiced society.  The memoir is written in the first person point of view in order to make the author’s intentions more heart-felt and down-to-earth.  The piece is entitled as such since the author embarked on a journey using an old short bus that used to carry special children.

The piece is written in a non-complex manner in support of the Author’s advocacies of empowerment for people with oddities.

Mooney’s narrative gives an account of how he resulted to writing a memoir about the experiences of the disabled.  The author aims to inspire the children who are the center of humorous ridicule while attempting to vindicate his childhood with the fame that he is supposed to acquire from his literary work.  The memoir also addresses the agonies of a disabled child as he spends his life around people who make fun of them.

Moreover, the memoir can also serve as a guide for parents on how to take care of special children.

Mooney begins the narrative in his own words, as he recalls his meeting with a film producer and how he became mute upon meeting the said producer in a certain dining place in New York.  The prologue also describes how Mooney is interested in making a motion picture adaptation of his experience to be shown as an after school presentation.

Mooney gives a detail of how prepared he is for the meeting, but when the producer arrives, the latter suddenly becomes speechless for no apparent reason.

Mooney’s meeting with the film executive becomes more of a situation of panic as he utters different words that does not concern the forthcoming production.  Instead of talking about ideas with connection to the plans for the film, Mooney ends up realizing his new purpose and announces a plan to make a trip across the United States to conduct an ethnographic research about people who coped with abnormality during their growth.

Mooney puzzles the producer with an announcement which leads the latter to ask “Why the hell would you do that?”.  Its an unrealized account of hitting two birds with one stone, Mooney feels the urge to answer the question, however, the author cannot provide a plausible answer (Mooney).  In a similar sense, Mooney pauses and thinks again as to what would drive him to go back for something that he has already surpassed.  It is at this point where he thought of two children he met which gave him a sense of purpose in the first place.

Nevertheless, Mooney moves on with his journey where he met remarkable people that share a similar childhood and adolescent experience with him.  These experiences will be Mooney’s aid in completing his memoir and placing him in the pedestal of fame.  The experiences in Mooney’s endeavors with his subjects will also open the eyes of the people who emotionally batter them.

In his travels, Mooney associated with people once seen as different, he interacts with them to acquire some information about how these individuals dealt with the brutal, soul crushing experience which is normally known as growth.

Primarily, Mooney is compelled by two children who go by the names Bobby and Clay.  In one of his memoir previous memoir tours, Mooney had a moment with a dyslexic boy Bobby.  Amidst a crowd of qurying people, a small boy calls Jonathan’s attention.  This due to the fact that Bobby also faces the horrors of searching for a hiding spot on a daily basis, a nightmare that Mooney himself experienced.  In addition, Bobby is also in the center of teachers’ laughing matter with the inclusion of verbal abuse.

The climax of Mooney’s dedication to advocate for the disabled and different came when he had an encounter with a young man named Clay.  Mooney’s lecture became more of an opening, an opening which is now his memoir: The Short Bus: A Journey beyond Normal.  Mooney felt a connection with the boy through his past, In spite of the reality Clay is facing, Mooney sees a strong spirit in the kid, a spirit so strong it is unbreakable.  Clay’s mentality is what totally drove Mooney to pursue his advocacies.

Mooney’s quest for people with disorders introduced him to people with different cases.  This introduction brought him to new dimensions as each person has a different story to tell.  These personal experiences from different people, for Mooney, is the catalyst so that people of their kind can be part of what is called the normal word.

In his trips he meets Kent, a performing artist suffering from attention-deficit hyperactivity disorder, generally, Kent is not sold by the idea of sitting for six hours and doing nothing exciting, his disorder may result to a short or no attention spand, otherwise hyperactivity.

Kent gives Mooney his side of the story during his childhood days by mentioning that you can’t expect a kid to sit in school for six hours (Scott, 2008).  Kent’s case is quite confusing based on Mooney’s writing, since it may give implications that Kent just has constant attacks of laziness.  Nevertheless, Mooney advocates for people like Kent since he himself have had the same syndrome and it is practical to say that Mooney learned the very broad principles of freedom from Kent, based on his ordeals (Scott, 2008).

Katie, a woman in her twenties suffering from the down’s syndrome is another individual whom Mooney met along the way.  Katie’s dilemma is on the account that seeking employment is not an option for her since society is apathetic to her condition.  Enrollment in educational institutions is not a viable choice for her either because of the mere fact that her condition will  only limit her education in the secondary level and college classes will not contribute to her welfare in any means possible.  The only escape for Katie is to accept aid from government agencies will only lead her to low paying jobs (Scott, 2008).

There are other people deemed different by the sicial eye whom Mooney concerned himself with, such as six-foot five Maine artist, Cookie, who happens to be a cross-dresser.  (Safford, 2008). Ashley, meanwhile, is a blind and deaf girl, cynical, as far as sign language teachers are concerned.  There is also Jeff who is excessive eccentric and always deemed as autistic who describes his world in platonic and simplistic ways (Mooney, 2007).

In many ways, Mooney learned a lot from the individuals he has been with, the different horrors of being typecasted as different may implied different ideas to the author in such a way that the aftermath of his ordeals reshapes his perspectives on what other people call normal.

A good example of what Mooney learned can be seen in The Short Bus, the author challenges people to honor disability without insulting the person (Scott, 2008).  Through his Journeys, Mooney learns the truth that the stereotyping is still practiced in the modern academic life.  That his childhood brutalities are still being felt by the younger generations (Mooney, 2007).

Mooney, prior to his memoir has always dremt of a famed life, a life totally different from his childhood.  He always believed that this kind of life will heal the almost eternal wounds that his gradeschool years left behind.  The experience, conversely changed the perspectives of the author given the horrors that disabilities and disorders bring in the adult stage.  The reality of the situation changed Mooney in such a way that he just provokes society on the context and definition of normal and what are the characteristics that measure the normality of an individual.

Mooney also became acquainted to the fact that transendence to such abnormality should not be considered as a flaw in the sense that people derive creativity and aesthetic talent to their disability.  Mooney also learned that there is life and hope beyond the the labels given to the disabled.

The ultimate lesson learned by Jonathan Mooney while completing his book is the people’s norm regarding disability, and the fact that disability is a mere social construct (Marquette, 2007).  Moreover, Mooney’s experience does not concern the flaws and abnormalities of individuals, rather he has learned to see a positive connotation of human variance, differences and diversities of the so called abnormal people (Mooney, 2007).

In a personal note, I believe that Jonathan Mooney is in a mix of emotions upon his trip across America.  The most probable rason for this is that he is going to associate with people who grew up in the persecuting end of words.  In this regard these people may be aloof or cynical in dealing with other people, particularly with strangers.  The feeling of being isolated will bring a total impact of change once a particular becomes concerned with another individual’s disabilities.

Secondly, I think that Mooney is considering his strategy on how he should approach his subjects given that their social life is inactive.  The manner of how these individuals coped with their academic life must be challenging for Mooney in his strategy of approach because of the mere fact that these people do not receive much attention from others.  The primary reaction of the subjects may have some hostility because of the aforementioned treatment to their kind.

Lastly, Mooney must be feeling nostalgic upon the beginning of his trip granted that, in some way, there are similarities between his experience and the experiences of the people he associated with.  The terror he experienced has some tendencies of coming back while thinking about his project.  There are possibilities of flashbacks of the accounts of his gradeschool life upon the start of his involvement with his subjects.  Moreover, these accounts may also give excitement to Mooney as there may be experiences that the author himself has never before encountered.

Norm is defined as a law that is socially enforced, hence the term normal.  This product of culture is applied to several aspects of life including an individual’s social status.  Judging from the definition of norm and the term normal, plus, after reading Jonathan Mooney’s The Short Bus: A Journey beyond Normal, I conform to the belief that judgment in the context of being normal is a subjective matter.  Subjective in a sense that it is dependent of a person’s point of view.

Mooney’s memoir suggests that normality is nothing more than a social construction which blinds people of their true sight (Mooney, 2007).  In accordance to Mooney’s definition, I believe that there is no universal way in which a person can be deemed normal.  Additionally, that the judgment of what people think to be different is a social flaw which is plaguing humanity for centuries now.

On the other hand, being different is as subjective as being normal. grounded from Mooney’s statement that such differences may be creative and intellectual outlets of a person to succeed in life (Mooney, 2007).  Differences are unique among human beings, and each person can bring something unique to life (Mooney, 2007).  That differences, variances and diversities can be a positive characteristic, and it does not necessarily mean that a person different from most people will never get a grip of success in his entire life (Mooney, 2007).  It is true that there may be evident qualities that would make it reasonable to conclude that a person is different but it is also reasonable that humans are imperfect beings, therefore each person has a flaw.

The Short Bus: A Journey beyond Normal. (2017, Mar 22). Retrieved from http://studymoose.com/the-short-bus-a-journey-beyond-normal-essay 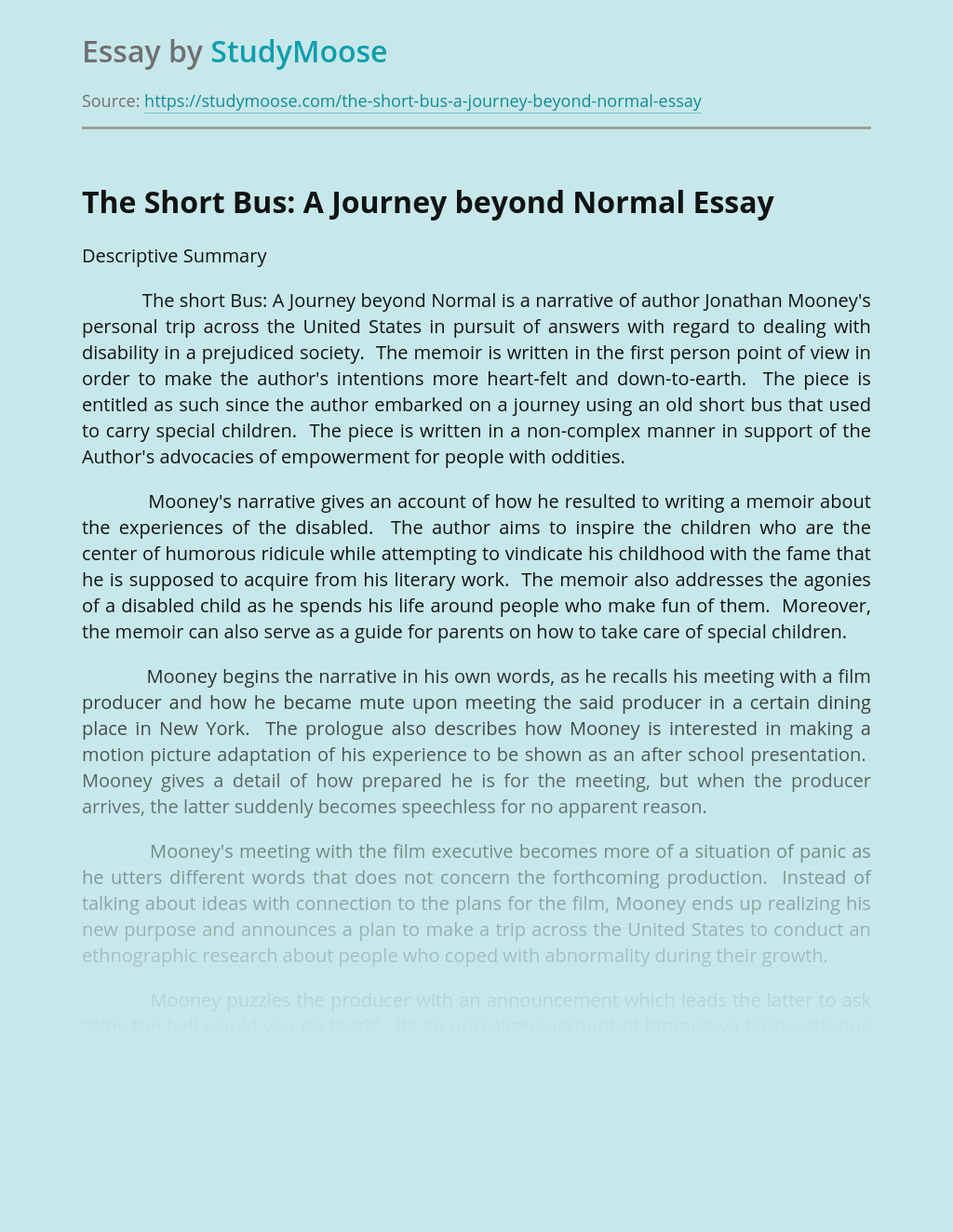 Don’t waste time
Get a verified writer to help you with The Short Bus: A Journey beyond Normal
Hire verified writer
$35.80 for a 2-page paper
Stay Safe, Stay Original