The hours neared towards my very special day. I was nestled deep in comfort and warmth as I awaited the ear drumming beeps of my alarm clock. I turned to look at the digital clock and its luminous numbers covered by a thin layer of glass; it was 11:00p.m. It had only been a few hours since the drowsiness had overwhelmed me, like being pulled into a deep well. Soon the heaviness of my head brought me back down to rest upon the soft, silky smooth pillow.

I awoke to my alarm clock and swiftly moved my hand towards the rectangular box and halted so that my hand hovered over the protruding button and brought my hand down hard upon the cold plastic and the beeping ceased. I rose from my mattress and drew back the coarsely textured curtains to reveal the searing sun beaming at me, like a blinding light,lightening up the world to bring forth a wonderful and happy day with children playing joyfully on the rusted swings in the park.

It was almost picturesque. There was not even a cloud in the sky, although I did feel obliged to go over to those happy children and warn them of the safety issues.

It was my thirteenth birthday today. I was becoming a teenager, the adolescent that I had been dreaming of becoming, there was going to be a whole new set of rules. Yet the day would unfold not as I had either intended or expected. I went to the door and gripped the rounded door knob firmly twisting it with ease, slowly tensing my muscles and pulling it open and then releasing the door with a flick of the wrist so that it moved back to a standstill position completely shut. I knew my mother would be awaiting my arrival in the kitchen any moment as my alarm is loud and you can nearly hear it from everywhere in the house.

She would have been up for a few hours labouring away in the sauna like kitchen preparing a feast almost fit for a king. I pondered at the hours ahead. Although at around twelve oclock I was departing to my fathers taking the form of public transport known as a bus. But before I was going I was expected at my relatives house. I was going to be like a debt collector acquiring presents from each person. I strolled into the dining room lightly and casually where a banquet awaited. I ate hurriedly as I was keen to open my gifts; I was content as a child on Christmas day (not one with coal in their stockings).

After breakfast I went to the dusty old black Cadillac my mother had excitingly bought at an auction for a stunningly cheap $1,500 even though some upholstery needed work it had all original bodywork. I gracefully sat upon the hard leather seats of the convertible. The car moved steadily towards my destination. When we got up the steep and long driveway we ascended the steps to the large wooden double doors. I rang the doorbell as it rebounded from wall to wall until reaching the ears of Aunt Margaret. Aunt Margaret answered the door with a cheerful grin on her widened face. For the next hour we had lunch and I received many a gifts.

We left the orchard, past the hills and countryside when the car halted suddenly. My mother was simply dropping me off at the bus stop. It was a 3 hour drive to my fathers and the bus was the easiest and cheapest way to travel. It was a long trip and I struggle to keep myself entertained for long periods of time like this. (A.D.D. supposedly. It is genetic. I must get it from my mother.) It was lucky I had brought my brand new laptop with me that I had received for my birthday with games that would hold me transfixed to the screen for the entire trip.

I got off the bus and walked carelessly down the dark alley way that I always take as it was a good shortcut. I accidently bumped into a rubbish bin and could already feel and bump forming on me knee. I could smell the horrible dead fish, the same smell at the fish market although somehow different. I resumed my walking and heard a distant almost faint scratching behind the bins. I turned to look but it was already upon me, the big black beast staring me in the face. My heart was thudding, about to break free, it had me pinned upon the cement paving. Its breath, right in my face and I slowly slipped into unconsciousness.

I awoke several hours later not that I had a watch but the darkness outside had significantly increased since the last time I was conscious. I got to my feet slowly growing in strength as I walked along the cement. But then a sharp needle like pain stabbed into the side of my neck. All my energy had been lost and I dropped to my knees, seemingly with my last breath. I yelled for help and aid was not far away. My rescuers phoned a nearby hospital and an ambulance arrived. But what they did not know is that I was already lost. Soon the poison would overcome my entire body turning me into a creature of the night and my hunger for blood would not be satisfied until each and every human was dead. I now possessed little control over my feelings and felt there were no consequences for my actions. I would strike any man down in a single swipe even my own father! 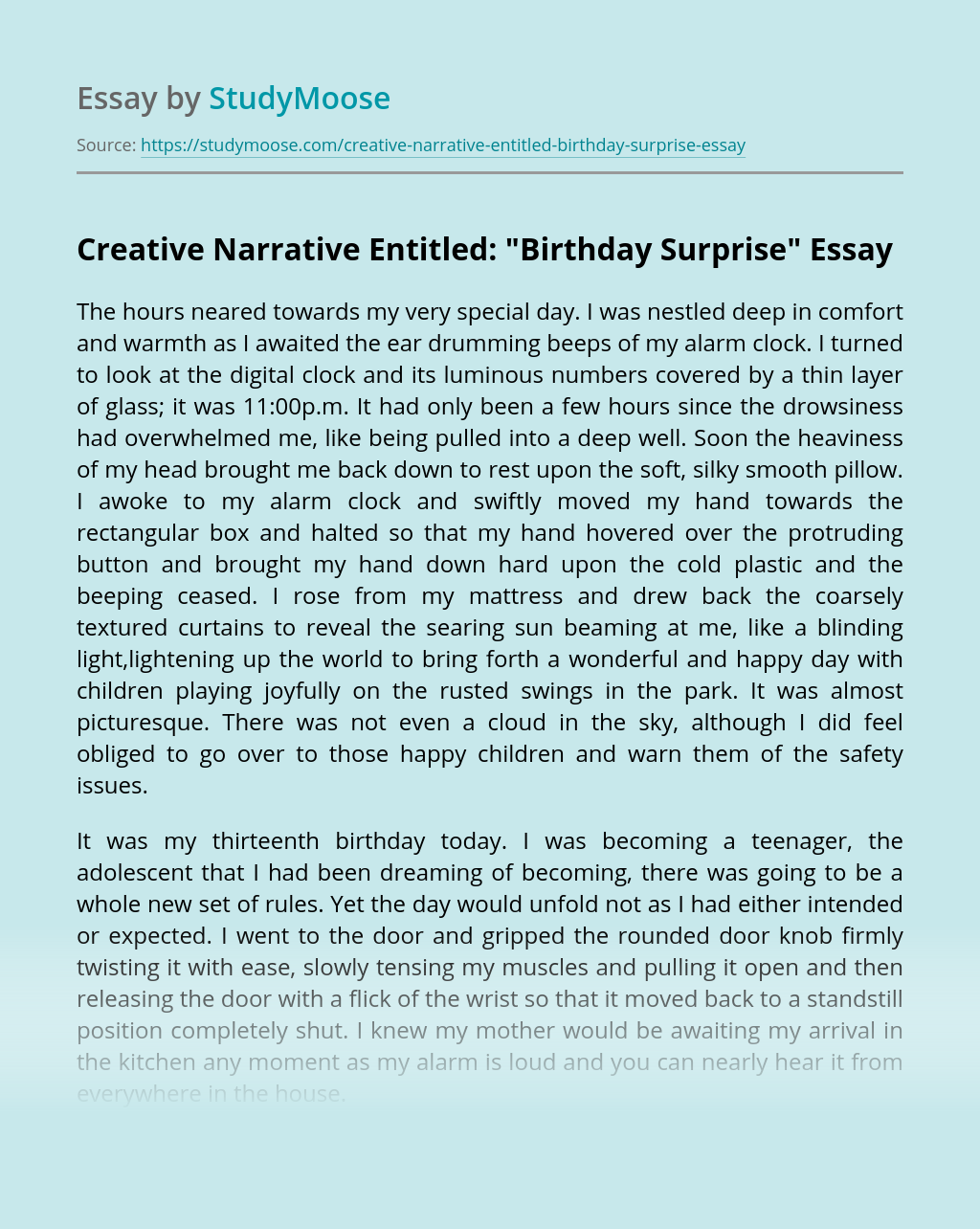 "The Shack" by William P. Young

4.7 / 5 ( 3 votes ) The Shack, written by William P. Young, is a fictional Christian story written in an autobiographical narrative. The title of the book is a metaphor for “the house you build out of your own pain”, as the author explained in an interview with radio talk show host, Drew...

“The Taste of Melon” By Borden Deal

4.7 / 5 ( 3 votes ) The narrator, in the story “The Taste of Melon” becomes a more mature person after the melon-stealing incident. Before he steals the prize melon, he is an impulsive person. He is a teenager not mature enough to understand the consequences of his actions and makes the decision to...

Get Essay
Narrative Writing of The Red Room by Wells

4.7 / 5 ( 3 votes ) A plot twist is a change in the expected direction or outcome of the plot of a film, television series, video game, novel, comic or other fictional work. It is a common practice in narration used to keep the interest of an audience, usually surprising them with a...

How to Write Descriptions

4.7 / 5 ( 3 votes ) Writers in the workplace frequently have to describe things–objects, mechanisms, and spaces. Descriptions of things have several purposes: to enable readers to understand how something works, how it is made or what materials it contains, or to understand how to put something together, take it apart, repair it,...

Advices on Principles Of Good Writing

4.7 / 5 ( 3 votes ) Six elements of fiction: plot, character, setting, point of view, voice and style, and theme. “The theme of a story abstracts its meaning from the concrete details of its plot, point of view, characterization, setting, and style” “Theme is a generalization about the meaning of a story. It...

4.7 / 5 ( 3 votes ) Profit and Loss This narrative briefly describes the short, sorrowful life of Nirupama. The name signifies ‘peerless one’ and was given to her by her parents, who were gratified with a daughter after having had five sons. Being treasured, her father searched long and hard to find a...

4.7 / 5 ( 3 votes ) The strange case of Dr Jekyll and Mr Hyde is a novel that was written in 1886 by Robert Louis Stevenson. It can be understood in many different ways as it is not confined to just one genre of writing and style. Not only does the novel explore...