The Great Gatsby (1925), written by F. Scott Fitzgerald, is a modernist novel depicting the events of a group of socialites from different social classes, during the summer of 1922 on Long Island in New York. It is a story of romance, scandal and betrayal, in a time of great social unrest. The text utilises characterisation to make a statement on the changing society of the 1920s in America, an era known as the Jazz Age, or the Roaring Twenties, as during this short period America transformed form a conservative country to a liberal one.

Don't use plagiarized sources. Get your custom essay on
“ The Great Gatsby (1925) ”
Get custom paper
NEW! smart matching with writer

F. Scott Fitzgerald (1896-1940), was greatly inspired by his wife and muse Zelda Fitzgerald to write many of his novels, including The Great Gatsby. Unfortunately, Zelda suffered from many mental health issues, particularly bi-polar disease, which could have also contributed to Fitzgerald’s alcoholism, and subsequently his writing style. Fitzgerald’s attitude towards women as demonstrated though the text is a combination of an equally romantic “worship” of women, but also an extreme distrust.

This could be perhaps due to his traumatic experience with his wife and her mental health issues. The role of women during the 1920s also changed significantly with the successful passage of the 19th Amendment, in which women were given the right to vote, and granted greater suffrage. This liberation of women is again rarely reflected in the values, attitudes and beliefs of the female characters of the novel.

Despite the success of women in obtaining political liberation during the period of which The Great Gatsby was published, and set, Fitzgerald displays a continuous belief in male dominance through his characterisation of female characters in the text.

He depicts his female characters as they were stereotypes in previous years; inferior to men. Through the use of literary devices, the female characters of the novel are presented in a particular way by the author, through their values, beliefs and attitudes. Throughout the novel men are described based on their wealth or careers, but women are described based primarily on their appearance and desire for material possessions. Fitzgerald implies that women are insubordinate to men through their immorality, dependence on men, and choice of money over love in their materialistic ways. The three main female characters in The Great Gatsby include Daisy Buchanan, Myrtle Wilson, and Jordan Baker. All three main women display poor examples of women, while Tom is the only hated male character of the three main male characters. They are narrative agents who have been carefully constructed to embody Fitzgerald’s values attitudes beliefs and ideologies in regards to women in the 1920s American society.

Daisy Buchanan is the pampered upper-class wife of Tom Buchanan, cousin to the narrator Nick Harroway. She comes from “old money” and lives with her husband and her daughter in the luxurious community of East Egg. Daisy is also the object of Jay Gatsby’s desires and to him the epitome of beauty and desirability. Daisy is the stereotypical married wealthy woman of the 1920s, consuming herself with shallow relationships. Despite the glamour and privilege of her life, she is never satisfied, frustrated by her husband’s conspicuous infidelity. Daisy, like all the women of the novel, is constantly referred to and treated as an object, hence she can be seen as a ‘centre piece’, pretty to look at with no actual substance. Daisy has no real own identity, and is often defined by the men in her life, Tom and Gatsby, she has a tendency to hide behind them. Fitzgerald has made her a somewhat unlikable character through her inability to pursue her romantic relationship with Gatsby, and their torrid love affair. She is depicted with no ‘back bone’, and is constantly allowing herself to be controlled and influenced by other men, regularly ‘playing the victim’. Daisy’s value and concern for money is demonstrated frequently throughout the text, particularly in her indecisiveness in her relationships with Tom and Gatsby. She initially is in love with Gatsby, however, she decides to marry Tom who provides her with greater financial security. She does not again pay attention to Gatsby until he has secured more wealth, and then she chooses to love him again. This reflects Fitzgerald’s belief in women and their supposed fickle and shallow values, preoccupation with appearance and materialist ways. This is again enforced in her comment about her daughter, who should grow up to be a ‘beautiful little fool’, with an emphasis on appearance over education. Loyal only to the gesture and sentiment of love, as well as financial security in a relationship, she deserts Gatsby when he takes responsibility for Myrtle’s death. She does not even pay him the respect of coming to his funeral and honouring his life when “(Nick) tried to think about Gatsby then for a moment, but he was already too far away, and (he) could only remember… that Daisy hadn’t sent a message or a flower”. This is yet another negative depiction of women by Fitzgerald as Daisy’s self-centredness is reflected in her inability to give thanks or honour to Gatsby for saving her life. Daisy’s selfish ways and extreme value of money as the main female character, demonstrates Fitzgerald’s belief that women only place value on material things and care primarily for themselves.

Jordan Baker is supposed to be the representation of the ‘modern woman’, and how women behaved in society post-suffrage, as liberated women. However, while on the surface this can be seen as true, through her self-sufficient ways and apparent independence, through closer examination it can be revealed that she has failed as a true feminist female character, due to Fitzgerald’s anti-feminist beliefs. Jordan had the potential to be the epitome of the emancipated young American woman, due to her successful career and apparent independence, as she lives mostly alone aside from her Aunt, yet Fitzgerald transforms her character into an impulsive, selfish and manipulative female. On the surface, Jordan gives the appearance of being financially independent, nonetheless she is still tied to her family’s old money, and is subsequently insulated by it. Jordan Baker has been presented to the reader to not value honesty or the needs or wants of others, and rather to focus selfishly on her own gain. Fitzgerald has presented Jordan’s feminist beliefs in wanting to be self-sufficient and independent in a negative light. This negativity towards her values and actions is demonstrated through Tom’s comment that her family “shouldn’t let her run around the country in this way”. Tom’s opinion could be considered reflective of that of Fitzgerald and his opinion on American women of his era, behaving in a similar manner. When driving with Nick he calls Jordan “a rotten driver” and careless. She insists that “others will keep out of her way… it takes two to make an accident”. This careless comment depicts Jordan’s attitude as being too sucked into her own life to carefully consider the lives of those around her. It also represents women as irrational and not careful thinkers, as well as once again self-centred. At Jordan and Nick’s last meeting at the end of the novel, she announces that she is to be married, and Nick doesn’t believe her. It is left to the reader to decide whether this is true, however, Fitzgerald has carefully constructed Jordan to look like a villain from both perspectives. If she does wed another man, she is presented as impulsive, irrational and fickle, as it could be concluded that she is doing so purely to spite Nick. She would also be again conforming to societal roles in getting married, especially to someone she barely knows and clearly doesn’t love. If Jordan is in fact lying, she is perceived as pathetic and attention-seeking, wanting Nick to chase after her. Fitzgerald has carefully constructed Jordan Baker, a character with the potential to represent the liberated American woman of the 1920s, to be just as self-centred, manipulative and irrational as the other women of the novel, emphasising Fitzgerald’s belief in a male-dominated society.

The final main female character of The Great Gatsby is Myrtle Wilson. She is the wife of George Wilson, and mistress of Daisy’s husband Tom Buchanan. Myrtle is a clear representation of how women acted before their rights were gained, pre-suffrage, as she does not care how she is treated as long as she is desired by a man. Her reliance on men as a character presents her as the stereotypical woman of the 1920s. This is evident in the way that she remains with Tom even after he breaks her nose with a “short deft movement… with his open hand”. Myrtle has been constructed as a character to be the epitome of the word ‘materialist’, through her excessive value on physical possessions, wealth, and social status. She is introduced in the novel through an interruptive phone call, and it is here that her social class is identified. Jordan’s comment that Myrtle doesn’t have the “decency not to disturb at dinner” highlights her lower class, as she hasn’t got an understanding of social morals. Myrtle’s name can be seen as symbolic, as myrtle is a beautiful climbing plant. She is a ‘climbing plant’ in the sense that she is trying to climb the social ladder to achieve a place in the upper class, which is of great value to her. Myrtle’s immorality is revealed from the beginning of the novel where she states that she felt she had made a mistake in the choosing of her husband, when she discovered he “borrowed somebody’s best suit to get married in”, and in response she would “lay down and cried to beat the band all afternoon”. She is portrayed here as an emotional woman, with little substance, again emphasising Fitzgerald’s belief in women’s value of wealth and material things. The death of Myrtle also exemplifies that women cannot survive on their own, as mere moments after she escapes her husband’s capture, she is killed by a car driven by Daisy. Through this action, Fitzgerald implies that it would have been smarter to follow her husband and hence avoid an untimely death. The characterisation of Myrtle though her values and attitudes reveal Fitzgerald’s belief in a patriarchal society.

Literary devices while do assist in the construction of characters, should also be used in combination with an appeal to their values, attitudes and beliefs. F. Scott Fitzgerald had characterised his female characters to reflect his own attitudes and beliefs towards the women of his time period, in the 1920s in America. His emphasis on their negative attributes as women, demonstrate his belief in a male-dominated society. 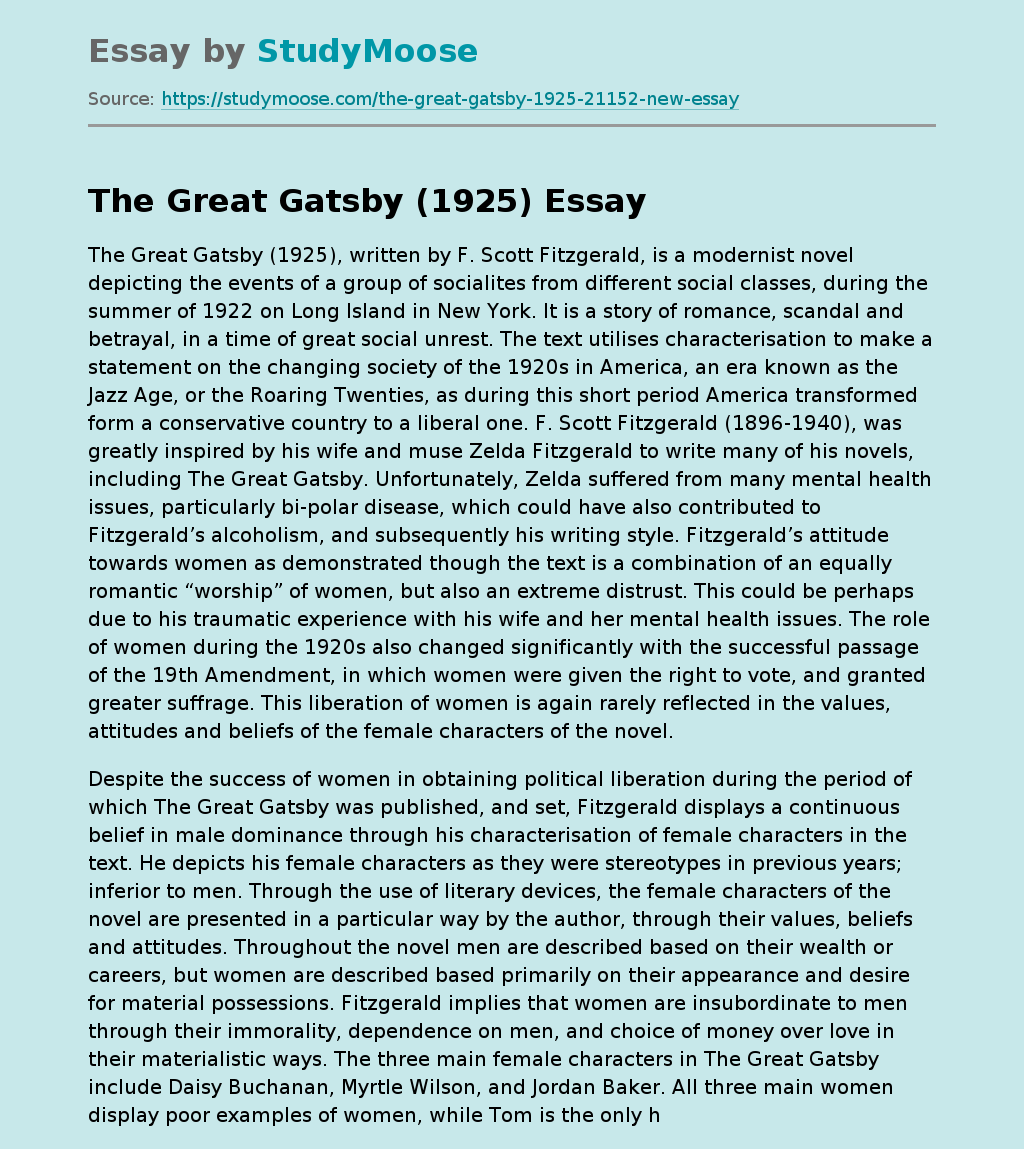