Color Symbolism in Movie and Book the Great Gatsby

There are so many themes in The Great Gatsby, a fictional story, written by Francis Scott Fitzgerald. The storyline is set in the 1920s, where “Gin was the national drink and sex was the national obsession”, according to The New York Times. It is a story of passion, hardships, the American dream, prosperity, and hope. One theme in the book is the application of colors and what they symbolize.

Yellow is a color frequently associated with wealth and riches. This would be true in The Great Gatsby.

Don't use plagiarized sources. Get your custom essay on
“ Color Symbolism in Movie and Book the Great Gatsby ”
Get custom paper
NEW! smart matching with writer

Jay Gatsby had all this wealth, in which most of his material items were colored yellow. In fact, everything from his tie to his car was yellow. Even his glamorous parties that attracted hundreds of uninvited guests were themed yellow. In the 2013 movie, The Great Gatsby, starring Leonardo DiCaprio and Carey Mulligan, Daisy’s hair was a bright gold color. During the parties, girls in yellow dresses were mentioned several times. In fact, many characters were seen with yellow attire.

Jay Gatsby loved yellow so much that he even had yellow food, such as lemons and cocktails. This color is often used as a way to catch and bring people’s attention to it. This was exactly what Jay Gatsby was trying to do in the story, to catch Daisy’s eyes so she could come wandering into one of his parties.

Yellow is also a symbol of death and decay. Daisy and Jordan were seen wearing white at the beginning of the story, which means pure and clean.

Near the end of the story, Daisy was driving Gatsby’s car when she hit Myrtle, George Wilson’s wife, who was attempting to flag down the approaching car. Ironically, the car was nicknamed the “death car” by the newspapers. Then right above the incident, Dr. T.J. Eckleburg’s eyes, or the eyes of God, are constantly watching. In fact, the rims of the glasses on Eckleburg’s eyes are golden yellow. The last time yellow is used to symbolize something is when Gatsby walks to the pool with his pool raft. He walks through a line of yellowing trees. This is foreshadowing his death. Walking through the yellowing trees means he walked right into death.

The color yellow varies depending on the character. For Jay Gatsby, it is wealth and riches. For Nick, wealth doesn’t matter to him, it is just his love for Jordan Baker that is like gold. A daisy is a flower with white petals and yellow on the inside. Daisy seems pure and perfect to Jay Gatsby, but in reality, she was careless and rude.

Yellow/gold represents the American dream or the desire to achieve greatness and rise through the social status. Gold is easy to keep, but it is hard to hold on to. Jay Gatsby had his entire life set in front of him, but within a blink of an eye, all of his world vanished into thin air.

In conclusion, yellow plays a dominant role in The Great Gatsby. It represents wealth, death and decay, and the American dream. Fitzgerald knew exactly what he was depicting when he chose the symbolic color yellow.

Color Symbolism in Movie and Book the Great Gatsby. (2021, Apr 26). Retrieved from http://studymoose.com/color-symbolism-in-movie-and-book-the-great-gatsby-essay 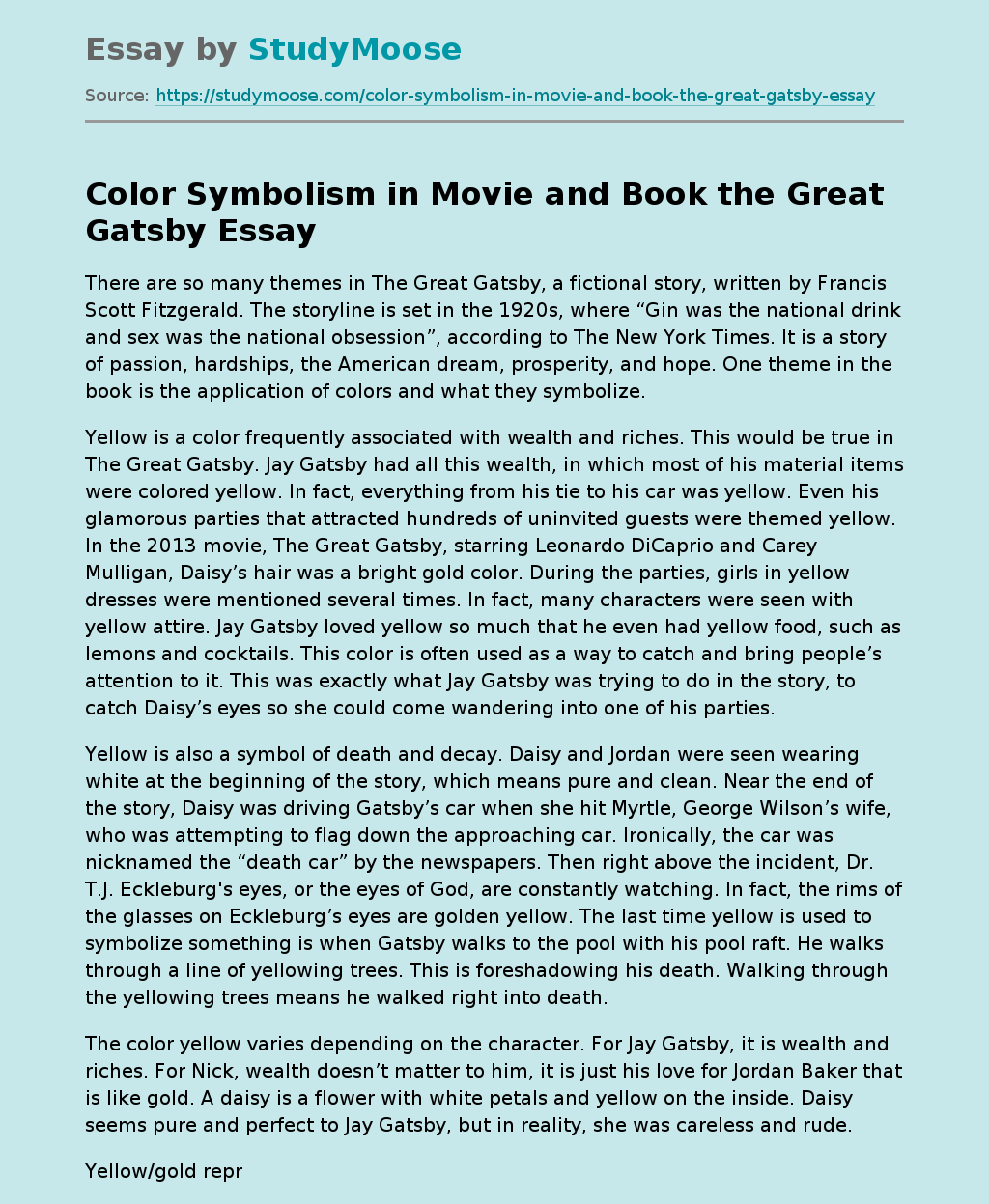