Symbolism and Motifs in the Great Gatsby

In chapter one, we are introduced to Nick Carraway, who describes himself as non- judgemental and tolerant. Throughout the book Nick is the non-reliable narrator . He is an observant third party throughout the book and gives the readers a close-up and exclusive angle on the story. This can often come across as a very bias point of view from Nick. In chapter one, ‘’the green light’’ is introduced, this is probably one of the most important symbols in The Great Gatsby.

Don't use plagiarized sources. Get your custom essay on
“ Symbolism and Motifs in the Great Gatsby ”
Get custom paper
NEW! smart matching with writer

Green is the colour of hope and it first appears when Gatsby stares across the bay towards a green light at the end of a dock.

In chapter two, one of the key symbols used in the book is ‘’this is a valley of ashes- a fantastic farm where ashes grow like wheat into ridges and hills and grotesque gardens where ashes take like forms of houses and chimneys and rising smoke and, finally, with a transcendent effort, of ash-grey men, who move dimly and already crumbling through the powdery air’’ (pg 26).

I think the ‘’valley of ashes’’ represents something that is dark and lifeless, with the fire ashes representing death and destruction, possibly foreshadowing bad things that are to happen.

I also think that the phrase ‘’transcendent effort’’ has a meaning of own fault, and that it didn’t take much effort for them to get in the situation instigated to happen in this second chapter, and that all the factors of the lifestyle they are living such as the glamour and the money and the parties is the result of a careless and vulnerable way of the living in the 1920s.

Colour is also used here to emphasise destruction and darkness with the gray surrounding around them indicating the hopelessness of their situation.

But above the grey land and the spasms of bleak dust which drift endlessly over it, you perceive, after a moment, the eyes of Doctor T. J. Eckleburg. The eyes of Doctor T. J. Eckleburg are blue and gigantic- their retinas are one yard high. They look out of no face but, instead, from a pair of enormous yellow spectacles which pass over a nonexistent nose…But his eyes, dimmed a little by many paintless days under sun and rain, brood on over the solemn dumping ground. ’’(pg26) I think this passage is intended by Fitzgerald to come across as the eyes of God looking over the world.

This could also link to Nick who is throughout the book the observant third party of the entire goings on. He is the only person in the book who knows what is fully going on in the book, yet i don’t think he understands the motives and reasons that have driven each of characters decisions. ‘The eyes of Doctor T. J. Eckleburg are blue and gigantic’ This also represents the idea of god watching over them. The blue colour is also used to show Corruption of spirit in the wasteland is also symbolized by the colour blue, which represents the destruction of reality.

I Think the ‘Valley of ashes’ and ‘eyes of Doctor T. J Eckleburg are linked strongly both be influenced by the idea of god watching what is going on. Another meaning for blue is fantasy. Gatbys blue gardens and his house let people escpae from reality. Gatsbys parties were always filled with dreams and illusions. Colours are used greatly throughout to symbolise all sorts of different things. White is used a lot suggesting purity, innocence and honesty. Nick considers himself to be one of the only truthful and honest people he knows and when he attends one of Gatsby’s parties for the first time, dresses in a white flannel suit.

Fitzgerald suggests through the point of view of Nick that other characters wear white yet inside they are rotten and immoral. In Chapter three, Nick Carraway is at one of Gatsby’s parties and finds the drunken Owl Eyes in Gatsby’s huge libraries full of books. This shows that Owl eyes finds substance within Gatsby, simply because he has real books and in 1920s many people had book covers in which they kept different things. I think this means that there is more to Gatsby than it first seems and this also appeals to Nick who then i think becomes curious and slightly suspicious of Gatsby’s character.

The eyes also seems to repeat the motif of the eyes of Dr. T. J. Eckleburg.. At this particular party, “the bar is in full swing, and floating rounds of cocktails permeate the garden. ” Champagne is “served in glasses bigger than finger bowls. ” I think that this links to excessiveness which is a very repetitive motif in the first 3 chapters, with characters, such as daisy for example, acting way over the top and putting on a show . Still, although the bar is crowded, “Gatsby was not there. ” The fact that he does not drink sets him apart from guests like Owl Eyes who boasts of having been drunk “for about a week now. Prohibition, the law of the land, is ignored.

This represents and symbolises the carelessness of the generation who attend Gatsby’s parties. Overall, the first three chapters I invite the reader for think about what is going to happen, there are many clues and hints given throughout by foreshadowing. I think Fitzgerald is clever to use Nick as an observant third party as well as an un-reliable narrator as I think it allows the reader to create their own points of view on what is going and what the characters currently introduced are like as well as take nicks bias accounts of events into perspective as well.

The symbolism used in the first three chapters adds depth to the story making it not only about a story but creating a purpose to all the little details Fitzgerald has added to make characters, such as Gatsby for example, more mysterious as well as the story line. Colours play a huge part in the first three chapters and are very relevant to the storyline and colours change throughout the book like the characters change also.

Symbolism and Motifs in the Great Gatsby. (2017, Feb 15). Retrieved from https://studymoose.com/symbolism-and-motifs-in-the-great-gatsby-essay 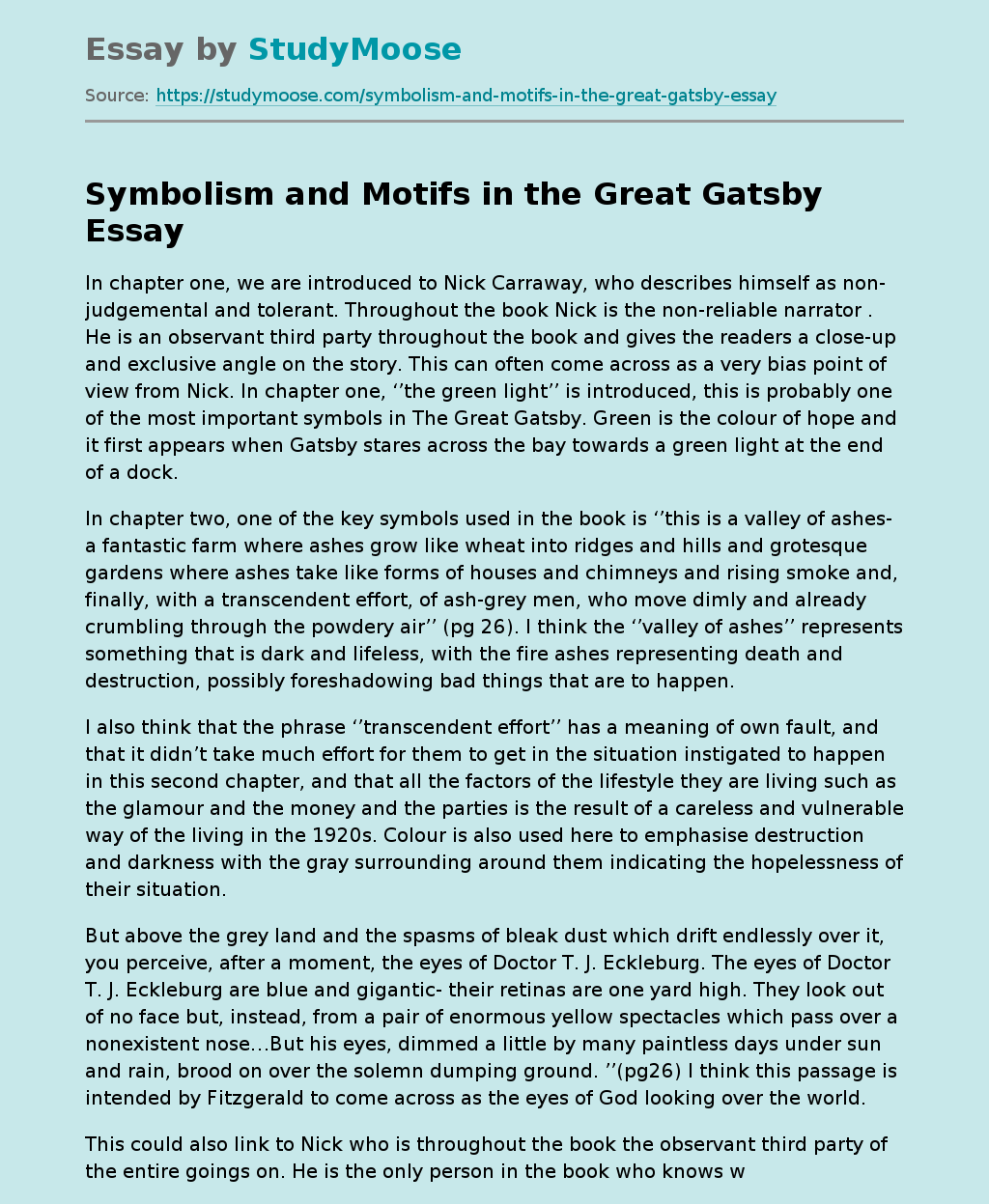