Character Color Analysis”The Great Gatsby”, written by F. Scott Fitzgerald, is discusses social classes, and focuses on the theme of a fading social order. This theme is shown in the relationships between the characters and undoubtedly in the characters themselves. Throughout the novel, Fitzgerald not only uses color symbolism to set the scenes and events, but he also uses it to present, describe, and shape every single character. Gatsby is one of these characters; his choices, decisions, ideas, and beliefs are represented by symbolism and colors yellow, green, and white.

Don't use plagiarized sources.
Get Your Custom Essay on “The Great Gatsby” Color Analysis Just from $13,9/Page

First, yellow stands out as the color that represents new money and wealth acquired. “…I put my arm around Jordan’s golden shoulder.”(Pg. 77). Fitzgerald uses gold, a vivid representation of yellow, to symbolize the wealth gained by Gatsby and the immense desire for him to get even more and to show it off to the entire society. In the light of the following events, it is easy to see how Gatsby is blinded by his love for Daisy and therefore money.

He buys a large yellow Rolls Royce to show off his new money. The band at his party plays “yellow cocktail music” to show his fulsome way of living and life. Yellow, as in Egypt and Burma, also symbolizes Gatsby’s mourning about showing and telling his past; the yellow shirt he wears while he is lying to Nick about his past is a vivid example of this symbolism.

Second, Fitzgerald uses the color green to symbolize greed, hope, and jealousy. The new money and wealth gained by Gatsby is nothing compared to the old money that Tom Buchanan has always had. “In the sunlight his time was green.”(Pg. 117). Green represents the envy that Gatsby feels for Tom and for the fact that Daisy is with him just because of his wealth. Gatsby’s hopeless love and envy for daisy is represented by this color. The bright light that this color gives shows the hope Gatsby had for being with daisy. The green light of Daisy’s dock shows how much he hopes and desires a chance to live his future with the love of his life.

Third, Fitzgerald uses the color white to symbolize purity and a mask covering dishonesty. This purity is shown in Gatsby’s hopeless desire to gain Daisy’s love, as she was the white lady of his dreams presented to him for the first time in a shiny white dress. This white dress shows Gatsby’s view over her as pure worn by her shows how much her corruption was being masked or at least tried to be masked. “His Heart beat faster when Daisy’s white face came up to his own.”(Pg. 107). She also uses white powder on her face and at one point she starts talking about her “white girlhood” and how she was so pure and naïve. Gatsby’s dream was getting destroyed piece by piece by this white veil of corruption and materialism. Gatsby’s white dreams were nothing but an entangled chaos brought by Daisy’s materialistic ideas. After all, Gatsby’s true love turns out to be a black witch masked by a white veil of purity.

In final consideration, Fitzgerald builds and shapes a world of colors around the characters of the story, creating not only their different looks and behaviors, but also elaborating their personalities and sentiments. These colors connect the reader to the novel by making him see and feel the actual events and emotions a character has and not only an imaginative image. Gatsby’s example, which is full of lines rich of color imagery, makes the reader feel what he feels; sense what he senses; and try to be what he is. Gatsby’s figure is greatly shaped by this color imagery, validating and supporting the title of the book, colors show how great The Great Gatsby was. 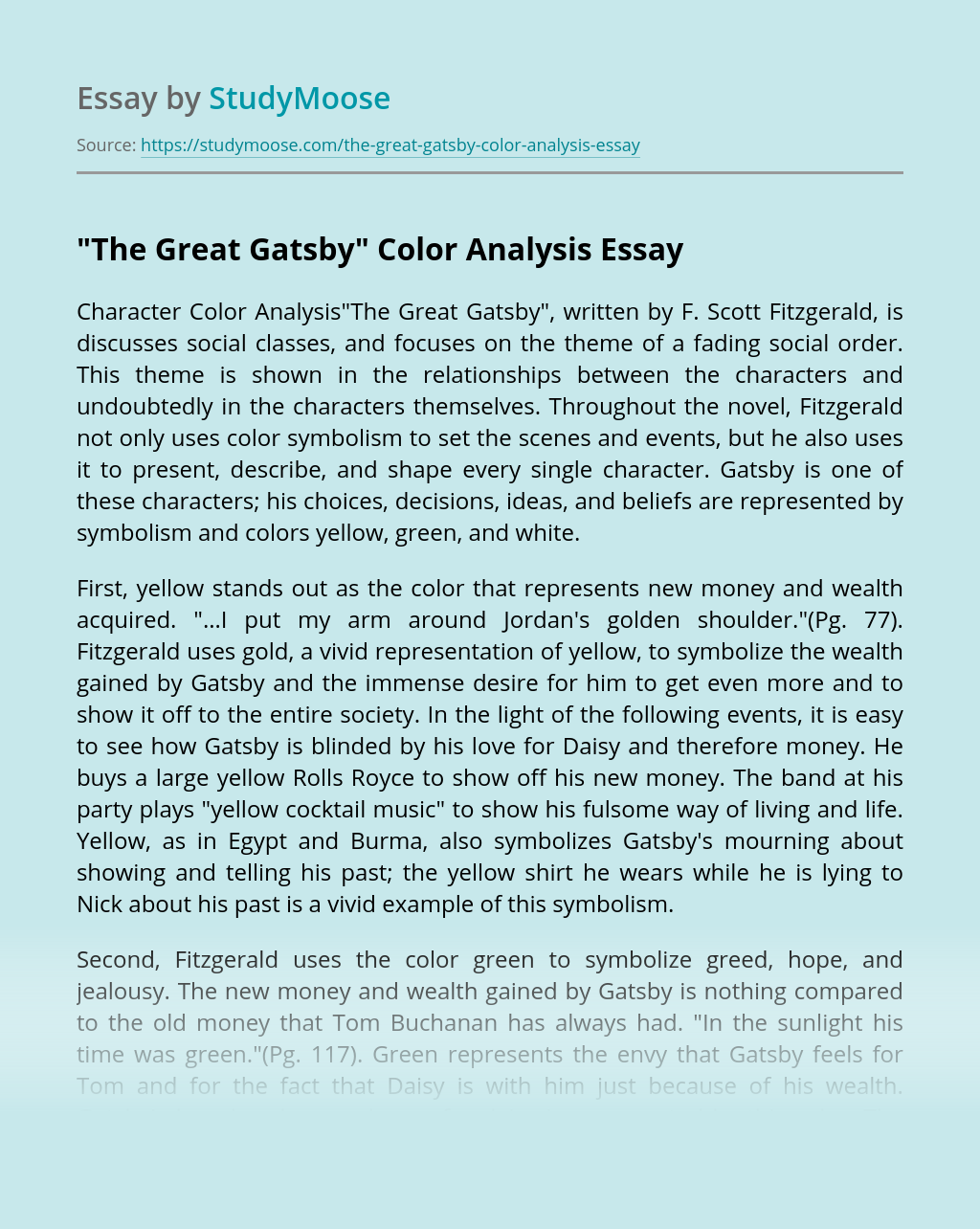 A Aay at The Beach

It was a hot, oppressive day and my friends and I decided that it was a virtuous day to go to the beach. I could see the Sun optimistic yellow pellet, blistering in the sky as we were on our way to the Newport Beach in Rhode Island. The open-air temperature was progressively starting to...

The mountains of unlimited borders went beyond the earth to the heavens as the water and sun developed its tangibility. Personalities of light permitted an intricate portrayal of the perfect environment. Albert Bierstadt, a German-born, American artist, had the ability to communicate such beauties of nature and its landscape through his paintings. In 1863, through...

Get Essay
"Helen" by Hilda Doolittle

The first thought I come up with when reading Doolittle’s Helen is the extreme difference between her poem, and Poe’s poem, Helen. Doolittle and Poe both describe Helen using her face, eyes, legs, hands, and knees; however, Doolittle expresses the speaker’s growing hatred of Helen while Poe adores her deeply. Doolittle makes an interesting choice...

A pigment solution contains compound A with 4 polar groups and compound B with 2 polar groups. You plan to separate these compounds using paper chromatography with a non-polar solvent. Predict the location of the two bands relative to the solvent front. Explain your answer. Since compound A is probably more polar than compound B,...

Analysis Of The Movie 'Pleasantville'

The film ‘Pleasantville’ is about two modern teenagers, David and his sister Jennifer, somehow being transported into the television, ending up in Pleasantville – a 1950s black and white sitcoms. David knows that they have to act like the ‘real’ characters as he definitely knows the world well, but soon he realises that it is...