The Great Gatsby--Comparison Between 1974 Movie and the Book

The Great Gatsby —-comparison between book and 1974 movie The difference between the developing way of books and movies is magnificently huge because the way of emotion transmitting is different; the movie is based on vision, while the book is based on words.

Don't use plagiarized sources. Get your custom essay on
“ The Great Gatsby–Comparison Between 1974 Movie and the Book ”
Get custom paper
NEW! smart matching with writer

This previous phenomenon is because the need of fluent transition in movies. There are some other similar additions in the movie of 1974 in order to keep the continuity of the story. For example, when Myrtle sees Gatsby’s car come across the Valley of Ashes, she rushes downstairs and even stumbles because of excitement and hysteria. This addition is in order to explain why Myrtle runs straight towards the car and how she died, since in the book, limited to the perspective of narrator, the author didn’t described this plot.

However, if the plot was deleted in the movie, the audience wouldn’t know why and how Myrtle died.

In first chapter of the book Tom has to leave for a phone call that comes from his mistress after talking about the butler’s nose, in the movie he leaves when talking about whites being the supreme race. In the book the dinner scene continues with a longer conversation till about ten o’clock and in the movie the dinner ends right after Tom and Daisy come back to the table.

In the book Daisy asks about Nick being engaged to a woman out west while he is about to leave on the boat. In the book they just say goodbyes when he was the boat at the dock. These details seems unimportant but it’s these tiny things put together to complete the scene of life of 1920’s upper classes. According to Fitzgerald, people were idle, spending incredibly long time in dinner, talking about trivia like the butler’s nose, and focusing on unwarranted rumor like Nick being engaged to someone. Most of deletions of scenes are caused by the limit of time in the movie.

However, the version of 1974 Gatsby movie didn’t fully succeed in manipulating the order of plots and transiting the spirituality what the author expressed, though it quoted a great deal of sentences from the book. Part of the reasons may be the omission of some of the important features and characters. In the book, there is a self-made millionaire named Dan Cody who has an intimate relationship with Gatsby. While in the movie, this character has been left out. As a matter of fact, the importance of Dan Cody to Gatsby’s life cannot be exaggerated. He is like Gatsby’s father, teaching Gatsby skills and becoming a paragon of Gatsby’s life. Also, the owl-eyes guy who Nick encounters at one of Gatsby’s party is also omitted, which is absolutely incorrect. Because the owl-eyes is the only one who goes to Gatsby’s funeral except Nick and Gatsby’s father, which symbolized there is still someone in the world who holds good characteristics.

One of the most important difference between movie and book is that when Gatsby and Daisy encounter each other again, it doesn’t rain, while in the book, it’s some sort of emphasize the background of raining in order to show the feeling of Gatsby’s emotion. This may be due to the technology in 1974 make it impossible to shoot successful scenes in rain or the inability to make artificial raindrops. However, some changes seem unreasonable and ridiculous. For example, it said it has been eight years since Gatsby and Daisy’s last meeting while they reunite in Nick’s house in the movie. The changing of that plot doesn’t help at all except making all characters older and more callow than they are supposed to be, and makes Gatsby sounds crazier than he showed in the book. Also, Nick was supposed to meet Gatsby without knowing who he is and talked with him about the war. In the movie, Nick was invited by Gatsby to upstairs and then had an awkward dialogue with him. Those changes considerably draw the movie back.

All in all, most of the differences between the book and the 1974 movie are due to the limitation of time, continuity and fluency of the story, and a small amount of them, are unreasonable. The movie itself is basically okay, but seems to lack some deep thing compared to the book. Because Fitzgerald is a genius in using language, poetic, satirical, incisive at the same time, which is extremely difficult intimate.

The Great Gatsby--Comparison Between 1974 Movie and the Book. (2016, Dec 26). Retrieved from https://studymoose.com/the-great-gatsby-comparison-between-1974-movie-and-the-book-essay 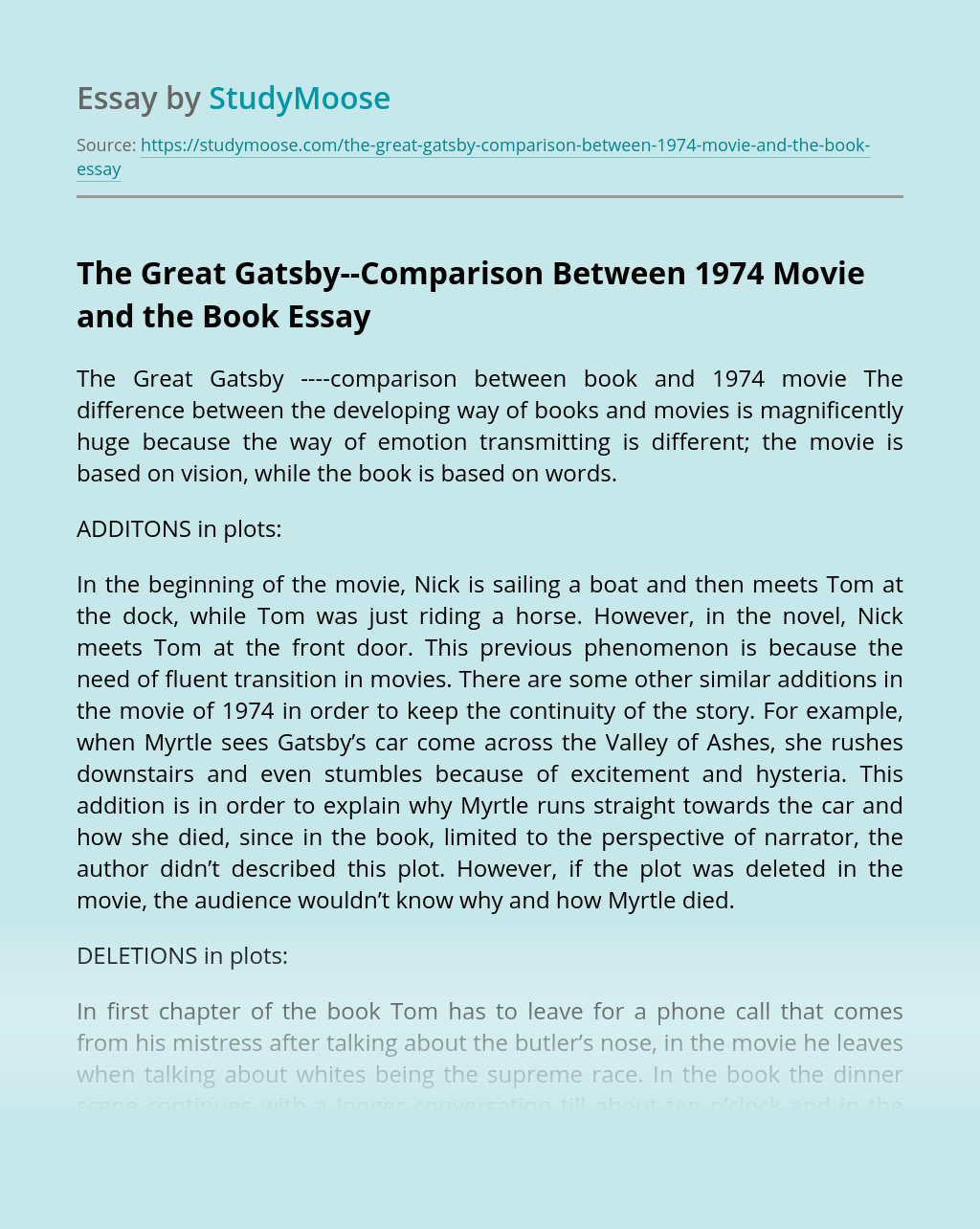