The Great Gatsby: Book and Film

The two texts, ‘The Great Gatsby’, written by F. Scott Fitzgerald in 1926 and its film adaption, ‘The Great Gatsby’, directed by Jack Clayton in 1974 both achieve successful in depicting ‘the decline of the American Dream’ in post war American Society. Confusing a healthier and more fulfilling lifestyle with increased wealth and status is an underlying theme in both texts.

Both texts are seen through the ‘eyes’ of Nick Carraway as he follows and observes an irrepressible dreamer, Jay Gatsby. A man who is trying to grasp an ‘object’ (a ‘wealthy girl’ named Daisy) whom he once had as a love interest.

Don't use plagiarized sources. Get your custom essay on
“ The Great Gatsby: Book and Film ”
Get custom paper
NEW! smart matching with writer

The Scene in the film adaption, where Nick sets up Gatsby and Daisy’s reunion is very important as it could be viewed as the ‘climax of the film’. In the Novel, this scene occurs in Chapter 5. It begins with Gatsby sending a man over to Nick’s cottage to mow the grass and organising the delivery of great amounts of Daisy’s favourite flowers.

In the following quote; ‘The flowers were unnecessary… a greenhouse’, Nick raises the issue of the conspicuous excess of flowers that were filling his Cottage. This scene highlights Gatsby’s obsession to make everything perfect for Daisy’s arrival. This scene in the film adaption however, uses the technique, Mise en Scene in its visual portrayal of the excessive number of flowers in a confined space.

Gatsby frantic rearrangement of Nick’s house to how he likes it; or more so, to how he believes it be appropriate for Daisy’s taste is the climax and is depicted in the novel by, ‘‘of course, of course! They’re fine!’ and he added hollowly, ‘… old sport,’’ (Gatsby dialogue).

The use of repetition of ‘Of course’, the exclamation mark after ‘They’re Fine!’ and the pause ‘…’ cutting the dialogue illustrates Gatsby’s high emotion, or put simply; a state of panic.

The difference between the two texts is that the film adds the detail of Gatsby hiring men to deliver expensive food, silver cutlery, and tea sets to Nick’s cottage. The adding of the ‘silver’ symbolised wealth and emphasized Gatsby’s fashionable status. It was through this delivery scene in the film that Gatsby was able to show Daisy his wealth. Gatsby’ wanted to please Daisy in any way possible. By making her feel as though she was in ‘her paradise’ he was attempting to win her over Tom Buchanan.

The reunion of Gatsby and Daisy in the film adaption occurs when Daisy is admiring the flowers, and then suddenly looks into the mirror only to realise that Gatsby is standing in her presence. This is very important as it symbolises the ‘intimacy’ the two characters once shared years earlier. The subtle use of the music from non – diegetic, where the intimate music is played, to sound diegetic; where the two characters are talking ‘softly’ to each other creates the effect of intimate tension between Gatsby and Daisy.

In contrast, the novel’s treatment of the reunion of the two characters begins with Gatsby knocking at the door and Nick answering. ‘ then from the living room I heard a sort of choking murmur and part of a laugh…’ This quote supports the idea that there is a theme of mystery. In the film adaption, Nick witnesses Daisy and Gatsby making contact. In the novel however, Nick is not in the room, but close-by outside the room where he can only hear Gatsby and Daisy.

Another technique used in the film adaption was the different portrait/reverse shots of Gatsby and Daisy switching from one to the other, continuously intercutting and slowly zooming on each of their faces. The effect of this technique allows the viewer to be able to gain insight to the emotional state of Gatsby and of Daisy. This technique also helps to convey the tension of this moment, as they had not made contact with each other in 8 years. The novel states that it was coming up to 5 years, ‘five years next November’.

In the film adaption, when the two ‘lovers’ gasp at each other, Nick is awkwardly placed in the middle of the two. Nick is dressed in a ‘boring brown’ colour, which makes him blend into the background. Nick has been used to set up the reunion scene. When Gatsby and Daisy reunite they completely ignore Nick’s presence. ‘A pause; it endured horribly. I had nothing to do in the hall, so I went into the room.’ This quote from the novel depicts how Nick felt when he realised his purpose for Gatsby has been fulfilled. He felt useless.

Dim light was used throughout this scene to send the message to the viewer that it was an intimate secret moment between Gatsby and Daisy. The Camera distance is fairly close to the characters and the shifting of the camera helps depict the perspective and thoughts of each character.

In conclusion by analysing this particular scene, both texts; the novel, ‘The Great Gatsby’ (1926) and the film adaption, ‘The Great Gatsby’ (1974) successfully look at the ‘Decline of the American dream’ through wealth and status. The two texts also depict that this scene through the use of dim light and close camera distance depicts the tension and intimacy of ‘Gatsby and Daisy’s Reunion’. Also the technique of the shifting of the camera helps represent the perspective and thoughts of each character. Therefore even with the added details, the film adaption successfully still follows the sequence of events shown in the novel.

The Great Gatsby: Book and Film. (2020, Jun 02). Retrieved from https://studymoose.com/the-great-gatsby-book-and-film-essay 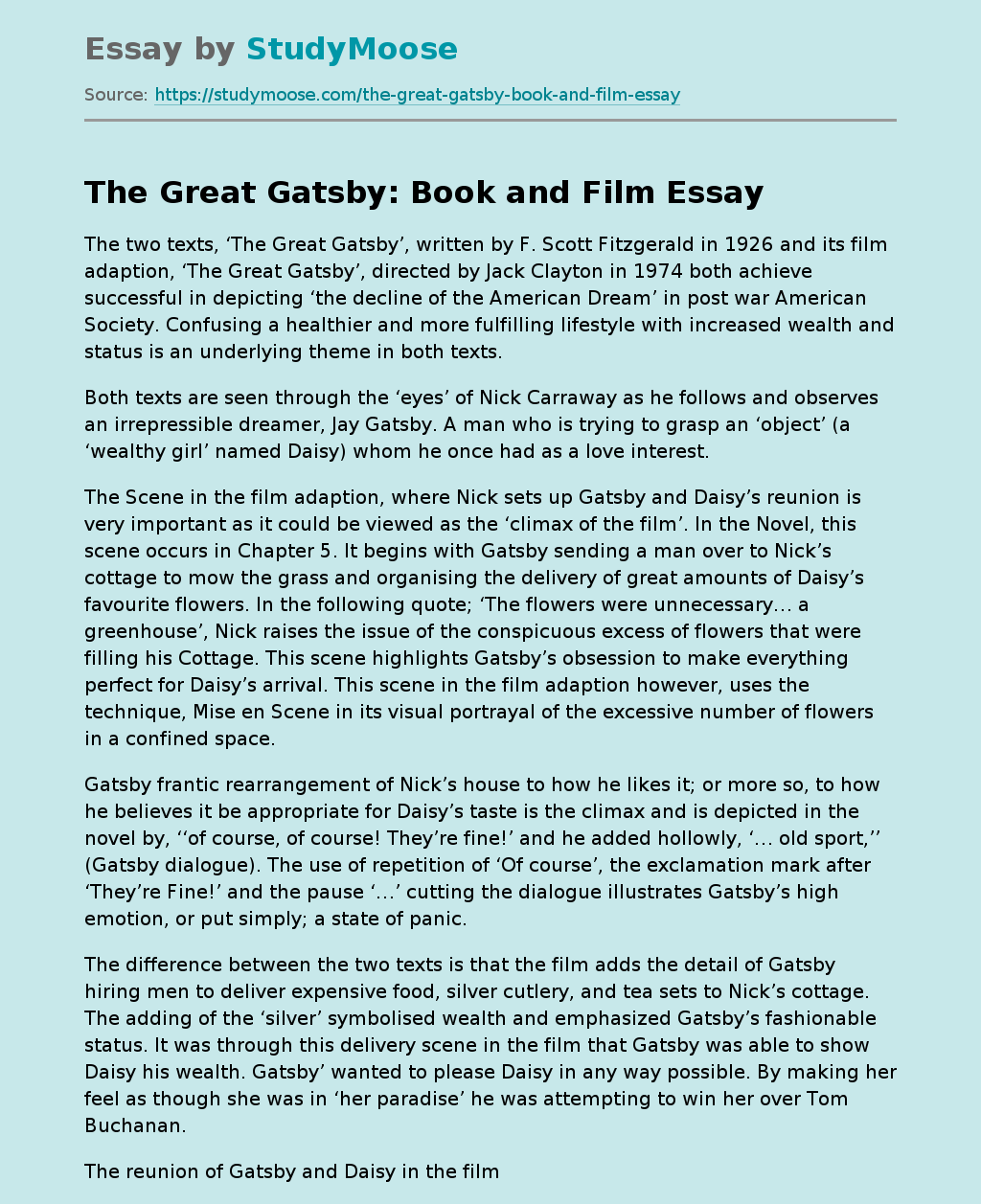