Relationship between Humans and Nature

The relationship between humans and nature is an important topic in which many people contribute ideas to and have done studies on. It is important for people to see that nature is a necessity and that we are responsible for protecting it. In essays and an article, John Steinbeck, Lynn White, Peter Kahn, Rachel Severson, and Jolina Ruckert discuss their beliefs and information they have found to be true about humans and nature living together.

In the article “Americans and the Land”, John Steinbeck talks about the American settlers’ impact on the land.

Don't use plagiarized sources. Get your custom essay on
“ Relationship between Humans and Nature ”
Get custom paper
NEW! smart matching with writer

He states that the relationship between humans and nature used to be one of settlers living with or against nature, but has over time come to humans living on or from the land. Steinbeck writes his feelings of humans being very irresponsible in their use of land back in a time when they thought there was an abundance of resources. He writes that people “burned the forests and changed the rainfall; they swept the buffalo from the plains, blasted the streams, set fire to the grass” (Steinbeck).

During the time of the Indians, humans attacked and defended themselves without giving thought to the damage they were causing to their environment around them. To go along with how little Americans thought about the environment, Steinbeck addresses how people went land-mad. Because they had so much of it, “They cut and burned the forests to make room for crops; they abandoned hyknowledge of kindness to the land in order to maintain its usefulness” (Steinbeck).

The idea of conservation didn’t much start until after engines and heavy mechanical equipment were in full use. And even since conservation and people finding awe and beauty in the nation’s national parks, most people don’t think twice about using engines and machines to keep us warm or cool, give us light, or transport us quickly. In response to this essay, I do have to agree that in the past people did not know about the damage they were causing on the earth. However, I disagree with Steinbeck when he says that people do not think twice about using all available technology. I know that through conservation efforts, most everyone is very aware of the impact they have on the environment. Although people are not as in tune with nature as the Native Americans were, I think we could learn from them and appreciate and take more responsibility for nature.

Lynn White, Jr.’s essay “The Historical Roots of Our Ecological Crisis” addresses the relationship between humans and nature by bringing up the issue of what Christianity tells people about their relationship with the environment. It is interesting that White brings up the component of religion in how people treat nature because it is a huge aspect that oftentimes doesn’t get talked about much. White states that Christians believe that God gave them dominance over nature and that it was given to serve man. Because of this dominance that we have, people feel indifferent about exploiting nature and using it to serve themselves.

Although I know this is true and is found in Genesis, I believe God intended it differently. I believe that just as God has ultimate rule over the earth and exercises his authority with loving care, he expects humans to do the same with the environment. God was careful in how he made the earth, and He wants us not to be careless and wasteful in how we take care of it. Although, I do agree that this mindset is a problem and has been a problem, so the best way to combat this is to teach Christians to dig deeper in to God’s word to figure out what exactly He means when he says something like that.

Peter Kahn, Jr., Rachel L. Severson, and Jolina H. Ruckert discuss the impact on humans of how technological nature is coming to replace actual nature in the essay. In the essay, they come to the conclusion that this replacement causes changes in the physical and psychological well-being of the human species. Kahn, Severson, and Ruckert state that nature is imperative to have in human lives. The authors did a study in which they found that simply looking outside of a window reduces heart rate which in turn reduces stress. Near the end of the essay, the authors discuss the issue of Environmental Generational Amnesia.

This is a condition that humans may face in which, because of “adapting gradually to the loss of actual nature and to the increase of technological nature, humans will lower the baseline across generations for what counts as a full measure of the human experience and of human flourishing”(Kahn, Severson, and Ruckert, 37). In a study, they figured out that technological nature is better than no nature at all. And they also know that humans have an evolutionary need to affiliate with nature, so we either have to adapt to technological nature, or go extinct. The authors know that talking to people about these environmental issues is becoming harder as most people aren’t aware of or simply don’t believe that they are a problem. I think that this was a very important study to do and shows people the importance and necessity of going out into nature.

The relationship between humans and nature is important to everyone because we really can’t escape the fact that we are living together. Knowing the history of why nature is so important to humans can help create a sense of responsibility for its well-being which in turn should unite people to try to make a difference in how we are treating it and using current technology. Because of Kahn, Severson, and Ruckert we now know that nature is something that humans innately need and that increases our health. Reading the ideas and conclusions of these authors about this topic has made me wonder about what my own stance on nature is, how my faith effects that, and if I am substituting technological nature for real nature.

Steinbeck, John. _Americans and the Land._

Relationship between Humans and Nature. (2016, Aug 12). Retrieved from https://studymoose.com/relationship-between-humans-and-nature-essay 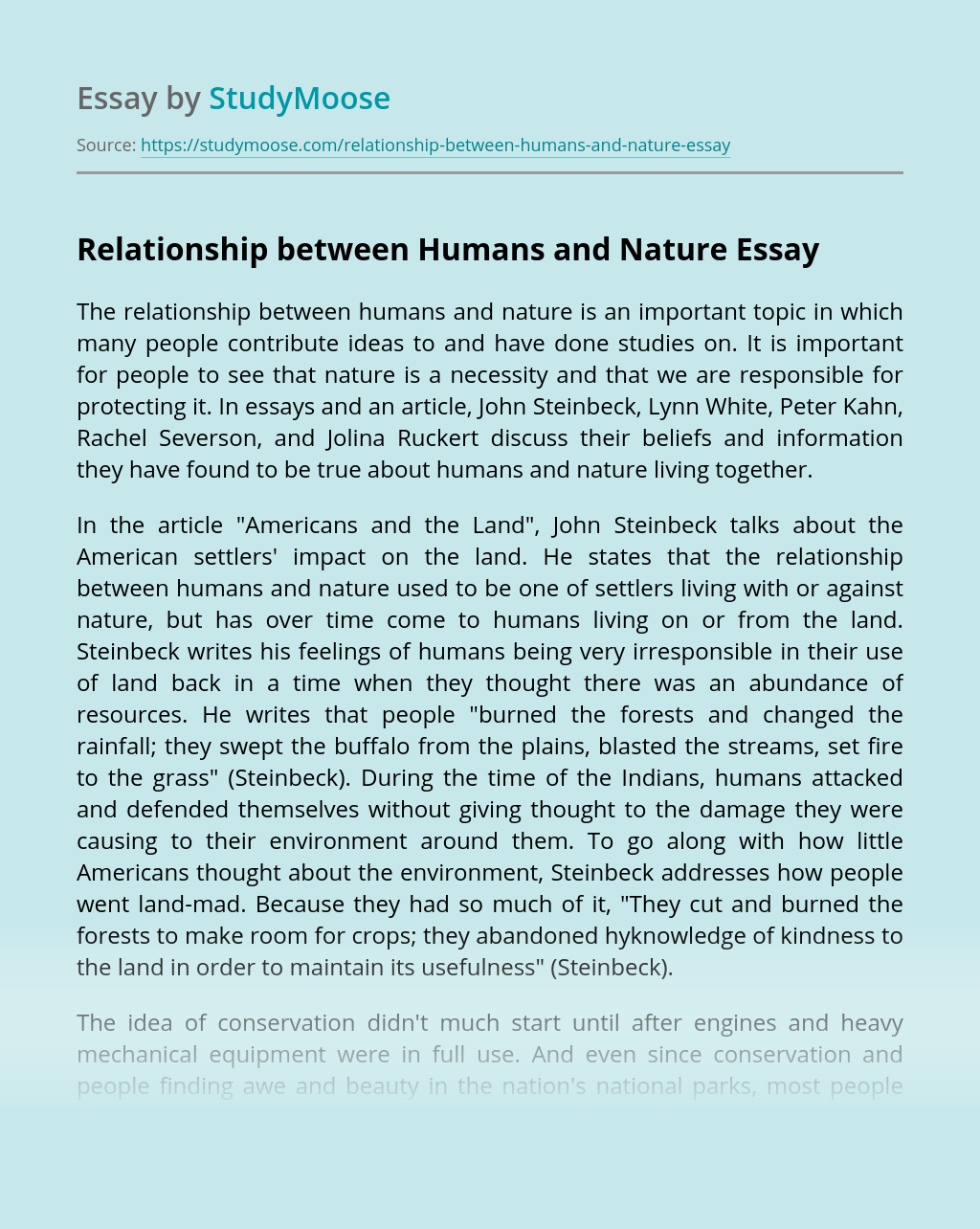