What is thought of as immoral to one person can be seen as ethical to another, and vice versa. This is due to the difference in the way humans perceive things, which is part of the intricacy of mankind. “During the time men live without a common power to keep them all in awe, they are in that conditions called war; and such a war, as if of every man, against every man. ” (Hobbes) Hobbes states that Humans are naturally evil and need a powerful government to control them.

Don't use plagiarized sources. Get your custom essay on
“ Human Nature – Are Humans Naturally Good or Evil? ”
Get custom paper
NEW! smart matching with writer

Rousseau thinks otherwise. “In reasoning on the principles he (Thomas Hobbes) lays down, he ought to have said that the state of nature, being that in which the care for our own preservation is the least prejudicial to that of others, was consequently the best calculated to promote peace, and the most suitable for mankind? man in the state of nature is both strong and dependent involves two contrary suppositions.

Man is weak when he is dependent, and is his own master before he comes to be strong.

” (Rousseau) The issue of good and evil is brought up in “Lord of the Flies” by William Golding, when innocent boys find themselves on a deserted island attempting to create a society similar to ours. What circumstances occur to them? How do past influences affect them? Are their actions good or evil? The actions of the boys were not a matter of being good or evil, but were actions for survival.

A person’s environment does not draw him towards good or evil, nor is he or she born with it inside.

Humans have instincts that are not affairs of good and evil, but of survival. By natural instinct, humans will do what is best for them especially for their survival. Animals, much like people, kill when in need. For instance, if they feel they are cornered, they would attack. If they need food, they will kill to eat. In “Lord of the Flies”, Ralph was being hunted by Jack’s tribe, and in a desperate attempt in his defense, thrusts his spear through a crack at the inspecting savages. Ralph attacked someone of his own kind for his own survival.

It can be believed that man is the derivative of others animals, and as such, they have certain instincts that were instilled from birth. The boys later began to simulate the behavior of animals. “At once the crowd surged after it, poured down the rock, leapt on to the beast, screamed, struck, bit, tore. There were no words, and no movements but the tearing of teeth and claws. ” (Golding 153) William Golding’s description of this scene leads a reader to believe that these boys acquired animal like qualities. Do you know of any human who tears with teeth and claws?

The boys mistake Simon for their beast and result in ruthlessly killing him. In their state of mind of savagery and hunting, they saw themselves in danger of this “beast” and their first instinct was to kill anything in sight that had the possibility of being it. Humans, like animals, have a natural instinct to protect themselves in case of danger, like attacking when cornered. Instincts are inherited, but indistinct characteristics such as good or evil are not. The significance of moral values do not apply to actions in situations for survival.

Instincts are not about being moral or immoral, because the issue of being good and evil is undefined. Whether an action or situation is good or bad depends on who it is and how it is being perceived. This makes this issue uncertain due to the way it is viewed from person to person. Since the way it is seen will differ, man cannot be exclusively evil or exclusively good. Consider the following example: A dog constantly jumps on the window of a door in an attempt to get the attention of the family inside. He is doing this in hopes to be let back inside the house.

Someone inside the house could view this as being evil, which would be different from the view of an animal lover. They would not consider this evil and would claim that the dog had not caused physical harm and just didn’t know any better. The dog doesn’t believe that it is evil because he is only obeying environmental charge. He’s been inside before and knows that it is much nicer than outside, and wants the attention that is inside. The dog has tried to jump on the door before, and had received the attention of someone who thus let him in.

This leads the dog to believe that what he is doing is the “right” thing to do. After all, he just wants in, right? So the dog is evil because someone inside says he is, but then he is not evil because he doesn’t think he is. The opinions on what is evil and what isn’t disagree with each other because of how it was perceived by each side. In “Lord of the Flies” there is a situation that deals with Piggy’s glasses, which is the key to fire on the island. The glasses were stolen in the middle of the night that leads to a fight in the dark among the boys.

The fact that the glasses were stolen, and they were Piggy’s only aid for sight, can be seen as evil, but what about Jack’s side? Jack acts upon his devoir to light a fire in order to cook the pig he killed with his tribe to fully enjoy their prize. Ralph and Samneric engage in a fight with whosoever they can touch first, without an attempt to reason. Which is evil in this situation? Humans are simply complex animals that respond to complex impulse, and their behaviors are influenced or are a product of everything that they learn starting from the day of their birth to the day of their death.

Society sets a mold for the “good” and “bad” conditions that humans are learning from day to day. The role of society in being good or evil is that it acts as this guideline for that long lived dream of acceptance. It’s where what’s good gets you in, and what’s evil is what will make you repulsive. The ideas of power and the abuse of that power are not learned from the environment. The environment is used as a resource to abuse that power. Jack manipulates the boys into joining his tribe and sets up his territory on the island.

He threatens people to join his tribe, and hunts those that refuse to. Jack’s tactics are an example of how he abuses power by using the environment and how he sets the society guidelines of acceptance. A society could not exist where people are brought up to know what they define as right or wrong, and could stick to that without problem. “We decide things. But they don’t get done. ” (Golding 79) On the island, the civilized rules of having drinking water, shelters, and having a spot for a lavatory are not followed.

The boys were brought up having rules like these, but they did not stick to them due to the problem that they didn’t have a strong enough authority figure to instill them. Society acts as this necessary component to life, and if it’s not there then it needs to be made. The creation of society begins with people who have the power to set the rules of acceptance, and they are the ones who establish what is good and what is evil. Society may manipulate others into believing what is good and evil, but those that manipulate society create that belief.

In conclusion, Hobbes and Rousseau are both, in a sense, right and wrong. Hobbes said that human nature is evil and need to be controlled while Rousseau said human nature is good and need to govern themselves. It’s not that humans are innately good or evil, it’s their natural instinct that drives them to do immoral or ethical deeds based upon what society leads them to believe. People cannot exclusively be good or evil because the state of good and evil is undefined. People are born with an instinct that drives them to do what is necessary in extreme measures.

This instinct overtakes any other preceding thought and becomes the need for survival. In Lord of the Flies, it wasn’t whether or not the inhabitants were evil or good, it was their human reaction and instinct in the case of survival. Golding, William. Lord of the Flies. New York, NY: Putnam Group, 1954. Hobbes, Thomas. Leviathan. Ed. J C A. Gaskin. Oxford, NY: Oxford UP, 1998. Rousseau, Jean Jacques. The Social Contract and the First and Second Discourses. Ed. Susan Dunn. Binghamton, NY: Vail-Ballou P, 2002. 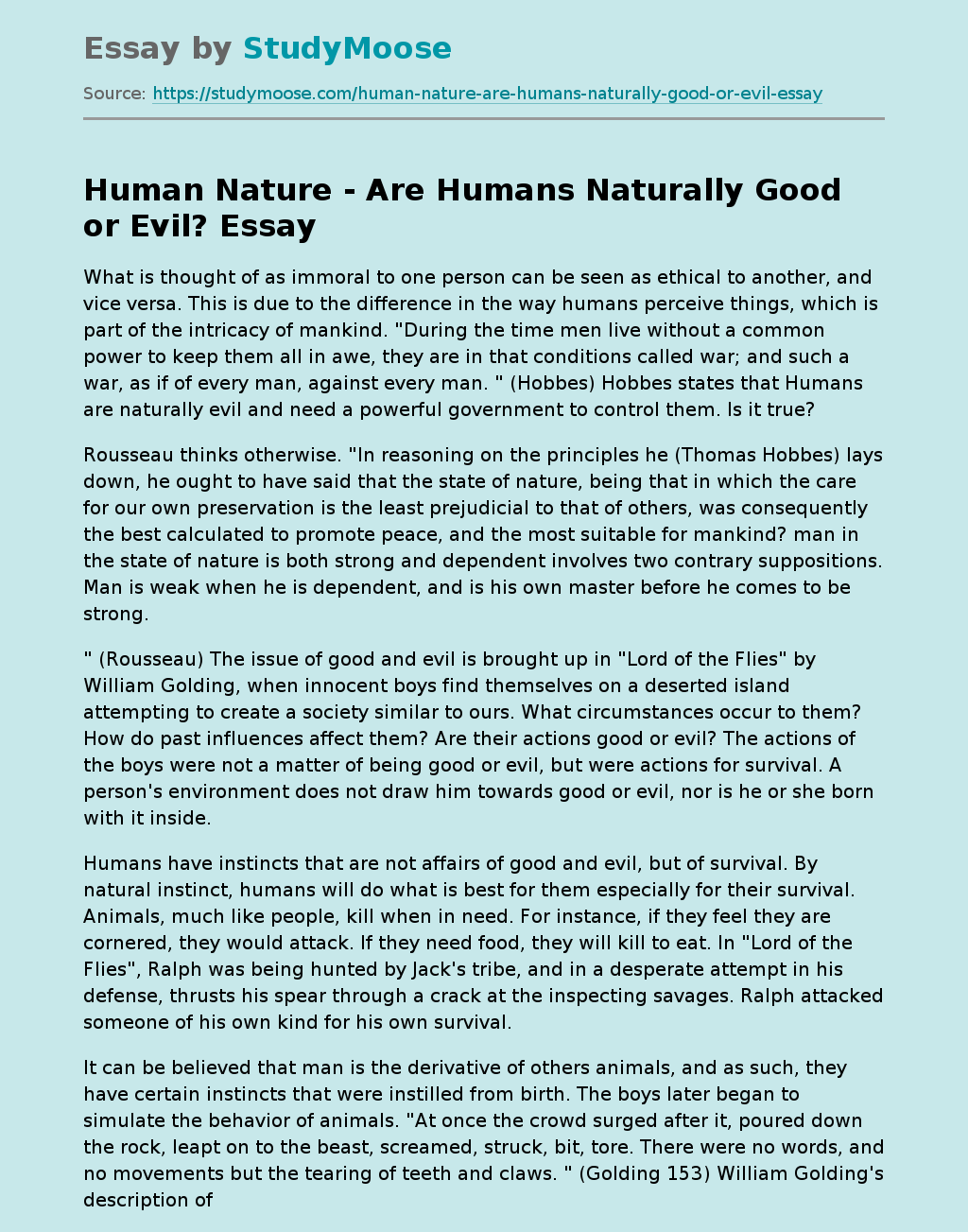