Most Dangerous Game with the Lottery

The Most Dangerous Game, by Richard Connell and The Lottery, by Shirley Jackson portray the common theme that people remain indifferent to cruelty until they are the recipients of it. Both stories show that when the darker side of human nature centers on itself, evil prevails showing how man is innately evil and that convictions and morals can be compromised by circumstance. Both authors show that through both societal standards and learned behavior, many injustices and cruelties can be accepted as normal behavior.

Don't use plagiarized sources. Get your custom essay on
“ Most Dangerous Game with the Lottery ”
Get custom paper
NEW! smart matching with writer

In The Most Dangerous Game, Connell describes Rainsford, the protagonist, as a renowned hunter. Connell uses the opening conversation between Rainsford and Whitney, Rainsford’s companion on the yacht, to enlighten the reader to Rainsford’s attitude of indifference concerning the prey that he hunts. As fate would have it, Rainsford is marooned on an island where he meets another hunter, General Zaroff. As the story progresses, Rainsford begins to see the façade of civility disappear and the real nature of the General come to surface.

The General explains how hunting man is the logical progression of their art and that they are actually kindred souls. Rainsford is appalled by the comparison of their two natures and clings to the moral high ground. That is until the General forces Rainsford to now become the prey. Rainsford, now the prey, calls upon not only his vast knowledge and experience of the hunt but also his primeval instinct of survival. Connell takes the reader through many twists and turns giving hope for Rainsford around each corner only to take it away.

Due to the cunningness and resourcefulness of Rainsford, the General is given literally the best hunt of his life. In the end, Rainsford outsmarts the General and kills him in the end. In The Lottery, Jackson gently weaves the reader into what seems at first to be a typical small farming community with a special event taking place. Jackson portrays how the event had lost most of its pomp and circumstance over time and that many of the townspeople were there out of tradition.

The protagonist, Mrs. Hutchinson, is introduced in the middle of the story, rushing up to the crowd commenting how she had almost forgotten what day it was. As the names in the box are read, the heads of household robotically accept their papers. When the papers are revealed, Bill Hutchinson, Mrs. Hutchinson’s husband, discloses he has drawn the back dot. Mrs. Hutchinson’s demeanor now changes from nonchalant to seriousness as she protests that it wasn’t a fair drawing. Now as the Hutchinson family draws another paper from the box, Mrs. Hutchinson fatefully draws the black dot. The townspeople then began to pick up stones from the pile as Mrs. Hutchinson pleads with them that it isn’t fair. The townspeople then converge on her, stoning her. Both writers arrive at the same two-part conclusion although taking different routes.

Connell shows at first how Rainsford is indifferent to the game that he hunts merely for pride. Jackson likewise shows the nonchalantness of Mrs. Hutchinson to the lottery and it’s repercussions at the beginning of the ceremony. Only with the introduction of dire circumstances to both characters do they begin to examine what at one time they would have considered one of their core beliefs. Both authors then confirm that the evil nature of man is more natural of a path to take than a moral one. Connell shows this by ending the story with Rainsford sleeping in the General’s bed, leaving the question for the reader if Rainsford has now become the General. Jackson also confirms this by telling how even the small child of the Hutchinson’s is given stones to throw at his mother.

In comparison of both stories the authors convey that man is inherently evil and that choices made based on societal standards, traditions, and learned behavior may not be the morally correct choice. This confirms the passage of Scripture from Jeremiah 17:9, “The heart is deceitful above all things, and desperately wicked: who can know it?” (KJV) Man’s very essence is that of evil and selfishness.

Most Dangerous Game with the Lottery. (2016, Jun 08). Retrieved from https://studymoose.com/most-dangerous-game-with-the-lottery-essay 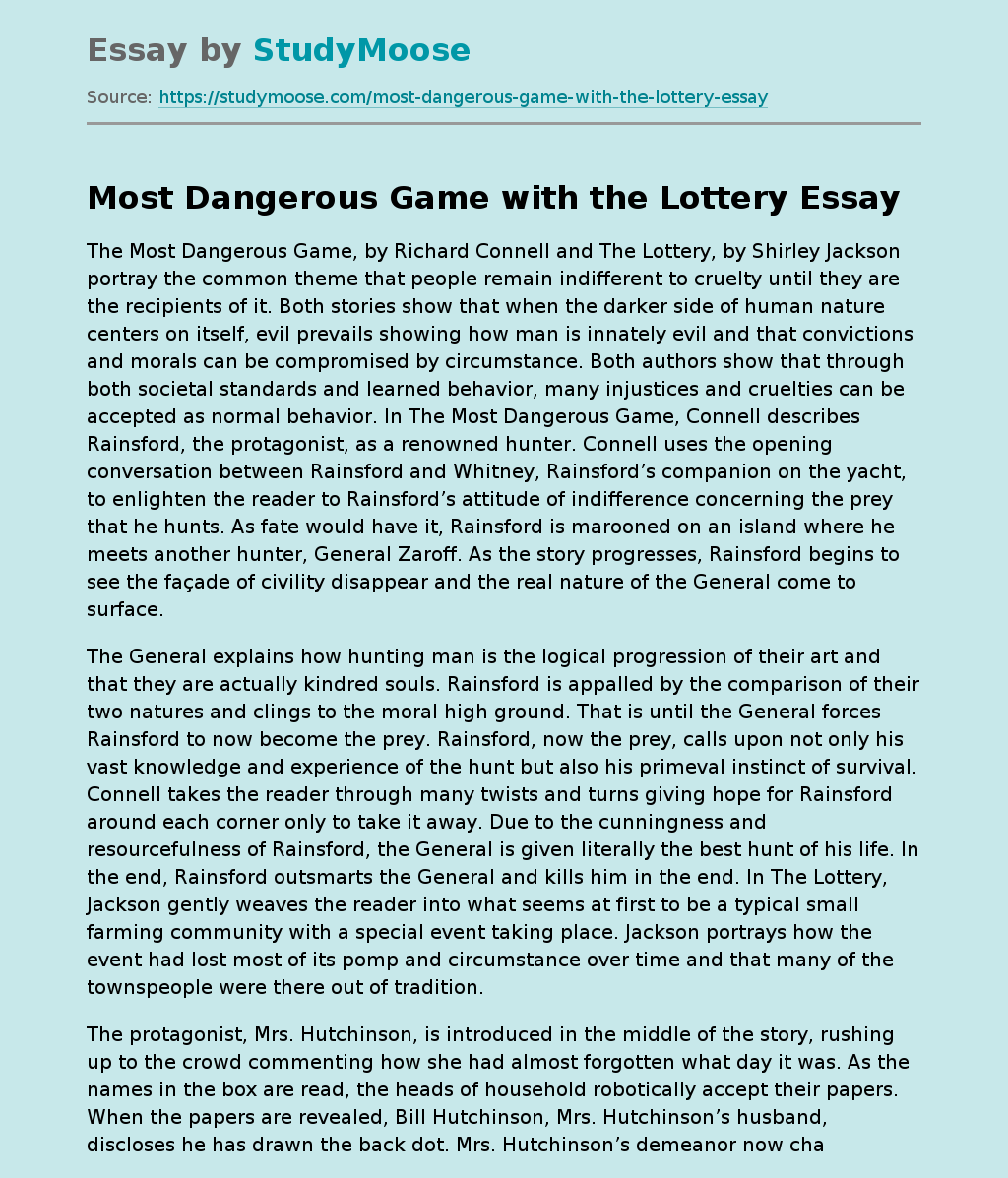