Macbeth and the Nature of Evil

In Macbeth Shakespeare explores one man’s crippling ambition and the mixed effects of evil on him. Through their prophecies, the witches plant an evil seed that will plague Macbeth’s mind, with repercussions, not only for Macbeth and the king but his family and the entire nation of Scotland. Shakespeare portrays a tyrannical, impulsive king who no one is safe from. Both Macbeth and Lady Macbeth betray their morals and honour and eventually, along with many others, pay the ultimate price.

Don't use plagiarized sources. Get your custom essay on
“ Macbeth and the Nature of Evil ”
Get custom paper
NEW! smart matching with writer

This audience is left in a constant state of judgement and sympathy.

The effective nature of evil is evident from the beginning of the play, in act one scene one the witches are extremely purposeful in using their supernatural powers and implanting evil thoughts into Macbeth’s mind. The witches use the motif “fair is foul and foul is fair” in order to create moral havoc within Macbeth’s mind and target his ambitious nature. Macbeth later says “the supernatural soliciting/cannot be ill cannot be good.

” In this paradox, he is suggesting that the supernatural cannot be bad, but it can’t be good either. This is the only real resistance of his ambitious temptations. After some mulling, he is overcome captivated by their prophecies. “I stood rapt in the wonder of it.” It is his vaulting ambition that eventually overcomes his sanity. It is this ambition that compels him to put behind his fears and morals. Even after he commits the regicide of King Duncan he still falls back on the witches for an unjustified sense of confidence.

Thus, Macbeth is judged for his weak nature in response to the witch\’s evil.

Lady Macbeth continues the evil influence started by the witches, said effects will have an immediate effect on Macbeth and long term effects on Lady Macbeth. Shakespeare depicts the massive transformative and convincing power of Lady Macbeth’s evil in “top – full of Direst Cruelty” when she encourages Macbeth to murder King Duncan. She is extremely manipulative of Macbeth, questioning his manhood and suggests he is cowardly. Even saying that she would have ripped her own child from her breast and “dash’d the brains out” to be king. This example of vivid imagery intimidates Macbeth and convinces him that he must do the manly thing and kill the king. After the murder her belief that a “little water clears us of this deed,” the irony of this is evident later when she becomes fixated on the blood that she cannot rid from her hands. Therefore, the evil unleashed from Lady Macbeth ultimately represents the short and corrosive long terms that evil has.

The influence of both Lady Macbeth and the Witches eventually force Macbeth into succumbing into evil and its potential of extreme upside. This foolish decision culminates in this example of alliteration when he renounces his scepticism and considers the “deep and dark desires.” His conscience is fully active in the play, he knows about the “even-handed justice” and “justice” which controls most in debates of good and evil. He is also aware that “Bloody instructions return to plague the creator.” Shakespeare employs the use of religious imagery here to illustrate that Macbeth is aware that there will be repercussions for his actions, whether they are physical or his conscience tormenting him. Despite this internal conflict Macbeth still commits the regicide of King Duncan. Thus, showing the overpowering nature of evil.

Macbeth cannot even enjoy his royal status and once enthroned becomes heavily paranoid. Owing to his aforementioned conscience Macbeth’s guilt takes over leading him to strange hallucinations and “strange self-abuse.” In this Shakespeare uses foreshadowing to illustrate Macbeth’s obsessive fear of everyone around him. He attempts to fight fear and become fearless by just killing anyone in opposition to him. He states ““t’is the initiate Fear that wants hard Use,” this portrays his jump to a cruel tyrant who will stop at nothing to maintain his power. He becomes so paranoid that he sets spies on his thanes and kills Macduff and his entire family in an attempt to make “assurance double sure.” Shakespeare forms this sentence in iambic pentameter to emphasise the importance of the message. Moreover, the evil continues to thread throughout Scotland and even Banquo is affected by the evil. He dismisses’ the witches despite them predicting that his son will become king. Therefore, the nature of evil is shown here as it causes the corruption of a king and the slaughtering of many of his innocent subjects.

As the theme suggests, it is a tragedy. A great number of lives are lost due to one couple’s unrelenting ambition and their weakness to resist evil. They both let the evil overcome them and thus cannot enjoy the position that they worked so hard to get to. Their reign turns tyrannical and they kill many who used to be friends. No one can escape. The citizens are so relieved by his death they don’t morn. To conclude, the nature of evil is obvious as it leads to the rise, brutal reign, and fall of a once noble hero.

Macbeth and the Nature of Evil. (2020, Oct 08). Retrieved from https://studymoose.com/macbeth-and-the-nature-of-evil-essay 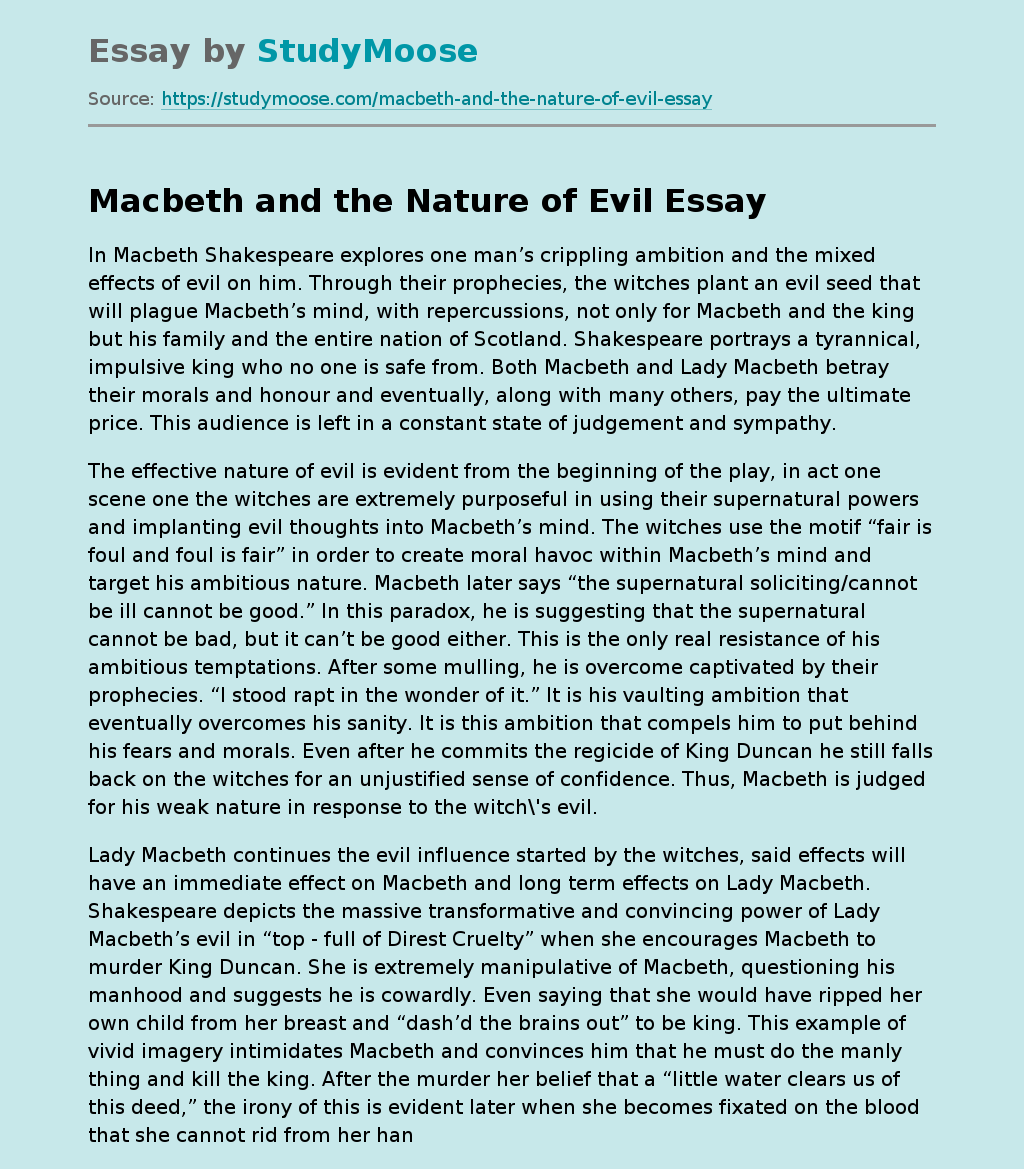