Lady Macbeth As A Catalyst To Evil

The expression “behind every man, there is a woman,” rings true even in the Shakespearean tragedy Macbeth. Lady Macbeth is the catalyst that ignites the fire to Macbeth’s ambition. It is because she challenges his masculinity, questions his love, and belittles his bravery that Macbeth murders Duncan. His lady provides impetus for him to abandon all honorable nature in order to achieve what they both desire. Macbeth would not have murdered Duncan and continued on a downward spiral of evil were it not for the extra push from his ruthless and overly ambitious wife.

Don't use plagiarized sources.
Get Your Custom Essay on Lady Macbeth As A Catalyst To Evil Just from $13,9/Page

Macbeth is filled with great hubris. Lady Macbeth plays on this pride when she challenges his masculinity. She goads him by saying, “When you durst do it, then you were a man / [. . .], you would / be so much more the man.” (Shakespeare, Macbeth. 1.7.49-51). Lady Macbeth tells her husband to kill Duncan to prove that he is a man, and states how much more of a man he will be as king.

Eugene M. Waith states in his criticism Manhood and Valor in Macbeth, that “the pangs of Macbeth’s conscience [. . .] are no more than effeminate, childish fears to Lady Macbeth.”(64) She has a great deal of power over Macbeth; this power is the mere truth that she possesses more of a manly quality that he himself does.

Macbeth is ambitious enough to want to become king, but would not think of murdering Duncan. Because Lady Macbeth knows this, she understands the necessity to push Macbeth into performing the deed. She does this by questioning his love for her. ” What beast was’t then / that made you break this enterprise to me?/ [. . .] I would, while it was smiling in my face, / have plucked my nipple from his boneless gums a/ nd dashed the brains out, had I sworn so as you / have done to this.” (Mac. 1. 7. 47-48. 55-58) In saying this, Lady Macbeth proves her devotion to her lord and asks him to do the same. Lady Macbeth tells him that his love is worth nothing if he refuses to go through with the plan, “[. . .] saying that his love is as accountable as his indecisiveness.” (Macbeth and Lady Macbeth Switch Roles. www.planetpapers.com) Macbeth wants his wife to love and trust him, so he follows through with their plan.

Macbeth is brave when it comes to thought, but when it comes to action he is somewhat of a moral coward. Lady Macbeth bullies her husband into the action that will gain them the throne. The final way she badgers Macbeth is by deprecating his bravery. “We fail! / But screw your courage to the sticking-place / and we’ll not fail.” (Mac. 1.7. 59-61) Macbeth views himself as the epitome of bravery and upon hearing these words from the woman he loves, he succumbs to their ambitions.

Lady Macbeth taunts him for his cowardice, “under the weight of her reproaches of cowardice he has dared do more, and has become less [. . .]” (Brooks. 45). Throughout the Renaissance, the idea that to be courageous is to be a man prevails. At the beginning of the play, Macbeth represents the ideal Elizabethan hero; therefore, bravery is an important character attribute. Lady Macbeth’s ruthlessness and manipulation of Macbeth causes him to defy his true principles and to murder Duncan.

From the beginning of Act One Scene Five, until after the murder of Duncan, it is evident that Lady Macbeth manipulates and convinces Macbeth to do evil. Lady Macbeth knew that he would never go through with it alone, she realizes that he holds too much of the “milk of human kindness” (Mac. 1.5.12) to ever complete such an appalling feat. Lady Macbeth uses persuasion to coerce her husband. Had she not mocked his masculinity, challenged of his love, and vilified his bravery, Macbeth would not have been pressured into the murder of his king and thrust onto a path of malevolence led by ambition.

Lady Macbeth As A Catalyst To Evil. (2016, Jul 13). Retrieved from https://studymoose.com/lady-macbeth-as-a-catalyst-to-evil-essay 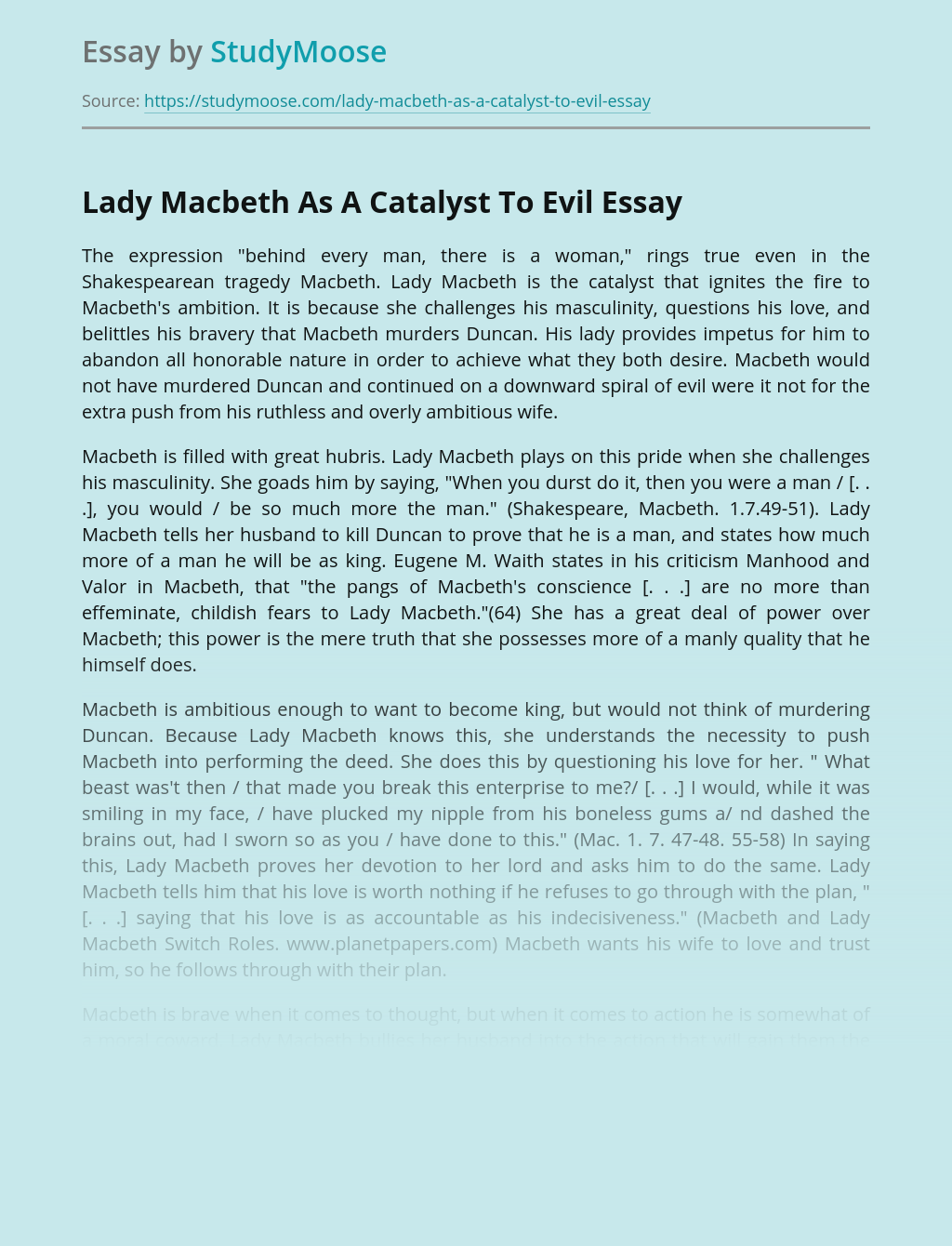 Rate this post To be regarded as a great king involves many important factors such as being honorable, gracious, and fair. It is far more difficult to regard a king as being great than as being a failure. In Macbeth there are examples of great kings as well as failures as kings. Duncan is a...

?A Discussion of Heroism in Literature and Film

Get Essay
Role and evolution of the hero in literature

Rate this post ” If Hero means sincere man, why may not everyone of us be a Hero?” (Carlyle, qtd. in Hoyt’ s New Cyclopedia of Practical Quotations). This statement makes heroism seem simple, but is being sincere enough to make you a hero? In modern society, the answer is likely to be yes, but...

Rate this post Good stories oftentimes have well-written heroic characters. That is because the hero functions as the character with whom the readers relate to. The significant role of the hero is that he is the one who communicates the experience within the narrative. But what if the central characters of a good story are...

Rate this post Macbeth is a play that examines human nature. During the play there is a significant amount of emphasis on the different attributes and sides of human nature. The play demonstrates that everyone has the ability to do good or evil by what choices they make and what the ramifications of these actions...

Rate this post “Choose a play in which there is a conflict between key characters. Explain how the conflict arises and, by referring to appropriate techniques, go on to say how the conflict adds tension to the play, and whether is it resolved.” William Shakespeare’s shortest tragedy ‘Macbeth,’ charts the rise and fall of the...

Rate this post A human virtue that I find to be an essential property to life is guts. Some of the qualities of nerve is; bravery, determination, honesty, generosity, and zest. I believe that guts is an important virtue since there are numerous things in life that individuals have to go through every day where...