Concept of Evil in Macbeth by William Shakespeare

Evil as a influence over human nature is an interesting concept presented by Shakespeare and is best seen in the protagonist’s character development throughout the play. Macbeth at the start of the play is a highly esteemed member of society and seems the epitome of a loyal subject, loaded with honors, whom valiantly fights rebelling forces to protect the king and preserve the king’s power. As a whole, Macbeth has it all including a loving wife and secure home in his castle in Inverness, and he ultimately is a man described as being “full of the milk of human kindness” (1.

Don't use plagiarized sources. Get your custom essay on
“ Concept of Evil in Macbeth by William Shakespeare ”
Get custom paper
NEW! smart matching with writer

5.17). Macbeth’s merits are further acknowledged by other characters who say that the brave Macbeth “carv’d out his passage” (1.2.20) through the enemy till he reached the traitor Macdonald, “unseamed him from the nave to th’ chops, / And fix’d his head upon … [the] battlements” (1.2.22 23).

These acknowledgements by other characters within in the play illustrate Macbeth to audiences as being a man with remarkable abilities.

With this depiction in mind, Macbeth initially is described and portrayed by other characters in such a way that he appears to be the ideal hero. But when audiences physically meet Macbeth and Banquo, there is an interesting contrast that belies the depiction of the great hero that was initially described. The first words spoken by Macbeth are the words, “So fair and foul a day I have not seen” (1.3.36) which in a lot of ways echo the “Fair is foul, and foul is fair” (1.

1.10) that audiences hear from the three witches in scene one and this in a lot of ways can be seen as a link between the characters. The link between Macbeth and the three witches highlights the evil which lingers within Macbeth’s heart and foreshadows his less than favorable character development to come. Upon his meeting with the three witches, the trio greet Macbeth with three titles: Thane of Glamis, Thane of Cawdor, and king hereafter (1.3.46 48) and at his insistence from hearing these titles Macbeth demands of them to tell him more of his future.

The trio obliges and when Macbeth hears their words he does not hear them with that of the detached skepticism seen by Banquo but with a kind of fear. For him, this is not a revelation of the future but an invasion of his private, hidden thoughts. What this particular scene does is shows that it is not the witches themselves that compel Macbeth but rather his ambition which seduces him away from the esteemed character initially introduced and towards the tragic hero that is revealed. Macbeth’s instantaneous willingness to achieve the title of King immediately showcases how his ambition is a crippling trait and as a true tragic hero that is given an ultimatum he chooses the wrong one. The evil, his ambition, is what ultimately overpowers Macbeth and leads to the gradual destruction of Macbeth’s human feelings. An important note is that Macbeth demonstrates that he knows right from wrong when he shows he is fully aware of God’s moral system with its “even handed justice” (1.7.10). Macbeth’s humanity is gradually destroyed not only because of where his flaws have led him but because of his understanding between right and wrong. His guilt over his decision to seek ambition and kill Duncan is what turns him into the unnatural man that is cut off from humanity and from God at the end of the play. With this ultimate awareness this is in itself what defines Macbeth as a tragic hero because he knows all the right choices but decides due to his demons, and the presence of evil over his life, to make all the wrong ones.

Considering the evil in which Shakespeare introduces within the play it is important to see how evil presents itself within human nature but it is also important to see how Shakespeare goes on about showing the presence of evil in the world itself. The evil depicted in the play by Shakespeare is the evil of one’s inner demons. It is easy when looking at the play to become lost in the outside factors which hold influence over Macbeth such as the three witches and his wife but none of these factors are what cause Macbeth to commit the crimes that lead him on his tragic journey. What leads Macbeth on the path he embarks on is the evil that he grapples with as far as his human nature goes. That is not to say that the outside influences around him are not innocent in the events that take place however. Without this evil in the world to bring forth Macbeth’s inner thoughts, then there would be nothing to motivate the protagonist into obtaining his selfish desires. What audiences need to note about the outside influences, in reference to the witches specifically, is that supernatural and unnatural forces act as agents of human beings, not as their instigators. What this means is the witches only bring to light what was already in Macbeth’s heart.

When looking at Lady Macbeth as an outside influence, it is important to note that she herself is overcome; similarly, by evil that her husband is. Being that Lady Macbeth is human as well, she herself is overcome by the guilt that is caused by her evil that hovers over her. But it is Lady Macbeth’s influence over her husband which acts more like Macbeth’s justification for his actions. Because his wife is telling him to go through with his crime, her influence is more so an excuse for Macbeth and only acts as a voice in which repeats the reasons in which he himself believes undergoing such villainous acts would be beneficial to himself.

Concept of Evil in Macbeth by William Shakespeare. (2021, May 01). Retrieved from https://studymoose.com/concept-of-evil-in-macbeth-by-william-shakespeare-essay 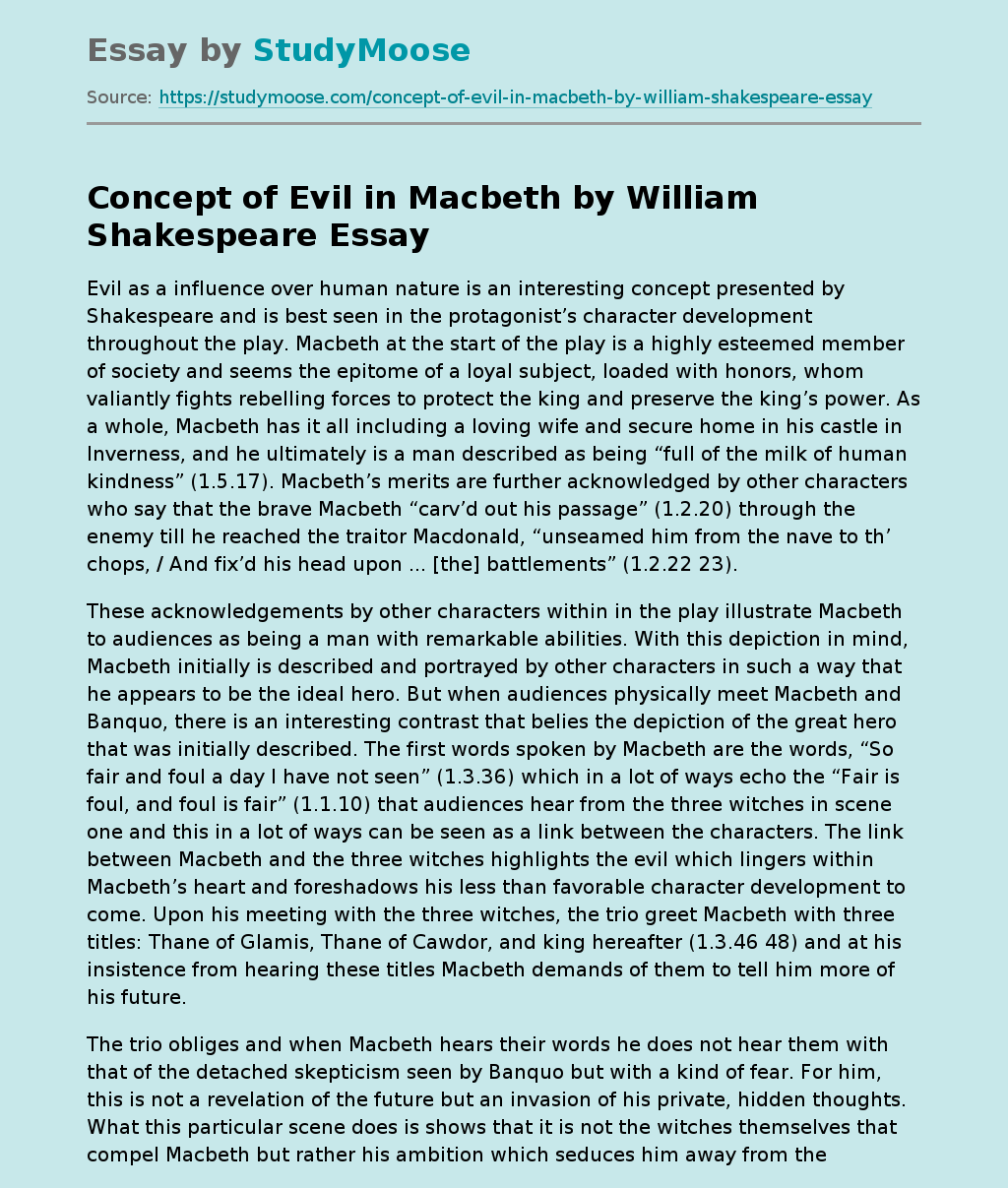