Paranoia in Macbeth by William Shakespeare

William Shakespeare wrote many playwrights during his lifetimes, one of them being The Tragedy of Macbeth in 1604. This play includes many motifs of double talk, blood, darkness, sleeplessness, and visions. Shakespeare talks about how Macbeth and Lady Macbeth’s morality and loyalty change throughout the storyline when they encounter the hardships of guilt after murdering King Duncan of Scotland.

To begin, Shakespeare included three witches whom used double talk to predict how Macbeth’s thoughts and actions will change along the way.

Don't use plagiarized sources. Get your custom essay on
“ Paranoia in Macbeth by William Shakespeare ”
Get custom paper
NEW! smart matching with writer

After Macbeth defeated the scottish traitor, Thane of Cawdor, he proved his loyalty to the kingdom which became relevant when the witches said in unity, “Fair is Foul and Foul is Fair,” (I, i, 10). The witches say this upon Macbeth’s name because his bravery and devotion to his King is fair but will eventually become foul. Meaning, that appearances can be deceiving, being the underlying theme for Macbeth until the end. Another instance where Macbeth is challenged by guilt is after he murders Duncan in his sleep and hears a voice cry, “Sleep no more! Macbeth doth murder sleep,” (II,ii,46-47).

He hears this cry out of paranoia and bring tremendous guilt upon himself which destroys his ability to differ reality from his own imagination. By killing the king, Macbeth has been left thinking that if a good and just king can be murdered in his innocent sleep, what can be done to him who is no better, causing insomnia. Towards the end of the play, he doesn’t let guilt control him, rather makes him more arrogant and reckless, especially in the instance when he says, “Strange things I have in head that will to hand, which must be acted ere they may be scanned,” (III, , ).

Macbeth has strange thoughts that he plans to carry out but needs to do it before he feels the heavy weight on his shoulders. Because he is no longer thinking of what trouble his actions will cause, it will make him cold and evil. Without a doubt, Macbeth’s character evolutionized from moral to dishonorable, showing the different types of effects that guilt had on his conscience.

Similarly, Lady Macbeth went through the stages of guilt which drove her mad. In the beginning, Lady Macbeth was persistent, fearless and cold hearted, unlike Macbeth, a quote that shows this is, “He is too full o’ the milk of human kindness,”( , , ). She thinks that Macbeth lacks the courage to follow through with killing King Duncan to steal his throne. It becomes a significant part in the play after fear begins to control her. Further into the storyline, Lady Macbeth sleepwalks and during it she yells, “Out, damned spot!… Hell is murky!… yet who would have thought the old man to have so much blood in him,” ( , , ). Her guilt has filled her consciousness so much that even in her sleep, she replays her role in the murder of the king. Washing the blood off her hands symbolizes how desperate she is to get rid of that terrible memory. Finally, a doctor comes in to see her state of being and while she is sleepwalking, he says, “Infected minds/ To their deaf pillows will discharge secrets,” ( , , ). Causing suspicions of her involvement with King Duncan because she reenacts the evil deeds in her sleep. Thus, being the cause of her own death, suicide. These quotes all represent the way Lady Macbeth handled the struggles that come with guilt.

When the witches predict Macbeth’s destiny, his desire for power grew stronger and stronger leading him to becoming the foul man that he never used to be. But in the end, dying a fair death, as well as Lady Macbeth who essentially punished herself for being malevolent. The Tragedy of Macbeth written in 1604 by William Shakespeare definitely demonstrates how evil doings, even thoughts can deteriorate the human consciousness.

Paranoia in Macbeth by William Shakespeare. (2021, Oct 13). Retrieved from http://studymoose.com/paranoia-in-macbeth-by-william-shakespeare-essay 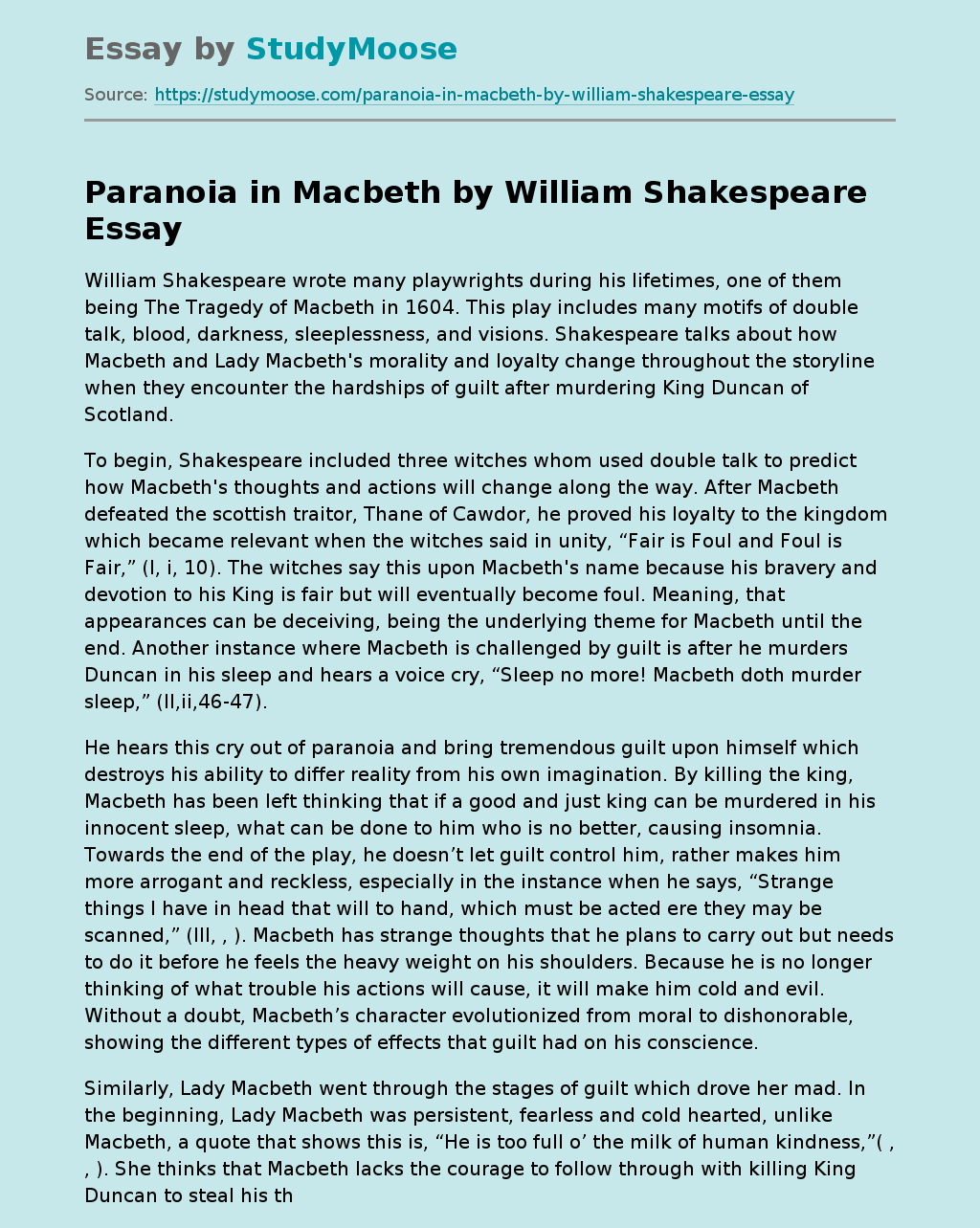