PHYSICALLY, the elderly are not longer as able and agile as the young.

To most old people, walking can be an ordeal – and crossing the road is even more difficult without help.

While it is already hard for most of the aged to get to the other side of a busy road that has no pedestrian crossing, what is even sadder is that motorists seldom stop for them.

Old people whose sense of judgement is impaired through ageing, are frequently run over on the road.

Don't use plagiarized sources. Get your custom essay on
“ Elderly need care, not neglect and indifference ”
Get custom paper
NEW! smart matching with writer

They can no longer handle heavy traffic, and left to their own devices, are likely come to grief.

As one observer notes, it seems modern society is built by the young for the young – a dynamic creation that does not give much consideration to the old, sick, handicapped or disabled.

The infirm and frail elderly are usually tolerated as a liability or nuisance, and with self-esteem ripped away from them, they suffer in silence as they go through what is left of their twilight years.

This busy world is certainly not looking too kindly on old folks. Crossing the road is just one problem the elderly encounter, another is getting onto a bus. The old timer is usually the last to get on. And even if he manages, he very likely will have to stand. Rarely does anyone care give up his or her seat for an old man or woman.

In the old days, the family unit was strong. Today, it is breaking up as young men and women travel widely in search of greener pastures.

Normally, what this entails is neglect – with the elderly being left to fend for themselves, most times under very difficult circumstances.

The more fortunate ageing parents may have a child or two staying with them while the less lucky ones may have to live out their lives in an old folks’ home – or in their empty house after all the children have flown the roost and may only return to visit once in a blue moon.

Such a situation poses a very real problem for society and it is what the old dread most – being unwanted and uncared for while on borrowed time.

There are other problems old folks face but none can be as painfully heart-breaking as the indifference and neglect shown them by their own flesh and blood.

Most senior citizens end up in welfare homes because they are abandoned by their families – frequently at public hospitals which, in turn, have little choice but to turn them over to shelters run by the government or NGOs.

In most cases, family members refuse to take their elderly parents back. Invariably, these public hospitals have to hand the abandoned old folks to NGOs. Even so, shelters, run by benevolent societies, are mostly full these days.

According to the Social Welfare Department, between 2008 and 2011, the number of old folks, abandoned by their families, has steadily gone up one per cent each year. Welfare homes caring for the 60 and above, admitted 340 senior citizens last year compared to 248 in 2010.

It is, of course, unfair and incorrect to say all young people desert their parents in their old age. What is obviously a disturbing trend though is that a lot of sons and daughters are leaving their ageing parents to die at old folks’ homes. Why?

In trying to look for an answer, sociologists argue it is important for society to understand the needs of young people with changing times.

These experts explain that young couples nowadays need to work to support themselves and their own growing families. As such, most not only send their old parents to welfare homes but their own children to nurseries or playschools as well just to keep up with the rat race.

While it’s reasonable for young families to want their own space and privacy, there are some who simply do not want to look after the elderly due to what is generally referred to as the generation gap manifesting itself in the lack of understanding and tolerance for the changes in their parents’ behaviour which could be caused by insecurity and mental illnesses.

Whatever the reasons that may have caused the young to shirk their responsibility of caring for their elderly parents, they, nonetheless, still have the moral responsibility to support and cherish them.

After all, the young will themselves become parents and grow old one day – and quite naturally, also expect their own brood to look after them in the final phase of life.

Needless to say, it’s important to inculcate filial piety in children at a young age. Wholesome family values such as caring for the elderly spontaneously out of love should be continuously fostered to create a truly caring Malaysian society. 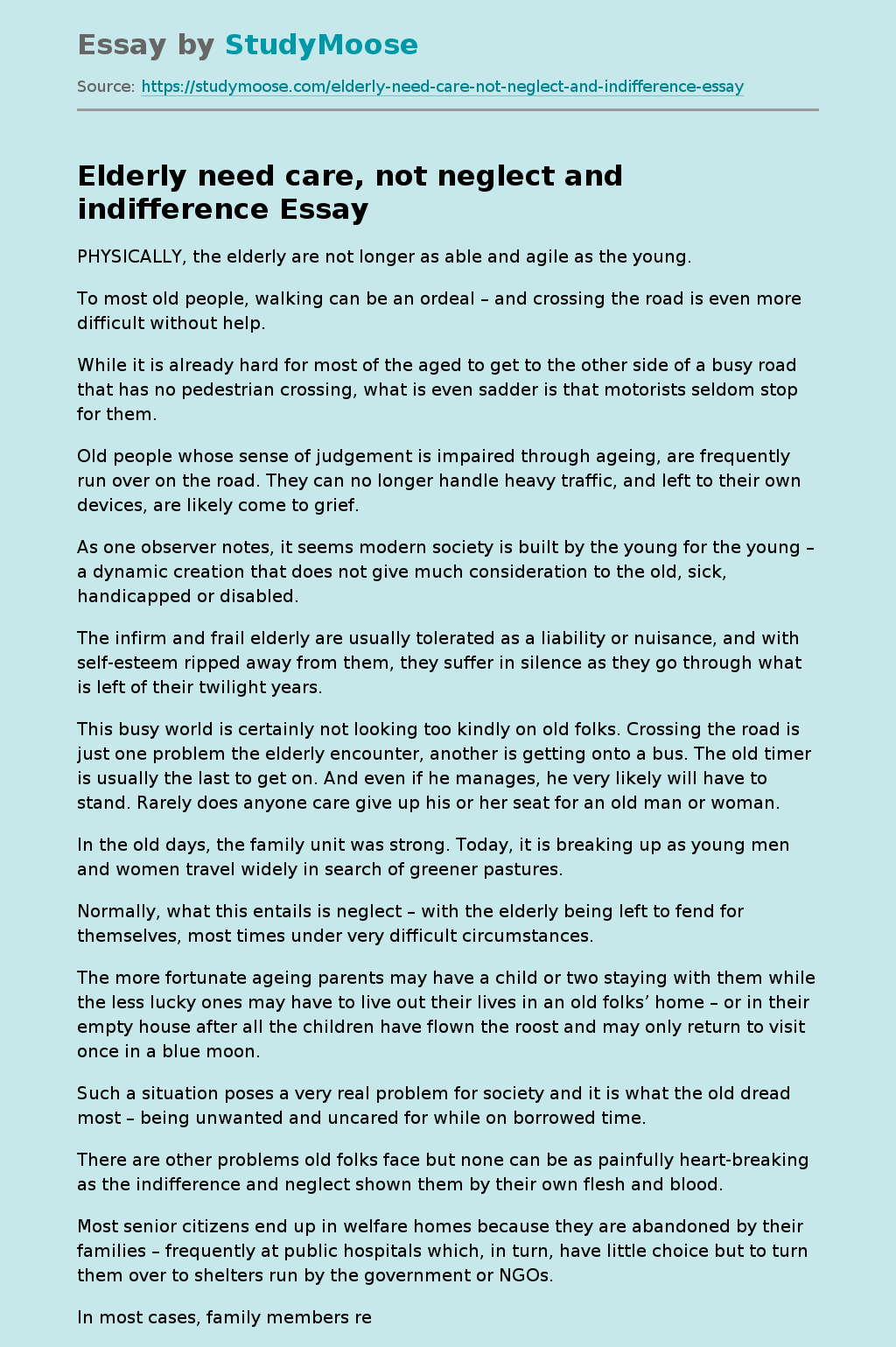