What Are the Causes and Consequences of Child Neglect?

Child neglect according to McCoy & Keen (2009) is the most common form of child maltreatment. However, neglect of children has frequently gone unreported and has not been publicized or acknowledged as a child abuse (Stone & NSPCC, 1998). To some extent, it is recognizable why the different forms of violence against children have got more attention compared to child neglect. Abuse to the children often leaves visible scars and bruises, whereas neglect signs tend to be less visible. But neglect effects can be detrimental very much especially to the early brain development of children than sexual or sexual abuse (Crosson-Tower, 2010).

Turn in your highest-quality paper
Get a qualified writer to help you with
“ What Are the Causes and Consequences of Child Neglect? ”
Get high-quality paper
NEW! AI matching with writer

The definition of neglect differs among different agencies, disciplines, countries and professional groups such as health care providers, court systems, and the child protective services. However, the definition of neglect shapes the responses since the objective of defining neglect is for child protection and to improve the children wellbeing, and not to blame the caregivers or the parents. The definitions help in the determination if a pattern of behavior or an incident qualifies as neglect, the safety of the child and its duration or seriousness.

Historically, it has been difficult to define neglect, and that has led to inconsistencies in research, practice and policies. With no consistent neglect definition, it is close to impossible to make comparisons of the research results. It is also this inconsistency that has led to variability in the manner in which cases of neglect are handled. The debate on neglect definition centers on the lack of consensus in addressing some of the questions highlighted by Scott et al (2014).

1. What are the associated minimum requirements with child caring?2. What inaction or action by a caregiver or parent constitutes neglectful behavior?3. Must the action or inaction of the caregiver or the parent be intentional?4. What constitutes “inability or failure to provide” adequate clothing, food, protection and shelter?5. What impact does the inaction or action have on the child’s well-being, safety and health?

6. Should “inability or failure” be included?

7. Is the inaction or action result of poverty instead of neglect?

In United Kingdom, Cawson & NSPCC (2000) defined neglect as a child abuse form which can cause damages that are life-long to the victims. Neglect is also the most common cause for subjecting children under child protection register or child protection plans in UK. A child is said to be neglected when the caregivers and the parents are unwilling or unable to satisfy the needs of the child (Stone & NSPCC, 1998). In the four nations of UK, the definitions of child neglect based on the guidance of the government are broadly similar. Cawson & NSPCC (2000) pointed out that according to Child protection guidance of England, child neglect us defined as the persistent failure to meet the basic psychological and physical needs of the child, likely to lead to the serious impairment of the health or development of the child. Similarly, Stone & NSPCC (1998) indicated that the Child Protection Committee (CPC) areas in Scotland use the formal neglect definition commonly used by the National Guidance for Child Protection in Scotland. There are many voluntary organizations for children in UK such as NSPCC, Action for Children, Barnados, National Children’s Bureau whose definition of child neglect align with the states they operate or their organizations definitions.

Furthermore, Howe (2005) asserted that what is regarded neglect varies based on the development level and age of the child. This makes it difficult to sketch out a set of behaviors that are always considered neglect. For instance, leaving a young child for an hour unattended is considered neglect, but a teenager child is not. McCoy & Keen (2009) pointed out another issue in the definition of neglect whereby most definitions states that omissions in child care my results in “major harm” or “harm risk” to the child. These terms by law are not often defined leaving the local agencies of child care to interpret them. This results to inconsistency in responding to the challenged families in meeting their children’s needs.

Scott et al (2014) defined Child maltreatment as “Failure to act or any recent act on the part of the caregiver or parent, which leads to serious emotional or physical harm, death, exploitation or sexual abuse, or failure to act or an act which presents an imminent risk of a very serious harm.” Under this definition, a child means a person whose age is below 18 years and is not a minor who is emancipated. In child sexual abuse cases, a child is an individual who has not attained 18 years, or any other age as specified by the state’s child protection law in which the child lives (Howe, 2005). McCoy & Keen (2009) indicated that the neglect instances are categorized as mild, moderate or severe.

I. Mild neglect- for instance, failure by a parent to tie a child by a safety belt in a car. It might need community-based intervention but not warrant CPS reportingII. Moderate neglect- occurs when moderate harm has occurred to a child, or the community interventions have failed. For instance, a child is inappropriately dressed consistently for weather.III. Severe neglect- it happens when long term or severe harm has been inflicted on the child. For instance, asthmatic child who has not gotten appropriate medication for a very long period, and is admitted t the hospital frequently. In severe neglect, the legal systems and the CPS should be involved.

Assessing the neglect severity along this continuum assist practitioners in assessing the weaknesses and the strengths of families and permits the possibility of provision of preventive services before the actual occurrence of neglect or neglect becoming severe. Cawson & NSPCC (2000) observed the existing controversy whether potential harm should be regarded as neglect. Despite the fact that there is difficulty in assessing potential harm as neglect, it can have physical as well as emotional consequences. For instance, the difficulty in creating and maintaining relationships at present or later in their life.

Neglect seriousness is determined by how much risk of harm or harm there is to the child and how chronic the neglect has been. Crosson-Tower (2010) defined chronicity as patterns of omissions or the same acts that recur or extend over time. Since some behaviors are only considered neglect if only they frequently occur, it is significant to examine the behavior history instead of focusing on a particular incident.

Despite the fact that definition of neglect can be hard or to detect compared to other child maltreatment forms, experts of child welfare have formed common neglect categories that include medical neglect, physical neglect, inadequate supervision, educational, emotional and environmental neglect, and newborn exposed or addicted to drugs.1. Physical neglect

This is the most widely known form of neglect and includes;

a) Abandonment-this is child desertion with prior arrangement for his or her supervision or reasonable care. A child is usually considered to be abandoned when he is not picked up to two daysb) Expulsion-this is blatant refusal of child custody, such as indefinite or permanent child expulsion from home, with arranging adequately by others for his or her care or refusal to take custody of a child returned runaway.

c) Shutting-this is when a child is left in others custody repeatedly for weeks or days, may be due to the parent’s or caregiver’s unwillingness to maintain custody

d) Nutritional neglect- this is when a child is hungry for long time periods repeatedly or is undernourished, which sometimes can be evidenced by child’s poor growth

e) Clothing neglect- this is when a child lacks clothing that are appropriate, such as lacking appropriate clothes and shoes that are warm in the winter

f) Others forms of physical neglect- these include reckless disregard of safety and welfare of the child and inadequate hygiene. For instance, leaving a child unattended in the car, or driving with the child while intoxicated (Scott et al, 2014).

a) Denial of health care- this is a failure to allow or provide care needed as recommended by a health care professional for impairment, medical condition, illness or physical injury.b) Delay in health care-this is failure to seek appropriate or timely medical care for a health problem that is serious that any person reasonable would have recognized as requiring professional medical attention (Howe, 2005).

a) Lack of appropriate supervision-this is not meeting the specified amount of time by law for child supervision. The time varies according to age, situation and development of a child. Accessibility by other adults, child maturity, frequency and duration of unsupervised time also are significant factors

b) Exposure to hazards- these includes safety hazards such as small objects, poisons, stairs, electrical wires and drug paraphernalia; smoking such as second hand smoking for asthmatic children or lung problems; weapons such as unlocked loaded guns kept in the house within children reach; unsanitary household conditions such as animal or human feces, rotting food, lack of clean water and insect infestation

c) Inappropriate caregivers-this when a child is left in the care of someone who should not be trusted to give child care or is unable, for example, known child abusers, young children, or substance abusers

d) Other inadequate supervision forms- leaving an appropriate caregiver a child without the consent or proper planning, leaving the child with an individual who is not supervising the child adequately, permitting a child to engage in harmful, illegal and risky behaviors (McCoy & Keen, 2009).

Most of the characteristics discussed stem from environmental neglect characterized by lack of neighborhood or environmental safety, resources and opportunities. Dangerous neighborhoods have harmful impacts on mental health, development and maltreatment of children (Scott et al, 2014).

This is the most difficult to assess and has more log lasting and severe consequences and includes; Inadequate affection or nurturing-the marked, persistent inattention to the requirements of the child for attention, emotional support and affection; Extreme or chronic spouse abuse, permitted drug abuse, and other maladaptive behaviors permitted such as assault, and chronic delinquency (Crosson-Tower, 2010).

a) Chronic, permitted truancy-this is permitted habitual school absenteeism, and if the guardian or parent is informed, they do not intervene or even attempt

b) Failure to enroll-this is failing to register, to home school, to enroll a child to school at the mandatory age, and even causing a child to miss from school for at least a month without valid reasonsc) Inattention to needs of special education-failing to obtain or refusing to allow remedial education services that are recommended, or neglecting to follow through or obtain treatment for a diagnosed child with a learning disorder without reasonable cause (Howe, 2005).

7. Newborns exposed or addicted to drugs

These are newborns of women who used alcohol or abused drugs during their pregnancy, and this can put the children at risk of physical and mental disabilities. The identified newborn infants as affected by withdrawal symptoms or illegal substance abuse should be given safe care (McCoy & Keen, 2009).

Cawson, P., & National Society for the Prevention of Cruelty to Children. (2000). Child maltreatment in the United Kingdom: A study of the prevalence of child abuse and neglect. London: NSPCC.

What Are the Causes and Consequences of Child Neglect?. (2015, Sep 01). Retrieved from https://studymoose.com/what-are-the-causes-and-consequences-of-child-neglect-essay 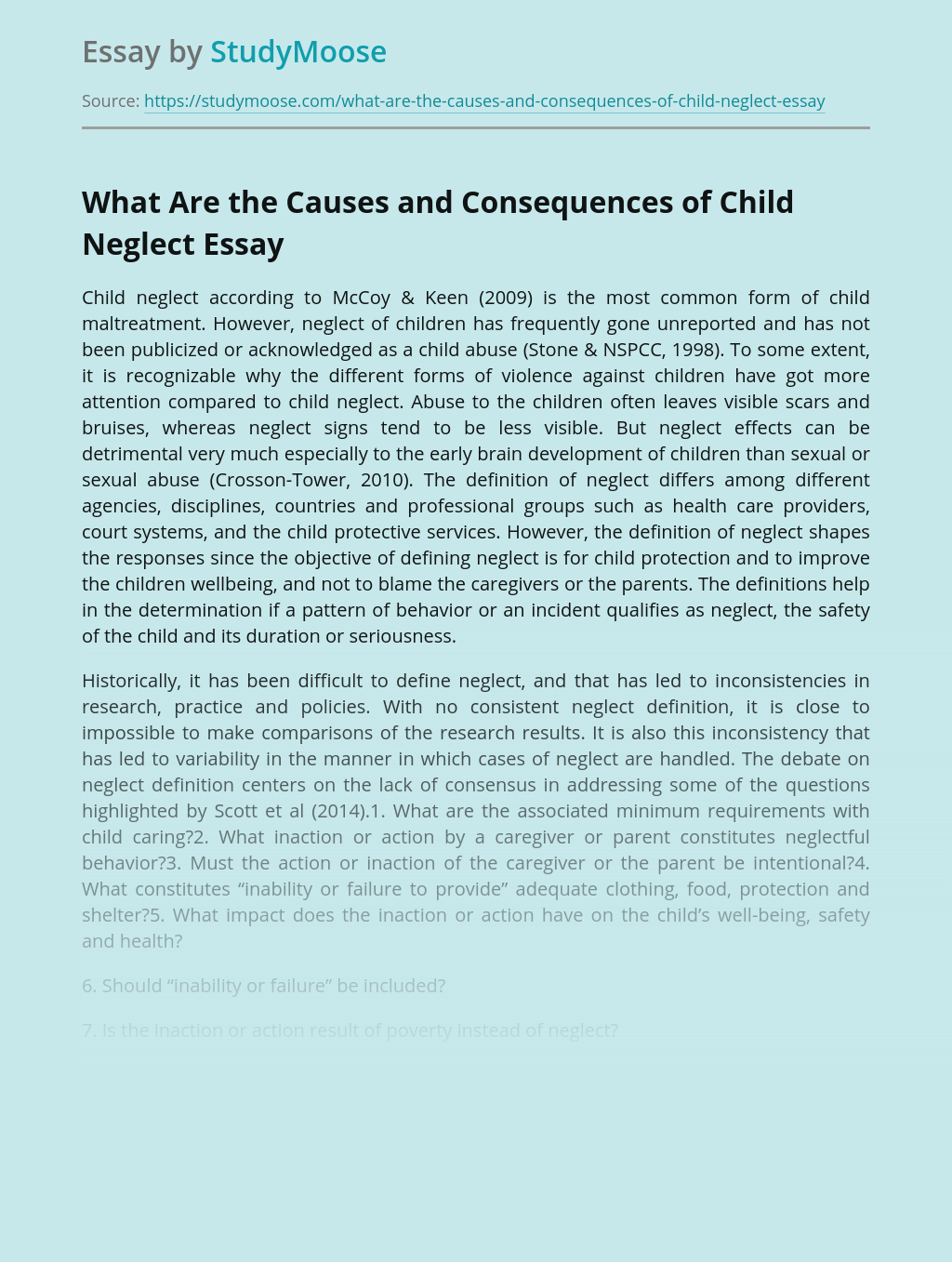 Turn in your highest-quality paper
Get a qualified writer to help you with
“ What Are the Causes and Consequences of Child Neglect? ”
Get high-quality paper
Helping students since 2015
Stay Safe, Stay Original