For the Period Before 1750, Analyze the Ways in Which Britain's Policy of Salutary Neglect Influenced the Devlopment of American Society

For the Period Before 1750, Analyze the Ways in Which Britain’s Policy of Salutary Neglect Influenced the Devlopment of American Society as Illustrated in the Following: Legislative Assemblies, Commerce, Religion

As soon as the Americas were discovered, tens of thousands of people wanted to migrate across the sea. The fastest the voyage could be made was approximately one or two months. Communication between the colonies and England was extremely difficult. The regulation of religion was basically impossible. Without the government to intervene, colonists were free to grow whatever they wished and do what they wished with their money.

Don't use plagiarized sources. Get your custom essay on
“ For the Period Before 1750, Analyze the Ways in Which Britain’s Policy of Salutary Neglect Influenced the Devlopment of American Society ”
Get custom paper
NEW! smart matching with writer

Also, it is exceedingly difficult to govern a colony from thousands of miles away, so the colonies needed to develop their own system of governing. Britain at this pointed adopted a policy of salutary neglect. Salutary neglect allowed the North American society to develop and change into something completely different from what it originally was in England.

The land in the new world was found to be very good for farming.

All of this new farmland was found to be viable and a great source for crops that were not able to be grown in England, such as tobacco and sugar cane. North American farmers were supposed to plant one acre of corn for every acre of tobacco they planted, but since it was such a cash crop and England was so far away, there was no way to enforce the rule. So much tobacco was made in fact, that the value of it dropped to the point where it was no longer profitable to grow.

Farmers at this time did not fully understand supply and demand at this point so they just kept growing it. In the West Indies they would grow sugar cane. This was a valuable crop that sold for high prices in England.

Religion in the colonies was freer and more persecution free than ever. While religious persecution still existed, it was much milder and there were many places one could go to escape persecution. The Church of England had no effective form of power in the colonies, so they could not enforce the church upon the colonists in the area. Meanwhile, areas such as Rhode Island had extremely tolerant policies of religion and even allowed those who did not believe in the divinity of Jesus to live there without fear. Even atheists and Jews could escape persecution.

With the monarchy so far overseas, the colonies did have to develop their own self-governance. This was prominently seen in the Virginia colony with the House of Burgesses. The House of Burgesses was the first example of self-governing in the colonies. It served as a template for which a colonial government should be created. The House of Burgesses was made up of the Royal Governor and his appointed council of leading plantation owners. The HOB was able to legislate and create laws for the Virginia colony and was a viable replacement for the English government well into the seventeenth century. Another example of government in the colonies can be seen aboard the Mayflower. The Mayflower landed very far from their intended destination so they had no form of regulation or anything to guide themselves by. They decided upon and wrote the Mayflower Compact. The Mayflower Compact was an agreement between the 102 settlers on the Mayflower to form a crude government such that they could function properly until a proper government could be established.

Salutary Neglect means the beneficial ignorance of something. When England practiced salutary neglect towards the colonies, it allowed American society to flourish and it provided an easy ruling for the English while still technically controlling the colonies.

For the Period Before 1750, Analyze the Ways in Which Britain's Policy of Salutary Neglect Influenced the Devlopment of American Society. (2016, Mar 18). Retrieved from https://studymoose.com/for-the-period-before-1750-analyze-the-ways-in-which-britains-policy-of-salutary-neglect-influenced-the-devlopment-of-american-society-essay 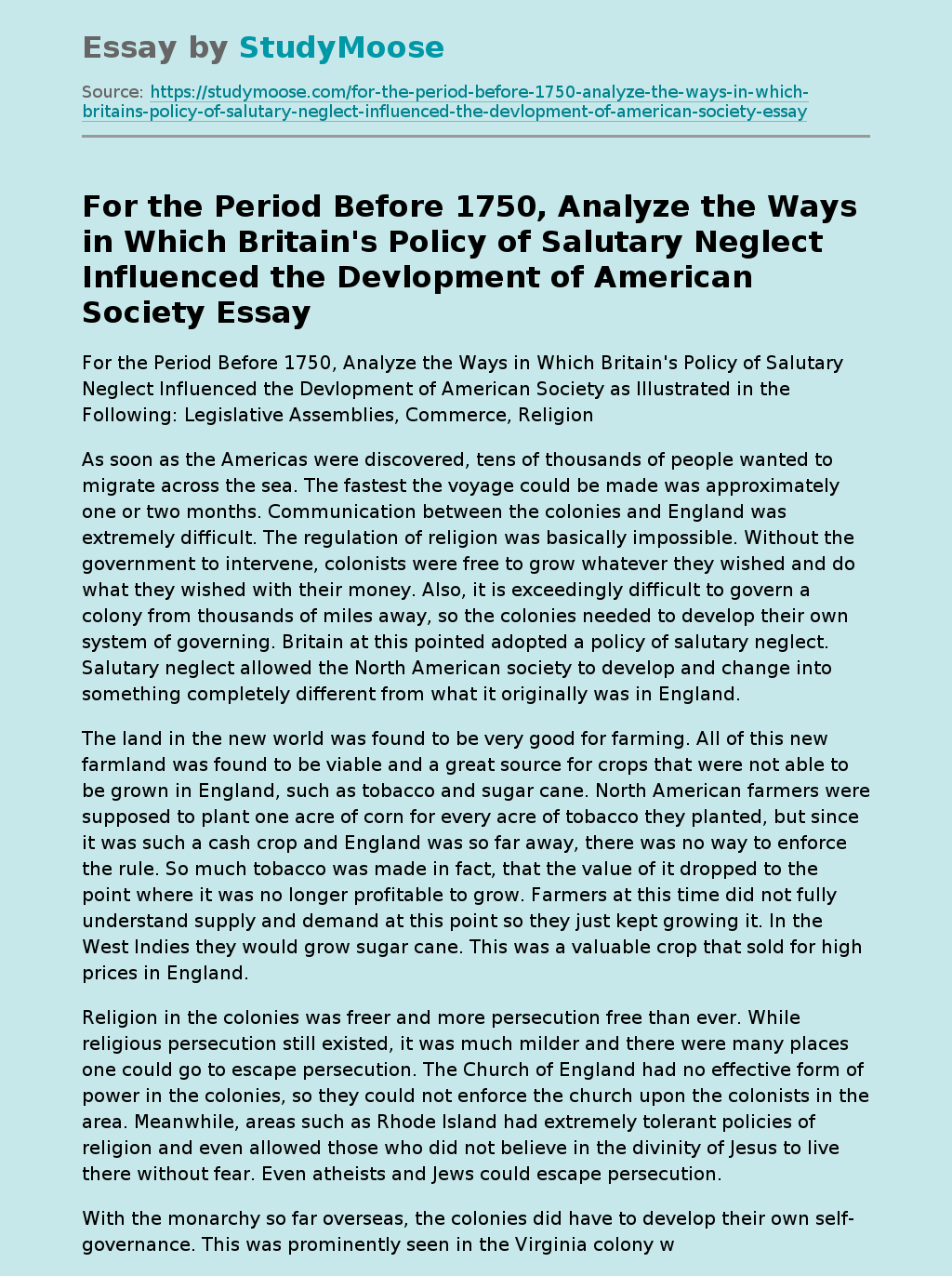