For the period before 1750, analyze the way in which the British policy of salutary neglect influenced the development of American society as illustrated in legislature assemblies, commerce and religion.

The policy of salutary neglect influenced the development of American society. It gave the colonies a chance to govern themselves and to develop separately from England. It let them make their own laws that would benefit the people in the colonies. Because of this there was religious freedom. It unified the colonies and gave them a sense of nationalism.

Don't use plagiarized sources. Get your custom essay on
“ Salutary Neglect Essay ”
Get custom paper
NEW! smart matching with writer

Even though England believed in a system of mercantilism, Sir Robert Walpole espoused a view of “salutary neglect?. In this system the British had very little interference in the international affairs of the American colonies. Walpole believed that this enhanced freedom for the colonists would stimulate commerce. The policy had allowed the colonists to develop their own political institutions to the extent of making their own legislative assemblies as local equivalents of the Westminster parliament to be the main protector of their rights to life, liberty, and property.

In Britain, Westminster parliament had greatly increased its own role in the political life of the nation and the political elite there started to believe more in the constitutional doctrine that ultimately sovereignty lay with the king-in-parliament.

The people in Britain believed that the parliament had control over the American colonies and, so long as this authority was restricted to the regulation of Atlantic trade and the control of the colonies external relations, the colonists did not take it as a violation of their rights.

The American colonists did not realize that this could be a threat to their own legislative institutions. In the early eighteenth century, both the colonies and Britain were developing distinctive ideas of the power and authority of their own legislatures without clearly defining the boundaries of each others power over what happens in the colonies. (Dickinson, pp. 6)

From the earliest days of English colonial development in the new world, salutary neglect and mercantilism have flawed the relationship between colonists and the mother country. The system of salutary neglect allowed the colonies to develop the spirit of independence that was the foundation of the revolutionary movement. After they get a taste of independence there is no going back. The attempts by the British to make the Americans comply with the British rules only ignited the American flame for revolution.

When England attempted to end salutary neglect and reinstate a tightly controlled mercantilist relationship, the colonists rebelled. Under salutary neglect England’s was too busy with internal trouble brought by the Civil War and Glorious Revolution as well as foreign wars with the Dutch and French so they left the colonies to fend for themselves throughout the seventeenth and eighteenth centuries. On their own they created governments, economic institutions, and social civilization based on Britain.

They created participatory government with the House of Burgesses, an independent trade economy in Massachusetts, and provided for religious freedom in Pennsylvania. They assumed these institutions were guaranteed them as English citizens.

England’s mercantilists did not agree with this assumption. They believed the colonies existed for the sole purpose of supporting the mother country, which is the main idea of mercantilism. Their citizens thus were to be subservient. Because of the Navigation Acts of 1690?s which limited the goods the colonists could trade, made the American colonists turn to the black market for goods they could no longer get or that were too expensive. The French and Indian War which the English hoped to fight with the help of colonial taxes and militia inspired the Americans to declare their right to grievance before supply, a right they assumed was theirs as citizens of a representative government. All of these misunderstanding about the colonist?s rights would lead them to war.

Trade flourished between America, Europe, and the West Indies, as well as between the colonies themselves. A triangular trade developed, in which Massachusetts merchants brought in sugar and molasses from the West Indies, converted it into rum, sent the rum to Africa in exchange for slaves, and sold the slaves to West Indian sugar plantations. In addition to the prosperity from sea commerce, the colony developed manufacturing industries, such as ironworks, brickyards, stone quarries, leather tanneries, and distilleries.

Town life spread into central and western Massachusetts. Boston grew steadily and by the 1770s was one of America?s few large cities. Differences between the colonies gradually disappeared as common forms of local government and common experiences among the colonists brought people together. Moreover, the works of Isaac Newton and John Locke were becoming ever more popular in England as well as America, arousing a new spirit of rational inquiry into the laws of nature and the nature of man.

The British Tory war party initiated a new war against France by mid-century. In America it became known as the French and Indian War and it was, Rothbard points out, a deliberate try for more land in North America. The British emerged victorious and the Tories swept the Whigs from office. (www.lewrockwell.com/klassen/klassen26.html )

The policy of salutary neglect united the colonies. It helped them to build a unified society in which they had their own assemblies and law system. It encouraged religious freedom and commerce flourished under it. The repeal of the policy caused much anger in the colonies. This pulled the colonies even closer together and it united them under one cause, which would in the long run give them an independent nation.

4.Internet Sites (listed in the footnotes) 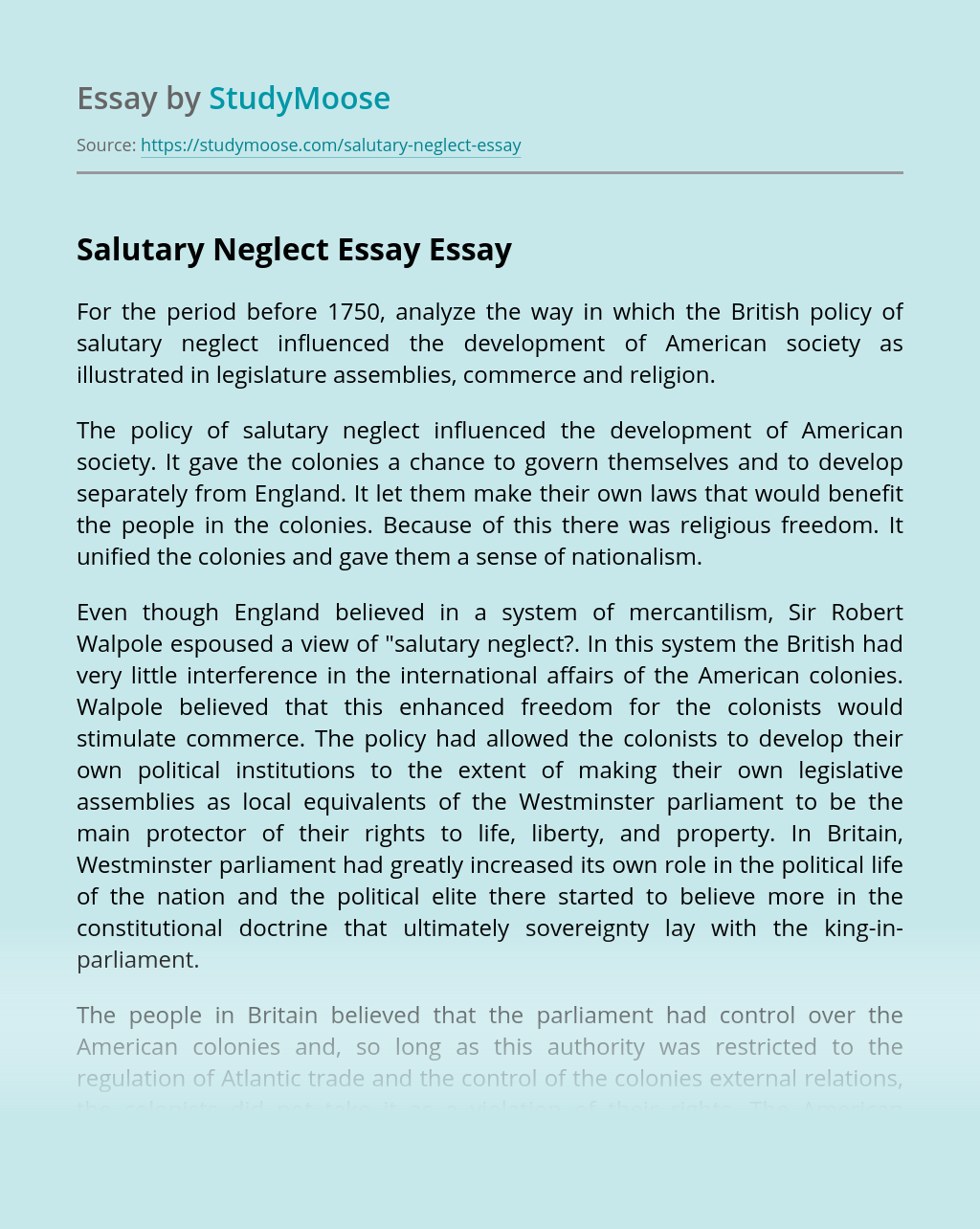