British oppression: the cause of the American Revolution?

The American Revolution was costly and bloody war that granted the Americans the independence for which they fought. This 8-year-long revolutionary war from 1775 to 1783 is considered one of the greatest revolutions of all time in that the Americans had defeated the most powerful nation in the world at the time, Great Britain. The American Revolution is a critical event in the history of the United States and has been explored and evaluated by numerous historians of the 20th century. Whether or not the revolution is justifiable by the American colonists is a long, debatable subject.

Turn in your highest-quality paper
Get a qualified writer to help you with
“ British oppression: the cause of the American Revolution? ”
Get high-quality paper
NEW! AI matching with writer

Some historians assume that the American Revolution is a result of colonial selfishness and ideology whereas some argue that “only oppression … can justify war” (McLaughlin C. Andrew). All in all, it can be conclusively demonstrated that British oppression towards the colonists is largely responsible for the American Revolution. In fact, particularly after the French and Indian war, England was beginning to rule tyrannically and severely oppress the colonists especially in the economic field.

Before interpreting how Britain oppressed the colonists after the Seven Year’s War, it is important to know that even before this war Britain was already showing oppression under the practice of mercantilism. Hacker comments that “beginning in 1660 England gave new strength and direction to its empire. It began exerting stronger controls over the economic activities of the colonies” (DiBacco et al. 59) These stern policies were known as the Navigation Acts. The first Navigation Act of 1660 ordered that all colonial trade had to be in British ships or colonial ships with British captains.

This act also ordered that goods such as indigo, sugar, and tobacco were to be sold only to England or another colony. Furthermore, “The law was directed against the Dutch maritime trade, which was very great at that time” (Elson Henry).

The second Navigation Act of 1663 assured that all European imports to the colonies were required to pass through Britain first. There, government collected both import and export duties on the same goods. Because this law hurt the colonies, it was later ignored. However, as Elson states: “had this law been strictly enforced, the effect on the colonies that produced the “enumerated” goods would have been disastrous.” (Elson Henry) The last Navigation Act that was ordinanced in 1673 sent British tax officials who collected duties on colonial goods destined to England. From these Navigation Acts by Britain it becomes evident that England started oppressing the colonists even before the French and Indian war. I was suggested by Elson that the Navigation Acts were “unfortunate for British interests; it served to alienate the colonists, little by little, and prepared them for the final break with the mother land.(Elson Henry).

By 1760, England began tightening the screws on the colonies especially after the French and Indian War. Economic and political crisis started to be seen. Additionally, Britain was in debt and did not want to risk another war. Therefore, to keep piece with the Indians Britain issued the Proclamation if 1763 which declared that all land west of the Appalachians was to the Indians and off-limits to the American colonists. This proclamation infuriated the colonists who wanted to seek westward, and provoked resentment which would later lead to the American Revolution (DiBacco et al. 73). This protest to the Proclamation could be considered legitimate because as Hacker states:

Stringency and bankruptcy everywhere confronted the merchants and big farmers; seamen and laborers were thrown out of work, small tradesmen were compelled to close their shops and small farmers were faced by ruin because of their expanded acreage, a diminished market and heavy fixed charges made particularly onerous as a result of currency contraction. Into the bargain, escape into the frontier zones–always the last refuge of the dispossessed–was shut off as a result of the Proclamation of 1763. (Hacker 93)

The Seven Year’s War caused more problems to the British which had to be solved . After the war 10,000 English soldiers remained to protect the frontier. Because the Parliament needed to raise funds for such expenses, the Stamp Act of 1765 was issued. It required that every sheet of legal document had to have a stamp on it showing that tax had been paid. Every copy of a liquor license, a land deed, a will, a newspaper, even playing cards were taxed. Moreover, those caught disobeying the law were to be tried in courts where there was no trial by jury. This act by the British was an attempt to cripple the colonists with taxes. The Stamp Act:

Meant that they had to go to a special stamp tax office to purchase the stamped paper. Not only that, the tax was to be paid in silver coin–a scarce commodity in the colonies. (DiBacco et al. 83)

Although this act was repealed in 1766, another oppressing act was passed, the Declaratory Act. The latter asserts Britain the right to rule and tax colonies. Following the Declaratory act came the Townshend Acts of 1767, where the King and Parliament expected more revenues from the colonies. The Townshend Acts placed high duties which were to be paid in gold or silver on lead, paper, glass, paint and tea. (Dibacco et al. 83). Such oppressive acts by the British Parliament meant to restrict colonial economy. In History of the United States, Salma Hale mentions that “…these restrictions, while they increased her revenues and wealth, greatly diminished the profits of the trade of the colonies, and sensibly impeded their internal prosperity.”

There were several tyrannical events and acts that took place in Boston. The city was a sight of coercion and ruthless conflict between the British and the colonists. For example, on March 5th, 1770 tensions erupted when British soldiers fired at an angry street mob killing 5 people. This incident became known as the Boston Massacre. Only a month after this incident British Parliament repealed the Townshend duties but left the Tea Act of 1775 to symbolize Britain’s control and power over the colonists. The Tea Act gave the East India Company a monopoly on trade. Moreover, the tea arrived in the company’s own ships and be sold by its own agents (DiBacco et al. 85).Colonial merchants and shippers dismayed and thought that if Parliament could establish a monopoly on tea, then they could establish monopolies on other goods. According to Louis Hacker, the East India company:

Was given permission to ship in its own vessels and dispose of, through its own merchandising agencies, a surplus stock of 17 million pounds of tea in American: and, in this way, drive out of business those Americans who carried, imported and sold in retail channels British tea. (Hacker 89)

Lastly, one of the most and domineering and oppressive acts that Britain had issued on the colonists were the Coercive Acts, or the Intolerable Acts as the colonists referred to it. After what had happened at the Boston Tea Party, Britain was enraged. Not only did England close the Boston Port until all tea wasted at the Boston Tea Party was paid back but even representative government was severely restricted in Massachusetts. The governor had the power to appoint the council, all judges and all sheriffs. Also, committees of correspondence were forbidden, and only. Under the governor’s permission were town meetings allowed to be held. Yet another act declared that soldiers were to be quartered in abandoned buildings or taverns in colonies whenever it was necessary. It was an oppressive act because it interfered with the colonists’ lives: food, clothing, and shelter had to be provided for the British Army. This act is commonly known as the Quartering Act.

To enforce these laws, Massachusetts became under military rule. Spontaneously, another act which offended the colonists known as the Quebec Act was issued in 1774. It not only guaranteed “French Canadians the right to practice Roman Catholicism” but it also “gave Quebec control over much of what is now Quebec, Ontario, and the Midwestern United States.” (The Quebec Act). The colonists were not willing to tolerate Catholicism and felt offended. The American land-hungry settlers became enraged after Quebec acquire Indian Territory which they believed to be theirs by right. Such oppressive acts by the British may have contributed to the outbreak of the American Revolution. In one historian’s interpretation of the cause of the American Revolution it was suggested that:

The direct taxing of domestic goods and services under the Stamp Act, and taxing of imports under the Townshend Acts, the tax on the tea, the Coercive Acts which followed resistance to British authority by the people of Boston, and the exclusion of colonial representatives from the Parliament that enacted such measures–these were without doubt grievances which stirred the American generation of the 1770s. (McClellan 113)

In summary, the American revolution which was a gruesome and costly war to both Britain and the Americans, it had nevertheless granted the independence the Americans battled for. Due to the fact that the American Revolution is an excessively complex topic, there are various interpretations on whether it could be justified. Undoubtedly , it becomes clear that only British oppression on the colonists could be the cause of the revolutionary war. Not only were the British oppressing the colonists before the Seven Year’s War with acts such as the Navigation Acts, but by 1760 England was starting to rule ruthlessly and oppress the colonies especially in the economic aspect. Lecky, one of the ablest historians mentions in “History of England that: “The deliberate selfishness of the English commercial legislation was digging a chasm between the mother country and the colonists.”

British oppression: the cause of the American Revolution?. (2016, Jun 26). Retrieved from https://studymoose.com/british-oppression-the-cause-of-the-american-revolution-essay 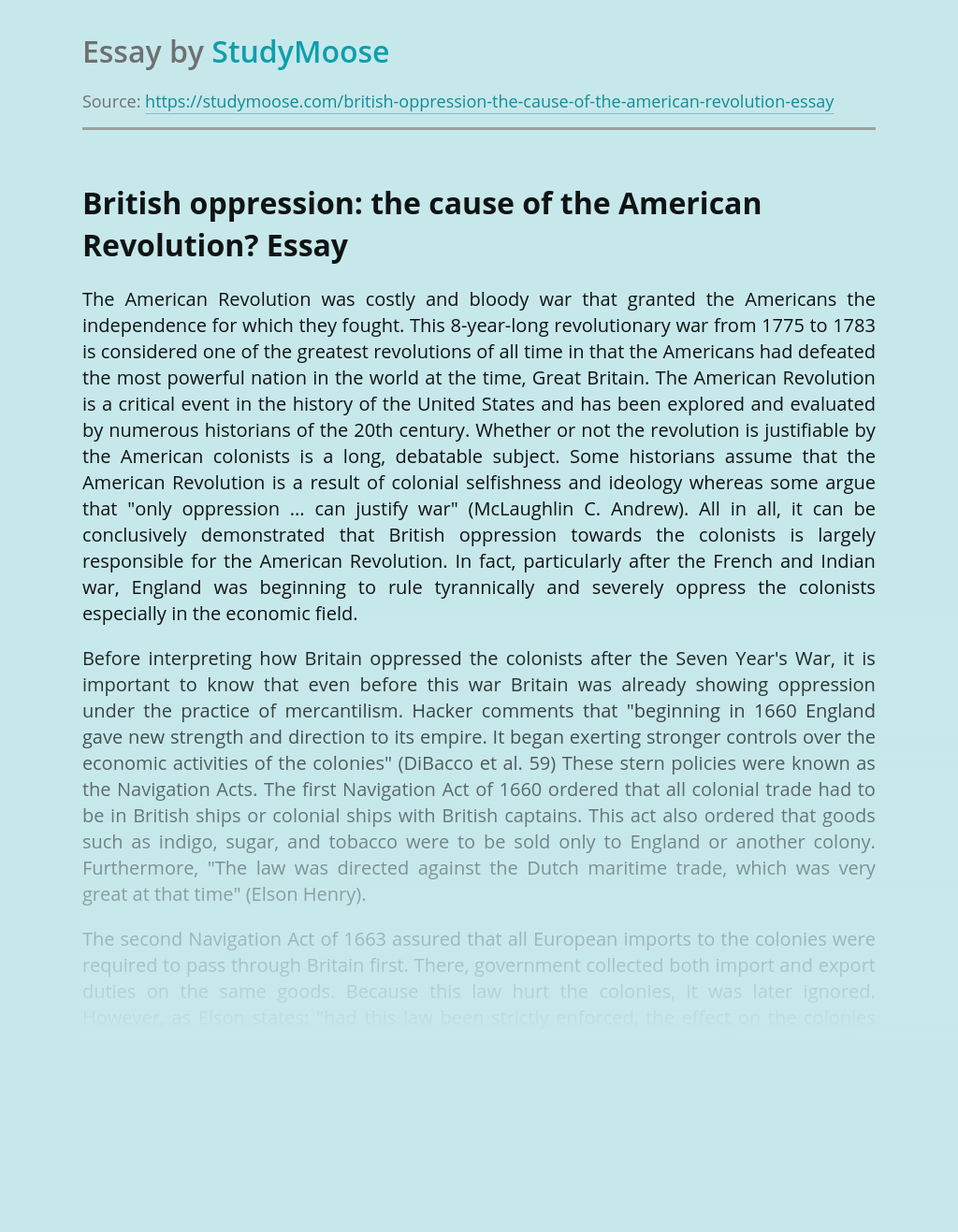 Turn in your highest-quality paper
Get a qualified writer to help you with
“ British oppression: the cause of the American Revolution? ”
Get high-quality paper
Helping students since 2015
Stay Safe, Stay Original