Are we humans the product of nature or nurture?

With nurturing, people tend to observe others actions and behaviour, and try to be like others.

Turn in your highest-quality paper
Get a qualified writer to help you with
“ Are we humans the product of nature or nurture? ”
Get high-quality paper
NEW! AI matching with writer

As a result, the human behaviour is the result of experience and imitating. The social learning theory suggests that we learn through imitation and observation. It also suggests that people learn within the environment and get approval from the public by learning through an influential model. Bandura, a known psychologist found that according to this theory, a model can be the main cause for learning new actions. However, when there is a role model that illustrates bad behaviour, that behaviour could be imitated by young children.

A few psychologists criticised Bandura’s theories- where children behaved more aggressively after observing violent acts from their family members. This meant that children, who witness their parent’s aggressive behaviour, have a higher risk of being abusive later on in their life. This theory is also questionable as there could be other factors, like genetics, which affect the behaviour.

Our behaviour is more influenced by the genes we inherit than the environment we are brought up in.

When socialisation does affect our identities, genetic and hormonal factors have a greater impact. For instance, there was a twin study, where the research twins had been separated at birth and adopted by different families. They both had met a wife with the same name, and their dogs had the same name, with many other striking similarities. They met 39 years after being separated.

This proves that intelligence and talents are more likely genetic than environmental. Some scientists say, when contrasts are made between genetically connected twins, it is simple and easy to take account on the similarities and then overlook the behaviours that are
distinct.

For a person’s physical features; the appearance, genes play a bigger role. Yet, in the making of one’s individuality and behaviour, it can be nothing more than the environment they are raised in and how they are nurtured. People are sometimes taught into a certain style and norms. Evidently, in religions, whether you’re Christian or Muslim, you are raised up with the customs that follow the religion.

So its indoctrinated to you when growing up. Some people may say, no two people have the exact same genes. So everyone is genetically one of a kind. Also, people may have been raised in similar environments, so they are nearly the same nurture-wise. Then, nature could have a bigger impact.

The actions of someone’s life can occur without being learned by the individual. It is believed that inherent or innate behaviour comes from the genetic structure of an individual. For instance, alcoholism, bipolar disorder or depression are all psychological disorders that can be passed heritably from a parent to the child. Studies show that children who have alcoholic parents with similar genetics are 4 times more likely to become alcoholic than children with parents are not alcoholic.

The question still arises, born or raised an addict? Some would disagree with the fact that it is all in the genetics. Maybe the people around you are the bigger influence in you wanting to take a swig of the booze. And that’s where the social factors come in to play. Likewise, the media could portray the fact that over drinking can be acceptable. With everyone having their own judgments, there is no exact answer to this.

In the end, not everyone may come into agreement with this debate. The nature and nurture of an individual can fluctuate to a great extent. Some things are hard to decide if they are inherited or learned by the surroundings. I believe that genes can bring about certain behaviours in an individual. Moreover, that the environment and upbringing can help make the behaviour precede to something more than just behaviour, possibly a talent. For example, a boy may be good at tennis.

He will need the proper surroundings where he can develop his skills to play more tennis. Nature and nurture work hand in hand. Nature needs nurture to convey the behaviour of an individual. Thus, the known terms of this distinguished debate should not be ‘nature versus nurture’ but ‘nature and nurture’.

Are we humans the product of nature or nurture?. (2016, Apr 22). Retrieved from https://studymoose.com/are-we-humans-the-product-of-nature-or-nurture-essay 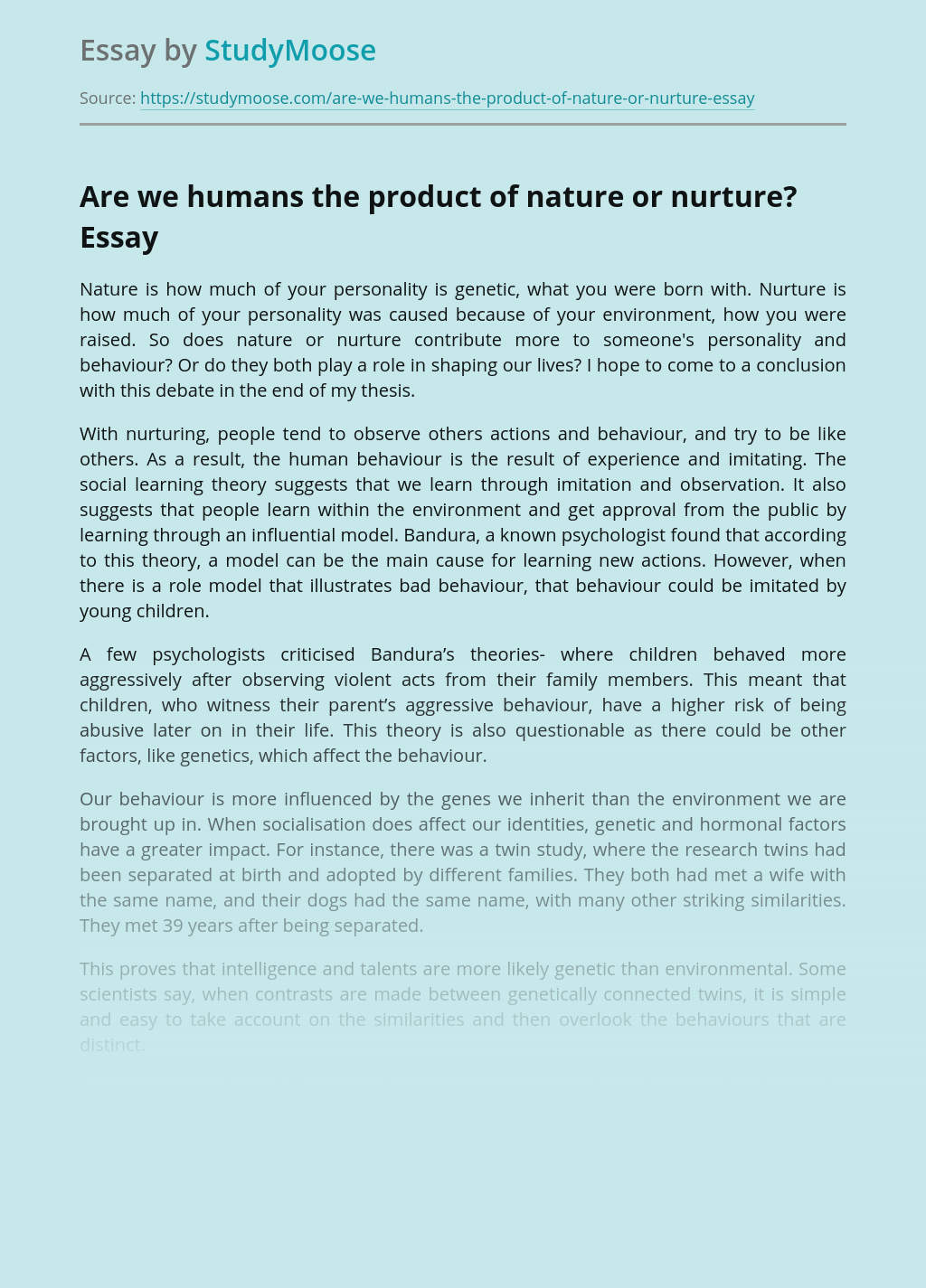 Turn in your highest-quality paper
Get a qualified writer to help you with
“ Are we humans the product of nature or nurture? ”
Get high-quality paper
Helping students since 2015
Stay Safe, Stay Original