Poets often use nature imagery to comment on the relationship between humans and the natural environment surrounding them. Traditionally, this relationship is portrayed in a positive manner as it places emphasis on the concept that nature is representative of beauty; consequently, embracing this representation will enlighten the human experience. The facets of that relationship are represented within Dylan Thomas’ “Fern Hill” and Robert Frost’s “Birches”. Both poets invoke an image of nature that is picturesque, serene and innocent in order to convey a message that one can have a fulfilling life if they focus on the beauty that exists within the primary world.

Don't use plagiarized sources. Get your custom essay on
“ Poets often use nature imagery to comment on the relationship between humans and the natural environment surrounding them ”
Get custom paper
NEW! smart matching with writer

Conversely, Coleridge’s “Dejection: An Ode” contains a different interpretation of what one’s relationship with nature should involve. The speaker feels that a simple appreciation of beauty is insufficient; one must identify with that beauty through the soul in order to be enlightened. Despite the fact that “Fern Hill” and “Birches” initially appear to express satisfaction about the value of superficial human experiences, when analyzed in conjunction with “Dejection: An Ode”, the meanings of these two poems are altered.

Frost’s “Birches”, Thomas’ “Fern Hill” and Coleridge’s “Dejection: An Ode” all convey different levels of dejection upon initial examination; however, when contrasting the expressions of the speaker and the imagery patterns of the poem, these levels of dejection become increasingly ambiguous.

The relationship between the speaker and the natural environment is essential in recognizing the levels of dejection that exist in the three poems on a superficial level.

In “Dejection: An Ode”, the speaker, who can be identified with Coleridge himself, exhibits sorrow in his inability to find inspiration in the natural beauty that surrounds him. For this poet, finding solace in the natural world on a superficial level is insufficient; one must have an emotional connection to the beauty of nature.

In his past experiences the speaker could appreciate this beauty in a superior way as it, “sent [his] soul abroad” (Coleridge 183); however, in his current state he can only “see, not feel, how beautiful [nature is]” (184). As a poet who derives his inspiration from the surrounding world, the fact that he cannot connect with the sublime beauty of nature is problematic for him; thus, it causes his unhappiness. Coleridge’s poem represents the highest level of dejection because the natural world becomes meaningless to him without the transcendental inspiration he was once able to obtain by examining it.

Thomas’ poem represents an entirely different level of dejection than Coleridge’s because it is about the importance of appreciating the simple beauty of nature as opposed to attempting to develop a meaningful connection with it. When examining the speaker’s views of the surrounding environment, it becomes difficult to find any level of dejection in the poem. Thomas’ speaker describes how:

I ran my heedless ways,

My wishes raced through the house high hay

And nothing I cared, at my sky blue trades, that time allows

In all his tuneful turning so few and such morning songs

Before the children green and golden

Unlike for Coleridge, the speaker in “Fern Hill” is not preoccupied with his future or what he needs to accomplish before death; he simply desires to live his life by appreciating the beauty of his world around him while he is allowed to do so by time. “Fern Hill” does not appear to be a poem that incorporates elements of dejection; however, when one examines the images Thomas chooses to incorporate into his work, these elements become more apparent.

“Birches” is similar to “Fern Hill” in the sense that it does not initially read as being depressing. It appears to be the speaker’s fond reflection on the innocence of childhood. Frost incorporates a description of a young boy swaying the trees into the poem:

He always kept his poise.

To the top branches, climbing carefully

With the same pains you use to fill a cup

Up to the brim, and even above the brim.

Then he flung outwared, feet first, with a swish,

Kicking his way down through the air to the ground. (Frost 411)

The beauty of nature in “Birches” is associated youth; thus, the speaker reflects on a time in his past when he was once “a swinger of birches” (411). The overall purpose of the poem seems to be advocating the importance of savoring one’s youth as well as cautioning against the danger of letting go of one’s innocence too fast.

All three poems are different in terms of dejection when examined on a superficial level as well as when taking into account the views expressed by the speakers of the poems. “Dejection: An Ode” appears to be the most melancholic as it deals with an individual’s loss of self worth while “Fern Hill” and “Birches” present a more positive account of man’s relationship with nature. However, all these interpretations are destabilized when one considers the dominant nature imagery present in each of the texts.

Nature imagery plays a significant role in developing the poet’s opinions of the natural world, as well as in discovering the ambiguity of the dejection within each of the poems. The imagery and setting of the poem play key roles in expressing the poet’s views as opposed to the feelings of the speaker. Despite the fact that Coleridge clearly addresses the reasons for his dejection, it becomes increasingly difficult for the reader to accept that he has lost his connection to nature when one examines his description of the world that surrounds him. He describes the sky as containing:

those thin clouds above, in flakes and bars,

That give away their motion to the stars;

Those stars, that glide behind them or between,

Yon crescent moon, as fixed as if it grew

In its own cloudless, starless lake of blue. (Coleridge 185)

This ability to describe nature in elaborate detail leads the reader to assume that Coleridge may not be as uninspired as his speaker conveys. The description of the stars can be seen as a metaphor for Coleridge’s poetic talent; it may not always be bright and obvious, but it always lies within him waiting to be awakened. This fact is further emphasized through the ironic fact that Coleridge’s poem is about struggling to create magnificence in his writing, yet it is considered to be one of his greatest poems. The intricate beauty of this poem undermines the dejected attitude of the speaker.

“Fern Hill” also has its initial appearance destabilized by the imagery Thomas uses. Unlike “Dejection: An Ode”, the depressing aspects of the poem are enhanced as opposed to removed. One of the most abundant images in Thomas’ work is the constant presence of the sun within each stanza. He describes it as “the sun that is only young once” (Thomas 214) and discusses how it rises day after day; therefore, the description of the sun is representative of how time is constantly passing. This subtle integration of time through the sun imagery is important because it emphasizes the fact that time is always moving and one cannot prevent it from doing so. Thomas’ poem is as much about the inevitability of death as it is about the beauty of nature.

A majority of the images that Thomas’ incorporates into to his poem deal with the passage of time; time is personified in the poem to emphasize the control it has over humans. At the end of the poem the speaker refers to how “time held [him] green and dying/ Though [he] sang in [his] chains like the sea” (Thomas 633). The imagery in the poem suggests that life is a movement from birth to an eventual death that cannot be avoided. Thomas suggests that one should have an appreciation of nature because as time passes, one will eventually be left with nothing.

Like Thomas’ poem and unlike “Dejection: An Ode”, “Birches” also becomes more negative when the nature imagery is taken into account. The dominant image in this poem is the presence of the birch trees that are referenced countless times within the text. The symbol of the birch leaning over is featured heavily within this work:

When I see birches bend to left and right

Across the line of straighter darker trees,

I like to think some boy’s been swinging them.

But swinging doesn’t bend them down to stay

The birches are representative of the childhood innocence that is conveyed by the speaker. Frost’s trees are white, a colour that is traditionally associated with purity and youth and they also serve as a metaphor for the aging process. Frost describes how, over time, the birches begin to droop over and touch the ground; this image can be related to Coleridge and how eventually an individual loses contact with the nature that surrounds them. Children are often more imaginative then adults thus, they are able to stretch out and explore the environment that surrounds them; however, like in Thomas’ “Fern Hill”, time eventually runs out and eventually one has to return to the reality. This idea relates to the image of the birch which initially stretches out tall, but over time begins to fall towards the ground. The sacrifice of one’s innocence with age is a concept that is distressing; therefore, it injects an element of dejection into Frost’s poem that was previously absent.

Coleridge, Thomas and Frost have all created unique poems that contain elements of dejection; however, the amount of dejection within these poems is blurred when considering the superficial meaning of the poem imposed by the speaker as well as the nature imagery incorporated within to the text. The meanings of “Dejection: An Ode”, “Birches”, and “Fern Hill” are altered significantly by the images the speaker is surrounded by. “Dejection: An Ode” moves from being a poem about loss to being a brilliant poem about the power of the beauty of nature.

“Fern Hill” is initially about the beauty of life, but the images used turn it into a poem about the inevitability of death. Finally, “Birches” is about the innocence of childhood; however, it also deals the loss of that innocence as one begins to age. Clearly, all three poems contain elements of dejection at one point; however, the presence of that dejection is tested in Coleridge’s case, and increased within the Frost and Thomas poems. It is incredibly ironic that the one poem that was an ode to dejection turned out to be the most positive of the three.

Poets often use nature imagery to comment on the relationship between humans and the natural environment surrounding them. (2020, Jun 02). Retrieved from https://studymoose.com/poets-often-use-nature-imagery-comment-relationship-humans-natural-environment-surrounding-new-essay 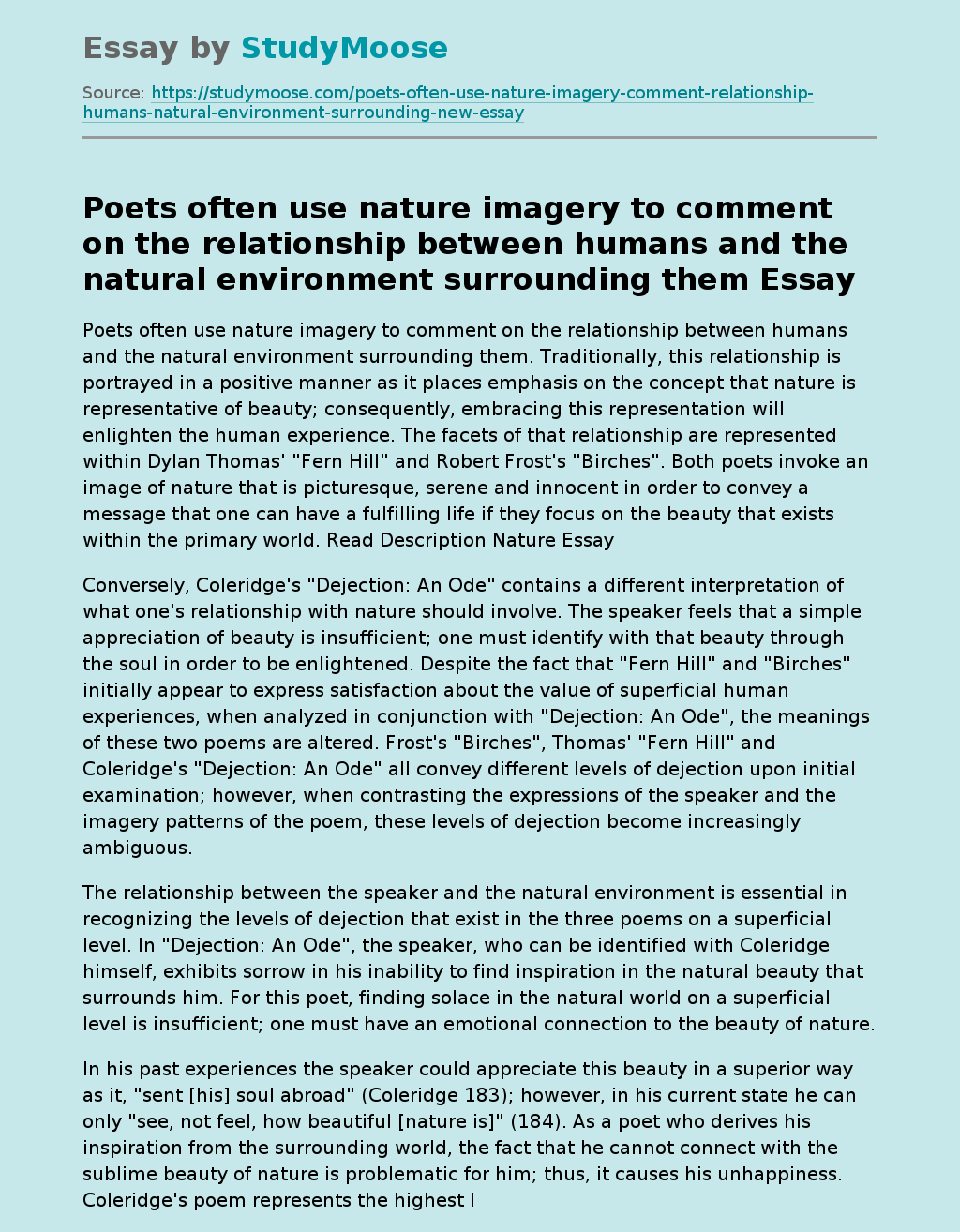