The Brain and Behavior Essay

The human brain is a complex and sophisticated organ. Understanding the function of the brain is often limited to the understanding of the brains areas with regard to how these areas respond to stimuli or in cases of damage. Much of the understanding of the brain is rooted in observation of damaged brains and their correlation of impaired function with specific areas of damage. Modern technologies have begun to change this trend because tools such as the Magnetic Resonance Imager (MRI) allows scientist to observe brain function with the invasiveness of surgery.

This technology has provided not just insights into neuroscience but also into psychology as brain functions can now be correlated better with behavior and heredity. One can see this insight when examining specific areas of the brain such as the temporal and frontal lobes of the brain.

The cerebral cortex is “a large, deeply wrinkled sheet of neurons, or nerve cells, on the surface of the brain’s two hemispheres”.

These are defined as the right and left hemispheres and make up the largest volume in the brain. The cerebral cortex controls all sensation, thought, comprehension, higher cognition, ideas, language, memory and emotion (Pinel, 2011). The hemispheres consist of four lobes, with each performing a specific function (Pinel, 2011). * Frontal lobe: behavioral activities such as decision-making, setting goals and planning * Parietal lobe: concentration and language understanding, visual, sensory and spatial orientation * Occipital lobe: processing of the visual information received to temporal and parietal lobes * Temporal lobe: identifies visual and auditory information, assists in language comprehension, smell and balance.

From a behavioral standpoint the frontal lobe and the temporal lobe impact behavior in a variety of ways. For instance, the frontal lobe appears to control ethical reasoning along with decision making. Damage to this area of the brain can result in increased irritability, violence and loss of impulse control. Likewise, the temporal lobe is involved in the identification of auditory and visual information. If this area of the brain is damaged, this can cause dementia and mania.

The most common form of damage to the frontal and temporal lobe is respectively known as Broca’s and Wernicke’s aphasias. Aphasia is a disorder that impairs the expression and understanding of language (NIH, 2008). It occurs generally as a result of stroke or head injury but can be the result of disorders such as dysarthria or apraxia. In Broca’s aphasia, which is caused by damage to the frontal lobe, sufferers speak in short phrases with great effort. They understand most speech but become irritated and frustrated easily because of their condition (NIH, 2008). In contrast to Broca’s aphasia, Wernicke’s aphasia damage occurs in the left temporal lobe. Sufferers of Wernicke’s aphasia will speak in long sentences that are nonsensical. These individuals are often unaware of the problem (NIH, 2008).

When functioning normally, the lobes of the brain allow individuals to function and behave appropriately and with control. While these behaviors are controlled by the lobes of the brain, they are also impacted by heredity. In accordance with the Big 5 Personality Theory, personality is comprised of a number of general dispositions. There are, in general, five categories of personality traits (Baumgardner & Crothers, 2009). The interaction between the five traits determines personality and behavior. The five traits include: extraversion, agreeableness, conscientiousness, neuroticism, and openness. The best way to understand these traits is to imagine each on a continuum such introversion to extroversion. A person’s degree of these traits would depend on where they are placed on the continuum.

The Big 5 claims that these traits are fundamentally the same throughout life and they are developed through biological and social interactions, but are mostly formed through biological traits. The primary idea in the Big 5 theory is that social interaction and biological trait formation are inseparable and cannot be measured in terms of a trait being solely hereditary or social in nature. For this reason, behavior that is regulated by the brain is also dictated by it meaning that a person who is naturally impulsive may become extremely impulsive if they were to damage their temporal lobe. In this way, the understanding of brain function correlates directly with trait theory.

The Brain and Behavior Essay. (2016, Jun 13). Retrieved from http://studymoose.com/the-brain-and-behavior-essay-2-essay 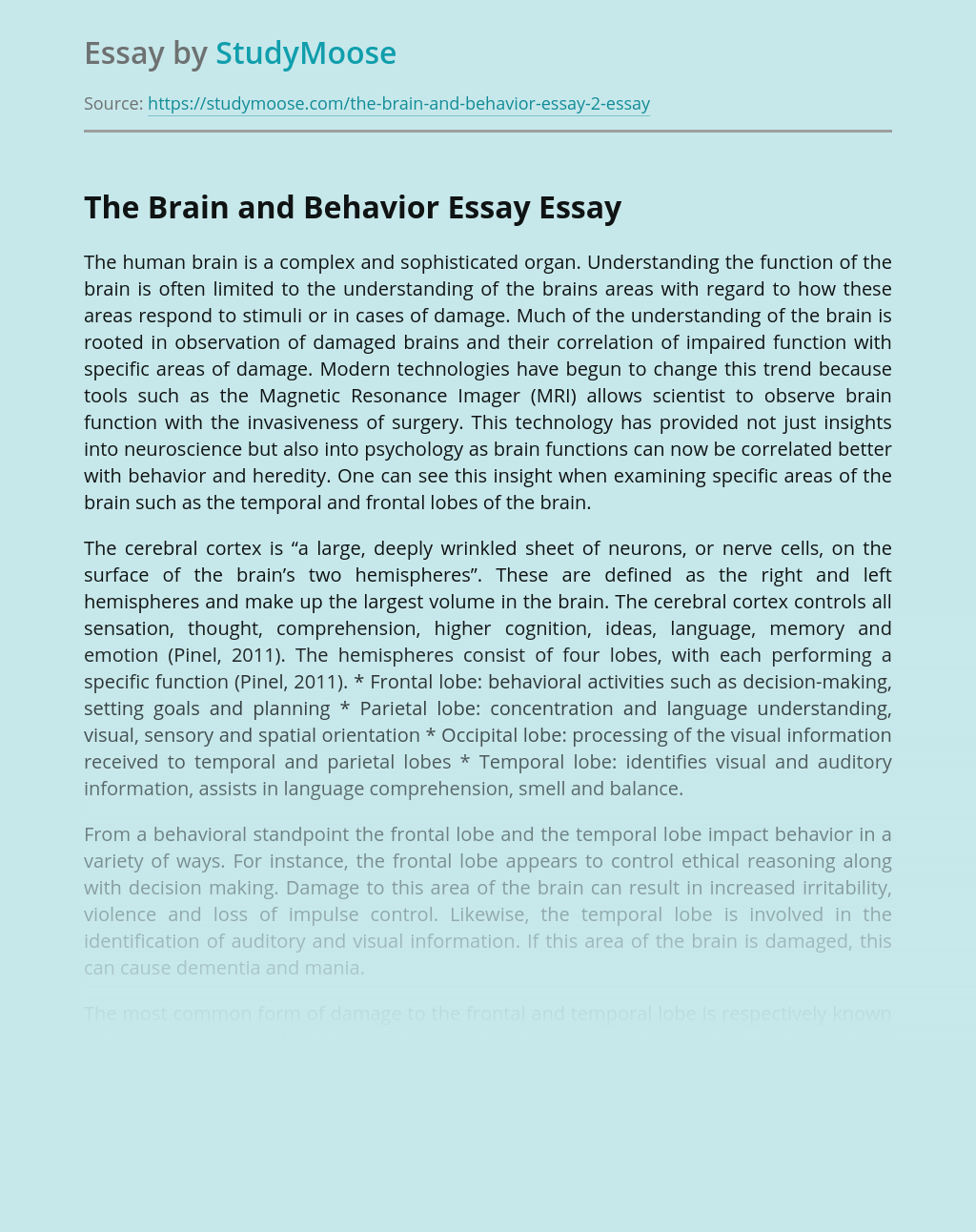 Don’t waste time
Get a verified writer to help you with The Brain and Behavior Essay
Hire verified writer
$35.80 for a 2-page paper
Stay Safe, Stay Original