Right and left-handedness in humans

Why do humans, virtually alone among all animal species, display a distinct left or right handedness? Not even our closest relatives among the apes possess such decided lateral asymmetry, as psychologists call it. Yet about 90 per cent of every human population that has ever lived appears to have been right-handed. Professor Bryan Turner at Deakin University has studied the research literature on left-handedness and found that handedness goes with sidedness. So nine out of ten people are right-handed and eight are right-footed.

Turn in your highest-quality paper
Get a qualified writer to help you with
“ Right and left-handedness in humans ”
Get high-quality paper
NEW! AI matching with writer

He noted that this distinctive asymmetry in the human population is itself systematic. “Humans think in categories: black and white, up and down, left and right. It’s a system of signs that enables us to categorise phenomena that are essentially ambiguous.’ Research has shown that there is a genetic or inherited element to handedness.

But while left handedness tends to run in families, neither left nor right handers will automatically produce off-spring with the same handedness. What then makes people left-handed if it is not simply genetic? Other factors must be at work and researchers have turned to the brain for clues.

In the 1860s the French surgeon and anthropologist, Dr Paul Broca, made the remarkable finding that patients who had lost their powers of speech as a result of a stroke (a blood clot in the brain) had paralysis of the right half of their body. He noted that since the left hemisphere of the brain controls the right half of the body, and vice versa, the brain damage must have been in the brain’s left hemisphere.

Some 30 per cent have right hemisphere language. Dr Brinkman, a brain researcher at the Australian National University in Canberra, has suggested that evolution of speech went with right-handed preference. In her studies of macaque monkeys, Brinkman has noticed that primates (monkeys) seem to learn a hand preference from their mother in the first year of life but this could be one hand or the other. Two American researchers, Geschwind and Galaburda, studied the brains of human embryos and discovered that the left-right asymmetry exists before birth. But as the brain develops, a number of things can affect it.

Right and left-handedness in humans. (2016, Mar 12). Retrieved from https://studymoose.com/right-and-left-handedness-in-humans-essay 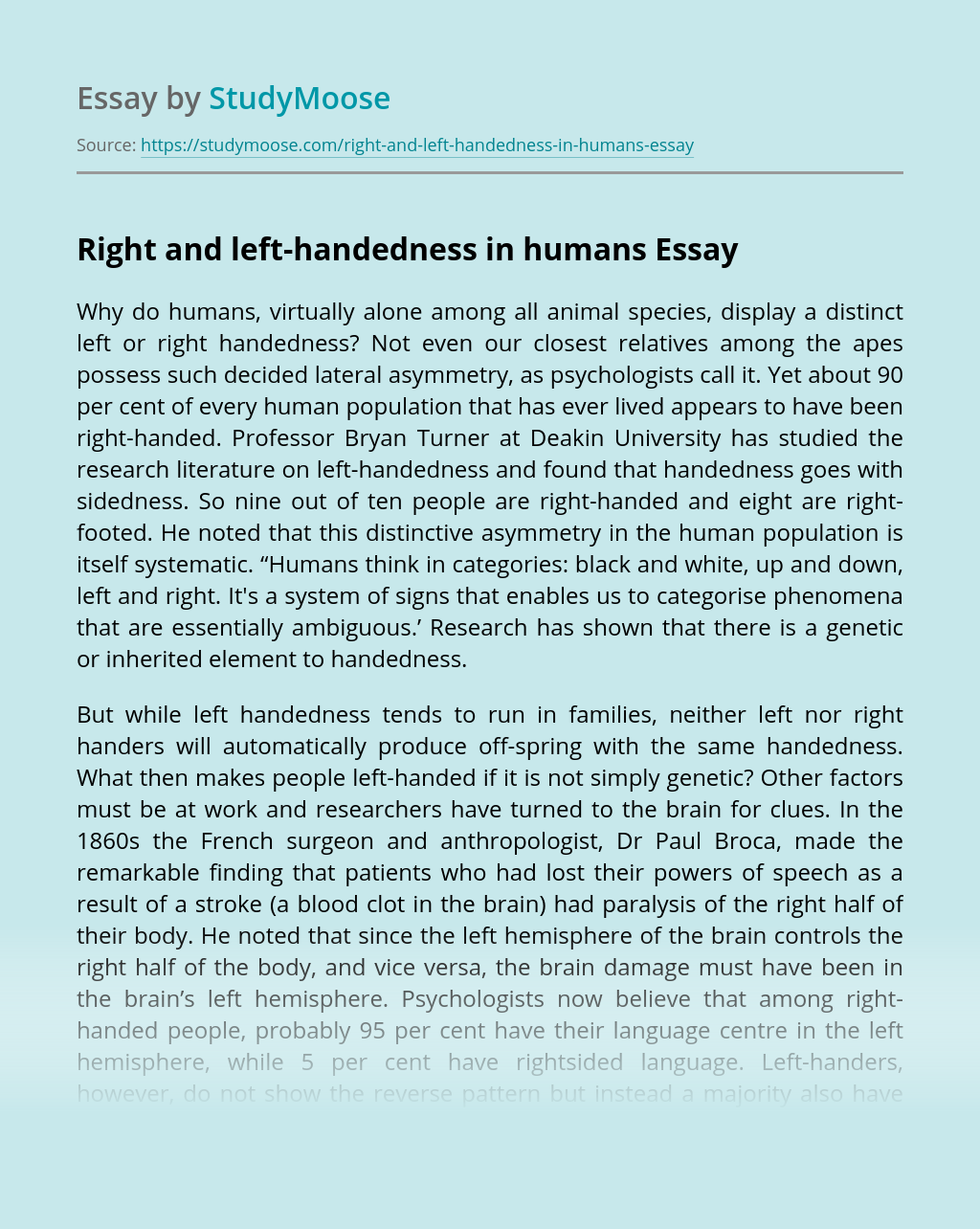 Turn in your highest-quality paper
Get a qualified writer to help you with
“ Right and left-handedness in humans ”
Get high-quality paper
Helping students since 2015
Stay Safe, Stay Original