Comparison of literature - Relationship with nature

How have these two authors expressed their relationships with nature? After reading and analyzing “The Calypso Borealis,” an essay by John Muir, and William Wordsworth’s poem, “I Wandered Lonely as a Cloud,” write an essay in which you describe how each author views nature and answer the question. Support your discussion with evidence from the text. I. Hook: John Muir and William Wordsworth were both two lonely people who had their love, passion, and connection for nature in common.

Don't use plagiarized sources. Get your custom essay on
“ Comparison of literature – Relationship with nature ”
Get custom paper
NEW! smart matching with writer

Nature had brought them an abundance of joy, and took away their loneliness and sad states.

Bridge: At some point, they had decided to put it down on paper how it affected them. Muir and Wordsworth described how nature’s essence had healed their minds and healed them of their negativity. The essence of nature brought feelings of peace and serenity to their souls, getting rid of the depression that had once been in their minds. B. Thesis: Wordsworth and Muir convey their deep connection and passion for nature by utilizing similes and hyperboles to assert the reader how much nature has affected their life.

II. Topic Sentence: As much as John Muir loves to set off on journeys to discover different, unique kinds of plants, this was one of his favorite encounters he’s ever had, and it was also the one that affected him immensely.

Example, Reason, Detail, or Fact from the text: In the essay, he states that “this Calypso meeting happened some forty-five years ago, and it was more memorable and impressive than any of my meetings with human beings”.

B. Explanation: Even though it was a long time before he wrote the essay, finally coming face to face with the Calypso borealis moved him so much. He felt mesmerized by the plant, and he was overwhelmed with passion and emotion at the sight of it. C. Example, Reason, Detail, or Fact from the text: Muir had also rendered that he had felt “strong and exhilarated as if never more to feel any mortal care.”

Explanation: In other words, he felt like there was nothing that could bring him down. As soon as he saw that plant, he felt as if he could carry the whole world on his shoulders, like nothing could stop him. III. Topic Sentence: Although Muir wasn’t the only one that felt fulfilled by nature, William Wordsworth also felt similar towards nature. He wrote I Wandered Lonely as a Cloud about a specific field of daffodils he walks among that fills him with delight. A. Example, Reason, Detail, or Fact from the text: For instance, Wordsworth uses words with positive connotation like glee, gay, jocund, bliss of solitude, and pleasure throughout the poem.

Explanation: He tends to use it to describe the positivity and happiness he feels because of the daffodils. C. Example, Reason, Detail, or Fact from the text: Another thing that proves his happiness in the poem is the fact that in the beginning, he said he wandered lonely as a cloud, meaning he was walking about aimlessly as he felt alone. D. Explanation: Then he saw a whole crowd of daffodils, and now whenever he feels numb or empty, he just thinks about the daffodils, and his heart will “fill with pleasure and dances with the daffodils.”

You will write a conclusion in a later lesson and do not need to complete this part now.

Comparison of literature - Relationship with nature. (2016, Sep 23). Retrieved from https://studymoose.com/comparison-of-literature-relationship-with-nature-essay 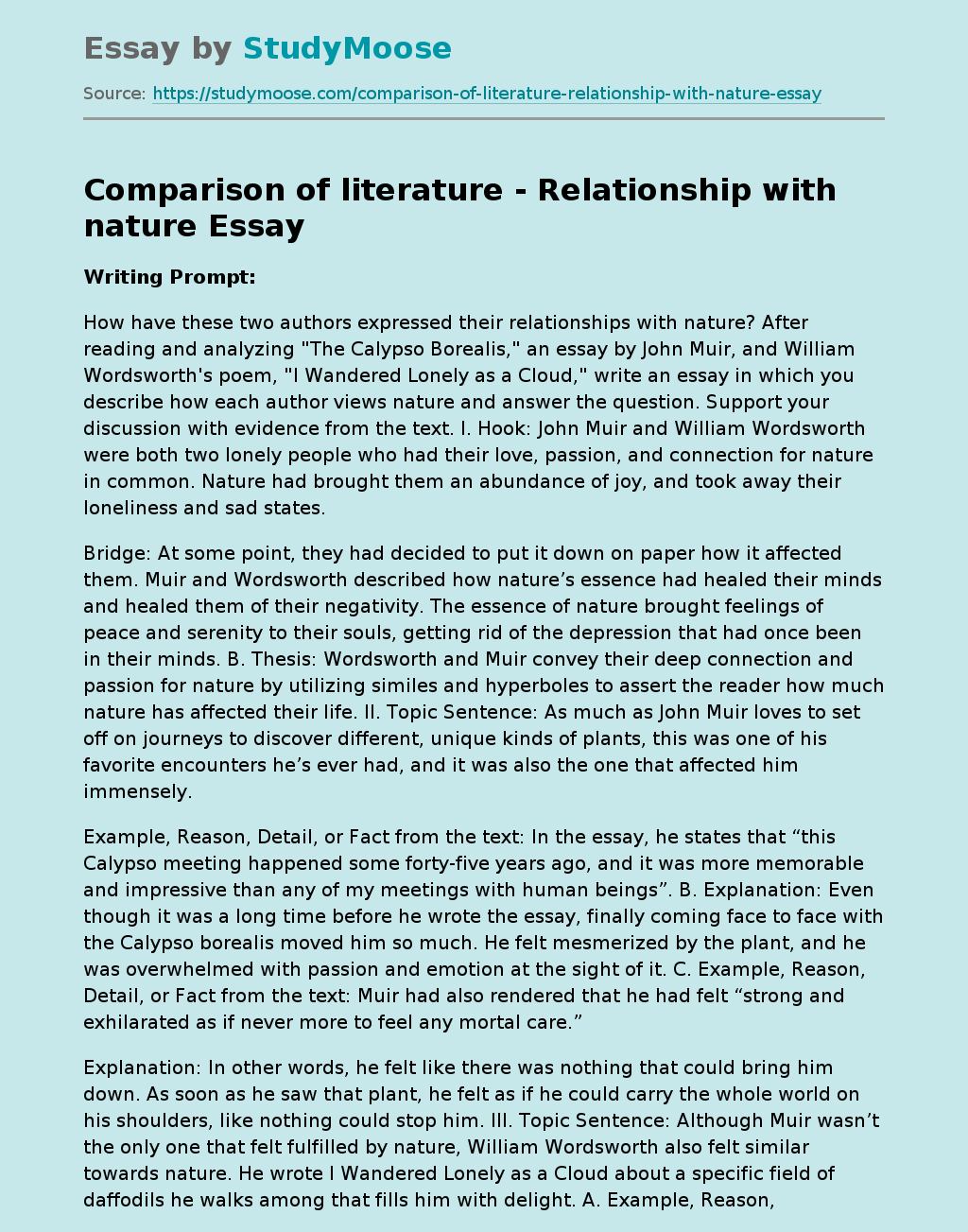