Don't use plagiarized sources.
Get Your Custom Essay on Nature in Literature Just from $13,9/Page

On page 413 in Basho’s piece, it says “As the year gradually came to an end and spring arrived, filling the sky with mist, I longed to cross the Shirakawa Barrier, the most revered of poetic places. ”

From this section, you can see that Basho gets his inspiration for his literature and poetry from the places that he travels, and this resulted in his linked-verse sequence. Even though Basho had a long, tough journey of travels; the nature takes his breath away.

On page 416 of Narrow Road to the Deep North, it says “my body and spirit were tired from the pain of the long journey; my heart overwhelmed by the landscape. ”

This statement shows that regardless of the struggles, he could find a poetic sense in everything he went through. In Narrow Road to the Deep North, Basho also found religion to accompany the bright nature in his literature of his travels. On page 418, Basho writes, “the green of pine is dark and dense, the branches and leaves bent by the salty breeze—as if they were deliberately twisted. A Stalker 2 soft, tranquil landscape, like a beautiful lady powdering her face. Did the god of the mountain create this long ago, in the age of the gods? Is this the work of the Creator?

” The landscape was so beautiful to Basho, that he couldn’t figure out how it came about to be what it was. He questioned if the Gods had created it. From the passages, you can tell that Basho found much beauty in nature on his journey, even though it was a tough one. Voltaire had a much different take on nature compared to Basho. After reading both passages, you can tell that Voltaire’s Candide has a much darker feel to the literature. In the opening paragraph on page 454, Voltaire writes “Once upon a time in Westphalia, in the castle of

Baron Thunder-ten-tronckh, there lived a young boy whom nature had endowed with the gentlest of dispositions. ” This opening sentence makes you believe that it could have a similar feel to Basho’s story. When you reach page 460, there is a line that says “While he was presenting his argument, the air grew thick, the winds blew from the four corners of the earth, and the ship was assailed by the most terrible storm, within sight of the port of Lisbon. ” his passage not only shows you that the nature of the story is a lot more dramatic, but it also shows you that Voltaire is more focused on the weather instead of the landscape. There is a dramatic earthquake and a storm that destroys the ship that they are on.

Page 461 says “Whirlwinds of flame and ash covered the streets and public squares: houses disintegrated, roofs were upended upon foundations, and foundations crumbled. ” Voltaire writing this in his passage just shows the reader how awful and destructive the earthquake actually was. While you understand that they encountered a massive destructive earthquake, they do actually see some light at the end of all the horrible events.

On page 467, it says “’All will be well,’ was Candide’s reply. ‘Already the sea in this new world is better than those we have in Europe. It’s calmer, and the winds are more constant. It is assuredly the new world which is the best of all possible worlds. ’” This statement Stalker 3 shows that the opening statement remains true, that Candide did see nature as gentle, rather than destructive. Overall, reading these two works of literature gives you a great sense of how different Japanese nature in literature is compared to European nature in literature.

Japanese nature in literature has more of a Zen feel to it than European nature does. Japanese literature focuses more on trees and landscapes, while the European literature has a great focus on the weather. Regardless of the occurrences that happened in both stories, both ended with the character looking at the brighter side of things. Nature is a beautiful thing, and both Japanese and European literature acknowledge this as you read in Basho’s Narrow Road to the Deep North and Voltaire’s Candide. 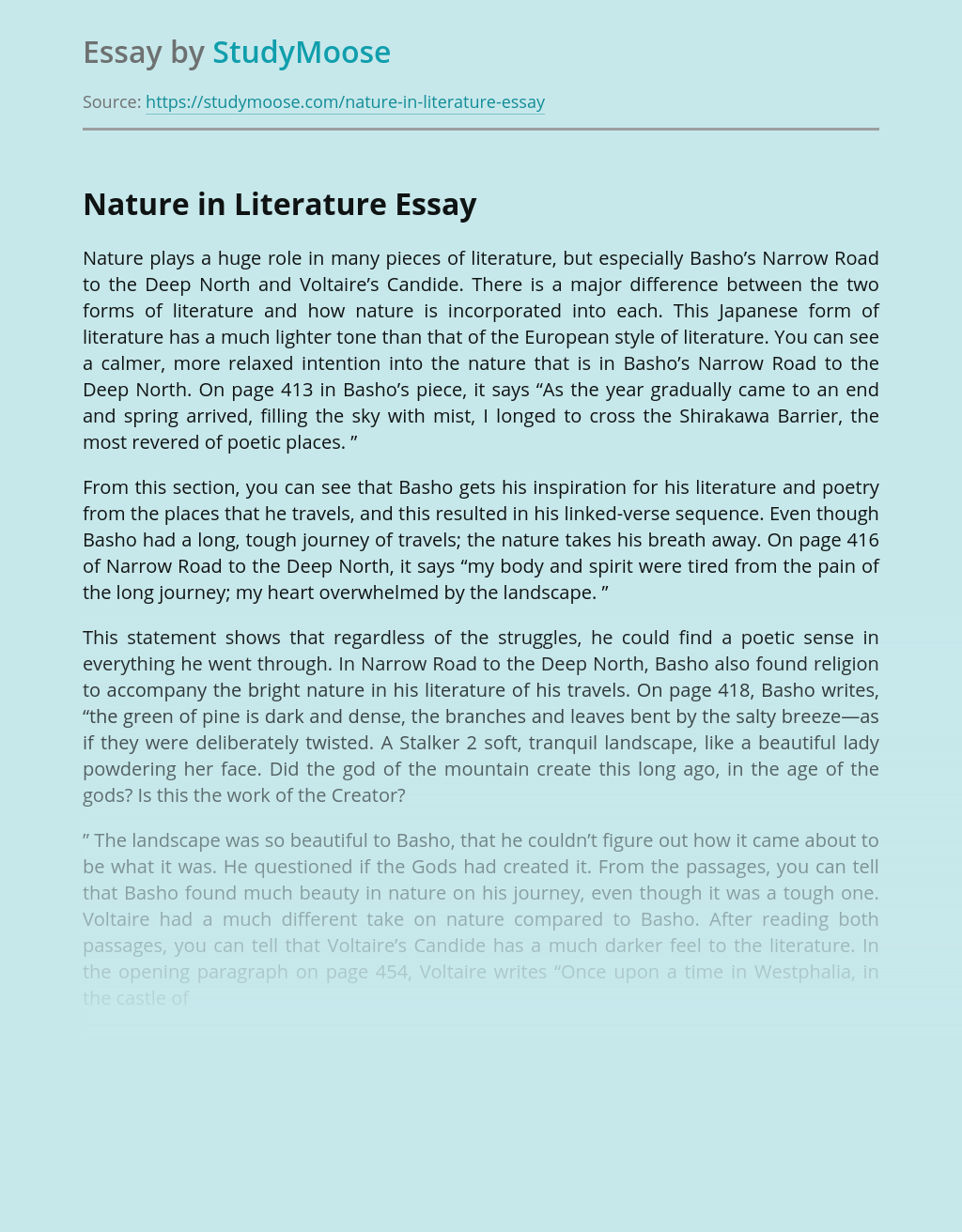 Rate this post Gottfried Leibniz was, among other things, a philosopher and was best known for his philosophy on optimism. Leibniz believed that there existed a supernatural being who created and controlled the world. He further espoused that this being was perfect and being a perfect being could not make anything imperfect. Leibniz was himself...

Explain the Differences Between Pangloss's Philosophy

Get Essay
Fiction Vs. Reality: A comparison of themes in "Tartuffe" and "Candide"

Rate this post When reading a work of fiction, one has to be aware of different writing styles that will clue you into the information that the author wants one to pick up on. In the works, Moliere’s “Tartuffe” and Voltaire’s “Candide” the themes of appearance vs. Don't use plagiarized sources. Get Your Custom Essay...

Rate this post Nature plays a huge role in many pieces of literature, but especially Basho’s Narrow Road to the Deep North and Voltaire’s Candide. There is a major difference between the two forms of literature and how nature is incorporated into each. This Japanese form of literature has a much lighter tone than that...

Rate this post Throughout his novel Candide, Voltaire utilized satire, characterization, and techniques of exaggeration and contrast to attack Candide’s two-dimensional outlook on life and to disprove the overly optimistic philosophy that Candide and Pangloss represent. While the experiences of Candide and Pangloss conflict dramatically with this philosophy, both choose to maintain their beliefs in...