Abstract
The experiment aims to observe if simpler substrates makes the rate of cellular respiration faster. Using yeast, smith fermentation tubes and different substrates namely, starch, lactose, sucrose, glucose and fructose, which are from different kinds of carbohydrates, ranging from the simplest sugars glucose and fructose to the polysaccharide starch and water as the control, the hypothesis was tested. With the span of thirty minutes with five-minute intervals, the height of carbon dioxide trapped in the tube was measured.

The results showed that with the substrate fructose, the rate of carbon dioxide (2.

Don't use plagiarized sources. Get your custom essay on
“ The Effect of the Nature of Substrate on Cellular respiration of yeast ”
Get custom paper
NEW! smart matching with writer

51 ml/min) production was highest followed by sucrose (1.60 ml/min) and lastly, glucose (0.83 ml/min). The remaining three namely starch, lactose and distilled water did not aid in the production of carbon dioxide. Based on the results, yeast were able to break down monosaccharides and disaccharides except for lactose because it lacks the enzyme lactase, which makes the hypothesis acceptable except for sucrose having a higher rate of carbon dioxide produced than the monosaccharide glucose.

This result might have been an effect of a variety of errors during the experiment.

Introduction
Organisms undergo metabolic processes to sustain and maintain life. One of these metabolic processes is cellular respiration. Cellular respiration is a catabolic process that can be classified as either aerobic or anaerobic depending on the presence or absence of oxygen. It basically uses sugar and water as reactants and water, carbon dioxide and energy as products. This process is essentially a reverse process of photosynthesis that reciprocates the reactants and products (Campbell, 2011).

This experiment focused on the anaerobic respiration of yeast. A catabolic process or catabolism is a degradation or a break down process that releases energy. It converts complex materials into simpler ones like how proteins can be turned into amino acids (Lewis, 1997). There are two types of anaerobic respiration or fermentation, lactic acid and alcoholic.

In lactic fermentation, pyruvate is converted to lactic acid that happens without the presence of oxygen. It usually happens in muscles when oxygen levels are low but respiration still continues that results in the formation of lactic acid within muscles. Alcoholic fermentation, on the other hand, produces ethanol and carbon dioxide (Chiras, 1993).The latter type of fermentation was observed in this experiment with the use of yeast. Yeasts are one-celled organisms from the kingdom fungi. Generally, it consumes carbohydratesas food and release alcohol and carbon dioxide which commercially, are used in making bread, beer and wine.

In an article about the effect of different sugar substrates on the rate of respiration of yeast, the writer mentioned some of the factors affecting the rate ofcellular respiration which includes temperature and nature of sugar solution (“Wolfbrother”, 2010). Sugars are carbohydrates that can be basically classified into three kinds as monosaccharides, disaccharides and polysaccharides. Monosaccharides are the simplest sugars which are the components of the other two kinds of carbohydrates. Some common monosaccharides are glucose, fructose and galactose.

These sugars all have the same formula of C6H12O6 and only differ on the arrangement of atoms.In addition, disaccharides are composed of two units of monosaccharides like maltose (glucose+glucose) and sucrose (glucose+fructose) and lactose (glucose+galactose). The last kind of sugars is polysaccharides which are composed of many units of monosaccharides. Examples are starch, glycogen and cellulose (Manosa and Talaue, 2007). In a previous experiment, a similar experiment using Durham tubes was conducted. In the experiment, a co-factor was added that would The objectives of this experiment were:

1. Toobserve and explain the effect of the nature of substrates on the rate of cellular respiration on yeasts. 2. to explain why yeast cannot break down some carbohydrate within the same kind The experiment on the effect of different substrates on the rate of cellular respiration was conducted at the Institute of Biological Sciences, Wing C, Room 125 of the University of the Philippines Los Banos. Materials and Methods

To measure the effect of the nature of substrate, six Smith fermentation tubes were used for six different set-ups. A smith fermentation tube is a (find definition kahitsa net lang). Each tube contains 15 ml of water, 15 ml of 5% yeast on water and 15 ml ofthe different sugar substrates all in 10% concentration namely, starch, lactose, sucrose, glucose and fructose. On the sixth tube was water and it was used as the control setup. The mixture was
shaken lightly to remove any gastrapped inside the cylindrical part of the tube. Once there was no gas left, a cotton ball was plugged for every tube to prevent air from entering. The Smith fermentation tube setup can be seen in Figure 1.

For a total of thirty minutes with a regular interval of five minutes, the heights of air at the top of the cylindrical part of the tube was measured in milimeter and were recorded as Table 1. The gas that can be seen filling the top of the tube is the by-product of respiration of yeast which is carbon dioxide. And to compute for the rate of evolution of CO2, the volume recorded for the 30th minute was first computed using the following formula: See formula

The rate of evolution of CO2 was then computed by using the following formula: See formula
The gathered data were then put into graphs to show comparisons.

In Figure 1, the comparisons between the heights of carbon dioxide produced with the aid of different substrates can be clearly seen. In the solutions where monosaccharides glucose and fructose were substrates, it was observed that it both lead to the production of carbon dioxide. However, in thedissacharides sucrose and lactose which are both combinations of two monosaccharides lead to two different results. The solution where sucrose was the substrate, carbon dioxide was produced but in lactose, there was no carbon dioxide produced. This phenomenon is a result of the incapability of yeast to secrete an enzyme that could break down the substrate lactose called lactase (Brands, 2005).

Moreover, the polysaccharide starch did not produce carbon dioxide. This is because of the complexity of a starch molecule. Unlike monosaccharides, polysaccharides are composed of many links of monosaccharide that disables yeast to break it down directly. In addition, due to the absence of the enzyme amylase, yeasts cannot process the starch to turn it into glucose. In brewing, for example, for yeast to digest starch, an enzyme is supplied to turn starch to maltose called distase and from maltose, it is further broken down to get glucose. Glucose and water

The theoretical results were not obtained due to errors that might have happened when the experiment was being conducted. Some errors might include improper measurements of the substrates or the other substances in the solution. Also, substrates might have been mixed with each other due to improper handling of the people involved in conducting the experiment.

The nature of substrates can affect the rate of cellular respiration in which the simpler the substrate is, the faster cellular respiration can occur. Using different substrates namely starch, lactose, sucrose, glucose fructose and water as control. These were made into solutions with water and yeast. These substrates were chosen because these belong to different kinds of sugar. Starch is a polysaccharide, lactose and sucrose are disaccharides and glucose and fructose are monosaccharides which is the main point of the experiment. For thirty minutes with five-minute intervals, the height of carbon dioxide produced were measured and recorded in tables. The volume of carbon dioxide were computed and put into graphs. Theoretically, the monosaccharides should have the highest rate of carbon dioxide produced because it is an indication of cellular respiration of yeast.

Based on the results, the highest amount of carbon dioxide was produced with the substrate fructose (2.51 ml) which is theoretically correct. However, fructose was followed by sucrose (1.60 ml), a disaccharide instead of glucose (0.83 ml) which is a monosaccharide like fructose. This can be a result of errors while conducting the experiment.

To get more accurate results, make sure to measure the substances carefully and accurately.

The Effect of the Nature of Substrate on Cellular respiration of yeast. (2016, Apr 20). Retrieved from https://studymoose.com/the-effect-of-the-nature-of-substrate-on-cellular-respiration-of-yeast-essay 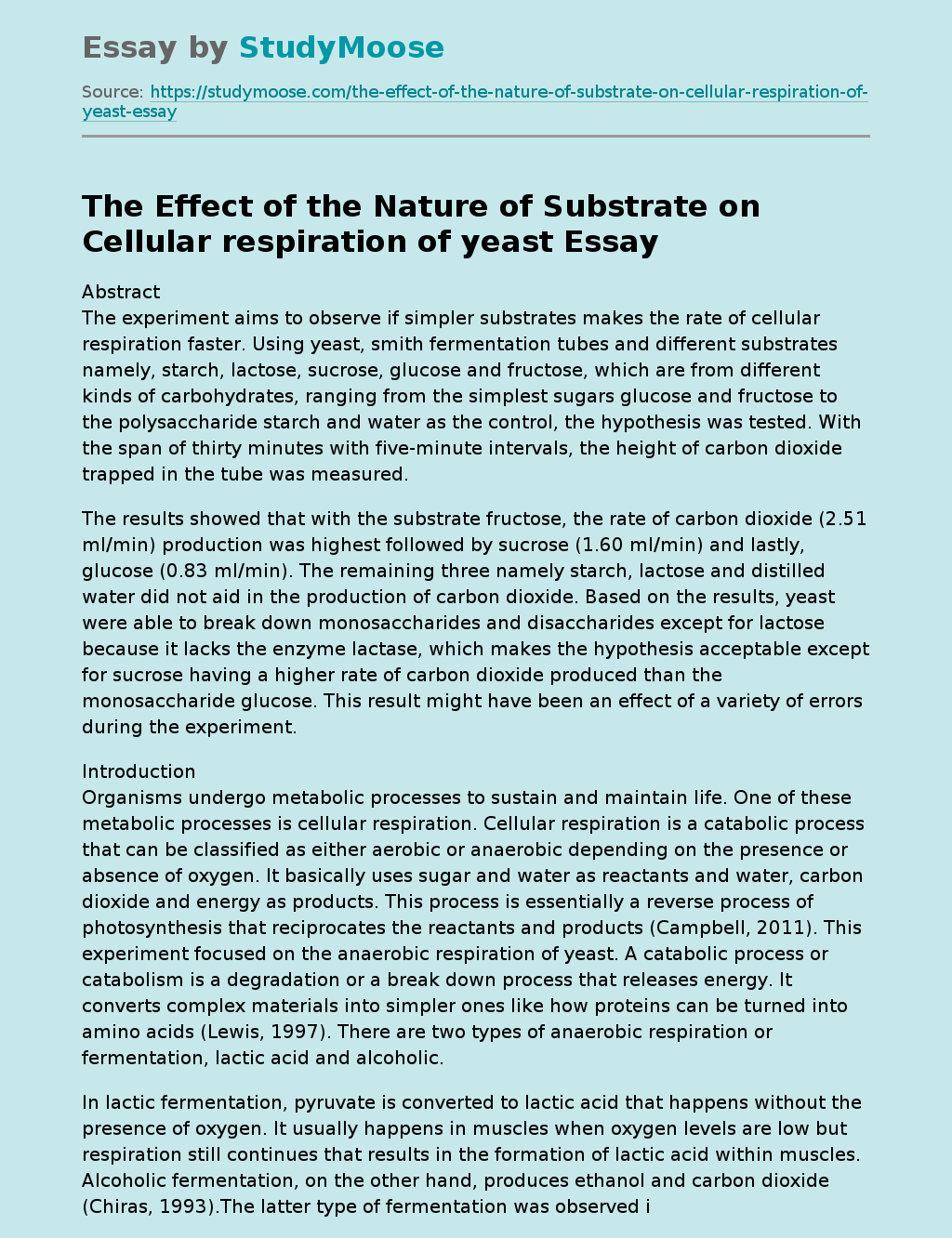