Cells of all organisms are capable in acquiring the energy necessary to fuel chemical reactions for growth, repair, survival, and reproduction. Photosynthesis & cellular respiration are the main pathways of energy flow in living things. Photosynthesis is a process by which plants and some other organisms convert, light energy from the sun, CO2 from the air & H2O from the earth, into chemical energy stored in molecules like glucose. Cellular respiration is a process in which O2 is delivered to cells in an organism & metabolic process in cells leads to the production of ATP by the breakdown of organic substances.

Cellular respiration occurs in the mitochondrion of the cell and photosynthesis occurs in the chloroplast. There are some similarities between the process involved however their products and reactants are the exact opposite.

Photosynthesis can be divided into two stages: Light Reaction & Calvin Cycle. The process of photosynthesis begins when excited its electrons go into a primary electron acceptor (PEA).

They are then passed onto a series of molecules known as the electron transport chain (ETC). The electrons eventually combine with a proton and NADP+ to form NADPH. Another process called chemiosmosis also occurs in the light reaction. Chemiosmosis is a process in which ATP (energy) is produced. So, light, H2O, ADP and NADP+ are required for the light reaction and O2, ATP & NADPH is produced. The ATP and NADPH molecules then go into the dark reactions.

In the dark reactions, an enzyme combines CO2 with a five-carbon compound (RuBP).

This process makes two G3P molecules. One G3P goes into the production of organic compounds and the other G3P goes back into Calvin Cycle as RuBP. In this reaction, CO2, ATP and NADPH are needed to make ADP, RuBP & NADP+. ADP & NADP+ further go back into light reaction that produces the reactants of dark reactions. This cycle is called a bio-chemical pathway. Sometimes plants can’t produce 3-carbon compounds. There are two types of solutions that plants use: C4 and the CAM Pathway. In C4 pathways, plants synthesize CO2 as a 4-carbon compound and in CAM pathways, plants synthesize their food at night.

Like plants, humans and other animals depend on glucose as an energy source, but they are unable to produce it on their own and must rely eventually on plants for food. Cellular Respiration is the process in which an organism obtains ATP by reacting O2 with glucose to give H2O, CO2 and ATP. Cellular Respiration can be divided into 2 stages: Glycolysis & Aerobic Respiration. Glycolysis takes a six carbon sugar, splits it into two molecules of three-carbon molecules of pyruvic acid. In glycolysis, NAD+ changes to NADH. Four molecules of ATP are produced with a net yield of two molecules. The next step in cellular respiration depends upon whether O2 is present or not. Ifthe O2 isn’t present then cells carry out a different process known as anaerobic respiration (respiration without O2; also called fermentation).

Their main task isn’t producing ATP but recycling NAD+ from NADP. If this didn’t occur then glycolysis would stop because it would use up all the NAD+. Two types of fermentation are lactic acid and alcoholic fermentation. The other process is aerobic respiration. There are two steps in aerobic respiration: Krebs cycle and the electron transport chain. In Krebs cycle, acetyl CoA, which comes from pyruvic acid, is broken down into CO2, hydrogen atoms & ATP. The 2nd stage of aerobic respiration is ETC & chemiosmosis, where most ATP is produced. ETC of both processes is just about the same. So, CO2, H2O & ATP gets produced. The reactants are O2 & C6H12O6.

There are many similarities between photosynthesis and cellular respiration. For example, the most important is the steps it goes through. Although they don’t occur at same places, they do follow a general guideline but involving different reactants. In photosynthesis, plants can change their process if somehing isn’t avalable (CAM and C4 plants) and so can animals in cellular respiration (aerobic and fermentation). ETC in both processess has the same task and the same process. There are other differences too, however. Photosynthesis occurs a cell structure called chloroplasts. Pancake-like sections, called thylakoids, divide chloroplasts. A stack of thylakoid is called grana (granum, plu). A grana is enclosed by stroma. The rate of photosynthesis is affected by the amount of CO2, light intensity and the temperature.

Respiration occurs in the mitochondria of a cell. Krebs Cycle occurs in mitochondrial matrix, the region of space in the inner membrane. The ETC and chemeosmosis occur in the cristae of the mitochondria. Respiration is the opposite of photosynthesis that is explained by this equation: C6H12O6 + 6 O2 → 6 CO2 + 6 H2O + ATP This equation means that O2 combines with sugars to break molecular bonds, releasing ATP. By-products of this reaction are CO2 and H2O. The process of photosynthesis can be assessed as: 6 CO2 + 6 H2O + Light Energy → C6H12O6 + 6 O2 This equation means that CO2 from the air and H2O combine in the presence of sunlight to form sugars; O2 is released as a by-product of this reaction.

In the end, we see that both phtosynthesis and cellular repiration are necessary for living organisms. Both work as biochemical pathways, always recycling and continuing the process. There are some differences and some similiraties betwenn themm, too. Plant cells contain chloroplasts. These little ‘factories’ within the plant cells use the compound chlorophyll to take the energy from sunlight, and combine it with carbon dioxide and water to produce oxygen and glucose. Other ‘factories’ within the cell make use of the glucose molecule; these cell parts are called the mitochondria. Each mitochondrion takes glucose, breaks it down into atoms, and by mixing it with the atoms from more oxygen, and produces carbon dioxide, water and energy in a form that can be used by all cells. 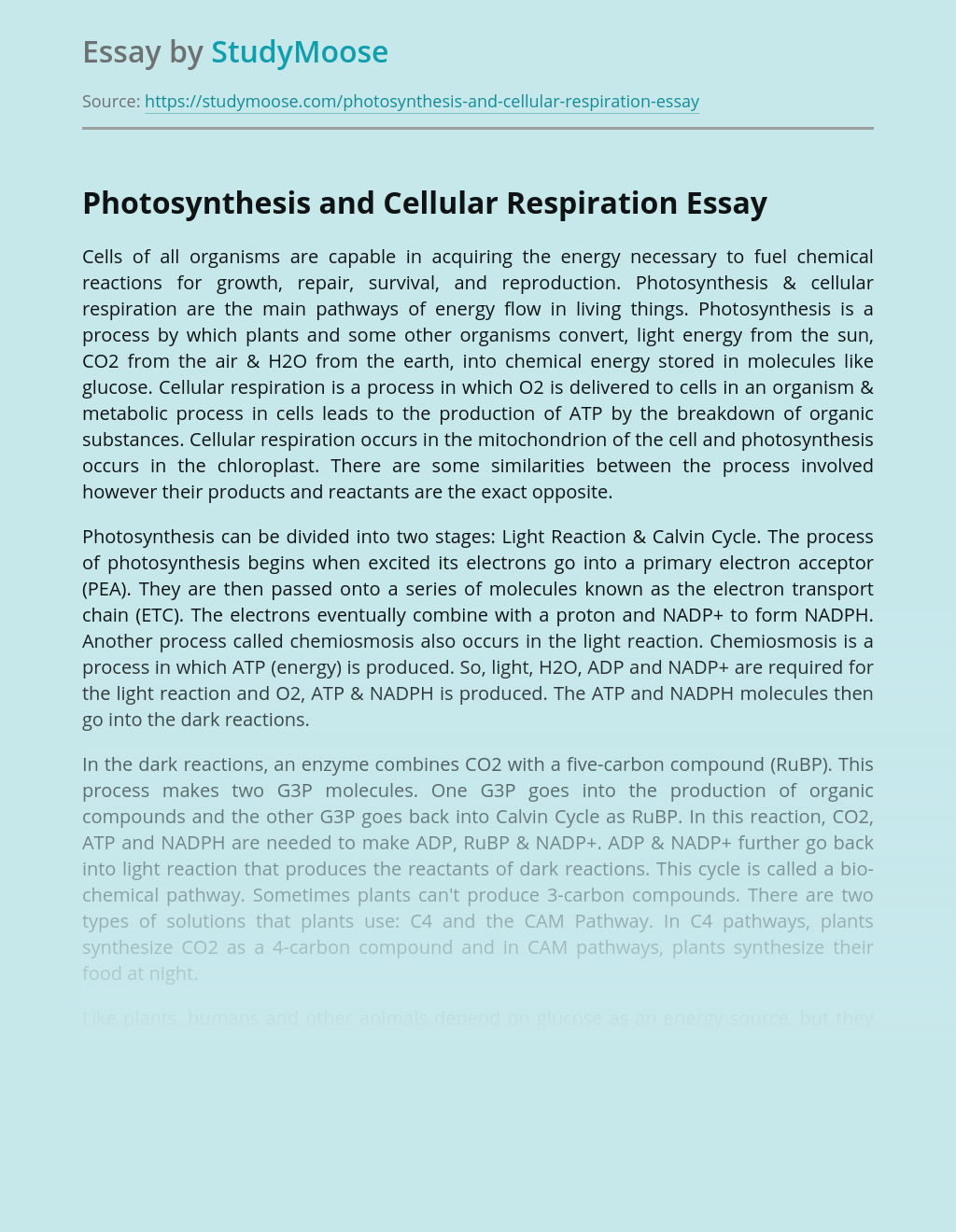 Don’t waste time
Get a verified writer to help you with Photosynthesis and Cellular Respiration
Hire verified writer
$35.80 for a 2-page paper
Stay Safe, Stay Original