Living organisms including all plants and animals require energy for their cellular processes. In biological processes, the immediate energy source is often in the form adenosine triphosphate (ATP). The nucleotide ATP maintains both catabolic and anabolic reactions. An example of a catabolic reaction is respiration where large molecules are broken down into smaller ones with energy released. An example of an anabolic reaction is photosynthesis where small molecules are built up into larger ones using energy. ATP is built up from ADP and inorganic phosphate ions (3-4 PO, abbreviated to Pi) by condensation and is then hydrolysed by the enzyme ATPase to ADP and Pi to release energy that can be used for energy requiring reactions such as photosynthesis in plants.

Don't use plagiarized sources.
Get Your Custom Essay on Energy transfers which take place in living organisms Just from $13,9/Page

Plants are able to produce ATP during the light dependent reaction of photosynthesis in the thylakoid of the chloroplast. Red and blue wavelengths of light are absorbed by chlorophyll in chloroplasts on Photosystem II. The chloroplasts are protected and contained by a membrane, but they are close to the surface of the cell to catch the maximum amount of light.

Their broad length also allows larger wavelengths of light to be absorbed. The energy absorbed is transferred to electrons and excites them to a higher energy level. This leads to the photolysis of water which results in the formation of hydrogen ions, electrons and oxygen gas. The electrons formed during photolysis then replace those excited by the light. The excited electrons are then passed along the electron transport chain in a series of redox reactions from one carrier to the next. The energy released by this passage is used to activate ATPase to combine ADP and Pi to form ATP.

This process of converting ADP to ATP using light energy is known as photophosphorylation. The hydrogen ions released by photolysis are used to reduce NADP. In the stroma of the chloroplast the ATP and reduced NADP are then used for the reduction of glycerate-3-phosphate (GP) to triose phosphate (TP) in the light independent reaction. This TP can then be used to form glucose (which can be used as a substrate for respiration), stored as starch or incorporated into the other plant tissues. The glucose or starch can be used as an energy source directly by the plants, or indirectly by animals which consume, digest, absorb and assimilate the sugars. Glucose is a commonly used respiratory substrate in intestinal epithelial cells in animals to provide energy for useful work. The glucose enters the cell through a specific protein channel by facilitated diffusion, down a concentration gradient using only kinetic energy provided by heat.

In the cytoplasm each glucose molecule is phosphorylated by two molecules of ATP into two triose phosphate (3 carbon) sugars. The triose sugar is changed over several steps (oxidised) to form pyruvate, a 3-carbon compound. The oxidation releases 4 ATP (giving a net gain of 2 molecules) which is the only ATP formed in glycolysis. This is known as substrate-level phosphorylation. Each molecule of glucose forms two molecules of pyruvate and two of reduced NAD, a coenzyme used to transfer hydrogen and electrons. Once pyruvate has entered the inside of the mitochondria (the matrix), it combines with coenzyme A in the link reaction to produce acetylcoenzyme A. In a series of oxidation-reduction reactions the Krebs cycle generates reduced coenzymes and ATP by substrate-level phosphorylation and carbon dioxide is lost. NADH from the Krebs cycle releases its H as protons and electrons and is oxidised to NAD, which returns to the Krebs cycle.

The electrons are transferred down the electron transport chain in a series of redox reactions in the inner mitochondrial membrane, releasing their energy as they go. Oxygen (the terminal electron acceptor) combines with hydrogen and the electrons to form water. The energy of the electrons is used to pump protons across the inner mitochondrial membrane by active transport through the proteins, forming a proton gradient across the membrane. The potential energy in the proton gradient is used to generate ATP in the ATP synthase enzyme. The ATP synthase enzyme has a proton channel through it, and as the protons “fall down” this channel their energy is used to make ATP. This is known as synthesis of ATP by oxidative phosphorylation. The mitochondria are adapted to these processes as they possess cristae (the folded inner membrane) to provide a large surface area of the membrane, thus allowing for more reactions to take place.

The intermembranal space also allows for an electrochemical gradient to be built up during the process of electron transport. Under anaerobic conditions the pyruvate from glycolysis is reduced to lactate in muscle or ethanol and carbon dioxide in yeast. Both of these reactions use NADH and regenerate NAD, however the lactic acid anaerobic respiration in animals and bacteria is reversible whereas ethanolic anaerobic respiration is irreversible. The respiration process also produces a lot of heat that is used to provide kinetic energy of processes such as osmosis and diffusion of molecules such as oxygen across exchange surfaces. ATP is used to provide energy to a host of reactions in all organisms.

In animals, kidneys use ATP for the active transport of sodium chloride out of the distal straight tubule of the loop of Henle in order to lower water potential in the surrounding tissues. This generates a water potential gradient which causes the reabsorption of water through the permeable descending limb leading to the production of more concentrated urine. Plants require the translocation of glucose (as sucrose) from source cells to sinks (roots, fruits and shoots) to provide an energy source for non-photosynthetic tissues.

This is achieved through active transport of sucrose (using energy from ATP) into the phloem which lowers water potential. This causes water to enter by osmosis generating a hydrostatic pressure which forces the sugar solution up and down the phloem towards the sink regions. In order to provide support, plants need a flow of water to enter the roots from the soil. This is achieved again by active transport of mineral ions such as potassium and nitrate from the soil, against a concentration gradient, using energy supplied by ATP. The lower water potential in the root hair cells now draws in water which moves towards the endodermis through the apoplast (gaps in the cell walls) and symplast (through cell cytoplasm) pathways. 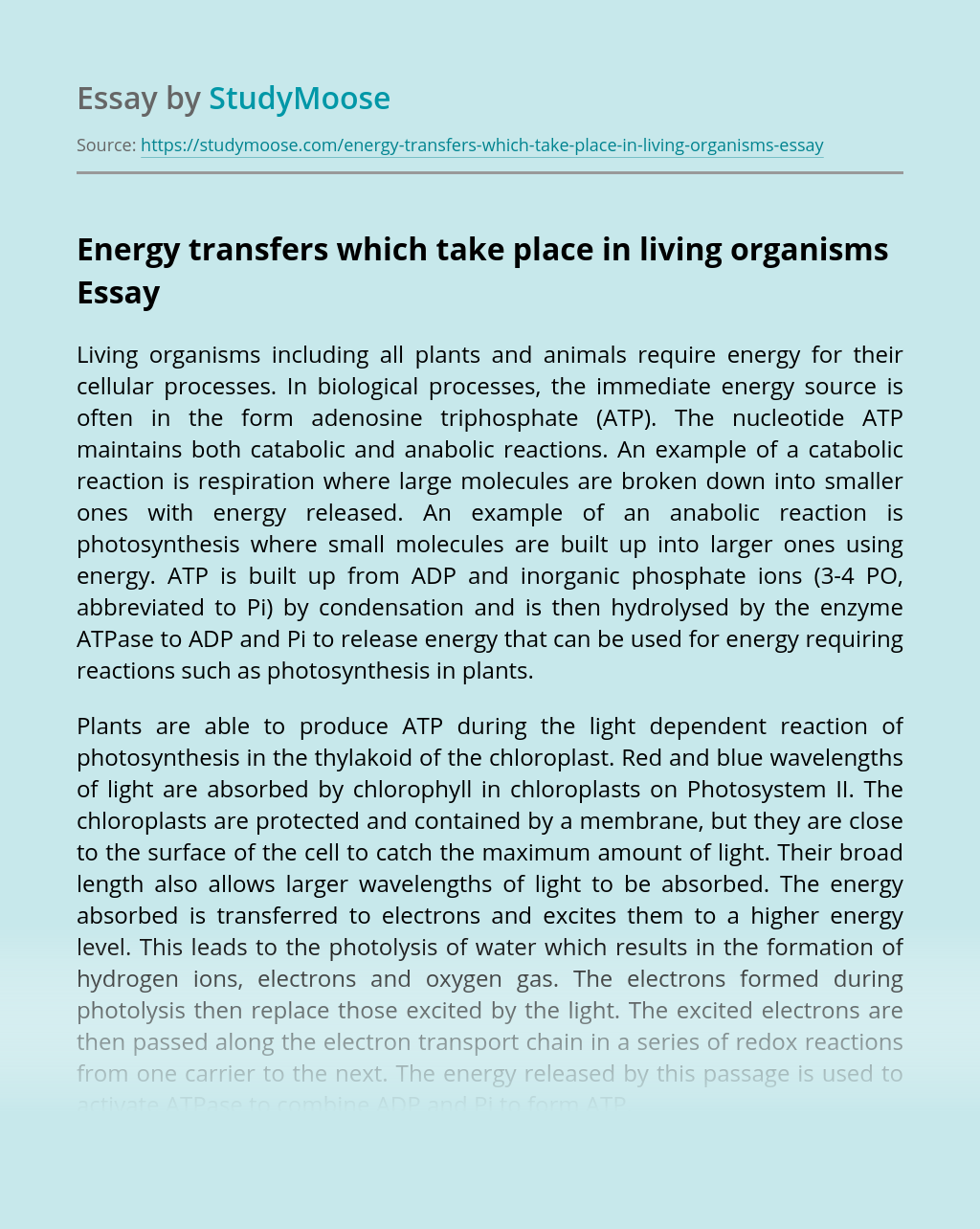 How Messed Up Education Can Be

So just like any other year, students have to attend the opening ceremony; my little sister sat down in the last rows filled with graffiti in the auditorium I looked up and thinking to myself, “ They changed the principle again, whoever in charge, do they think it will fix the problems? ” They have...

For my strategic group map, we need 3 competitive groups: 1. Aspirants 2. People who are typically on the same as me. 3. Fast followers group Put on the strategic map Chapter 3 Assignment This learning Module introduces the learner to the tools for external environmental analysis. Properly understanding a company’s external environment requires asking...

Get Essay
Class Divided Reflection on Racism And Discrimination

Everyone is likely to experience some form of discrimination or prejudice; as is anyone capable of acting prejudiced towards others. On April 5th, 1968, a teacher in Riceville, Iowa named Jane Elliot conducted an experiment with her third grade class that dealt with the concept of discrimination; and was documented in Peters’ 1985 ‘A Class...

Many teenagers fall into unhealthy eating habits for a variety of reasons; stress, the desire to lose weight, peer pressure etc. These unhealthy eating habits, may not cause damage immediately (although they sometimes do) but they are followed by a host of health issues. Sound nutritious habits play a role in the prevention of common...