Is Graffiti an Art or a Crime

Through the years, people have expressed themselves in different ways and manners. Some have chosen photography, drawings or sculpture. Others came up with new ways like graffiti which is a new form of urban expression that made controversial reactions. I believe that some graffiti is an artistic performance because of its expressive nature, beautiful display, and creative ways. The rest of it reveals a criminal behavior since it uses others’ properties without permission or consideration, harms the urban landscape, and sends negative messages.

Turn in your highest-quality paper
Get a qualified writer to help you with
“ Is Graffiti an Art or a Crime ”
Get high-quality paper
NEW! AI matching with writer

The major differences between both perceptions are the aim of the taggers and location of the tags. On the one hand, taggers have produced beautiful and expressive pieces that people appreciated. During a class trip to 5 Pointz, an outdoor art exhibit space in Long Island City, New York, where graffiti is permitted and regulated. I stood for few minutes in front of a tag of ghostly skulls surrounded by flames (The Picture).

The skulls had an expression on their skinless faces that made me feel like hearing the sound of those portrayed people as if they were screaming out in pain with the sound of evil laughter in the background.

This mixture of its beauty and livelihood made me and my classmates enjoy the experience. In addition, after admiring the excellence of the tags, I thought that those taggers must be very talented and creative to come up with such beautiful artworks, especially on those large surfaces and hard-to-reach places, bearing in mind that they’re only using spray paint.

It makes you wonder how they could make all those fading colors and shades, and transform bare walls into three dimensional objects. They certainly are very creative and highly skilled. Before leaving the site, I noticed that there was a transportation corporation that actually had graffiti artists tag its wall with trucks to make it more appealing to commuters, which affirms that people do like and appreciate this art as long as it belongs where it is permitted.

On the other hand, I denounce the effect that graffiti has had and continues to have on our urban landscape. That’s where it gets associated with vandalism, because instead of tagging specified places, taggers choose train cars, bridges and public walls, which make the cities look messy and hasty, forcing the authorities to spend unnecessary money to paint them over. Furthermore, most of graffiti, especially those done discretely and with no permission display gang names, obscene language and silly drawings which make many people think of it as crime and violence.

In McCann’s novel Let the Great World Spin, Ciaran was accompanying his brother and looked across the van window to a church, and said “It was daubed in graffiti—whites, yellows, reds, silvers. TAGS 173. GRACO 76. The stained- glass windows had been broken with small stones. Even the cross on top was tagged. ” (McCann, 34). When he said that even the cross was tagged, I thought that they were making a statement that their pride and art are above religion, and thus above other people’s beliefs and feelings. Graffitists were invading every surface, including sacred and religious ones.

It seemed that they find their pleasure in what annoys and bothers their community, just like the person who gets pleasure in consuming drugs that are poisoning his own body. They leave others clean up, deal with the trauma of property damage, and wonder why their property became a target, whether it was hate and racism act, or just a tool in somebody’s careless adventure. Whereas many people find it hard to categorize graffiti, I think that the taggers are the ones who make of it an art or a crime based on their purposes and the locations they use.

For instance, when I come across a tag that catches my eye, even if it is visually pleasant, it bothers me a lot to see that the tagger made it with the intent of defying the authorities, damaging public or private property, or just challenging and cursing his rivals, instead of making it to express himself and display his high talent. It loses its artistic value and becomes a cheap tool for his malicious intentions. I also believe that it depends heavily on where they’re putting up their work.

If a graffitist uses the walls of my building without my permission, I would not be happy, and I certainly would not consider that as an artistic act, but as a reckless behavior showing disrespect. It is just as if someone rode your bike, without your permission, to perform some stunts and then brought it back to you and expected you to appreciate that. That is insane. Inversely, if the tagger performs on a spot where it is regulated and permitted (like the 5 Pointz site), I would get to see his pieces from a positive perspective.

In conclusion, graffiti is basically an artistic performance that contains talent and aesthetic vision. It also is very expressive and meaningful. But, some taggers use individuals’ and public properties without their permission displaying gang-like negative messages and vandalizing our urban scenery which makes many of it considered as a criminal act. What distinguishes between graffiti being art and graffiti as an act of vandalism is the intent of its producers and the spots they chose to display their pieces. As people continue to live, there will continue to be inventions of new methods of social expression.

Is Graffiti an Art or a Crime. (2016, Dec 07). Retrieved from https://studymoose.com/is-graffiti-an-art-or-a-crime-essay 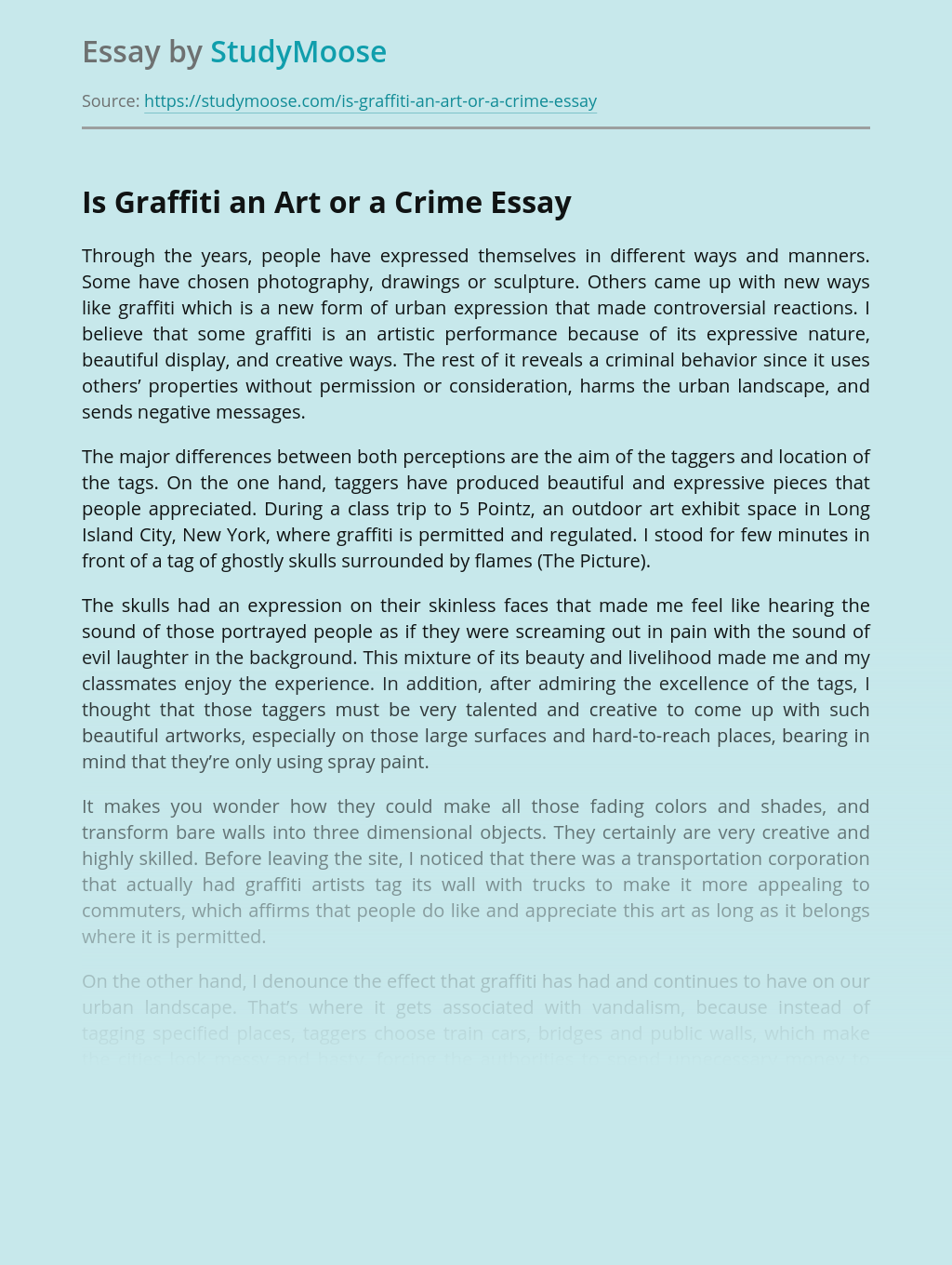 Turn in your highest-quality paper
Get a qualified writer to help you with
“ Is Graffiti an Art or a Crime ”
Get high-quality paper
Helping students since 2015
Stay Safe, Stay Original