While some people consider graffiti to be an art form, most people think of it as vandalism. It is destructive, costly, chaotic and repulsive. It is also done without the consent of the property owners, whether private or public. Some graffiti also contain words, images or representations of ideologies that are offensive and derogatory to many people.

There are other creative outlets that can express one’s feelings without destructive effects; thus, these vulgar forms of art have no place in a civilized society.

Don't use plagiarized sources. Get your custom essay on
“ Graffiti is Vandalism ”
Get custom paper
NEW! smart matching with writer

Graffiti is Vandalism In 1994, an 18-year-old American, Michael Fay, was flogged or caned in Singapore for vandalism after spray painting several cars, stealing signs and switching license plates. It was the first time that an American had been caned in Singapore, so international media coverage was heavy. Even President Bill Clinton tried to intervene to lighten the sentence. But in the end, the flogging continued since many Americans themselves publicly supported the harsh punishment.

As New York’s Daily News reports, 99% of its readers, who responded to Mike Royko’s article about Fay, favored flogging and thought that graffiti and vandalism were serious problems in the United States that were being treated too lightly by the authorities.

Many Americans even called the Singapore Embassy in Washington expressing their support for the Singapore government’s harsh decision. Indeed, graffiti is vandalism because it is unsightly, destructive, done without the consent of the property owner and often expresses ideas, either in symbols or words, that are offensive and disrespectful to many people.

Graffiti creates a very unattractive atmosphere while destroying property. While some people, especially the perpetrators, think that it is art and an avenue for expression, there are many other ways to communicate one’s grievances or frustrations in a truly artistic way. They can paint their thoughts on a canvass and frame it. They can draw and doodle on notebooks, sketch pads or even simple pieces of paper. They can write a blog on free Internet sites such as Google’s Blogspot. Rebels can even sing or rap a song all day and all night.

And if they are up to it, they can also join a drama club and act out their frustrations, an avenue that many professional actors discovered that allows them to express themselves creatively without physical destruction to property. However, if they use a spray can to paint “art” on a wall, a car, a house or any public or private property, without the consent of the owners, then they are ruining other people’s treasures. It will cost the owners a lot of money to repair or replace the damage that was caused if they can even afford to repair or replace it in the first place.

Many public places do not have the budget or the funds to fix any damage perpetrated by graffiti vandals. Thus, graffiti on public places are sometimes left alone, which simply annoys the people in the affected community. Some of the ideas expressed in graffiti are also vulgar, hateful or simply offensive. While some graffiti depict expressions of love, others draw human genitals or describe lustful fits of emotion or physical intercourse without restraint or disgust. Perpetrators may also draw or spray paint gang signs showing their sovereignty in a certain territory.

They may also display symbols of hatred and oppression reminiscent of Hitler’s reign in Nazi Germany. Or they may write racist words that describe people of color. Again, these may be forms of art to people like Hitler, the Ku Klux Klan or street gangs like the Bloods and the Crypts, but for most people, it is rubbish. People simply don’t want to live in a city where they see graffiti all over public transportation, walls, rest rooms, benches, monuments or other forms of property. Even a boulder in a national park deserves respect.

Sometimes, people even carve words and symbols on trees or spray paint boulders just for personal pride. Sometimes tourists feel the urge to prove that they were there or to literally make their mark at a special place that they visited. But it doesn’t really prove anything more than the fact that they are vandals. If they truly want to impress others about their trip, they should take only pictures instead of vandalizing the natural environment. In China, graffiti is also used for political propaganda.

As the BBC reports, in the 1920s, Mao Zedong, China’s communist founder and revolutionary, used graffiti in the form of slogans and paintings to spread his ideology. He even wrote a graffiti containing 4,000 characters, a world record, criticizing China’s terrible societal status and the teachers he had who contributed to it. He later caused much bloodshed, upheaval and suffering among the Chinese people, and it was only later, starting from Deng Xiaoping who reformed China’s economy with a capitalist model, that the country started to progress.

Some current Chinese communist party members use a “legalized” graffiti wall in Beijing that supposedly allows artists to express their feelings. However, local residents claim that it is not real graffiti; they say it is just a bunch of paintings on a wall that depict the party’s propaganda, mimicking the old Mao techniques used in the early days of the revolution. In the end, while some people consider graffiti to be an art, most people think that it is malicious vandalism.

Public places and private property will all look much better if it is non-existent. Money will not be wasted in fixing it, and people don’t have to be offended by words or images that show the animalistic side of men. There are other ways to express feelings and emotions creatively, and these other avenues are the path to a better life and a livable world. References Chen, Dandan. (2007). “In pictures: Graffiti artists in Beijing. ” BBC News. Royko, Mike. (1994, Mar 30). “Readers get ‘behind’ flogging of vandal. ” Daily News. 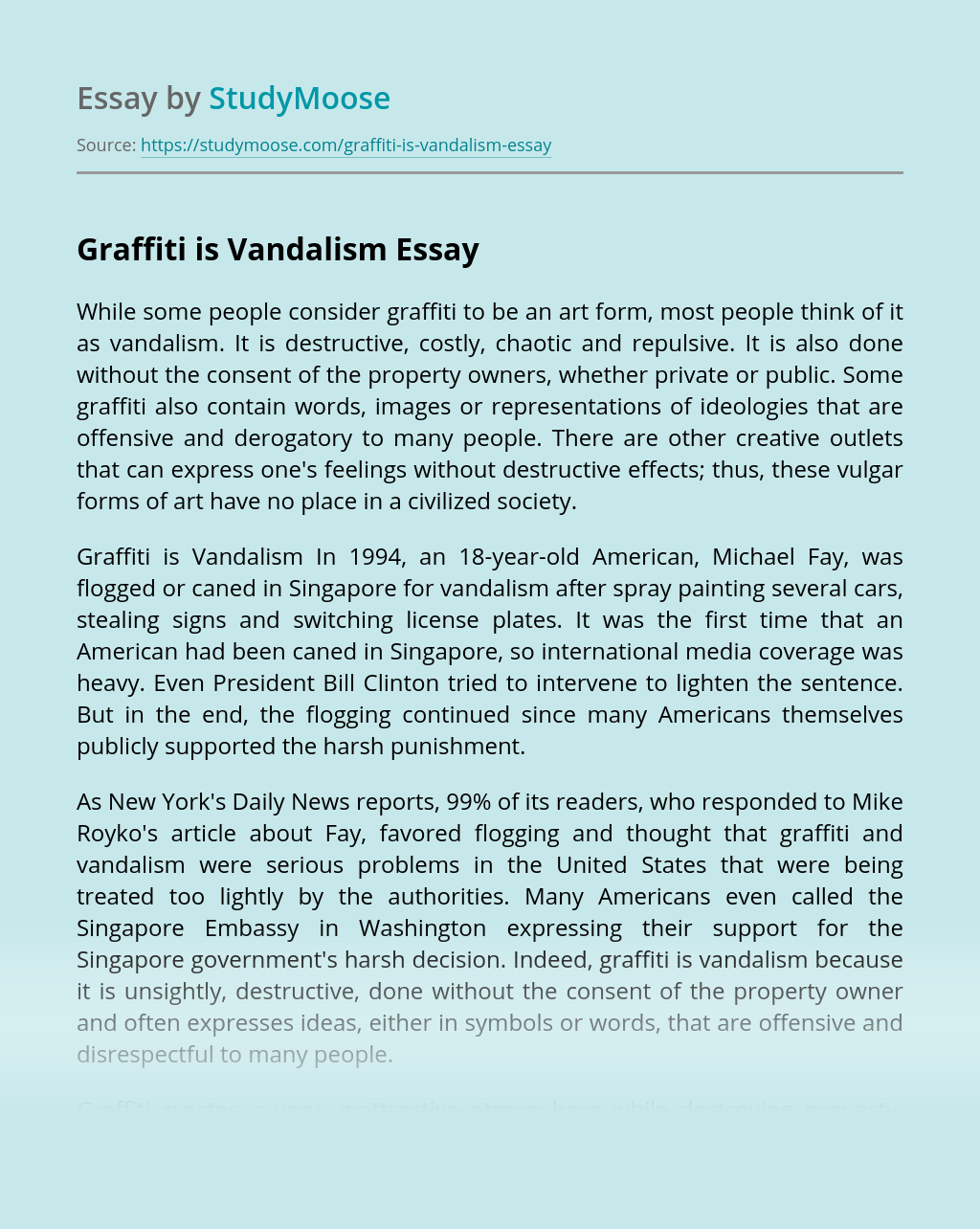