Youth who are damaging public property which not just less educated but also the generation who were genetically born in the city is hard to control. In urban areas some people do not care what is happening around them. This situation makes the youth feel that they are free to pursue this regardless of the negative symptoms of a sense of responsibility towards public property. Next factors is from peer influence.

Peer influence can lead to vandalism

Teenagers usually easier to get influence by their peers.

Don't use plagiarized sources. Get your custom essay on
“ Reasons vandalism happen ”
Get custom paper
NEW! smart matching with writer

Peer influence will formed their attitudes, values and behaviours among the youth, especially youth who have dropped out and have family problem. Usually, teenagers who commit vandalism is a teenager in the group, they do not have a purpose and when gathered arise include scribbling ideas and damaging public property. Also,parenting and family also one of the factors of vandalism among the teenagers. Parents are the impetus for the nature of vandalism among teenagers.

For example, when driving parents who are littering or throwing out rubbish out from their car while ignoring the speed limit signs. This situation literally somehow teach their own kids toward negativity and have no respect to rule & laws. Plus, some teenagers who get caught in symptom vandalism comes from troubled families or families that practice negative life. Besides lack of proper control and guidance of parents also the main factor that influence the youth to stuck in such negative symptoms.

Parents should carry out an important role in cleaning up the vandalism.

They need to monitor the activities of their children sotheir kids won’t involve in any of the negative symptom. Not only that, but mixing their children should also be monitored in order to make sure their kids choose their right friends and partners. Moreover, parents should show a good example of behaviour for their kids. This is because,kids learn a lot from their parents when they are in the growing up period.

Plus, religious knowledge can become a major fortification in preventing young people from influenced by negative elements like vanadalisme activities. If parents are able to fulfill their roles properly, surely vandalism can be overcome easily. Next, members of the community can play a vital role to provide an understanding of how bad moral vandalism. The school should provide advice and guidance to students about the importance of public property through counseling session or motivation programmes.

Younger generation should be explained in detail about their responsibility towards public property. Explain to students about the rules and laws and also the punishments applied for doing vandalisme. This will surely help to develop their awareness toward public property. Last but not least,vndalisme can also be overcome by having CCTV in each building especially in schools. Security guards are used to deter violence and behavioral issues,but their presence is not enough. Security Guards aren’t physically able to be in all places at all times.

Therefore, Surveillance cameras are proven to help prevent violent acts including vandalism . Also, surveillance cameras with infrared technology can identify activity at night allowing the CCTV system to record during the nighttime hours to spot and record unusual activity such as break-ins and vandalism. “The intent is always to deter that type of behavior, and that’s one of the benefits of cameras” , says Peter Pochowski, Secretary at the National Assoc of School Safety & Law Enforcement Officers 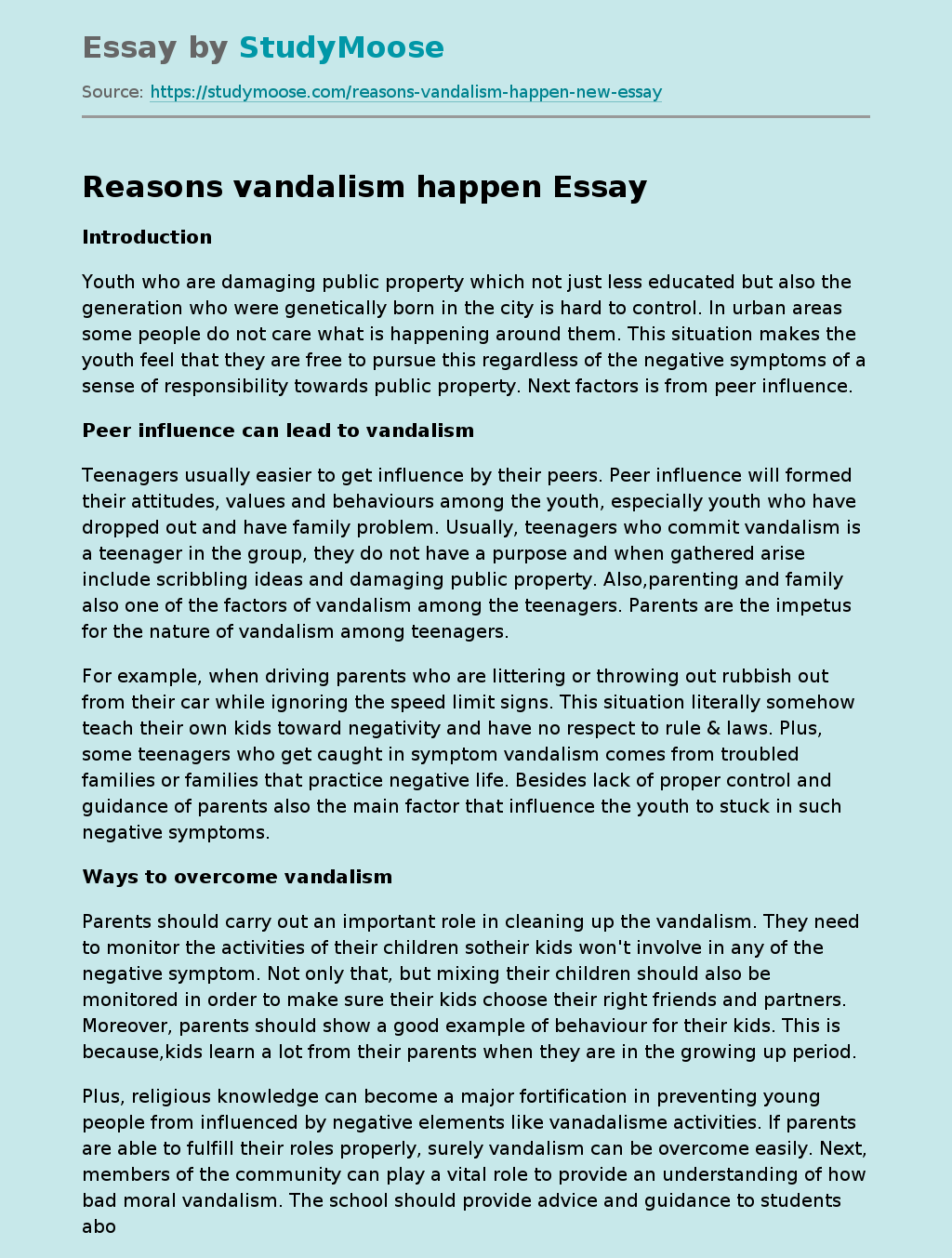