The novel Thirteen Reasons Why is a young-adult fiction by Jay Asher. According to Goodreads, he was born in Arcadia, California on September 30, 1975. He grew up in a family that encouraged all of his interests, from playing the guitar to his writing. He attended Cuesta College right after graduating from high school. It was here where he wrote his first two children’s books for a class called Children’s Literature Appreciation. At this point in his life, he had decided he wanted to become an elementary school teacher.

He then transferred to California Polytechnic State University in San Luis Obispo where he left his senior year in order to pursue his career as a serious writer. Throughout his life he worked in various establishments, including as a salesman in a shoe store and in libraries and bookstores. Many of his work experiences had an impact on some aspect of his writing. He has published only one book to date, Thirteen Reasons Why, which was published in October 2007 by RazorBill.

He is currently working on his second Young Adult novel, and has written several picture books and screenplays. Thirteen Reasons Why has won several awards and has received five stars from Teen Book Review. It also has received high reviews from fellow authors such as Ellen Hopkins, Chris Crutcher, and
Gordon Kormon. (Jay Asher, n.d.)

According to Shmoop, Asher himself had confronted the issue of suicide when a relative of his took their own life. An audio tour of King Tut’s tomb inspired the novel’s unique multimedia format.

And finally, an icy Wyoming road inspired the suspenseful plot. (Interview in source.) Put it all together and you get a phenomenal novel that won pretty much every award out there. Including the Shmoop-loves-it award.

Clay Jensen, a peer of Hannah, is a shy student who is described as the “perfect guy.” One day, after school, Clay receives a box sitting in front of his door. Inside the box, Clay discovers seven tapes and a map by Hanna Baker, who was a regular high school student. However, one day Hannah decides to commit suicide. She believes that she has no needs to live anymore. The novel Thirteen Reasons Why is narrated by two characters: Hannah and Clay. Before Hannah dies, she had recorded tapes for the thirteen reasons why she decided to commit suicide. Hannah gave instructions to the first tape listener to pass down the tapes when he or she is done listening. The first person who played a role in Hannah’s death was Justin Foley. He was the first kiss Hannah had. Freshmen year of high school, Hanna had a crush on him. However Justin exaggerates the kiss he had with Hannah. Hannah was new to her high school and since Justin lied about his kiss with her, this creates a negative impression about Hannah. Justin appears in the tape two times. The second reason he appears is because at a party with Jessica Davis, she leaves her in a room and Jessica gets raped. Hannah was hiding in the closet and viewed the tragic event that happened to her friend.

After the negative reputation, Alex Standall adds on the reputation making everything worse. During class, Alex creates a Who’s Hot and Who’s Not list and under the hot column, Hannah is marked with the “Hottest Ass in the Freshman Class.” On top of the exaggerated kiss gossip with Justin, Alex decides to create the list where the whole school figures out. Hannah starts to become the object of sexual harassment, the sexual icon. Due to Alex and Justin, Hannah becomes to build a bad reputation at school. Students begin to create rumors about Hannah and the amount or rumors increase until Hannah is no longer able to handle all the rumors. Jessica Davis, Alex, and Hannah were all once friends since they were new to the school. However since Jessica was not under the hot section of the list, she is jealous of Hannah. Jessica liked Alex but thought Alex like Hannah. Jessica and Hannah would be able to talk about different stuff, however Hannah was betrayed by Jessica. Jessica believed that the rumors were true, therefore starts to create a distance between herself and Hannah. One day Hannah notices that Tyler Down has been at her window peeking in and taking photos of her. Courtney Crimsen, a popular student decides to help Hannah. Tyler stole Hannah’s safety at home. On the other side, when Tyler gets caught, the next day Courtney does not talk with Hannah. Courtney wants to keep her positive reputation so she acts friendly to Hannah.

On Valentine’s Day, the cheerleaders come up with a fundraising event. Hannah was listed on Marcus Cooley’s list. Marcus and Hannah were to meet at Rosie’s Diner but Hannah is there alone waiting for Marcus. Marcus shows up about half an hour later because he thought they were just joking about meeting. When they are at the Diner, Hannah goes through sexual harassment. At the Diner, Zach Dempsey witnesses the confrontation between the two. Instead of helping her, Zach makes the situation worse. Hannah’s hobby is to write poems. Through the poem, Hannah is able to express herself and reduce stress. Ryan Shaver, a member of the school newspapers shares private poems, but publishes one of Hannah’s private poem. He steels the poem of Hannah’s and published it, taking away Hannah’s pride to write poetry. Clay Jensen, the co-narrator is the ninth one on the thirteen reasons why Hannah decides to commit suicide. This is the most significant section because Hannah could have survived from her pain. Clay had a secret crush on Hannah and Hannah fell in love with Clay.

However, Hannah was unable to manage her emotions towards everything and acted cruelly to Clay. Unlike the other characters, Clay is on the list because Hannah regrets not being able to know Clay. On the other hand, Clay feels guilty not being able to be on Hannah’s side. At a school party, after Hannah kissed Clay and pushing him back away, if Clay did not leave, Clay keeps believing that Hannah would have had a reason to survive. Clay goes through all the points that are listed on the tape to have a flashback of Hannah. Clay regrets and suffers through guilt. After the party with Clay, Hannah is walking back. Jenny Kurtz, a cheerleader spots her and asks if Hannah needs a ride since Hannah is drunk. Jenny hits a stop side and resists to contact anyone. Hannah gets kicked out of the car and witnesses an old man getting injured and the death of a high school student peer. One night there was an after party of Courtney’s and Bryce Walker had invited her. She did not want to go to the party because Courtney was hosting it but then decided to go as the last party Hannah would attend.

At the party, Hannah engages in a manual sex with Bryce. After this activity Hannah forces herself to conclude to committing suicide. The last person Hannah relied too was her English teacher and counselor. She hesitates to ask the counselor for help but goes to him. Hannah does not easily discuss the events that occurred to make her life miserable. However after the counselor asking questions, Hannah speaks up. Though she is at the counselors, she does not gain any advice. When Hannah leaves the office because of anger, the counselor does not stop her. This is when Hannah figures out it is the correct decision to commit suicide. Through the tapes, Hannah expresses her pain, thoughts, and expressions towards each person. She explains how each reflected a reason to take Hannah’s life away from her. Through the tapes, Clay realizes that nobody knows what will happen to someone, therefore each person should be cared with love. At the end of the novel, Clay approaches to talk to somebody he met but never talked to. Clay is able to learn through the tapes (Hughes, K., n.d.).

After reading this novel, I realized that it has always been in human nature to search for reasons behind what’s happening in our lives, and 13 Reasons Why has given its readers a story of everybody’s endless search for reasons and how finding these reasons is very life-changing. The novel takes us inside in the juvenile mind of fictional character, Hannah Baker, as she recalls events that led her to the decision to take her own life. As I listened along with Clay, I often found myself having the same reactions to Hannah’s story as a teenager and as mature person. It turned out to be a brutally honest exploration of both the victim and those left behind wondering why and how such a thing could have happened. All the characters, including Hannah, were left with the quest to indeed find such reasons. Hannah’s reasons didn’t come easy to her. I saw how she herself had a hard time to gain a clearer view to what her reasons were, and how those mere circumstances ended being her reasons in the first place. We saw that once she fell into a depression, every bad thing that happened to her, no matter how big or small, was magnified by her bleak outlook on life. Similarly in adults, once somebody is depressed, any small thing that goes wrong in their life can feel ten times worse than it actually is.

This situation can be worsened by the fact that we don’t have a crystal-clear idea why were depressed in the first place. Hannah Baker saw how it is frustrating not knowing such reasons and that’s where the list of her reasons started. All throughout the story, the author gave emphasis on the grave importance of reasons in someone’s life, especially in Hannah’s. It is common that people undergoing adolescence starts to ask themselves the bigger questions such as how and why. It was an eye-opener for me to see that her search for reasons was not just based on an impulsive whim, but it was based on her own desire for closure regarding her life. I found myself with the conclusion that the reason why it is in human nature to look for reasons is that we want to acquire peace within ourselves which can only be achieved when we gain enlightenment to the answers of how and why. In the novel, Hannah Baker did just that.

Thirteen Reasons Why Analysis. (2016, May 07). Retrieved from http://studymoose.com/thirteen-reasons-why-analysis-essay 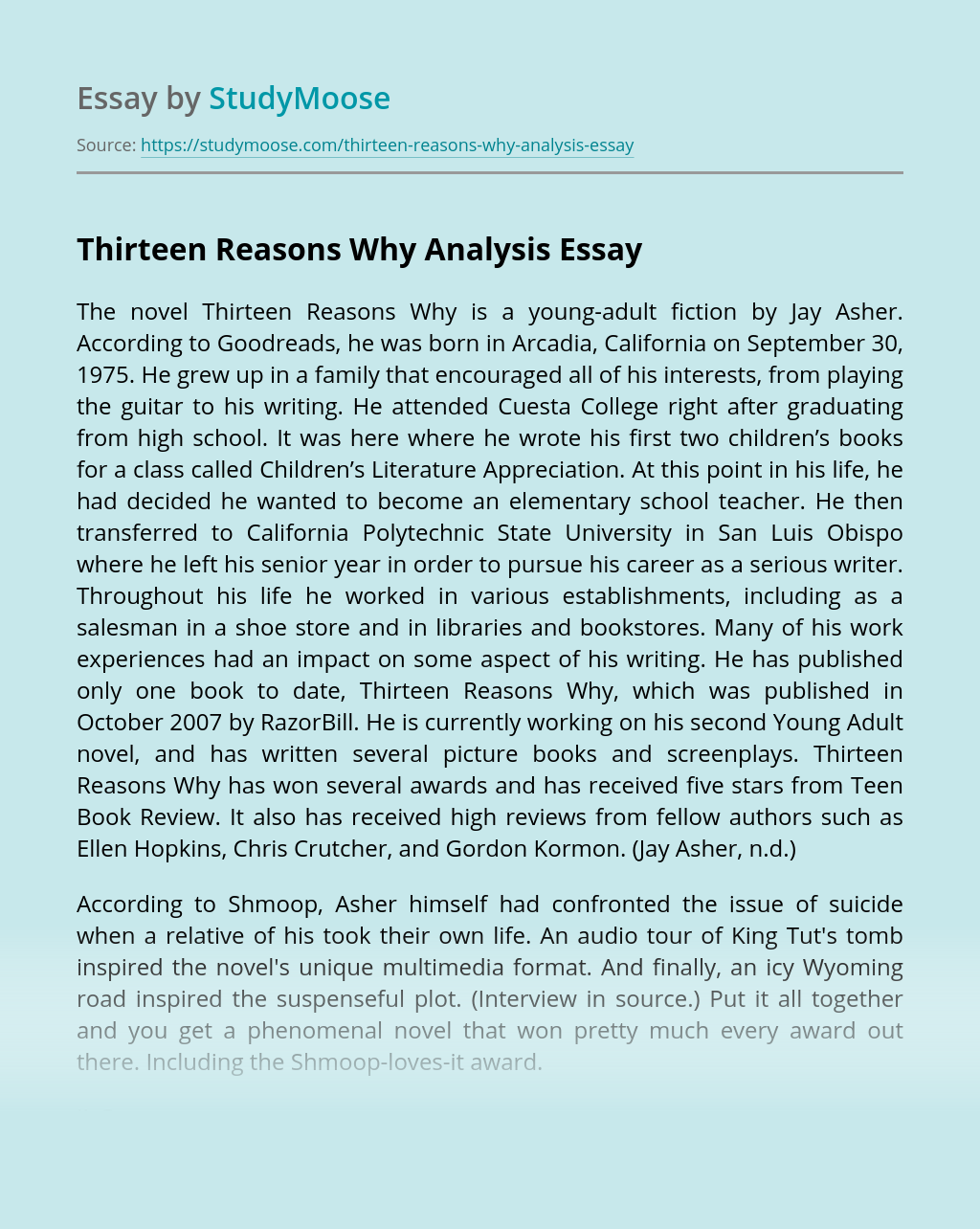 Don’t waste time
Get a verified expert to help you with Thirteen Reasons Why Analysis
Hire verified expert
$35.80 for a 2-page paper
Stay Safe, Stay Original