Graffiti and vandalism acts in our community

Graffiti and vandalism are a major blight on communities. Vandalism can lead to important services, such as public telephones, being damaged so that they don’t work, or removed, for example bus shelters, to protect from further harm. Vandalism can make the environment untidy, and graffiti can be offensive. All of these things contribute to an air of decline, and can lead to people fearing crime more.

Don't use plagiarized sources. Get your custom essay on
“ Graffiti and vandalism acts in our community ”
Get custom paper
NEW! smart matching with writer

This is often because it is against private property and the victims do not consider it serious enough to tell the police, or think that the police won’t be able to do anything about it, or find the culprit. Sometimes, the people who own the property (for example, the gas board) are based a long way away, and never see the damage to complain about it.

Vandalism and graffiti are a criminal offence under the Criminal Damage Act 1971.

The penalty for vandalism and graffiti is a maximum fine of �500 and/ or 3 months in prison if the value of damage is less than �000. The court can also make a compensation order. Possessing equipment with intent to cause damage is also an offence, and, if intent can be proven to the court, spray paint would be included as such equipment.

There are many different types of graffiti:

Tagging: this is perhaps the most frequent type of graffiti. People have their own signs, or ‘tags’, which identify them.

These are put in as many places as possible to show that the writer has been there, to mark out their territory.

‘Pieces’ are the larger pictures, more traditionally associated with graffiti. These can have some artistic merit in the correct context.

Glass etching: sometimes also called ‘Dutch graffiti’. This is where people scratch into glass, for example on a bus or train, with a sharp implement like a stone or bottle top.

Writing slogans: these are often just sprayed onto large walls, and are often designed to be offensive. They may be racist, sexist or homophobic. Other slogans may be political.

Who vandalises or graffitis?

Young people are associated with a great many incidents of vandalism and graffiti. The scribbling of names and more simple ‘tags’ are known to come from children and young people. Many use felt-tips, or other commonly available materials.

Other people are also involved – telephone boxes may be vandalised by people trying to get money out of them; political activists may write their slogans on blank walls or conventional artists may use graffiti in their art.

Why do people do it?

Here are some of the reasons why people graffiti:

Offenders gain pleasure from finishing a piece of graffiti without getting caught and then afterwards from the permanence of their work. The problem grows as other vandals follow and what started as a single ‘tag’ ends up as a wall covered in graffiti.

Young people’s eagerness to mark their territory. This can take on a more sinister form when gangs use it to stake out a claim to an area or to intimidate the local community and potential rivals.

It can be because people see nothing better to do, or they want to be daring.

Peer pressure can lead to people, especially younger people, doing things they would not normally do. This is made worse by the use of graffiti in youth culture, for example in advertising and music.

Spaces are built with little consideration for design, so that large blank walls become enormous ‘canvases’.

Problems caused by vandalism and graffiti

The problems of vandalism and graffiti go much further than the obvious costs of repairs and cleaning. It causes fear of crime and a sense of insecurity. There is evidence that people’s fear of crime is influenced by their impression of public spaces which are dingy and run down because of vandalism, litter and graffiti. Graffiti can make people feel threatened and vulnerable, particularly if it is racist, sexist or homophobic.

The ‘Broken Windows Theory’, developed in America, suggests that if a broken window is not repaired, other windows will soon be broken in response to the message that no one cares. It is argued that more broken windows or greater vandalism will influence the way people perceive crime in the area and will assume that other crime is also on the increase.

What can I do about it?

Investment to tackle graffiti and vandalism has to be long-term. If it is cut back when the problem starts to improve, the problem will come back.

What can we do about vandalism?

As with graffiti, repairing the damage as soon as it is done can deter vandals from causing further damage.

When the vandalism is to property, securing empty houses with metal screens over the doors and windows can be effective, but this does advertise the fact that the house is empty and can encourage vandals. It also adds to the air of disrepair in an area, and makes people feel less safe.

Video recordings of incidents can be used to alert parents and can be used as evidence in court.

What can we do about graffiti?

Research shows that the best way to deal with graffiti and stop it coming back is to clear it up immediately. However, there are a great many websites for displaying photos of graffiti so the perpetrators may not be that worried about their graffiti being removed, as they get recognition this way. Cleaning up graffiti is something your community could get involved in. Tenants’ and residents’ groups often have volunteer ‘graffiti squads’. If yours doesn’t, why not suggest it at the next meeting?

Some councils offer free paint to people who want to paint over graffiti in their neighbourhood. You could suggest your council does this.

Another idea is providing a legal site where people are allowed to graffiti. There are mixed views on such graffiti walls or zones. There is some evidence that they bring their own problems, as graffiti tends to spread out to surrounding walls. Also, it is unlikely to stop users doing illegal graffiti elsewhere. Young people are attracted to legal graffiti zones because they don’t have to rush and don’t have to constantly be afraid of being caught. They have time to produce a good piece of work. However, most young people prefer to tag whereas the owners of the wall or site usually prefer pictures. Another problem is young people graffiti-ing on their way to or from the legal graffiti site. One project got round this by providing all the paint on site.

Innovative designs of walls, with more windows or unusual materials may help, as it reduces the amount of ‘blank canvas’ available. Even better is to have railings instead of walls where possible, as this not only limits the possibility of graffiti, but also increases natural surveillance, making people feel safer.

Where large walls are inevitable, for example around an industrial site, using murals to decorate the walls may stop people putting their own ‘pictures’ there. If public art is not a possibility, using vegetation, for example ivies and creepers, can help with stopping people graffiti. It also makes the area look more attractive.

Other ways to limit graffiti and vandalism in your neighbourhood include:

Educating young people about the impact which graffiti and vandalism have on the wider community (e.g. making people feel unsafe, costing millions of pounds a year to fix and clean up) Young people are often unaware of the cost of cleaning up graffiti or repairing criminal damage. They need to know that it is unacceptable and is taken seriously.

What can schools and youth services do?

Schools or youth groups can ‘adopt’ badly vandalised areas, such as subways or playgrounds, keeping them clean and well looked-after. These schemes work best where young people can get involved in the design or creation of the area themselves, for example by creating a mural or planting trees.

The same approach has been used successfully by targeting groups of young people who are thought to be responsible for some of the damage. Detached youth workers can make contact with the young people and establish what they would like to do instead. A practical construction project often appeals. There are many examples of successful projects where young people have taken pride in what they have created and ensured that it stays vandal-free.

What can others do to help?

Agencies owning buildings or utilities which are prone to vandalism can assess the location and design of these to see if vandalism can be reduced.
Measures might include:

Demolishing unused buildings, or finding a temporary use for them (such as a youth centre).

Relocating services, e.g. phone boxes and bus stops, so that they are closer to other facilities where they may be less prone to vandalism.

Probation service community service schemes may be able to help with repairs and graffiti removal. Under the Crime & Disorder Act, the court can require offenders to repair damage done by imposing a Reparation Order.

Graffiti and vandalism acts in our community. (2016, Jul 05). Retrieved from https://studymoose.com/graffiti-and-vandalism-acts-in-our-community-essay 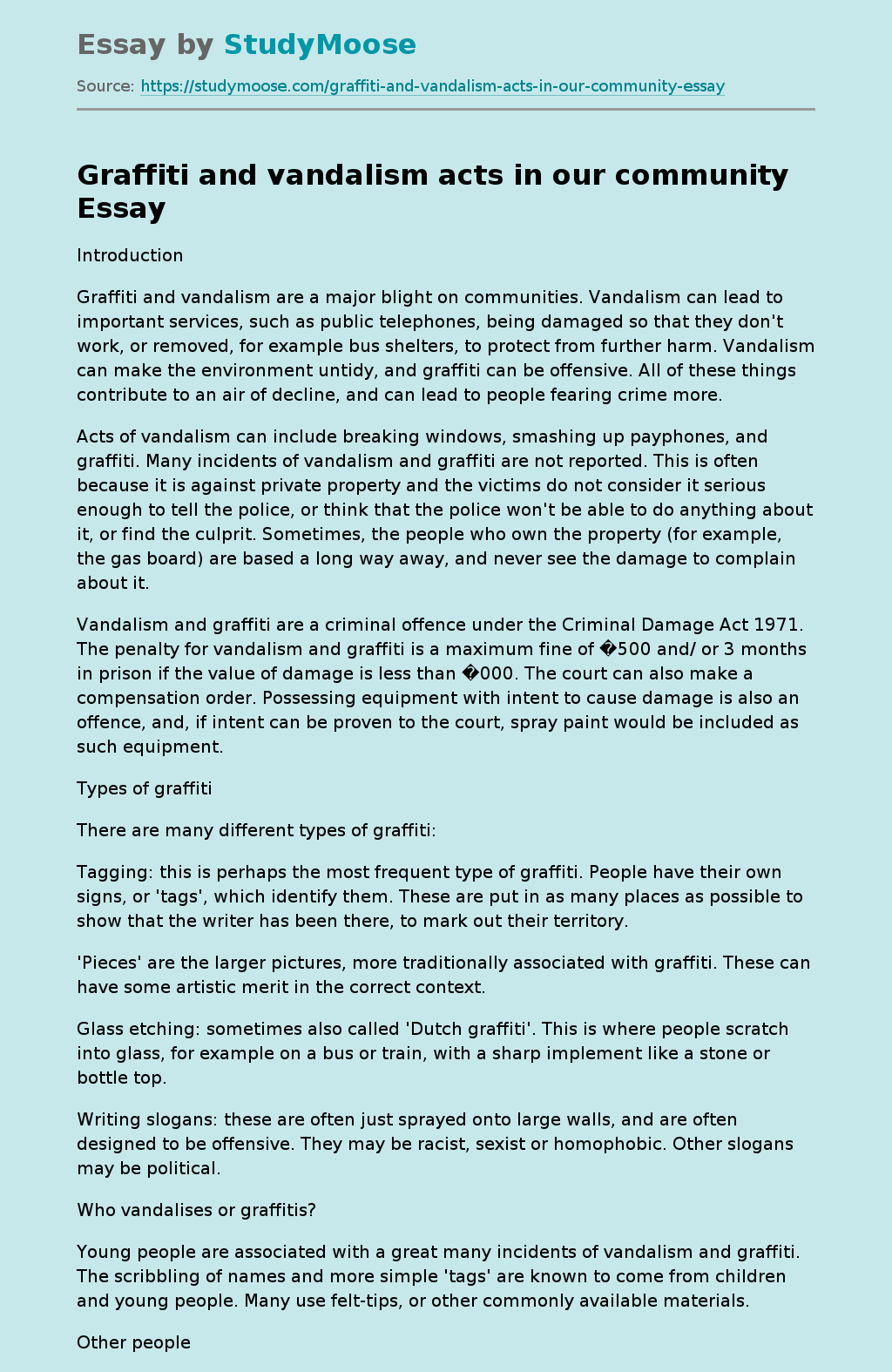