Is Graffiti an Art?

It is a debate, which is increasingly appearing in today’s society and being discussed with escalating intensity. The topic is graffiti and the debate is whether it should be seen as and art form. Many individuals will argue that it is not art and that it is uninspired vandalism. However these people do not understand the true meaning of graffiti, and what it means to be a graffiti artist. It is costing Auckland ratepayers 5 million dollars this year to fight a losing battle against graffiti in the streets.

Don't use plagiarized sources. Get your custom essay on
“ Is Graffiti an Art? ”
Get custom paper
NEW! smart matching with writer

If people take the time to appreciate graffiti and the artists it is a battle that will not have to be fought.

The facts, figures and benefits of recognising graffiti as an art form and taking action to encourage legal graffiti vastly outweigh the disastrous effects of not doing so. Firstly it is of utmost significance to outline what graffiti is and is not the reason being that the majority of people are oblivious to the difference, viewing any indecent scrawl on public or private property as graffiti and an illegal act of vandalism.

However they are mistaken. The truth is that the term ‘graffiti’ does not include all forms of writing on walls. There are three that must be separated.

Number one is the ‘tag’. It is when the artist writes his name in his own style. This is usually not considered art because it is done for purposes such as marking territory and not emotional expression. Then there is the ‘throw up’ in which the artist may use bubble letters to create an intricate design.

Lastly there is the ‘piece or ‘masterpiece’, these usually depict a scene or well known characters with some sort of slogan. This advanced form often requires the collaboration of multiple artists. It takes hours of planning and uses spray paint and felt tip pens.

Graffiti art is not uninspired vandalism. It is an art and the people who do it are artists. The definition of art is human creative skill or its application resulting in visual representation. Graffiti art fits right into this definition. Every piece has a meaning behind it or inspiration. Traditionally graffiti art’s motives stem from the dehumanization of the working class. It was a way for youth to protest the ways in which they were not categorized as people, but resources for production. However, today many artists are no longer driven by the social motive.

The creativeness and originality of graffiti art has interested many new and upcoming artists as a different way to express themselves. It interests them because it has not developed under traditional ways for artistic expression, it is new and they can appeal to a much younger and different audience. Graffiti must be recognised as art. It is on the rise all over the world. According to a report by the police, property damage has increased by 15. 3%. This was a result of increased graffiti mainly by youths. Ratepayers in Auckland are spending 5 million dollars in order to pay for the removal of graffiti on the streets.

Also in 2009 an Auckland businessman, Bruce Emery, was convicted of manslaughter after he chased two taggers outside of his home and stabbed one of them with a knife. Despite what you may be thinking at the moment, that graffiti should be completely illegal and consequences for taking part in it should be increased in order to discourage the act, you are wrong. The only way to prevent these results of illegal graffiti is to recognise it as an art form. Graffiti art is going to be ever present in our future, its popularity is on the rise and we must accept it. However it is also crucial that we promote legal graffiti art.

Providing legal walls and spaces where artists can perfect their talent is crucial. Also teaching youths the difference between legal and illegal graffiti art is very important. There are benefits for recognising graffiti as an art. It will open up new ways for artists to express themselves, especially young artists. There will be less tagging in the streets, as youths will be knowledgeable on what is legal graffiti and what is not. There will also be legal places for them to do graffiti. Ratepayers will not have to spend millions of dollars a year to clean it up.

Also the quantity of youths and adults in prison will decrease, reason being they are knowledgeable on what is legal and illegal and have spaces where they can practice the art legally. In conclusion graffiti should be seen as an art. Recognising it as art would mean a new opportunity for artists to express themselves would be available. There would be less tagging in the streets and Ratepayers would not have to spend millions for it to be cleaned up. Ask yourselves, how can something that takes such complex geometry, proportion, shading and patterning skill be written off as vandalism. The fact is, graffiti is art 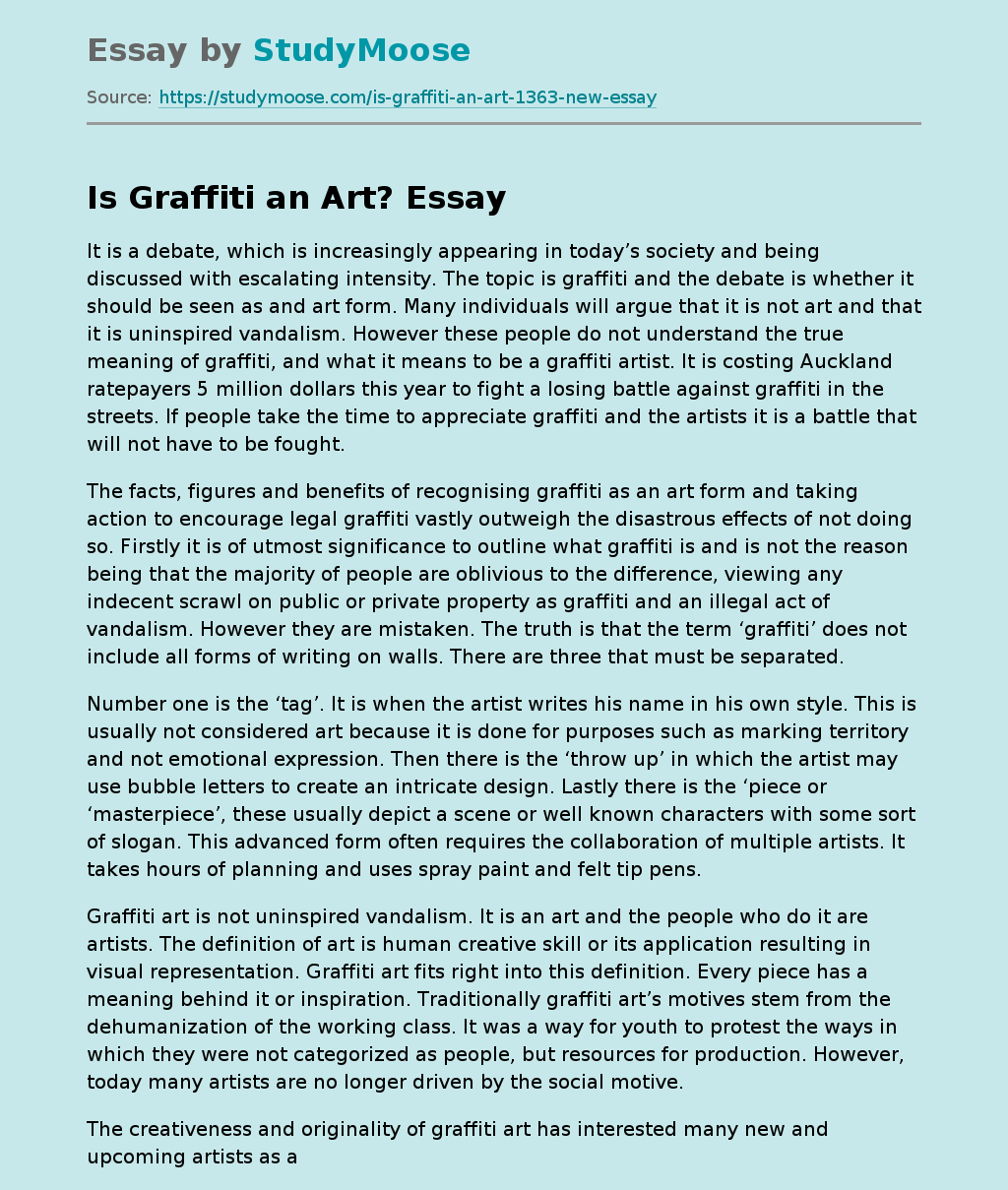