A Solution to Gun Control

On December 12, 2012, twenty children and six adults were killed at Sandy Hook Elementary School in Newtown, CT. It was one of the deadliest school shootings in US history. The shooting renewed debate on the issue of gun control. It sparked a conflict between the Executive and Legislative branches over how best to deal with the situation. Unfortunately, the gun debate tends to be a black or white issue – either you are “for guns” or “against guns”. There seems to be little middle ground.

Don't use plagiarized sources.
Get Your Custom Essay on A Solution to Gun Control Just from $13,9/Page

The media and politicians often play into the hype, making a big deal about which side people are on. There is also lot of money at stake, as interest groups and lobbyists work hard to win supporters and pressure politicians. These factors have made it difficult for anything to get down to help truly resolve the situation. I do believe that a compromise can be reached between both sides, so that positive change can take place that will prevent future tragedies.

Immediately after the Sandy Hook incident, the two sides were out making their case. With the one side of gun control stating that this incident would have never occurred if there was more gun control, while the other side felt that tightening control laws would not have prevented nor will it stop something like this from happening again. Within hours of the shooting, President Obama made a television statement in which he said, “we’re going to have to come together and take meaningful action to prevent more tragedies like this, regardless of the politics”. Then four days later at the memorial service in Connecticut, the President said he would “use whatever power this office holds” to prevent similar tragedies. On January 16, 2013, the President announced that he signed twenty-three executive orders and was proposing twelve actions for Congress to pass to further gun control.

Congress also took some action on the issue and voted on two pieces of legislation. On January 24, 2013, the Assault Weapons Ban of 2013 was introduced in the Senate. Although passing the Senate Judiciary Committee, the bill failed by a vote of 60 to 40. The other piece of legislation that was proposed during this time was universal background checks. The Manchin-Toomey Amendment was put to a vote that would have required background checks on most firearms sales. On April 17, 2013, the Senate voted against this amendment. In fact, the last major piece of gun control legislation to make it into law was the assault weapons ban of 1994. Ironically, the ban was only temporary and expired in 2004. Repeated attempts to renew it have failed. In spite of the increased and heightened emotion following the Sandy Hook incident, no additional gun control legislation was made into law. This fact shows just how divided and how little room for compromise exists on the matter.

The people for and against gun control make up one most divided groups on a policy issue. The feelings they both have are strong and are deeply held. On the side for gun control, the argument is that if guns were more difficult to obtain, there would be less violent crimes being committed. One of the pro gun control facts is that more than half of all murders in any given year are attributed to gun violence. With stricter laws, less people would have access to these weapons. Simply put, with no guns…no one can be killed with a gun. The anti gun control people also have a compelling argument. They stand firmly behind the Second Amendment, which is the right to bear arms. One of their statistics is that the USA has the most heavily armed civilian population by a large margin; however, we are not even in the top 20 in our gun murder victims. They say that guns are not the problem, the people are the problem.

They feel it should not be difficult or impossible for a law-abiding citizen to buy a rifle for hunting season, or a pistol to protect their family. They feel that gun control laws will not stop the wrong people from obtaining weapons, so the problem is not going to be solved by simply creating more gun control laws. With the millions of people who live in the United States, it is an impossible request that everyone agree. Especially if our politicians continue to only propose “all or nothing” solutions. I believe that there is a solution to this problem, and that more needs to be done to try and stop the senseless killing of innocent people. Although nothing is foolproof, we must try to do all we can to prevent another Sandy Hook. There is too much carnage and damage that someone can do with the assault weapons and high capacity magazines available today. We already have many good federal and state laws on the books regarding guns and gun control.

Unfortunately, they are not all being followed or properly enforced. We should start there. One change I would make is to standardize gun registration across the nation. This is currently a state issue and each state has different standards and procedures. Doing this would have many benefits. First, it will make it much easier to follow and implement the laws already in place. By standardizing the procedure, you can then more easily create a national database with this information, which can be accessed by each state. I believe this process would help to prevent smuggling between states. In order to gain the support of the pro gun group, this process cannot overshadow state laws on gun ownership. Another possible solution I would make involves the design and manufacture of firearms. Gun manufactures have done very little to make their products safer. I believe we can pressure gun manufactures, as we have done with other manufacturers of consumer products, to make their products safer and less likely to discharge accidentally.

An example of increased safety due to changes in design and manufacturing is the automobile. The technology currently exists that would instantly make guns safer for the public. There are safety devices that prevent accidental discharge. In addition, there are other devises that a gun owner could activate on a stolen gun that would render it completely unusable. For some reason, gun manufacturers have been reluctant to market or to make these types of devises available. I believe these are two possible solutions that could break the gridlock and make a positive impact on this problem. Gun control is one of the most hotly debated social problems we are facing today. Little has been done to resolve the problem due to the “all-or-nothing” legislative proposals that have been introduced. The two solutions I’ve presented would be effective because they allow both groups to claim a victory. Neither group has to totally abandon its beliefs or cave to the other side. This is a solution involving a compromise. This issue is so polarizing; I feel that little will be done if a solution involving a compromise cannot be reached. In any case, gun control issues will be around for long time.

A Solution to Gun Control. (2016, Apr 21). Retrieved from https://studymoose.com/a-solution-to-gun-control-essay 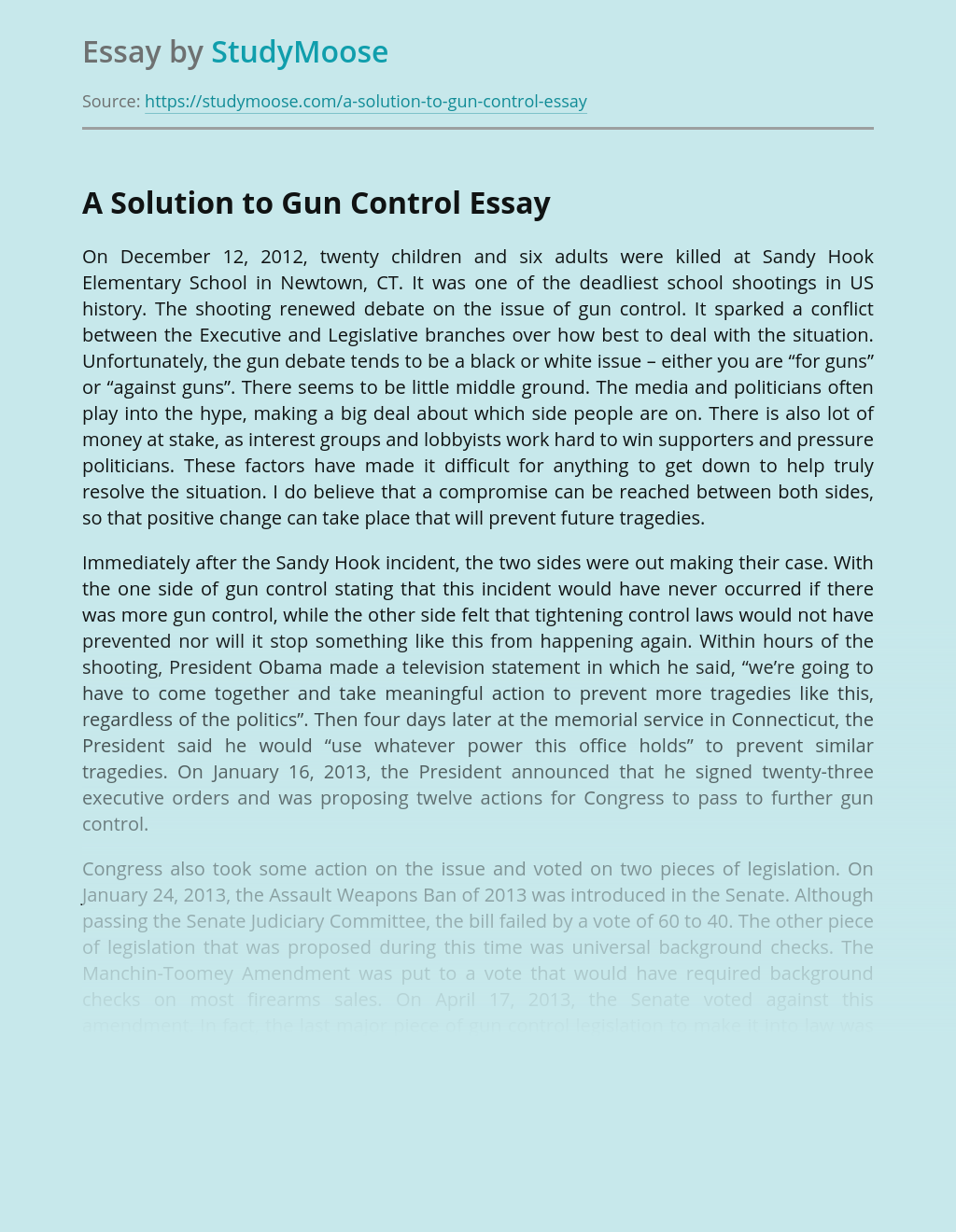 Concealed Carry Right Should be limited

Because of the establishment of concealed carry legislation by all states over the years, it has been increasingly possible for almost every American citizen to carry concealed weapons in public places. As unfortunate and horrifying gun violence tragedies like the Newtown School Shooting and Sandy Hook school shooting repeatedly occur, whether citizens should have the...

“Should Private Gun Ownership Be Banned?” Widespread gun ownership in a community could provide a general deterrent to criminal predation, lowering the risk to owners and non-owners alike. But widespread gun ownership could also lead to increased risks of various sorts, including the possibility that guns will be misused by the owners or transferred to...

Guns Should Be Banned

Handguns are the cause of so many deaths amongst the people of the world today. In the past few months there have been so many awful tragedies due to the access we all have to guns. The repercussions of gun violence make up 50 percent of today’s disasters claiming lives ranging from babies to adults...

The film “Crash” written and directed by Paul Haggis was taken place in Los Angeles. This movie illustrates how discrimination and prejudice has affected our everyday lives, due to the misconceptions we have of each other. All the characters in this movie are either victims of prejudice and discrimination or are guilty of it. To...