The Theme of Alienation in Franz Kafka's "Metamorphosis"

Metamorphosis is a change in physical form or structure. In The Metamorphosis, there is a literal change in the protagonist, Gregor Samsa’s, physical form from a man to an insect. This metamorphosis brings to light one of the major themes in the novel; the theme of alienation. Today’s society demands conformity to its norms and any individual who refuses to accept these faces alienation. Such is the fate of Gregor in the story. Before Gregor’s metamorphosis, he is alienated from his job, humanity, his family, and even his body.

Turn in your highest-quality paper
Get a qualified writer to help you with
“ The Theme of Alienation in Franz Kafka’s “Metamorphosis” ”
Get high-quality paper
NEW! AI matching with writer

The metamorphosis, however, takes the alienation to a different plane. In the story, Gregor’s job precipitates his alienation from society, his family, and himself.

Gregor’s initial alienation is from his physical body and as the story progresses we find that Gregor’s life as an insect is not much different from his life as a human. From the first few paragraphs we get the impression that Gregor’s metamorphosis has only transformed him from one body to a less convenient one.

He also thinks about how he can no longer attend work.

Gregor is a traveling salesman, and over time his continuous obsession with his job seems to dehumanize him and make him less personal, but more mechanical. He develops “a prudent habit […] acquired in traveling of locking all doors during the night” (Kafka, 497), which he brings back into his home, emphasizing the distance between him and his family. We are made to realize, however, that he hates his job. He describes it as “exhausting…irritating work” (495), and he hates having to travel so much, meeting acquaintances that never become friends, and being mistreated by his boss. He only stays in this position to alleviate his parents’ debts, and dreams of the day he can finally quit and do something more satisfying. Because Gregor can no longer work, he is alienated from the money driven economy that he lives in, where the norm is that if you are unproductive you become insignificant and repulsive. Gregor’s insect form, which precludes him from earning an income to support his family, strengthens the fact that he is now repulsive in the eyes of his family and society. His value seems just to be a financial one to the extent that family relations have been reduced to economic worth.

The idea of Gregor being just a welfare source alienates him from his family. The family only cares about the pay check Gregor hands them each month. Gregor may have been slowly changing into a recluse, but his family does not notice because their interest is in his provision of funds for them. There are points in the story where his family seems to genuinely care about his life and current condition, but underlining this supposed care is the selfish desire of his family for him to continue to be the breadwinner. For example, when Gregor’s voice through the door can no longer be understood due to his insect form, his mother becomes worried and instantly sends for the doctor, probably to ensure that he is fit to be at work. However, Gregor thinks that “people now believed that something was wrong with him, and were ready to help him” (Kafka, 502).

He does not seem to understand the real motive behind his mother’s new concern, which is that he is late for work. Gregor’s family does not know that something is seriously wrong with him until he emerges from his room in a form clearly unfit for work. His father reacts at first by clenching his fists, then breaks down and weeps. His father’s reaction transition from anger to grief is the same he would likely have had if Gregor had simply announced that he had quit his job.

Gregor’s family life after his transformation does not change drastically because his loss of relationship with the members of his family is nothing very new. It only takes his alienation from them to a new level. He is now physically detached from his family as opposed to the previous emotional detachment. He is now the burden that they have been to him and he is no longer the center of attention as the breadwinner. His family locks him up alone in his own room, and his sister, under the notion of helping him in his insect form, brings him rotten food and removes the furniture in his room driving home the fact that he is no longer human. As time goes by his family slowly become strangers to him. At one point his father bombs him with apples in an attempt to kill him. Gregor realizes how alienated he is from his family when he discovers that his father has taken up the role that he played in the family. Mr. Samsa is now a bank official and dresses in “a smart blue uniform with gold buttons” (518), and Gregor’s sister gets a job, starting a new life for herself.

The family seems to move on without him and this realization brings about Gregor’s self-alienation. His sister’s disposition to him changes from being an overemotional little girl to a bitter matured stranger, the first in the family to declare that Gregor needed to be exterminated. The fact that his family wants to kill him does not shock him – his father already tries before – but the fact that his sister was the one to openly raise the idea seems to hurt him and bring about his self-alienation ultimately causing his death. Gregor realizes that since his family can no longer communicate with him they isolate him, and his transformation makes him realize that his family has always set him apart from their group of three long before his metamorphosis. Gregor dies feeling he is no longer needed, as a salesman, a son, a brother, or a member of society.

Gregor dies of a broken heart. He is ostracized by society and his family and forced to be come a recluse. His job ultimately brings about his alienation from what mattered more in life such as building a solid family relationship, having concrete friends, and finding true love. His metamorphosis brings him to his final state to realize that his life has been meaningless and purposeless.

Gregor accepts his job thinking it will lead to a more self fulfilling future. Most people experience similar disappointments in today’s pecuniary economy, building stepping stones to a rarely achieved satisfaction but forgetting the real things that matter in life. Those who do not conform to this way of life find themselves ostracized and alienated. The Metamorphosis teaches one to balance work and family relationship, and that family relationships should not entirely be tied to economic power.

The Theme of Alienation in Franz Kafka's "Metamorphosis". (2016, Jul 03). Retrieved from https://studymoose.com/the-theme-of-alienation-in-franz-kafkas-metamorphosis-essay 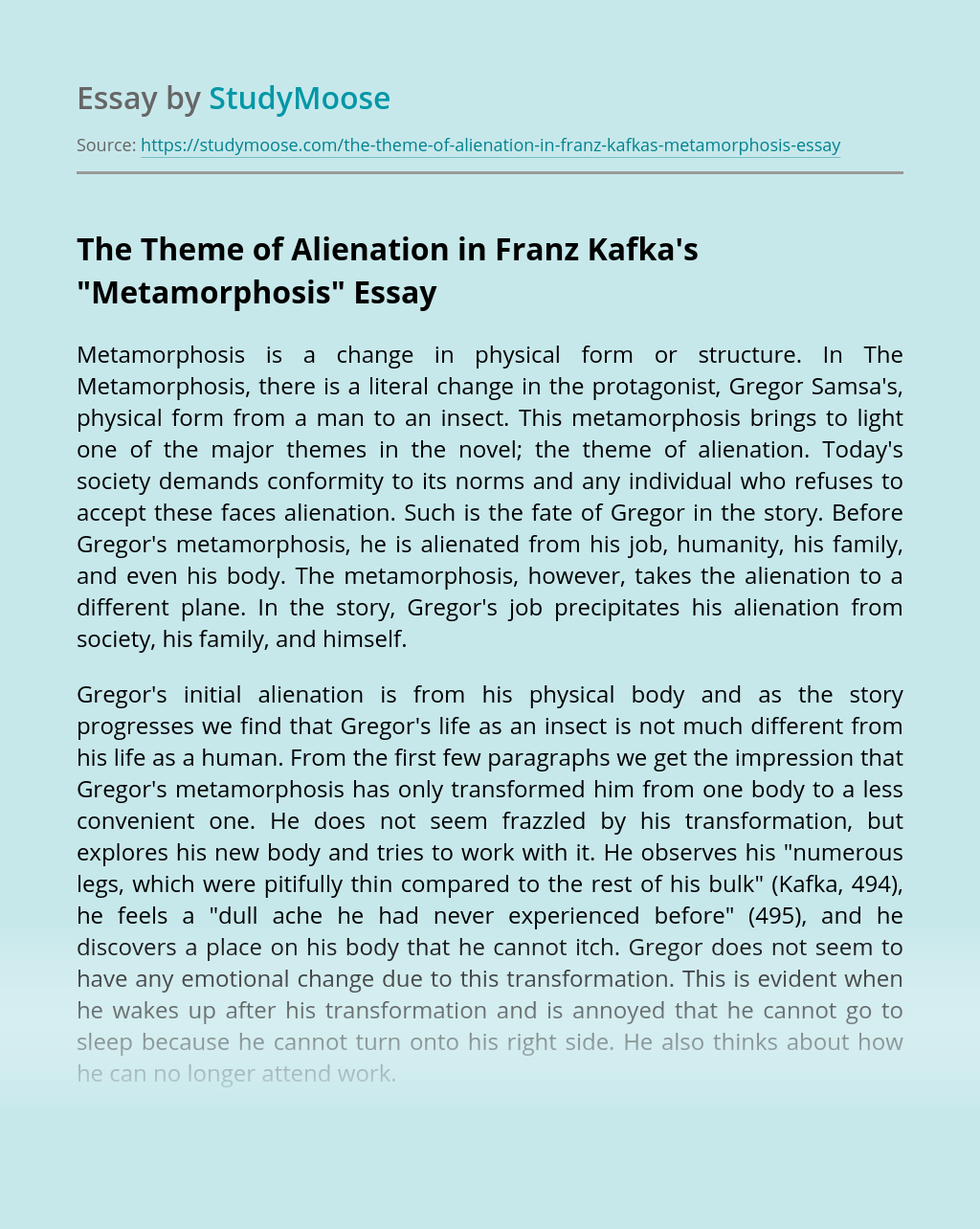 Turn in your highest-quality paper
Get a qualified writer to help you with
“ The Theme of Alienation in Franz Kafka’s “Metamorphosis” ”
Get high-quality paper
Helping students since 2015
Stay Safe, Stay Original