Straw into Gold: The Metamorphosis of the Everyday Literary Analysis

Sandra Cisneros is an amazing writer. Growing up as a shy, introverted girl, no one would have ever thought she would eventually become a successful and very accomplished author, especially since she is a Mexican woman coming from a poor upbringing. In one of her works, “Straw into Gold: The Metamorphosis of the Everyday”, she uses figurative language such as imagery, details, and metaphors to create a victorious atmosphere in her writing. Being able to do this and so many other things in her writing is what makes her an amazing author.

Turn in your highest-quality paper
Get a qualified writer to help you with
“ Straw into Gold: The Metamorphosis of the Everyday Literary Analysis ”
Get high-quality paper
NEW! AI matching with writer

The imagery Sandra Cisneros showcases in her writing reveal her ability to be able to get out of seemingly impossible situations. In paragraphs one through six, when she talks about making corn tortillas for her friends in France, she states, “Somehow though, I managed to make those tortillas, crooked and burnt, but edible nonetheless”. Even though she had never made corn tortillas in her life, she managed to make them for her friends, “crooked and burnt”, but she still made them, when other people would have just quit.

This can also be seen when she talks about writing a critical essay for her MFA (Master of Fine Arts) exam on paragraphs five and six . Because this was, “the only piece of non creative writing necessary”, and because she was not used to writing those types of essays because, “there were rules involved… unlike writing a poem or a story which [she] did intuitively”, writing a critical essay seemed to her like a very difficult thing to do.

However, like when she talks about making tortillas, she manages to finish her essay, “lopsided and crooked, but finished all the same”, which to her was a major win.

The details Sandra Cisneros uses in her essay showcase all of the ways she has been able to accomplish things in her life triumphantly that she or others did not think herself capable of. As a child in school, she never was very sociable, and if you would have ever told her teachers she would eventually became a famous author, they would have probably started laughing in your face. Why? Because in school she was, “the girl in the picture with skinny arms and crumpled shirt and crooked hair”, and her school grades weren’t that great, “in my fifth grade report card, I have nothing but an avalanche of C’s and D’s”.

Another example of this comes out in paragraph 8. Because she is a woman, Mexican, and came from a impoverished home, no one would have ever have thought of her as famous author. Also, because of those same reasons, her family would’ve wanted her to stay home until she got married, because, “in our culture [Mexican culture] men and women don’t leave their father’s house except by way of marriage”, but this was not to be. She left her house before any of her brothers did, which was considered a big “taboo” in Mexican culture.

Those are details that to anyone else would seem small and trivial; it seems like the kind of thing many would roll their eyes at and say, “Really? ” in a very sarcastic manner, but these are things that where huge for her. This was the breaking point in Cisneros’ life. If she would have listened to her family and customs and stayed, she would have never gotten where she is now, but now that she is where she is, her family feels that she has forsaken them, especially their father, who, as she describes in paragraph 10, “cries when he watches the Mexican soaps, especially if they deal with children who have forsaken their parents”.

To us, this may not be a big deal, but to her, this was a very big decision. She chose between what she wanted to do with her life and what her family wanted for her. Sandra Cisneros also uses metaphors in her essay to explain how difficult some of the situations in her life where. In paragraph four, she uses the metaphor “little armies of dough”, to refer to the tortillas. One wouldn’t usually refer to tortillas as an army, but in Cisneros’ case, the difficulty of making tortillas was almost as if she were waging a war against the dough, hence referring to the dough as an army.

To her, making those tortillas was like throwing her in the middle of the battlefield with no experience and expect her to conquer her enemy in an hour, which would be highly unlikely. This seems slightly exaggerated, but she felt that as a Mexican woman, she had to know how to make the tortillas. In conclusion, Sandra Cisneros has been able to overcome many obstacles and come out exultantly.

In her essay, she uses imagery, details, and metaphors to show us how she was able to come out of seemingly impossible situations, just like the princess who was locked in a room to turn straw into gold in the story, “Rumpelstiltskin”. With the proper motivation and hard work, you can overcome any obstacle you face. As she says in the last paragraph of her essay, “Along the way there has been straw for the taking. With a little imagination, it can be spun into gold”.

Straw into Gold: The Metamorphosis of the Everyday Literary Analysis. (2016, Sep 21). Retrieved from https://studymoose.com/straw-into-gold-the-metamorphosis-of-the-everyday-literary-analysis-essay 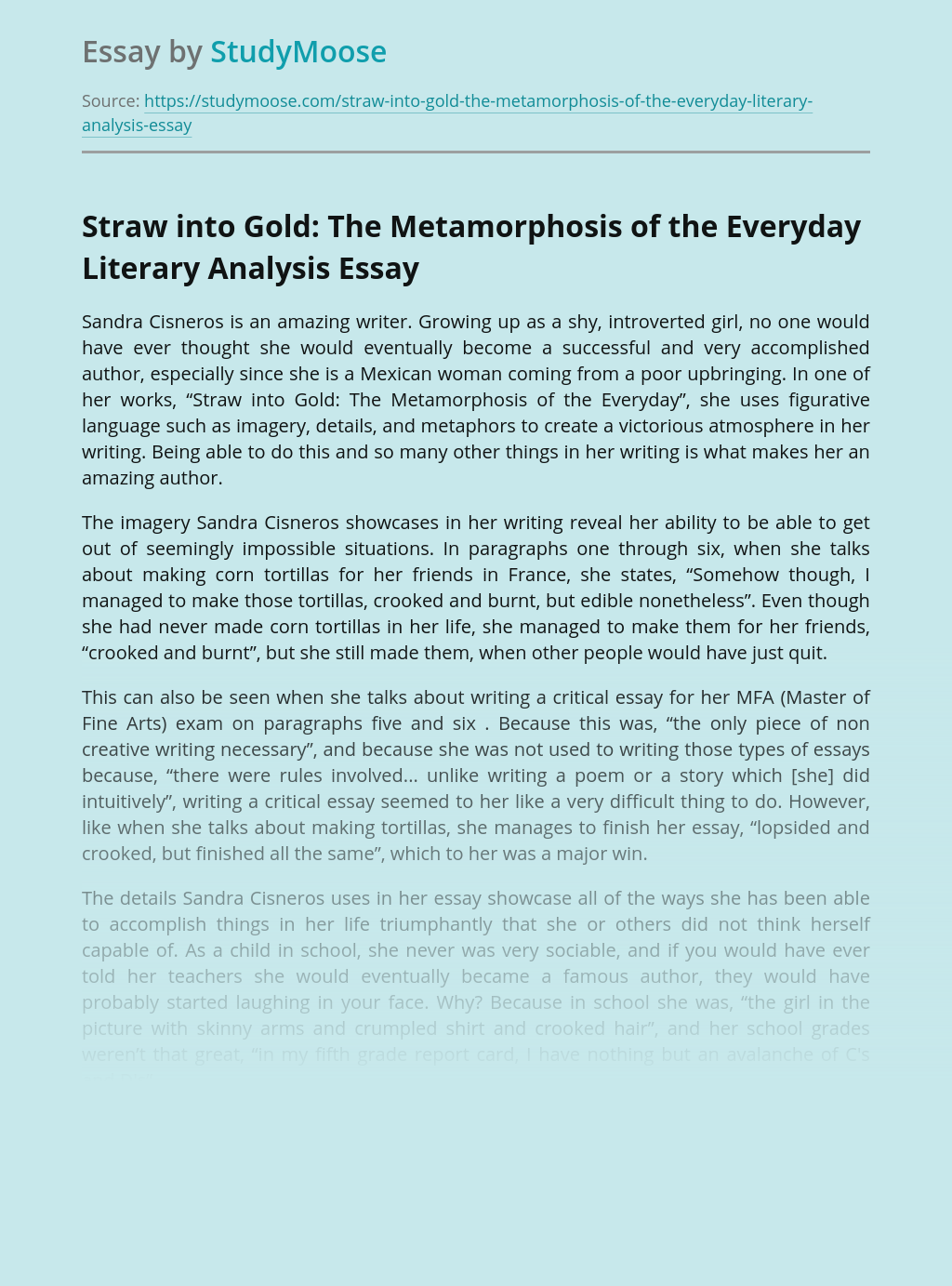 Turn in your highest-quality paper
Get a qualified writer to help you with
“ Straw into Gold: The Metamorphosis of the Everyday Literary Analysis ”
Get high-quality paper
Helping students since 2015
Stay Safe, Stay Original