In the novel, The Metamorphosis, by Franz Kafka, the author uses the omniscient narrator along with the structure of the book to reflect Gregor’s feelings through passive aggression. The narrator does not see and report things from Gregor’s standpoint, making the limited narrator not very reliable. Having the story in a third person point of view seems more ambiguous, contrary to a first person narration with an active voice and the inner mind of the protagonist. Kafka’s artistic intent of passive aggression results by having the narration in a third person perspective.

Don't use plagiarized sources. Get your custom essay on
“ The Use of the Omniscient Narrator in the Novel The Metamorphosis by Franz Kafka ”
Get custom paper
NEW! smart matching with writer

Through such narration, realistic restriction emanates the protagonist’s disabled consciousness. Even though the narration focuses on the inward characters and scenes, the tone of the narration emphasises the action of others, making the focus and the relationship appear to be outward (Kafka, 138). So the events seem like first hand accounts when they actually represent restricted reports of the events, or Kafka’s use of the passive voice.

The nature of this task however, gives Gregor an active voice so that he can explain his thoughts, feelings, and his rational, philosophical reasoning to what has happened to him and how he feels about it. The task consists of a dramatic monologue that plays the self-perception of Gregor against the view created by the omniscient narrator. A first person perspective humanizes Gregor more and makes him initiative and active so that the reader feels better towards the protagonist. The limited narrator causes a repulsion and frustration towards Gregor’s passiveness.

Kafka did not write the story from a first person outlook because it affects the submissive mood that cause the reader’s annoyance. Whether or not Gregor changes physically or psychologically, he remains the same spirit on the inside. Passive aggression led to Gregor’s alienation of himself from the family long before the metamorphosis but they both led up to metamorphosis, the climax. Symbolically, Gregor turns into a vermin since he accepts his job as a traveling salesman because the family considered his highly offensiveness since he locked himself into his room and segregated himself from the family. The Samsas obtained their freedom only after Gregor The Vermin’s death.

The focus of the main aspects and elements of the work is Gregor’s voiclessness in the events revolving around his life. Gregor’s problem of identity initiates due to his relationship between himself and others (Kafka, 140). One finds Gregor in such a dilemma because he cannot find himself or his true personality. Parts of Gregor’s personality can be seen through others outward reactions. Everything comes from the protagonist’s self-judgment, he regards nothing important to live for by himself but with others and so he turns into a vermin. Even though Gregor’s physical state looks like an insect, he still remains a human on the inside with lack of the ability to communicate with his family. Everyone around him does not realize that he still attains his human characteristics of thought, feelings, humility, a conscience, and caring for everyone around him especially his family, although they do not think he still has his same spiritual qualities as bug as when he was human. While, the Samsas keep their physical appearance as human beings, they morph into heartless monsters that do not care of their family member anymore due to his appearance. Here, lies the aspect of judging others by their guise, a psychological problem that negatively affects the society. When Gregor’s family needed him, they took him for granted and when he needs them, they push him aside because he has no use benefit to them.

The exploration of such aspects and elements are proved through Kafka’s diary, the critical essays written on The Metamorphosis, and the student’s analysis of the information to show appreciation of Kafka’s work as ingenuous and charismatic. When Gregor metamorphs, he does so out of his own sin, revenge, and desire to exploit others as well as his competence against his father to prove that he single handedly brings the bread into the house. Kafka stresses the fact of his responsibility just as Gregor’s, “… There [exists] the fighting of the vermin…that sucks the blood to sustain their own life, that is what you are…you are unfit for life; but in order to be able to settle in it comfortably, without worries…I have deprived you from [your fitness, and now it’s my responsibility, but you calmly lie down and let yourself be hauled along through life, physically and mentally”(Kafka, 111).

Gregor’s vermination highlights passive aggression versus physical aggression because when Gregor intends passively take care of his mother after she faints, his family interprets his actions as aggressive. Snapping his jaws, Gregor’s actions seem ferocious and beast-like when he intends to help. When one cares mostly about parents, friends and family, and seems to be an imposter due to his or her lack of communication, is the worst type of punishment.

Today I shall tell you anew

As you listen with strong focus

The feelings I have for all you

From my caring heart sans bogus:

Awaken to see my body

Struggling to get up, out of bed

Morph into some new laddy

So I tried to lift my hard head

Sorry am I of my tardiness

It cost the only source of money

And brings us fights ‘gainst backwardness

Without more days of sweet honey

Will you accept this new strange way?

The Metamorphosis, I ask ye?

The life I will live after today? Nay?

The Dramatic monologue shows the powerful side of persuasive poetry. The form of poetry suits poets that have a deep expressive message, like poetic propaganda. The dramatic elements and psychological implications make it an interesting form to read. The critique starts off by Gregor proposing to his family the change that has occurred to him. He asks that they listen intently in order to hear him out, and then make their judgments. For once, the Samsas, excluding Gregor, get to be the passive listeners and Gregor becomes the active character in the Drama. He shows how he still cares for them and how he retains his same soul, trying to get love from his family who practically disown him. He narrates his own struggles and apologizes for any error that he has caused. In line 13, the phrase has a change in meter to make the reader pay more attention to the words than flow of rhyme. Gregor tries not to burden his family by his transformation, he actually wants to help out even more, but does not know how. He also courteously asks that they accept him this way instead of treating him differently over a simple change in his physical appearance. The last line also does not follow the meter because the poet wants to emphasize Gregor’s wish for his family’s acceptance of him as he currently lives. He also asks posing the negative word “Nay?” because he does not really expect an immediate positive reaction from his family. The reader understands the speaker of the dramatic monologue by sympathizing with him and yet remaining aware of the moral judgment we have suspended for the sake of understanding.

The Use of the Omniscient Narrator in the Novel The Metamorphosis by Franz Kafka. (2021, Sep 10). Retrieved from https://studymoose.com/the-use-of-the-omniscient-narrator-in-the-novel-the-metamorphosis-by-franz-kafka-essay 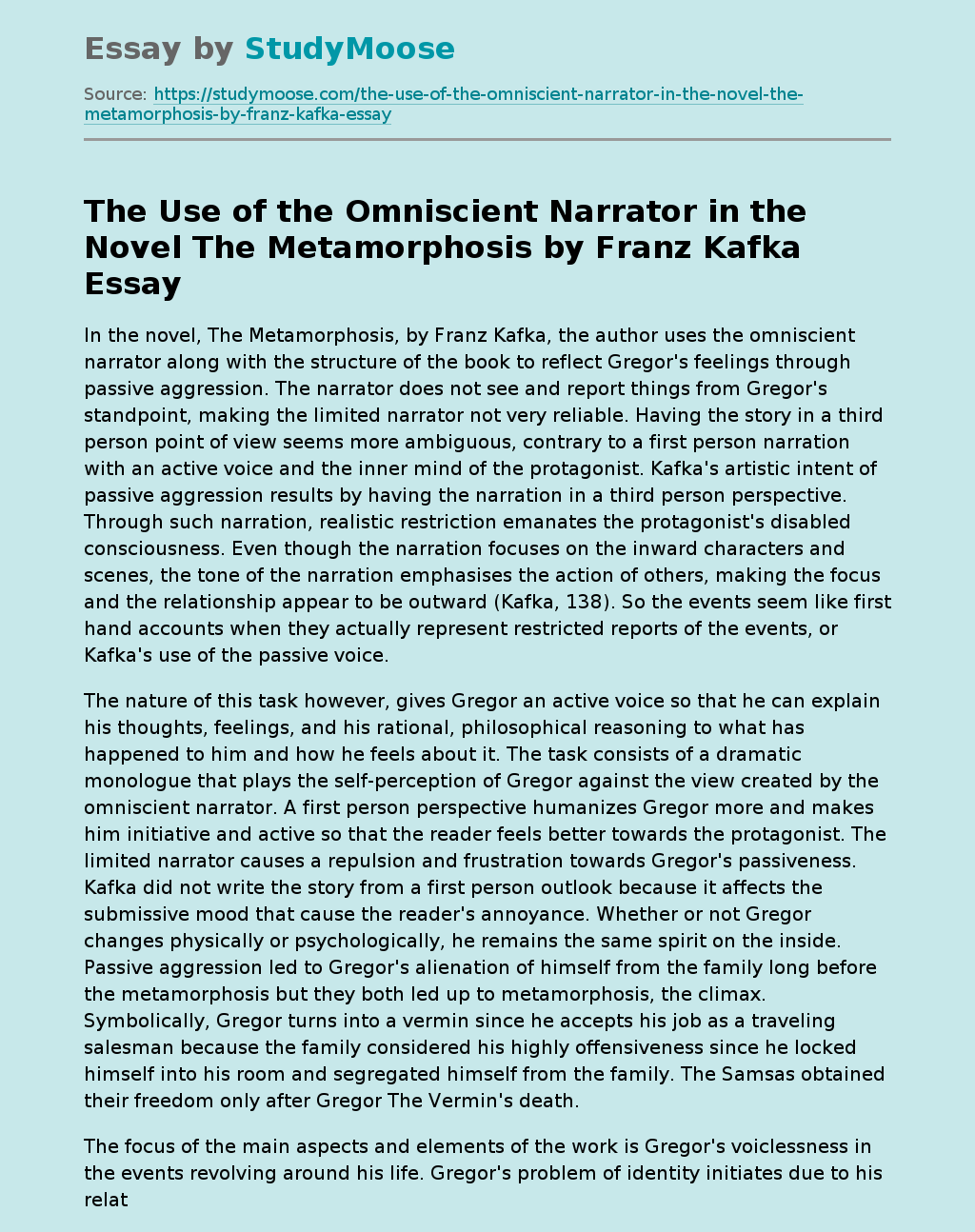