Compare and contrast the concepts of ‘alienation’ and ‘anomie’

Karl Marx first outlined his theory of alienation in The Economic and Philosophic Manuscripts (1844) and refers to a define set of social relationships that were first formed in feudal societies which then became disrupted by modern industrial society. Marx himself said when discussing the topic of alienation “The worker becomes poorer the more wealth he produces and the more his production increases in power and extent. The worker becomes an ever cheaper commodity the more goods he creates. The devaluation of the human world increases in direct relation to the increase in value of the world of things.

Turn in your highest-quality paper
Get a qualified writer to help you with
“ Compare and contrast the concepts of ‘alienation’ and ‘anomie’ ”
Get high-quality paper
NEW! AI matching with writer

Labour does not only create goods; it also produces itself and the worker as a commodity, and indeed in the same proportion as it produces goods”. Anomie however, is defined by Emile Durkheim as a change in “normalness” and a breakdown of social regulations.

Durkheim became interested in the social condition characterised by a breakdown of ‘norms’ governing social interactions. “The state of anomie is impossible wherever organs solidly linked to one another are in sufficient contact, and in sufficiently lengthy contact.

Indeed, being adjacent to one another, they are easily alerted in every situation to the need for one another and consequently they experience a keen, continuous feeling of their mutual dependence.” (Durkheim, E: 1893). Durkheim went on to develop his interest of anomie further when he began his research into ‘Suicide’, where he suggested that when a person’s ‘norms’ and rules that regulate their lifestyle become week, this can lead to a form of suicide which he called ‘Anomic Suicide’.

Marx believed that there were four degrees of alienation that break down the fundamental link that human beings have to their self defining qualities. Firstly there is ‘product alienation’ which Marx believed was alienating to the worker because the products that they produce do not reflect their creative energies and are merely objects produced by the command of the employer (Ransome, P: 2010). Which he argues was present in industrialised society but not in feudal societies as a result of capitalism and its economic gain fuelled society. (Morrison, K: 2006). Secondly, Marx said that alienation could come from ‘act of production’.

This, according to Marx is linked to ‘product alienation’ as the product of labour is alienating then so is the act of production. So in capitalist societies people have no choice but to work and feel alienated to meet their basic needs. Marx’s work stated that “The worker feels himself only when he is not working; when he is working he does not feel himself… his labour is therefore not voluntary but forced” (Marx, K: 1844). Thirdly, Marx suggested that there was alienation due to ‘common purpose’. He outlined that this happened when a worker’s social relationships become debased and they are taken from a cooperative social dimension, for example on factory lines and in open offices. Finally the fourth alienation type that Marx wrote about was ‘alienation from humanity’. Marx believed that this happened when a person worked long hour days -as Marx wrote in the Victorian society this was extremely common- and together with the three other forms of alienation; a person lost their sense of humanity and became alienated from their own inner self (Ransome, P: 2010).

That influenced suicide (Giddens, A: 2009). He argued that there were four types of suicide: Altruistic, Anomic, Egoistic and Fatalistic (Pope, W: 1976). Altruistic suicide being too much social integration, for example suicide bombers give up their life for the needs of their social group (Giddens, A: 2009). Egoistic suicide, in Durkheim’s terms was due to insufficient regulation. This can be seen in societies such as religious groups; Durkheim found that suicide was higher in the Protestant religion than it was in Catholic religious groups. He believed that this was due to the Catholic religion having a more strict regulations, so therefore people believed that it was ‘against god’ to commit suicide and also with the Catholic society being greater regulated, he believed that this closer connected society made the people have a greater sense of community and moral values so did not feel the need to commit suicide (Ransome, P: 2010).

Durkheim related the low suicide rates during World War 1 to this as he believed the face of an external enemy brought about social integration (Giddens, A: 2009). Fatalistic suicide for Durkheim was due to excess regulation. This can be seen in contemporary society in prisons as people feel that they have no sense of future or self worth. However Durkheim felt that this type of suicide was of little importance in modern society but it was of specific historical interest. Historically, this is evident in the slave communities in America during the civil war (Morrison, K: 2006). Durkheim argued that Anomic suicide occurs when rules and ‘norms’ that govern a person’s lifestyle become unstable and break down. He looked at this subject of suicide by researching the suicide rates of industrial society during periods of economic crisis created by financial recession and periods of economic change.

When taking into account Durkheim’s theory of ‘Anomic Suicide’ and Marx’s four types of alienation, it could be argued that there are several similarities between the two social theories. ‘Alienation’ in basic terms defines the relationship that a worker -mainly- has with their productive role and their self being within society. ‘Anomie’ can be suggested to relate to this similarly as it seems that it defines a person’s self being within society and themselves. However, critiques have suggested that the theory of anomie for Durkheim was not in fact in relation to a person but it refers to society, although there are definite implications of a person’s state of mind in his works (Robinson, J; Shaver P and Wrightsman, L: 1991).

When referring to the subject of anomie, social thoughts of other sociologists must be taken into account. Robert Mereton extended Durkheim’s thoughts on anomie and emphasised that an individual intensifies their anomie when they chose to discard their ‘norms’ to acquire to their intricate desires and thus anomie and deviant behaviour draw from a disjunction between a culturally prescribed aspiration of a society and socially constructed avenues for creating those aspirations (Giddens, A: 2009). Durkheim’s theory of anomie can be seen as similar to both Mereton’s interpretation of anomie and Marx’s theory of alienation in terms of isolation and disorientation.

However clearly it can be seen that there is a significant difference in retrospect to money being the source of the proletarian’s lifestyle and the theory that it keeps the ruling class on top and the rest of the population down in terms of Marx’s thought of alienation, where as Durkheim dealt with the themes of attitudes and expectations of the society within his theory of anomie and people resisting and having the choice of their lifestyle rather than being forced into lifestyles alike in alienation (Perry, R: 2007).

Looking for examples of OUR work?
Click here to see our Essay Writing Examples >

Want to know more about our services?
Take a look at our Writing & Marking Service Index >

Although Marx and Durkheim’s definitions are clearly the classical concepts of these theories, it has been suggested that contemporary society has obscured these definitions. It can be said that ‘Alienation for Marx and Anomie for Durkheim were metaphors for a radical attack on the dominant institutions and values of industrial society’. From this they take on similar issues, but in different perspectives; Marx took on the conception of the relationship between man and society and the ‘value of freedom from constraint’ through the interest of power and change. Durkheim however, was interested in the ‘transcendental value and moral constraint’ through problems with maintenance of order. When taking into account Marx and Durkheim’s research however there are critiques that need to be considered.

Many people argued that Durkheim’s research on anomie and suicide could not be one hundred percent accurate; this was because it was apparent that Durkheim used other people’s research and did not conduct his own. Durkheim used suicide statistics in Germany, however these statistics were taken by Durkheim at face value and not critiqued. Also it could be argued that Durkheim’s interdependence theory may not have been completely free from his own background assumptions and laden judgement. The main article that needs to be considered when studying suicide is “How do some deaths get categorised as suicides?” according to Atkinson, J (1978). When taking into account this question it makes one consider whether the initial research and also Durkheim’s assumptions were one hundred percent because the research was conducted across Germany, with statistics from many different coroners, who each would arguably have had their own laden judgement as to what constitutes as suicide.

So it is argued that Durkheim was taking what the coroner constituted as suicide so therefore the suicide categories are not objective facts but interpretations and meanings given to a particular event. Therefore to have done his research more accurately and to allow no criticisms Durkheim should have conducted his own research. He could have arguably done this by talking to people that have themselves attempted to commit and families of those who have, to find the different reasons behind the attempted or actual suicide (Atkinson, J: 1978).

One could initially argue that Capitalism is the main cause of both alienation and anomie. In anomie, Durkheim saw a number of indications relating to anomie in the late nineteenth century such as industrial conflict and marital breakup; which he believed was related to the industrial society and the growth of capitalism (Durkheim, E: 1893). However, Marx believed that alienation was aided by capitalism. He believed this as there was a fiercely competitive nature of capitalism that forced industries such as factories to step up their means of production and productivity, to gain economic status and power (Marx, K: 1844).

In conclusion, Alienation in retrospect means people becoming isolated from society as a result from industry and Anomie in retrospect is a change in normalness of their social status. It is clear from this that one could argue that alienation and anomie could both mean isolation to a person but however in different forms. So therefore it could be argued that alienation is isolation of a person from their economic status quo, and anomie is isolation of a human being from their social status quo and personal norms.

However from the information throughout the essay it can also be suggested that the differences between alienation an anomie comes from the status of the concepts, as alienation is said to be relate and revolve to a person singularly, where as anomie is said to describe a social group rather than one person alone. To conclude, it can be argued that there alienation and anomie have both similar and unique concepts. This is evident from the sources used throughout the essay, however it cannot be regarded completely as research or information that is

Compare and contrast the concepts of ‘alienation’ and ‘anomie’. (2016, Apr 21). Retrieved from https://studymoose.com/compare-and-contrast-the-concepts-of-alienation-and-anomie-essay 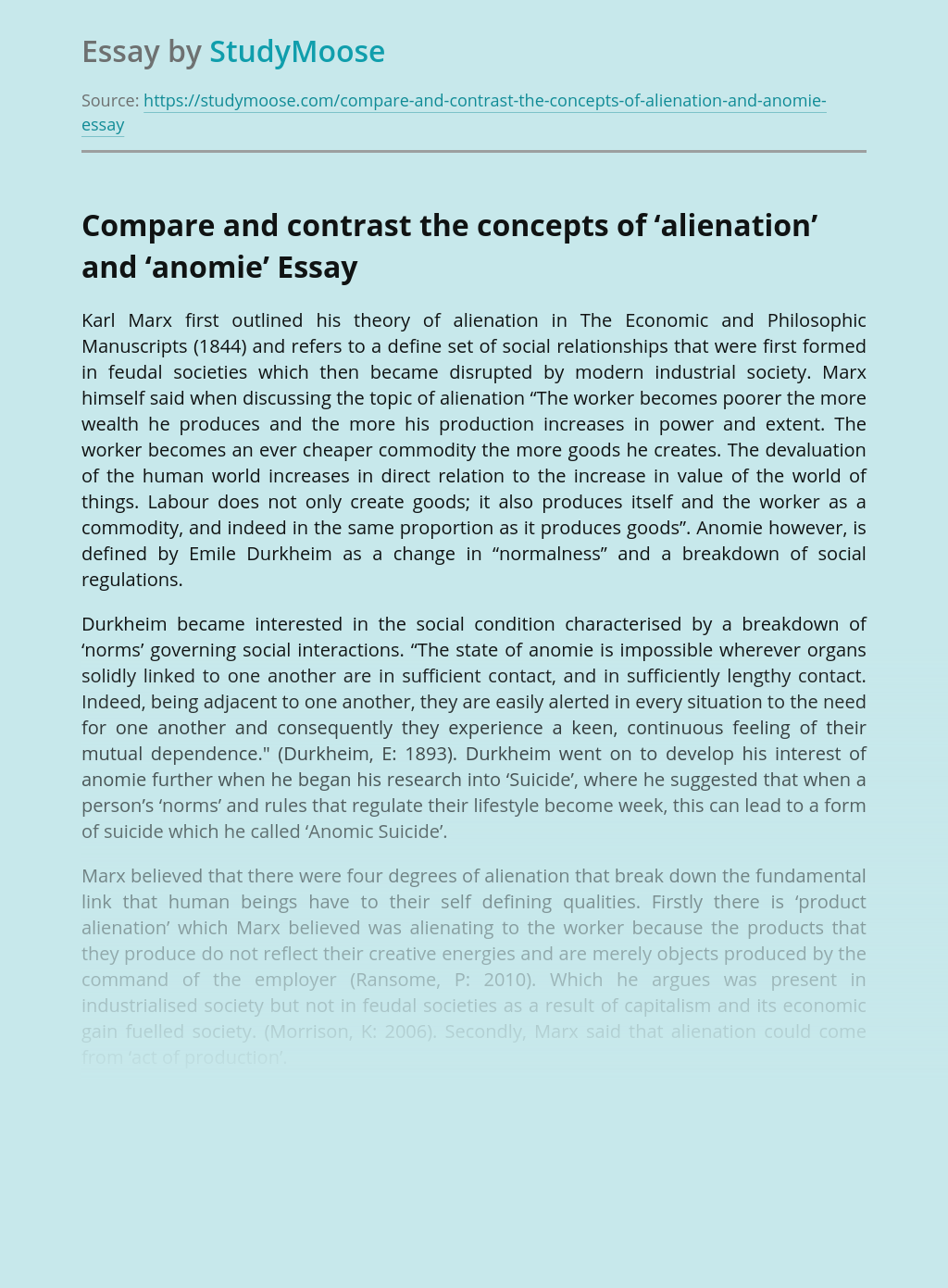 Turn in your highest-quality paper
Get a qualified writer to help you with
“ Compare and contrast the concepts of ‘alienation’ and ‘anomie’ ”
Get high-quality paper
Helping students since 2015
Stay Safe, Stay Original