The book – The Pearl, paints numerous lessons to several disciplines, but more in business because the whole story revolves the selling of the pearl and the way the different stakeholders acted through. Kino the main character, together with his wife sets out to find a pearl to get money to treat their son Coyotito who has been bitten by a scorpion. They find a big precious pearl that changes the whole goal, from treating the child to educating him, buying a rifle, and improved life standards.

Don't use plagiarized sources. Get your custom essay on
“ The Pearl ”
Get custom paper
NEW! smart matching with writer

This was quite too ambitious and so it was difficult to reach it. The pearl gives us the two perspectives about the nature of human beings.

The virtuous type of people who have love and concern, especially for their family unit and their neighbourhood and those types of people who only focus on getting richer in spite of the means they use to amass property. At the beginning of the story, Kino is an innocent contented father who cares for his family in the best way possible (Steinbeck, Wagner-Martin, and Orozco, 1994).

Proficient in: The Pearl

One point that demonstrates this is when Kino closed his eyes to listen to the song of the family song that was playing in his mind Steinbeck, Wagner-Martin, and Orozco, 1994). At the time his boy is stung by a scorpion the neighbours showed concern.

On the other hand, human nature also has a weakness, of focusing on gaining wealth and not relation. The very first picture is the one portrayed by the doctor who never visited them but concentrated on the rich families only.

As the story progresses we see the vulnerability that exists in all people, as Kino changes from an innocent loving husband to a criminal because of wanting to be rich. Here the doctor too shows the self-centeredness of people never minding, even if the lives of others are in danger. Coyotito could die but the doctor fist wanted money before treating him.

These are the two major facets of human life. This book is also very important for all entrepreneurs and established business people. All business ventures are aimed at getting wealth but business ethics calls for a balance between relating with people well and getting money from good and genuine business deals. The book centers on the greed among business men, which will make them, use unscrupulous ways of getting wealthy, a practice that is very much against business ethics. Among these are middle men who get rich from trading with poor people, giving them so little as their returns for the hard work they have done.

Kino represents the poor who work had to see their dreams, such as healthy and decent lives for their families, and education for their children (Steinbeck, Wagner-Martin, and Orozco, 1994). The middle men are the traders who had links abroad, who wanted to buy the pearl at a price that is not worth represent these greedy oppressive middlemen. It is also against business ethics that people should forget the corporate social responsibility and get imprisoned on the dehumanizing effects of gaining wealth.

Kino turned away from his neighbours, and he too focused on providing materially for his son rather than keeping focus on emotional needs as material needs follow suite. Thinking about corporate social responsibility, this story evidently paints the existence of business men and organizations, which will not see the society, which is their target market as important stakeholders that need respect, but stepping stones to get richer. The pearl fortune that came Kino’s way did not add value to his community, but made him almost an outcast of the same community. Any business venture must have the characteristics of trustworthiness.

In this, businesspeople must be honest and uphold integrity or possess fidelity in all things. The pearl buyers contributed to the crumbling of Kino’s dreams by not offering to buy the pearl at good price. In business too, people should always be responsible; in pursuit of excellence they should not be too ambitious and greedy. Kino’s was over ambitious amidst an oppressive society that would not allow him get the much he wanted from the pearl. Growth is always in small steps and Kino would have accepted to grow in wisdom from the little that he was offered. Business also muss bear the greatest sense of justice and fairness.

This is to say that every procedure should be fair, have equity in all cases and impartiality in dealing with people of all lifestyles. Consistency and equality characterizes this point. The doctor neglected the poor people and wouldn’t do his business with them. This is clear because he only came to visit Kino to treat Coyotito because he knew the pearl would pay him. Every business venture must also show the caring attitude towards the people. In this story we see Kino slowly putting his whole self and might to the pearl forgetting that he should care for the family.

Business and organizations should also value civic virtue and citizenship, which is aimed at looking at how the country as a whole will benefit from the company or the organization’s venture. They should therefore abide by the law, offer services to the community – community services, and to endeavor in protecting the environment. In the Pearl’s case, every one eyed the pearl for their own purposes. Kino’s attackers wanted to get the pearl from him in unlawful means; Kino solely wanted the peal to benefit his family and had no plans to benefit the entire community, to level best of his ability (Steinbeck, Wagner-Martin, and Orozco, 1994).

The story also shows that that those people biding for the pearl had no respect, a fundamental thing business or corporate world. In chapter four, when Kino was selling the pearl, some looked at it and rejected it as a mere oddity. The book, upon careful reflections gives us the idea about the virtuous, and the un-virtuous human nature. It also shows us specific values such as integrity, respect, contentment, community justice and impartiality, and good citizenship. By using the style of portraying a people who do not value business ethics, the book enforces in its readers a strong sense of corporate social responsibility. 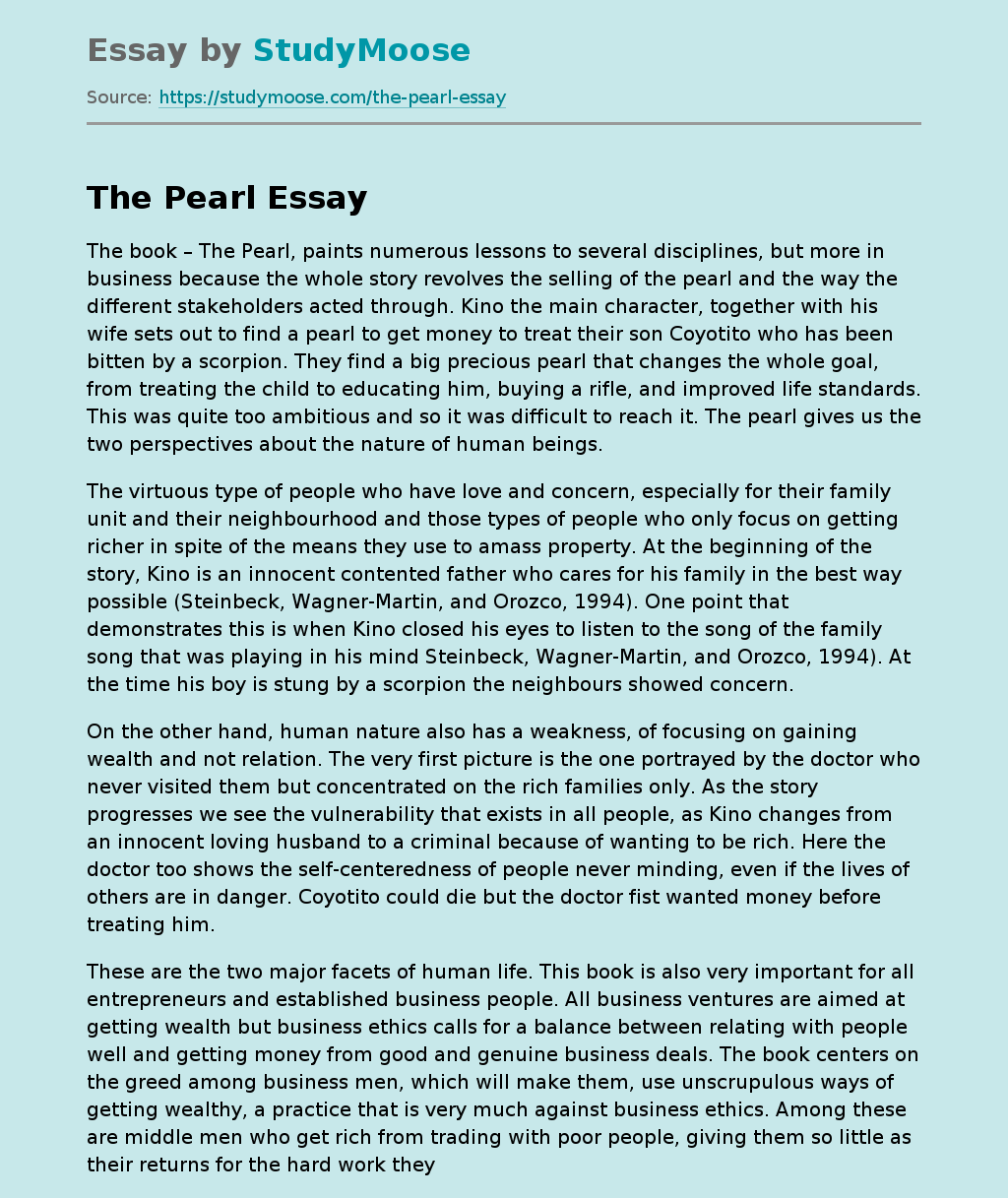