In Steinbeck’s “Chrysanthemums” and “Flight,” Naturalism plays a crucial role in the plot theme of both stories. In John Steinbeck’s “Flight,” the use of characterization, setting, and symbolism facilitates the emphasis of Nature’s dominance and the inability to escape it. In “Chrysanthemums”, naturalism comes in a different way, through the seemingly unchanging escape from Elisa’s determined gender role. Through the continued use of symbolism and characterization, Steinbeck portrays naturalism as a never changing state of being and expectations.

Don't use plagiarized sources. Get your custom essay on
“ John Steinbeck’s “Flight” and “Chrysanthemums” ”
Get custom paper
NEW! smart matching with writer

Pepe is forced to experience many difficulties as he fends off the force of nature. Pepe is lengthy and tall, which are not the traits that an ideal strong man would have. However, with the absence of a father figure, he desperately wants to become a man. His actions when murdering the man who taunted him makes him delusional that he indeed is a man. Yet his overreaction shows his immaturity and his need for development. This way of thinking foreshadows that his false sense of masculinity will be the death of him and does him no favors when confronted with the setting of his demise.

Pepe proceeds to the mountains with no resources and only his own ego for company.

The wilderness is vast and isolating. The mountains are his only safe haven but ironically the cause of his own death. When confronted by the force of nature, one human life is completely insignificant . It is not specifically there to sustain you or destroy you, it is there with an ever changing agenda.

Pepe continues in the wilderness, parched, and fending off animals while fighting infections and his mental will to live. He begins to see dark figures which symbolizes his impending doom and inescapable force of nature. The form of naturalism is no longer solely physical but begins to seize his mind as well.

Throughout Pepe’s trek in the wilderness, he begins to lose many of his father’s belongings. These belongings gave Pepe a sense of masculinity and power. However, the loss of his belongings symbolizes the stripping away of his masculinity and identity when confronted by nature. The objects he once used for a false sense of validity have been swept away and has left him as the small boy he was before. This continues to emphasize naturalism throughout the story as nature has once again continued to slowly pick away at the insignificant life, that is Pepe.

Pepe’s encounter with the wild cat also symbolizes naturalism and nature’s indifferent dominance over one’s actions. As Pepe lies on the ground, the wild cat observes him from a distance, like an omniscient being that has no empathy or reaction to his suffering. As Pepe slowly pulls out his rifle to hopefully shoot the wildcat, it walks away nonchalantly, as if not preoccupied with the fact that Pepe could have been moments away from ending it’s life. Steinbeck adds, “He looked at Pepe with cold yellow eyes, and then fearlessly walked back into the gulch” (Flight 40). This significant moment in the story symbolized once again, nature’s indifference to a human’s actions and man’s meaningless attempts to control nature. Vogel then adds, “he in the playing out of an inevitable phenomenon. He is no danger to them” (Vogel 226) to describe the inability to affect and change nature, but it’s ability to change him. This shows naturalism once again as Pepe once again stood no chance against the potential force of nature.

Towards the end of the story, Pepe dies swiftly and abruptly. This is the final blow of nature and even through his arduous attempts to survive and control nature, he is wiped from existence. Steinbeck, making his death short lived, emphasizes the force of nature and the unimportance of the human life. Just as quickly and unexpected as his death was, is as insignificant as his journey is. There was no tragic or dramatic ending to Pepe’s journey, but a minuscule event, like a blip in the water. Steinbeck adds, ”The avalanche slid slowly down and covered up his head” (Flight 48). The small avalanche is a natural occurrence in the wild, yet it was powerful to take away a human life.

Steinbeck continues to enforce the idea of Naturalism in “Chrysanthemums” through his use of Elisa’s characterization and symbolism. While working on her garden, Elisa seems to be carrying out every action with power, as if gardening was too easy and she required more responsibility to be challenged. Steinbeck states, “The chrysanthemum stems seemed too small and easy for her energy” (Chrysanthemums 2). This is the start of her want to be seen as powerful as a man, and to not be looked down upon because of role as a female. The characterization continues towards the end of the story as she showers and dresses for dinner with her husband Henry. She seems to be dressing fairly provocatively, with the intention of appearing strong and seducing, for her husband. Charles A. Sweet, Jr. supports this idea with his elaboration of Elisa’s trajectory and transformation through the story, “So far all of Elisa’s actions have been conscious and calculated to operate in a masculine world, but after the fixer speaks, her actions become less conscious and more feminine” (Sweet Jr. 211). Steinbeck does this to portray another aspect of what women’s roles were, during the time this story was written.

As the man with the caravan comes in, he challenges her thoughts of being able to do what other men do. This man with the caravan symbolizes naturalism because he denies the validity of her petitions and states that women are not made to live certain lives that men do. Steinbeck states, “It ain’t the right kind of a life for a woman” (Chrysanthemums 9). The man with the caravan believes that a women has predetermined roles that cannot be changed and will always be a certain way. The symbolism continues, as the Chrysanthemums themselves represent her aspirations of being content and liberating herself from what she believes is her anchor. As Elisa and her husband depart, she sees that the man with the caravan has tossed her flowers she so passionately assembled. Steinbeck adds, “She whispered to herself sadly, ‘He might have thrown them off the road. That wouldn’t have been much trouble, not very much. But he kept the pot’ ” (Chrysanthemums ). This quote supports the idea again the man represents naturalism and it’s indifference, because he threw out her flowers as if they were completely insignificant, and nothing could change. The flowers tossed out onto the road show the unimportance of her wants and the never changing gender roles that she is tied down to.

Steinbeck continues with his use of symbolism with the wired fence. Through the majority of the story, Elisa is stuck behind the wired fence, with no contact except for those who are on the other side of the fence. This once again further emphasizes her inability to portray herself as strong, because that is considered a masculine feature. Time and time again, men peer over the fence and look down as her, just as she believes that she is seen as not strong as a man. Steinbeck states, “He leaned confidentially over the fence” (Chrysanthemums).

Towards the end of the story, Elisa and her husband begin to speak again about the fights that her husband attends. These fights are extremely violent and are seen as a place predominantly for men. The husband offers to take her to one of the fights if she wishes, after she has previously told him she had no interest in going. Steinbeck states, “Oh, no. No. I don’t want to go. I’m sure I don’t” (Chrysanthemums). This moment in the story represents the unfortunate realization that her gender role is not to be changed and that she has come to terms with it and has accepted it as fact.

John Steinbeck’s “Flight” and “Chrysanthemums”, dive into Naturalism and the never ending force of nature. Steinbeck uses symbolism, setting, and characterization throughout both stories to convey the insignificance of the human life when compared to nature, and the predetermined and inescapable roles that are implemented by society. “Flight” is a tragic story of a boy searching for his manhood, and dying through his efforts, while Chrysanthemums is a story of a middle aged woman who aspires to not be anchored by her gender roles, but will always be who she was predetermined to be. 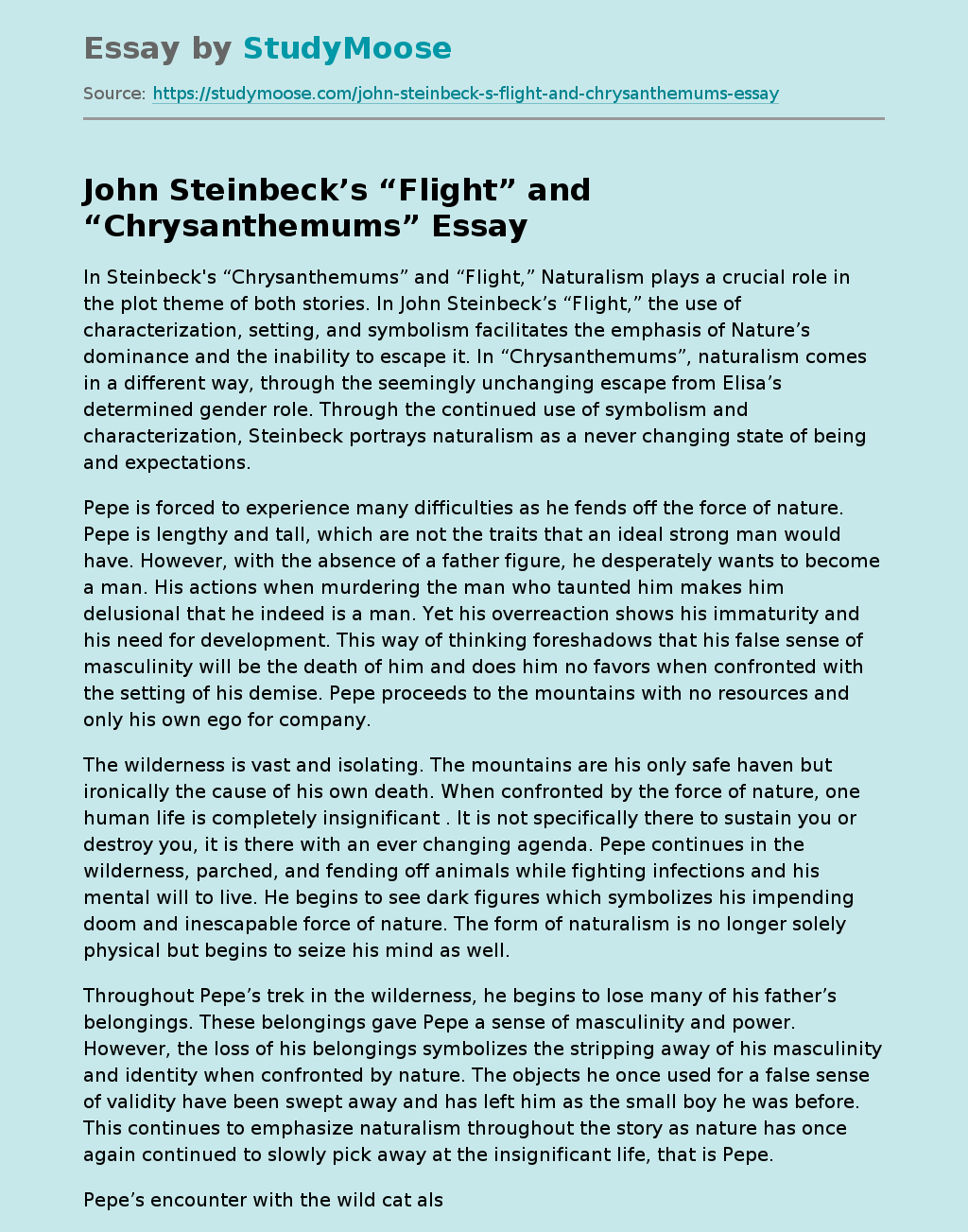