Symbolism in Steinbeck's "The Chrysanthemums"

“The Chrysanthemums” is one of the short stories of the famous American writer John Steinbeck.. Symbols are an essential part of the great short story, because they give the reader more to think about. In this essay, I would like to focus on the usage of symbols in this short story

The short story is opened by the description of the landscape in which the farm of Henry Allen is situated. I would like to write a few sentences about the setting of the story, because from my point of view it helps to create the character of Elisa Allen.

Don't use plagiarized sources. Get your custom essay on
“ Symbolism in Steinbeck’s “The Chrysanthemums” ”
Get custom paper
NEW! smart matching with writer

Allen’s farmhouse is situated in Salinas Valley, near San Jose. The valley is described as closed off from the sky and from the rest of the world.

It is December and there is no sunshine, but a fog. …On every side it sat like a lid on the mountains and made the great valley a closed pot… This description gives us the picture of a sad atmosphere of the valley.

Everyone who lives there must have the feeling of isolation from the rest of the world. In the second paragraph the narrator continues: It was a time of quiet and waiting…The life in the farm is very hard, but in this season there is not much to do. In this atmosphere of loneliness and sadness Elisa Allen starts to think about her life.

Elisa Allen is described as good-looking, very strong woman. Her face was lean and strong and her eyes were clear as water.

Her figure looked blocked and heavy in her gardening costume, a man’s black hat pulled low down over her eyes, clodhopper shoes, a figured print dress almost completely covered by a big corduroy apron… It is possible to say that this description gives us the portrait of a typical hardworking woman that lives in the farm. There is nothing written about the color of her eyes, how long her hair is or how tall she is. All the symbols of femininity are suppressed. She even wears a man’s hat! From the following paragraph we know several facts about her nature.

Her face was eager and mature and handsome; even her work with the scissors was over-eager, over-powerful. The chrysanthemum stems seemed too small and easy for her energy… Elisa Allen is very energetic, keen and impatient woman. However, she loves working in her flower garden, which is kind of work that needs patience, and she lives in quite and isolated unanimated valley. Her scissors are described in the same way as she is: She was cutting down the old year’s chrysanthemum stalks with a pair of short and powerful scissors…

The short story continues with the description of Allen’s house. …Behind her stood the neat white farm house with red geraniums close-blanked around it as high as the windows. It was a hard-swept looking house, with harp-polished windows, and a clean mud-mat on the front steps. It must take a lot of time to keep the house like this and for the woman who takes care of the house it must be really important. However, as the story moves we know that Elisa Allen is not that kind of woman.

Elisa Allen is very sensitive woman who is not satisfied with her way of life. She is married to a man who knows nothing about her. Henry Allen is very materialistic and interested only in his farming and the profit from it. …I wish you’d work out in the orchard and raise some apples that big… This is how he reacts when he sees the great chrysanthemums of his wife. It is very hard to grow chrysanthemum and Elisa seems to be extremely interested in it. However, her husband does not understand it. He does not understand her. On the other hand, Elisa does not reveal her internal desires because of the patriarchal system. It is well seen in the scene where Elisa says to the mender: “I wish woman could do such things”.

” It ain’t the right kind of a life for a woman.” “How do you know? How can you tell?” she said. “I don’t know ma’am,” he protested…There is shown that for the mender there is no need to think about it. “You might be surprised to have a rival some time. I can sharpen scissors, too. And I can beat the dents out of little pots. I could show you what a woman might do.” From these sentences we realize that men’s and women’s worlds were completely different in that time. These different worlds are described in the beginning of the short story as well. Elisa Allen, working in her flower garden…They smoked cigarettes and studied the machines as they talked…Elisa – flower versus men – cigarettes and machines. However, women’s world is not enough for Elisa.

From my point of view, Elisa Allen pays so much attention to the flowers because she is neglected by her husband. Elisa does not feel herself to be appreciated by her husband and so she takes care of her chrysanthemums, symbols of how beautiful she really is. Her gardening area is her own world where she can protect herself from anything harmful. Knowing that her husband does not show the interest in her chrysanthemums gives her the thought that he does not have interest in her.

Important part of the story is the one in which the mender arrives. Henry Allen is gone for the cattle when the mysterious man on the junky wagon appears. First, Elisa is not interested in him and she is a bit angry because she does not need anything to be repaired. “I’m sorry,” Elisa said irritably. “I haven’t anything for you to do.”… The irritation and resistance melted from Elisa’s face. This change in her attitude is caused by mender’s interest in the flowers she is planting. Then, there is a long part in which Elisa describes how to take care of chrysanthemums. According to the length of this part we can say that planting chrysanthemums is Elisa’s only hobby and the only topic she is interested in.

When this topic is introduced into the conversation, it begins to flow. Elisa not only gives her precious chrysanthemums to the nameless man with eagerness, but she also lets him know the information needed to grow them appropriately. Only because he is interested in the flowers, which means being interested in Elisa. The man says: “Kind of a long-stemmed flower? Looks like a quick puff of colored smoke?” he asked. “That’s it. What a nice way to describe them.” She now feels appreciated and attractive to this stranger. His compliment to her about the flowers leads her to feel obligated to allow him to fix her pots. In the moment Elisa finds something for the mender to do, there is no necessity to pretend the interest in flowers. His manner changed. He became professional.

Right after the stranger leaves, she is full of confidence in her womanhood and goes to do a complete makeover. I the bathroom she tore off her soiled clothes and flung them into the corner. And then she scrubbed herself with a little block of pumice, legs and thighs, lions and chest and arms, until her skin was scratched and red. When she had dried herself she stood in front of a mirror in her bedroom and looked at her body. She tightened her stomach and threw out her chest. She turned and looked over her shoulder at her back. After a while she began to dress, slowly. She put on her newest under-clothing and her nicest stockings and the dress which was the symbol of her prettiness. She worked carefully on her hair, pencilled her eyebrows and rouged her lips. In this scene she transforms from the gardener to a model; she goes through the revelation of thoughts.

She begins to be a completely different kind of woman. She looked toward the river road where the willow-line was still yellow with frosted leaves so that under the high grey fog they seemed a thin band of sunshine. The road that leads away from the farmhouse is the only place that seems to be shining. Everything around is grey and sad. The road attracts Elisa’s attention. In the moment when Henry arrives, he says: “Why – why, Elisa. You look so nice!” “Nice? You think I look nice? What do you mean by ‘nice’?”… “Henry! Don’t talk like that. You didn’t know what you said.” She grew complete again. “I’m strong,” she boasted. “I never knew before how strong.” Elisa is not like other women of that time. She is good-looking, but strong, self-confident in this moment. Henry does not understand that she has changed. He is not able to understand her.

…Far ahead on the road Elisa saw a dark speck. She knew. She tried not to look as they passed it, but her eyes would not obey… From these sentences it seems that Elisa expected finding the seeds. Now Elisa knows that she was abused by the stranger. In a moment it was over. The thing was done. She did not look back…”Now you’re changed again,” Henry complained. He took one hand from the wheel and patted her knee. Elisa becomes the woman she was before and Henry is satisfied with her change. That last sentence of this short story is: She turned up her coat collar so he should not see that she was crying weakly – like an old woman. Elisa has lost her confidence and her self-esteem to keep her head high. She becomes again a typical woman of that time. The woman who takes care of her husband and her house, the woman who is dependent.

To sum up, I would like to say that the symbols are the essential part of this short story. “The Chrysanthemums” is about the internal problems and desires of Elisa Allen. Elisa’s passion in growing chrysanthemums reflects her inner world. Her desires do not match the archetype of woman of that time. Elisa tries to follow her desires, but after a while she knows that it is not possible. She knows that she must live as she was used to. It is the story of the independent woman in patriarchal society.

Symbolism in Steinbeck's "The Chrysanthemums". (2017, Oct 27). Retrieved from https://studymoose.com/symbolism-in-steinbecks-the-chrysanthemums-essay 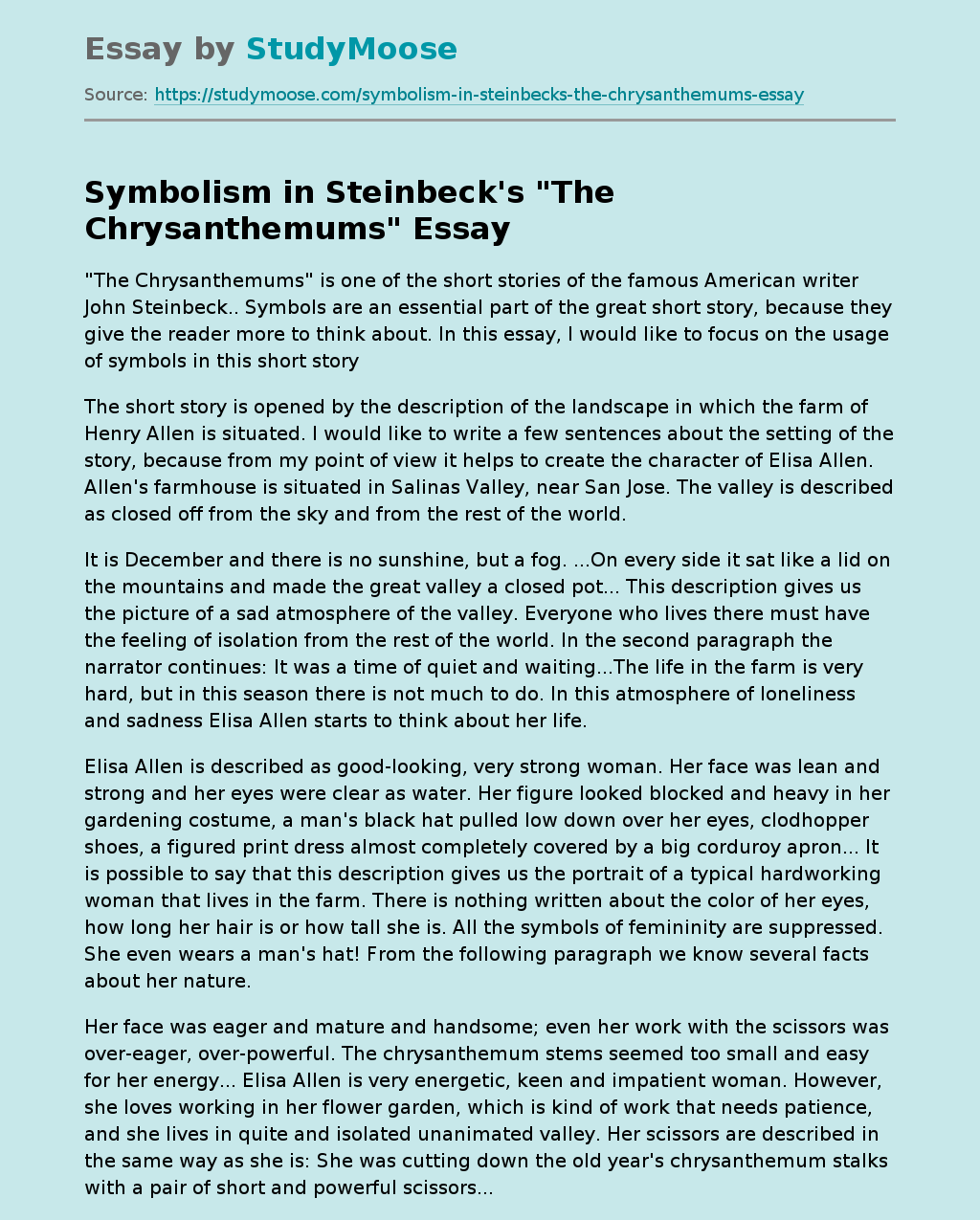