Lawrence’s Presentation of Elizabeth Bates in Odour of Chrysanthemums

Odour of Chrysanthemums is a short story by D. H. Lawrence, written in the autumn of 1909. It is set in Nottinghamshire and tells the tale of a coal miner’s wife, a young mother, waiting for her abusive husband Walter to come home. She blames his drinking for his absence. It turns out he has been killed in a pit accident. The story describes the setting before the discovery of his death and the aftermath. The main character in the story is Elizabeth Bates, mother of two and wife to Walter, the coal miner.

Don't use plagiarized sources. Get your custom essay on
“ Lawrence’s Presentation of Elizabeth Bates in Odour of Chrysanthemums ”
Get custom paper
NEW! smart matching with writer

Elizabeth, the protagonist of the story, is first introduced by Lawrence in a descriptive tone. He describes her as being a tall woman of imperious mien, handsome, with definite black eyebrows. The fact he calls her handsome, a word usually used for describing men, shows that she may carry some male qualities, such as strength.

Also, Elizabeth has smooth, black hair parted exactly. Along with her dark eyebrows, this darkness could show a stern side and her hair being parted exactly shows precision and order of which she may have in her life; a routine, a daily schedule.

She closed and padlocked the door also, which shows her need for security. Lawrence writes about Elizabeth standing steadily for a few moments watching the miners as they passed along the railway shows that she is curious to know where her husband is. She calls her son, John, and when he replies and she cannot see him she looks piercingly through the dust.

She is afraid that he is at the brook, which she had previously told him to avoid. When she sees him hiding before the raspberry canes, she was pleased and gently asked him to come inside. This shows that she is a responsible mother who looks out for her children’s safety and security. This is a major theme given off in Elizabeth’s character.

On his way into the house, John tears the wisps of chrysanthemums and drops the petals in handfuls along the path. Elizabeth says ‘Don’t do that- it does look nasty’. Chrysanthemums are a symbol in the book and her saying this indicates that she does not like the flowers. However, she picks one herself and when they get home, instead of disposing of it; she tucks the little flower into her apron. Keeping the chrysanthemum shows that the flowers have meaning to Elizabeth; this also reflects the reason as to why she finds them “nasty”, indicating to the reader that they do not hold the most pleasant memories for her. After this first appearance of chrysanthemums, Elizabeth and her father begin suspecting her husband has gone drinking yet again. The reader also finds out the fate of Elizabeth’s husband, though it is through mere foreshadowing. “Her husband did not come home.” Elizabeth channels her husband through her son when she sees him struggling with a knife and a piece of wood. She saw herself in his silence and pertinacity and the father in her son’s indifference to all but himself.

She then pieces together what Walter was doing and glances at the clock, which shows impatience and, again, curiosity. When she ventures out to strain the potatoes in the yard she again watches the men trooping home, fewer and fewer. You can tell she is getting more anxious on why her husband has not returned. We see Elizabeth’s temper when she finished her barely eaten meal rose up from the table with evident anger and exclaimed how scandalous it is for a man to not come home to his dinner and hints that he has gone to the pub while she waits. Walter seems to be a recognizable brand of “bad husband,” and Elizabeth, the put-upon wife and mother, seems to be a clear victim. Her frustration and harsh words about Walter seem fully justifiable. Elizabeth clearly sees herself as having wasted her life with Walter, missing out on a better life she could have had with someone else.

However when she comes down from putting the children to bed Lawrence describes the room as empty, which could show that her life is in fact empty without her husband. Elizabeth is certain of disaster as the story leads on, which we see from the very start. The story reaches its climax when Walter’s mother turns up at Elizabeth’s house. We see juxtaposition between Elizabeth and the grandmother. The elder woman is described to be very troubled, weeping without wiping her eyes, the tears running however stopped by Elizabeth’s directness when she said ‘Is he dead?’ We also see the difference of the two when Lawrence describes Elizabeth as having her thoughts elsewhere. She thought about the economic difficulties his death could bring upon her, and if he was hurt she was thinking of how tiresome he would be to nurse. Lastly she considers the children. The fact she shows little emotion towards the fact that her husband may well be dead agrees with the earlier point of Elizabeth being a long-suffering wife who deserves sympathy.

Her response to Walter’s death reveals that she is not as blameless for her unhappiness as she first appears. At first, Walter seems to be the clear cause of Elizabeth’s difficult life. When his death is finally reviled the old woman drops into a chair and starts to wail and weep (a typical response to such news) but Elizabeth tells her to hush and not to wake the children, appearing to not be affected. When they both heard the details of his horrific death the grandmother continues to wail and cry, and Elizabeth again tells her to be quiet and not to wake the children. This shows her maternal side, and is showing the grandmother that she is a good mother like she herself boasts about. Elizabeth’s dismal view of her fate changes once Walter’s corpse is brought home. As Elizabeth and her mother-in-law undress and wash Walter’s body, much like a parody of the two women attending to the body of Christ, Elizabeth confronts her role in the marriage’s failure.

When she looks at the corpse, she realizes that for years, she has not really seen Walter. He was her husband but distant from her, and she feels “ashamed” because she had not allowed him to be himself. Instead of feeling anger and resentment, she recognizes that her own expectations and refusals helped tear them apart. She describes her unborn child as ice in her womb, ice of fear. She has no-one to support her anymore. This may be the reason why she ‘winced with fear and shame’ from the death. The pity she feels for Walter sharply contrasts with her earlier harsh view of him, serving as an epiphany—she suddenly recognizes Walter as a human being, rather than simply a difficult burden. Elizabeth realizes she has been culpable in her own unhappiness. At the end of the story, she submits to both life and death as her “masters,” humbled by her own mistakes and about to carry on with a new perspective.

Lawrence’s Presentation of Elizabeth Bates in Odour of Chrysanthemums. (2017, May 16). Retrieved from https://studymoose.com/lawrences-presentation-of-elizabeth-bates-in-odour-of-chrysanthemums-essay 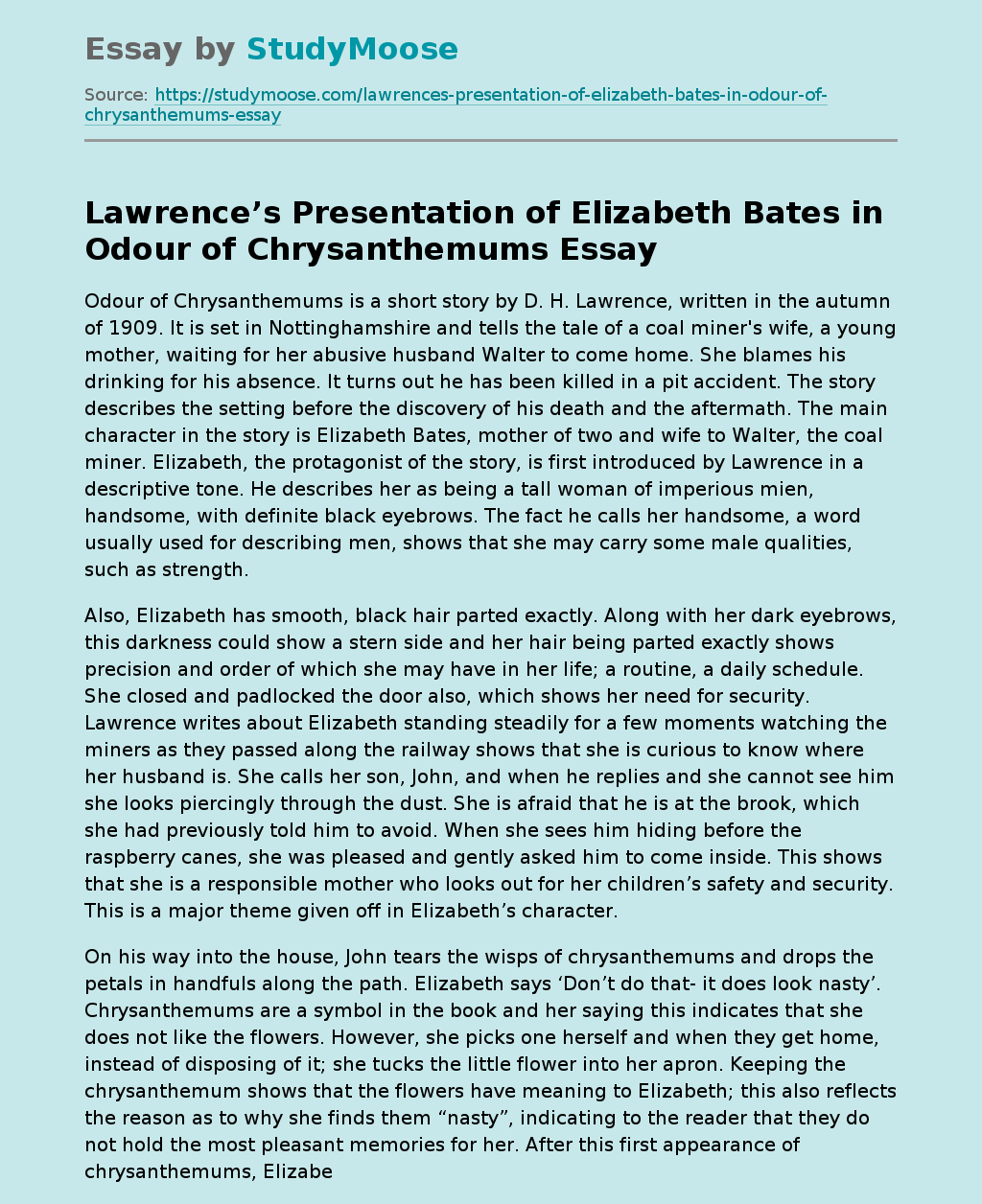