The Declaration of Independence: Assignment

Thomas Jefferson, who was chosen to draft the Declaration of Independence, had attended the College of William and Mary, which emphasized classical thinking rather than a purely theological base for education. He was thoroughly familiar with the ideas of the Enlightenment and had read the works of the French philosophers and John Locke. Jefferson based his major premise in the Declaration of Independence on the concept of the social contract and wrote a reasoned argument in support of revolution against the British government.

Turn in your highest-quality paper
Get a qualified writer to help you with
“ The Declaration of Independence: Assignment ”
Get high-quality paper
NEW! AI matching with writer

) Purpose What is the purpose of the Declaration of Independence as stated in the introductory paragraph? (It aims to justify revolution and separation from England. )* Why was justifying revolution so necessary? (The American colonies were the first ever to revolt against a mother country. ) Audience What groups did the Continental Congress hope to sway by this document? (It was specifically addressed to the king and, indirectly, to Parliament.

The Congress hoped that it would gain the support of large numbers of Tones, uncommitted colonists, and the enemies of Britain—Spain, Holland, and particularly France. Jefferson may have had a vision that the document would serve as a model for later colonies anticipating revolution and as a standard by which to judge the country’s progress toward equality. )* How do you know that Jefferson addressed the Declaration of Independence to a literate audience? (The logical structure and sophisticated vocabulary both suggest that it was intended for the elite. What other people had created a climate for revolution among the masses before 1776? (One might mention Patrick Henry. Samuel Adams, and Thomas Paine, author of “Common Sense. “) Roots What was the cause for Issuing the Declaration of Independence? (The Continental Congress had become frustrated over Britain’s “long train of abuses and usurpations” and lack of progress toward resolving differences between the colonies and mother country. ) Merely declaring independence did not gain British recognition of colonial independence.

What advantages could the colonies gain, then, by announcing their independence from England? (It gave colonists a “cause” for fighting; it raised the possibility of foreign aid since other countries would no longer view assistance as meddling in another country’s internal affairs; and it raised hopes that colonists captured by the mother country would be treated as prisoners of war rather than traitors. ) In view of the possible advantages of a declaration of independence from England, what factors caused the colonies to proceed with great caution? They were giving up the protection of the strongest nation in the world and trade advantages with the mother country.

If the government fails to protect their natural rights, the people have the right to alter or abolish their government. If Jefferson assumed the right of revolution—as no other practical politicians before him had done—what did he have to prove to justify a declaration of independence from England? (He had to prove that the British had violated the colonists’ rights of life, liberty, and pursuit of happiness. ) How, then, did Jefferson organize the rest of the Declaration of Independence? (He listed ways the British had violated the colonists’ rights to pursuit of happiness, liberty, and life. ) Why did he list the violations in reverse order, that is pursuit of happiness first? He tried to build to a climax with the most serious grievances last. )

Who is the “he” mentioned repeatedly in the Declaration of Independence? (King George III) Why did Jefferson write rather vaguely about the complaints rather than listing the specific acts of the British that had so alienated the colonists? (He described the acts in general, terms so that those in other countries or, perhaps, in later generations could understand the gist of the complaints. ) To what specific acts might each of the following refer? (These points correspond to complaints students are likely o have chosen to write about in question 5 on the homework assignment. ) a. “He has endeavored to prevent the population of these states . . . ” (The Proclamation of 1763 forbade colonists to move beyond the Appalachians until problems with the Native Americans had been resolved by the Crown. )

b. “He has erected a multitude of new offices, and sent hither swarms of officers to harass our people and eat out their substance. ” (It might refer to customs officials armed with writs of assistance. ) c. “He has kept among us, in times of peace, standing armies. . . ” (The British kept troops in Boston, for example. ) d. “For quartering large bodies of armed troops among us. ” (Britain imposed several quartering acts. ) e. “For protecting them, by a mock trial, from punishment for any murders which they should commit on the inhabitants of these states. ” (It might refer to those involved in the Boston Massacre. ) f. “For cutting off our trade with all parts of the world. ” (The Navigation Acts had closed outside trade for decades, and Britain closed the port of Boston after the Boston Tea Party. ) g. “For imposing taxes on us without our consent. (Britain imposed the Molasses Act, Sugar Act, Stamp Act, Townshend duties, among others, without colonial representatives in Parliament. )

h. “For abolishing the free system of English laws in a neighboring province. ” (It refers to the Quebec Act, which was passed at the time of the Coercive or “Intolerable” Acts. ) i. “For taking away our charters. ” (Boston lost its charter after the Boston Tea Party. ) j. “He has abdicated government here, by declaring us out of his protection and waging war against us. ” (Britain and the colonies had already fought at Lexington and Concord, for instance. k. “He is at this time transporting large armies of foreign mercenaries to complete the works of death, desolation, and tyranny already begun with circumstances of cruelty and perfidy scarcely paralleled in the most barbarous ages. . . .” (The British hired Hessian mercenaries to fight. ) l. “He has constrained fellow-citizens, taken captive on the high seas, to bear arms against their country. . . .” (The British impressed colonial seamen into their navy. )

What legal means of protest had the colonists taken to convince the British to change their ways? The colonists had petitioned, warned, reminded the British of the circumstances of their emigration to America, appealed to them, and conjured them with ties of their common kindred. )* How had the British responded to these appeals? (They had ignored them. )* What conclusion did Jefferson then draw? (The colonists had no choice but to separate from England since legal appeals had had no effect. )* How do we know that the colonists were God-fearing people? (The Declaration of Independence appeals to the “Supreme Judge of the world for the rectitude of our intentions. “) What rights of an independent country did Jefferson list? An independent country had the right to levy war, conclude peace, contract alliances, and establish commerce. )

What sacrifices were the signers willing to make to gain their independence? (They pledged their “lives, fortunes, and sacred honor. ” Signing the Declaration of Independence put the signers on Britain’s “most wanted” list. The British considered them guilty of treason, and many signers suffered considerably in the first few years of their act of defiance. Five were captured and imprisoned in each case with brutal treatment. Twelve signers’ houses were burned, and seventeen lost everything that they owned.

The Declaration of Independence: Assignment. (2016, Nov 23). Retrieved from https://studymoose.com/the-declaration-of-independence-assignment-essay 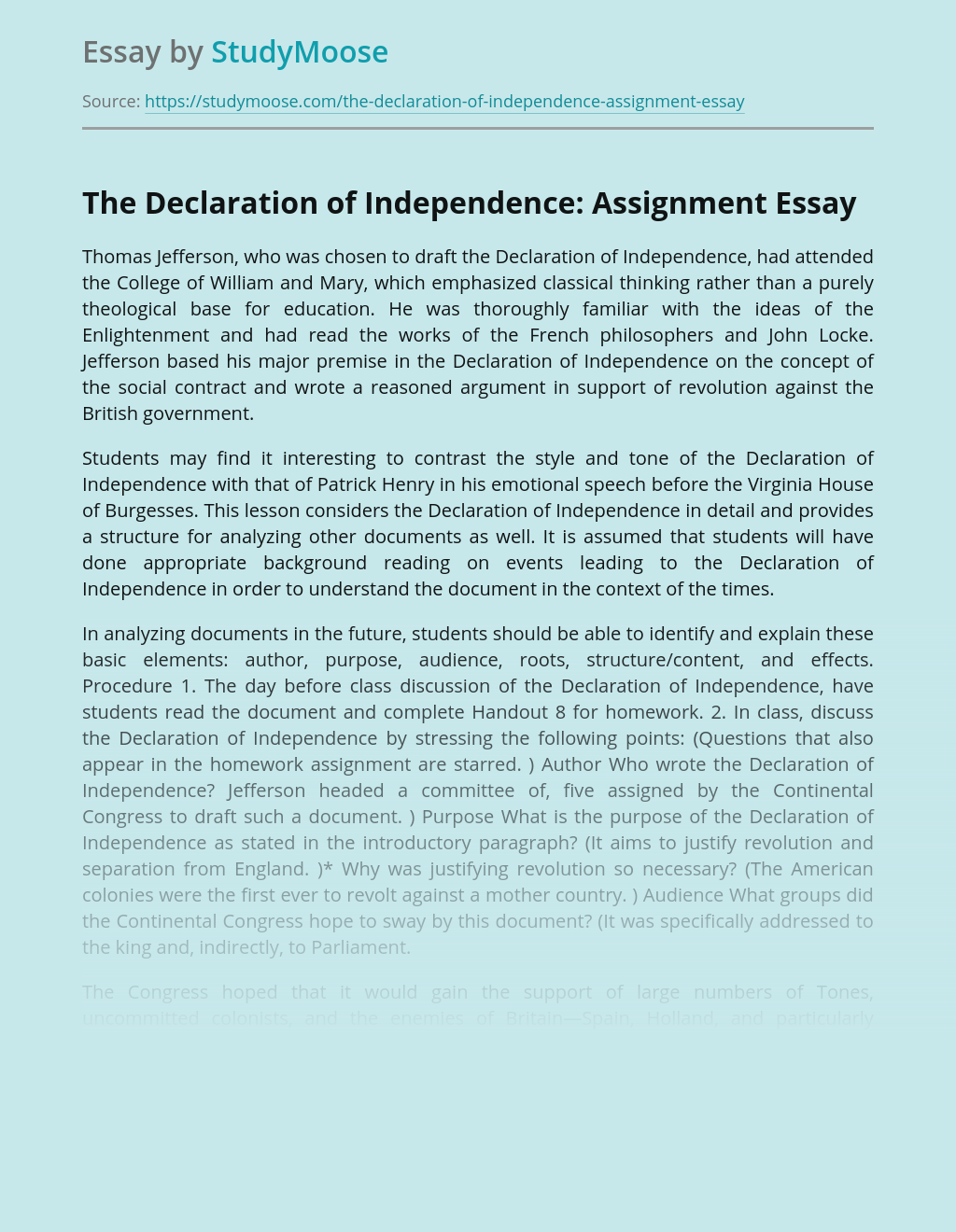 Turn in your highest-quality paper
Get a qualified writer to help you with
“ The Declaration of Independence: Assignment ”
Get high-quality paper
Helping students since 2015
Stay Safe, Stay Original